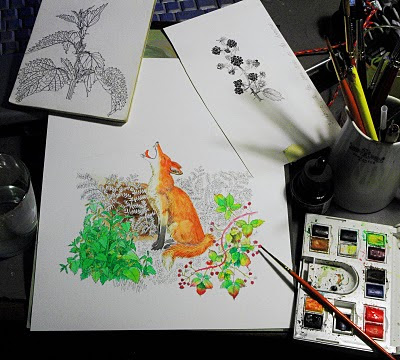 At last I've got into gear and am painting pictures, and I'm pleased with the way this one is going. It's a fox catching hailstones in its mouth. It was something that Geraldine Taylor spotted on the Zoo Banks, on the Downs. Assuming I don't mess the picture up, it'll be in the Bristol Review of Books and in Geraldine's new work-in-progress book.

There's been a lot of nature around the place lately. I walked along the Severn estuary on Sunday, exploring the bit where the railway tunnel and the new bridge intersect. 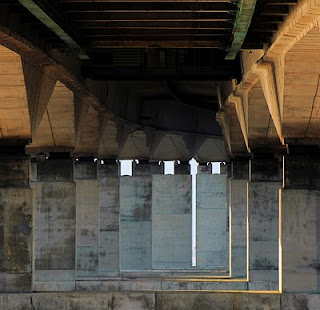 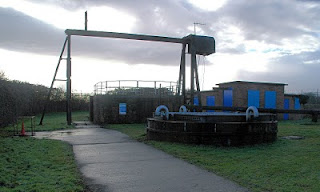 This is a shaft that was dug to tunnel outwards from, and is now used to pump water out of the tunnel. The one on the Welsh side is more impressive, because it pumps out the Great Spring, which was discovered in dramatic circumstances during the construction of the tunnel, and which has in its time supplied an ordnance factory, a paper mill, and, now, the brewery that makes Becks and Stella beer.

Anyway, the recent snows have been thoroughly washed away by the rain, and the sun shone brightly, and the birds agreed with me that it felt like spring, and were singing in a chirpy sort of way all over the place. A couple of blue tits were bobbing round in circles, occasionally performing sudden vertical climbs. Similarly, a grey squirrel in next door's garden was performing high-speed circles punctuated by great leaps into the air. Lord knows what that was about; perhaps it was art.

And the magpies in the plane tree at the front of the house have been repairing the nest where they reared their single chick last year, before it was killed by the local fox. Gratifyingly, the car parked below the nest was spattered with twigs and magpie crap. It is this car's owner who cleared the snow before driving away last week, throwing the snow onto the footpath where I had cleared the snow. Karma!