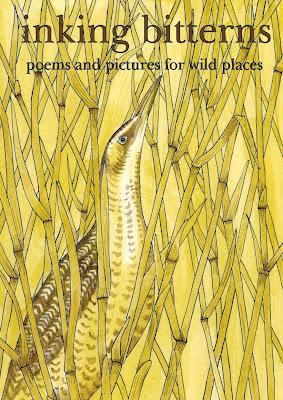 It's a collection of poems from Colin Brown, Liz Brownlee, Stewart Carswell, Alana Farrell, Deborah Harvey, Alan Summers, John Terry and Cathy Wilson;  and it's illustrated throughout by me.

It costs £5, and you can easily buy it online from the Gert Macky website. Or, if you have the good fortune to live in Bristol (and if not, then why not?) - you can get it in the Durdham Down Bookshop, or Stanfords in Corn Street.

After our quick jaunt round Wiltshire yesterday, it can also be found at Devizes Books and the Corsham Bookshop,  both fine shops worth a visit even without the prospect of this particular book.

We'll be reading from the book at Halo, Gloucester Rd, on Monday 2nd December, and at Foyles on Friday 6th December.

And I'll be at the Local History Book Fair at the Bristol Record Office on Saturday 7th December, which is very handy for the Create Centre, who have their Festive Fair at the same time. 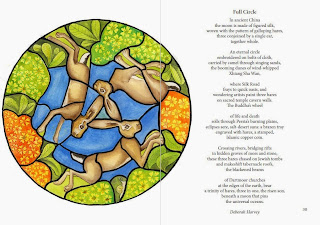 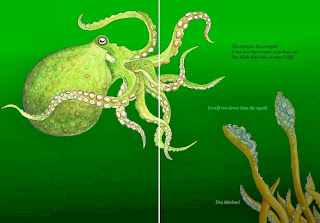 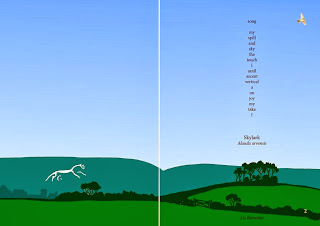 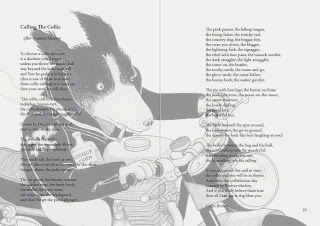 you know when you've been mansplained

This picture was retweeted into my feed yesterday. So I contributed my tweaked version of it. 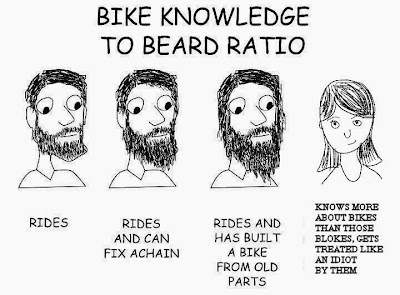 ...and instantly got told off my a couple of men, who pointed out that they were not like that. One of them said "bit harsh. I've built a bike from old parts & I just swoon if I see a girl with a bike" ....which strikes me as being a less than entirely helpful response... Another chap said that he had a history of challenging sexism in cycling and elsewhere, and that gross generalisations do not help.

To which Phoebe (*waves*) replied that there is a difference between a generalisation and a common experience. Which sums it up so neatly that I don't feel the need to add to it.

I'm writing this up because the last time something similar happened, I felt effectively stifled. On that occasion, I'd mentioned 'mansplaining', and an old friend complained that he felt offended by the term, and that the sort of people who do mansplain do it to him too. And I didn't want to argue with him and hurt his feelings so I shut up.

The thing is, that there are indeed men who get talked down to, and men who talk down to men. And that is bad.

But there is still a huge difference in experiences going on, based on gender. Which is why the term 'mansplaining' is so instantly recognisable to the women who've been on the receiving end of it.

I gained something of an insight into this process when I transitioned, of course. Not that I was oblivious to sexism beforehand, obviously; but the great mass of sexist assumptions that underlies our lives, like that great bulk of the iceberg that you can't see because it's underwater? -maybe we're not as alert to that as we might be, simply because it is all-pervasive and has informed our lives from the very beginning.

Certainly, before I changed gender roles from male to female, I had a good work record and reputation (I worked as a mechanic in the Merchant Navy, if you didn't know). And I thought that it would stand me in good stead post-transition; that I had earned the right to be respected in my professional life. Hmmm. Up to a point, Dru, up to a point.

The reality was rather more complicated than that. There were some good people in my workplace (a large ferry going between Portsmouth and Bilbao), and I was promoted out of the engine room to the repair team, which was both more interesting and a great relief, as it got me away from the more troglodyte elements of the crew, who looked on the engine room as a sort of floating Jurassic Park for sexist dinosaurs.

But at the same time there was a lot of doublethink going on; so I was doing a good job, but thought of as doing a bad one - at the employment tribunal that I ended up taking the company to, it was claimed that the quality of my work had gone right down (though they would say that, of course, wouldn't they!) -and I often felt invisible, as men talked right past me to get advice on things from other men rather less experienced than me.... nothing unusual in that, of course, but the contrast between that, and the way I used to be treated simply because I presented as male, was a visceral lesson in how different are men's and women's experiences.

So if you're one of the good guys, please be assured that you are valued, and all the more so because there are so many bad guys. And please don't feel got at when we talk of mansplaining. It's not about you.

(I was reading tweets from that fine organisation The Size Of Wales yesterday, and remembered this incident from the Arabian Sea. The sketches are from my journal.)

Email ThisBlogThis!Share to TwitterShare to FacebookShare to Pinterest
Labels: haiku, the size of Wales

Again this December, a wide variety of Bristol's publishers and book people will be at the Record Office at 'B' Bond, that big building down next to the Create Centre, for a Local History Book Fair. With talks by Bill Fairney, Mark Steeds and Lucienne Boyce.

It's on Saturday 7th December, and there'll also be the Festive Fair in full swing at the Create Centre, so there's plenty to do and see! -and I'll be there with the new anthology, Inking Bitterns, the perfect Christmas gift for that special person who has everything except a beautiful anthology of wild things.

the proof of the bittern

The proof copies of inking bitterns, the new poetry anthology that we're about to publish, are back from the printers. They look very good, too. Minuteman in Bedminster have done a terrific job of them; I wanted a book that would be nice to handle as well as read, and this manages it.

The Gert Macky website is now pretty well set up, though I'll be adding further stuff as time goes by. And we've already taken some orders for the book! Shall be sending them out just as soon as the first copies roll off the press. Meantime, here's a preview of what the book looks like inside.

What with painting and publishing and stuff, I needed a break. And where better than the Black Mountains, when it's pouring down and the lanes turn into rivers? Where indeed? So off I went to Crickhowell, and then, with Marta on board, onwards and upwards into the seriously hilly bits. The Trav faltered a little at the last steep hill up to Partrishow, but a second good run at it got us to the church at twilight.

The fine rain, the chill in the air, the mist, the wind and the tang of sheep conspired to remind me powerfully of Hafod Fach, where I once lived, and I was grateful that, these days, I've got a more comfortable means of transport at my disposal than a pair of old army boots.

It was flymageddon in the eglwys-y-bedd, where all the local flies appear to have congregated in hopes of living out the winter. Heaps of them lay dead below the window.

Marta was very impressed by the church, as who would not be? -and as the twilight deepened and we emerged onto the mountainside, a pair of ravens bounced up the wind across the valley.

Maybe they were the same ravens that we saw back in March, who inspired Deborah to poetry

In response to Latimer's suggestion that architect Charles Holden would be appalled at the thought of a primary school moving into his specifically designed book storage areas beneath Central Library (Post, October 8), we the undersigned would like to add our voices to the growing campaign to oppose the change of use.

Bristol Library service celebrates its 400th anniversary this year and during that time has amassed an important collection. The reference library is accessible to all the people of Bristol to benefit from that collection unlike the reference collections held within our universities.

It is our view that the entirely inappropriate change of use would make much of this collection inaccessible to the people of Bristol.

Former head librarian Anthony Beeson has previously pointed out in the Post that the basement houses the entire reference periodical collection with many thousands of often huge volumes and the majority of the art library reference collection, one of the largest such collections in Britain.

There is an entire room filled with valuable illustrated volumes, both private press and illustrated historic works. The same floor also has the local history library's illustrations collections and the entire lending library reserve of many thousands of volumes that are constantly drawn upon to supplement the open access stock.

In addition, of course, there are offices, meeting rooms and book-ordering and interlibrary loan departments on these floors and the library staff within them.

At a time that Birmingham has invested £80 million in a new library and Liverpool has spent £55 million on revamping its Central Library, it is our view that the change of use would lead to a decline in services that could eventually lead to the closure and relocation of the Central Library. Surely it would be wiser to look at making Bristol’s own collection more accessible along the same lines as Birmingham and Liverpool, rather than lose Holden’s masterpiece to short-term opportunism.

We urge Post readers to lobby their councillors against the plan and to sign the online petition at http://epetitions.bristol.gov.uk/epetition_core/community/petition/2348

Libraries are places of the imagination.

(this letter appeared in the Bristol Post, paper edition)
Posted by Dru Marland at 14:28 No comments:

Most of us rabbits who disappear don't come back, Mrs, said Little Woo Woo, her dark eyes trembling. Not ever...

So begins the desperate search for Mr Rabbit....

Fresh from the printers comes The Railway Rabbits, the latest book by Geraldine Taylor, with pictures by me. She describes it as 'a story for children, written for grown-ups as well. ... for children, it's about a brave little rabbit searching for her father, helped by Hairy Old Badger, a one-eyed owl and London taxi drivers.'

It's a limited edition of 100, and if you want one then it costs £5, and is available from Geraldine Taylor c/o 28 Berkeley Rd,, Westbury Park, Bristol BS6 7PJ,   email geraldine@geraldinetaylor.co.uk

With the poetry anthology just about ready for sending to the printers, I took some time out to pop down to the harbour for the monthly Bristol Books and Publishers meeting on the Grain Barge. And, as I'd taken down an old book about the Bristol Aircraft Company for Bill Fairney, the talk got onto aeroplanes. The Bristol book chaps are very knowledgeable about all sorts of things, and aeroplanes are one of them. At least three of them were present at Farnborough when the DH110 broke up while doing a high speed fly past...

Meanwhile, just along the quay, the Plymouth tug Christine and tug Bristolian were arranging the cables on the paddle steamer (and Dunkirk veteran) Medway Queen and getting under way down river, on her return journey ultimately to the Thames esturay whence she originally hailed. Medway Queen has been extensively rebuilt in dry dock in Bristol, and the next stage is completion of her engines, which I believe is happening in Plymouth.

Later, walking on the Downs with Mal, we heard a loud explosion from the direction of Wills Hall. It turned out to be the sound of a giant pumpkin, dropped from a great height. We arrived in time to see another pumpkin explode.