Today's picture. This is the third version of the three hares that I've painted. I got the idea when Suzanne asked about something for the porthole on her narrowboat. Now to see about getting the design made up into stickers!
Posted by Dru Marland at 19:42 3 comments:

I've been enjoying James Russell's new book, Ravilious: Submarine, because I like Eric Ravilious' pictures and I've never seen the complete series of submarine pictures he produced during his time (subsequently and sadly cut short) as a war artist.

Apart from the submarine pics, there's loads of other stuff giving context and influences, and it was nice finding a picture from David Inshaw there too, another fave artist!

I took the pictures here down in Bristol city docks, because they've got a Ravilious connection too; before the war, he nearly got run over by a train here...

"...when Eric had decided to go on drawing outside after dark, and was working intently on his picture of a paddle steamer, he had suddenly heard a grinding noise and a voice calling out, 'lucky for you I saw you, old cock, or you'd have been a box of cold meat.' Eric had set up his easel, without noticing it was on the tracks of one of those light railways that are used in the docks." (Helen Binyon)


Perhaps this is the picture that he was working on at that time. Here is P&A Campbell's paddle steamer, Britannia, on Mardyke Wharf. And below it is a more recent visitor, the former Sealink Isle of Wight ferry Southsea, which failed to get preserved and ended up scrapped. I once took a trip on this boat, across the Solent. I was working for Sealink IOW at the time, on their car ferries. I sat in the crew mess on the trip; they whiled away the time on the voyage by drinking Stella and doing hot knives on the stove.
Posted by Dru Marland at 07:26 9 comments:

That thing we had, that alteration found?
-it had its moments. Then it ran aground.
Posted by Dru Marland at 06:14 3 comments:

Funny how a little goof can make such a difference to your life. Last Saturday I caught my finger in a sash window. The end of the finger was broken and the nail was ripped practically right off. So off I went to  A&E, and a nice medic removed the nail, sewed things back up again, and stuck the nail back on to protect the needlework. Which was as painful as it no doubt sounds.

House teenager reluctantly accepted that she'd be having to do the washing up. Though it didn't go down well.

"Why don't we have a dishwasher?"
"I don't like them, they cost money, use up energy, take up space that we don't have, I prefer doing it by hand cos it does a better job"
"We should have a dishwasher, everyone else has one"
"You buy it and install it then"

And so the week went on.

Oh look! Deb's book arrived. And jolly good it is too.

Finger's starting to get adventurous now. We'll be flying off to the hospital again tomorrow to see how it's getting on.

up on the roof 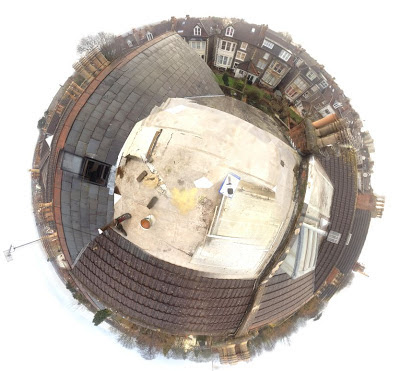 Halfway through my birthday cup of tea, I saw a Tweet from Andy Howard, a BBC Radio Bristol reporter. "Who's got the best view in the west?" he asked. "Me, akshly," I replied. 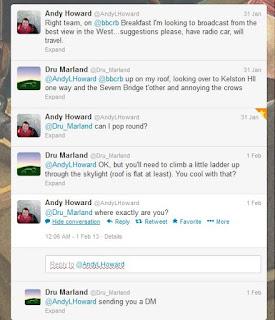 Next thing you know there's a van outside with a rapidly-expanding aerial reaching up to roof level.

"I've got to be on air in four minutes!" said Andy.

"Better dash then", I said.