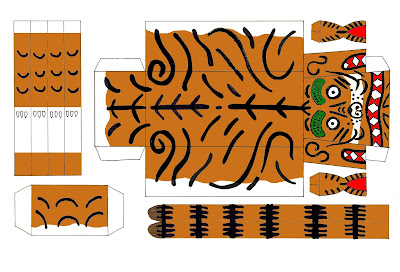 I saw a Japanese toy paper tiger on Twitter the other day; when it's assembled, it's placed next to a wall and wafted with a fan, so that it comes alive. The design apparently dates back to the Edo period. As I wanted one of my own, I drew this version of it as closely as possible to the original. If you want one, click on the picture to get it full size, then download.

The version I saw on the internet used seashells to weight the feet; I would suggest you use buttons. 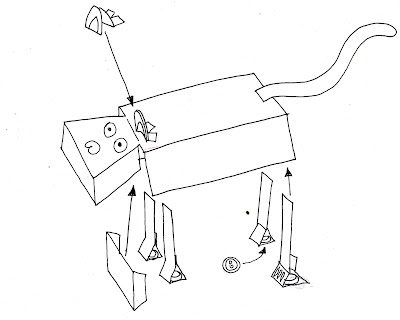 Here it is in action 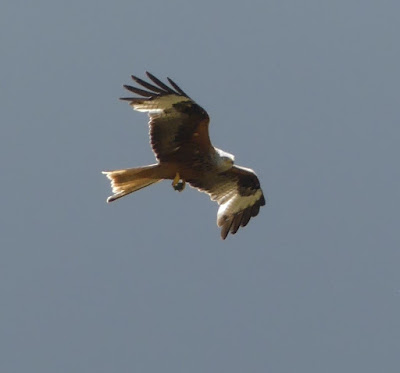 The well-heeled red kites of both Berkshire and Bucks
have moved up in the world, and wherever you look
they are wheeling and whistling with insouciance,
their eyes on the suburbs, their minds on the chance
of chorizo or pâté de lapin sauvage;
although if the locals aren’t giving it large
and their bird tables simply have nothing to tarry on
they’ll wheel away, whistling, and keep calm and carrion.

Here's one of the red kites that inspired that poem, just along the canal from Little Bedwyn. It was striking that they would be wheeling around over the villages; you don't see buzzards doing that. Anyway, it was jolly handy, because I wrote this one in next to no time and stopped worrying about trying to write something about kingfishers, as you almost invariably must do when you're writing an alphabet of birds (oh! did I mention Drawn Chorus?) 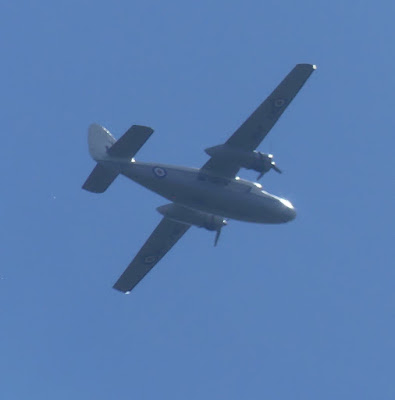 We saw a few more unusual aircraft on our trip east; here is a Hunting Percival Pembroke (Lauren commented on how great it was that there should have been a company called Hunting Percival) 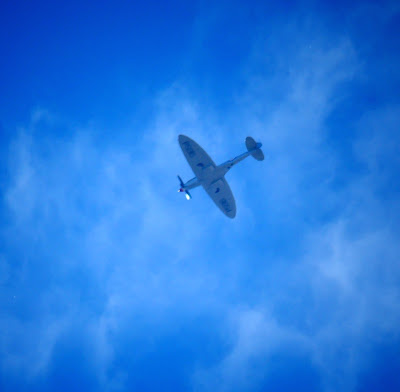 ...and here's a Spitfire, not entirely unusual but still nice to see. Look closely under the fuselage and you'll see two camera apertures; this identifies it as a photo reconnaissance aircraft, and therefore a Mk XIX.  I accidentally had the camera set to ARTYBOLLOX mode, which is why the picture looks a bit odd. Sorry. 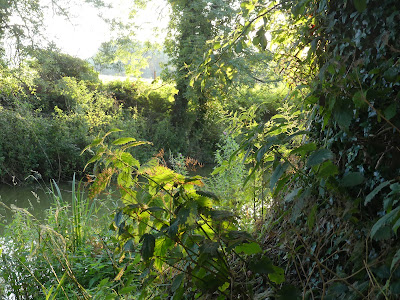 A more peaceable dawn scene here, because I like it; and here 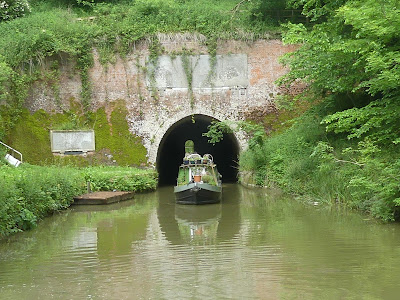 ...are Chris and Jinny, emerging from the Bruce Tunnel. It was a bit of an alarming experience for all of us; as I approached it, I thought "Ha! It's hardly any length at all!" and didn't bother switching any lights on. A very short while later I was completely disorientated, and had to dash through the boat switching all the lights on so that the light would shine through the windows and illuminate the tunnel wall, allowing me to gauge my distance from it like the Dambusters did with spotlights to show them their height above the water.

Having learned our lesson, I got a couple of very bright LED floodlights, and on our return we laughed at the darkness. As you see. 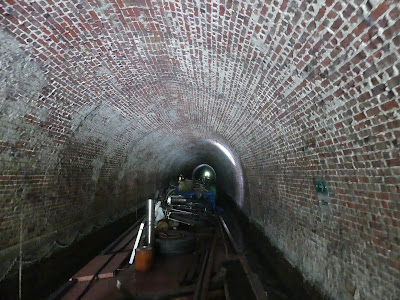 Having been starved of internet signal for ages, I'm catching up with a bit of blogging, as you may have deduced from the capricious nature of this post. 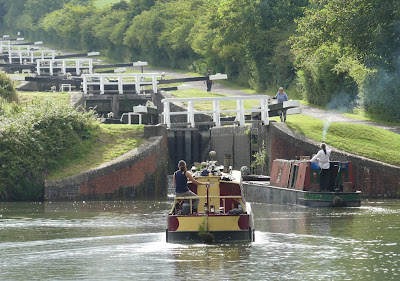 After our early summer slow voyage to Hungerford, we've returned to the West End of the K&A ready for next weekend's Floating Market at Bradford on Avon. While in Devizes, we helped friends up Caen Hill; here are Tiff and Matt at the start of the main flight, with Chris at the lock. And we in turn were helped down by friends. It makes it so much easier and more fun.

Walking back up to Devizes with Sue, who'd come visiting, we popped over the the Jubilee Wood, adjacent to the flight, and saw that the information boards with my pictures on had been installed. Funny seeing your own work there like that. 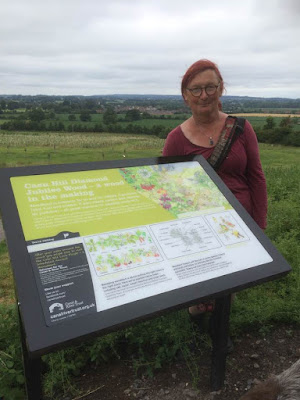 ...after a few days at Sells Green, we've moved down through the much smaller flight of locks at Seend, and are now moored in a lovely spot between Seend and Semington. Chris and Jinny went out walking last night, and saw the local barn owl at very close quarters. I'd had an early night! ...the owl was still very active this morning, along the banks of the Semington Brook. This is a different owl, the one that flew by us regularly at Great Bedwyn. 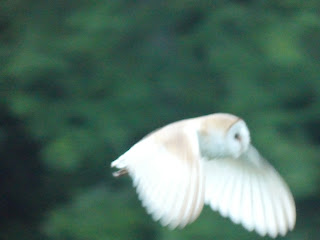 ...here's some spraint I spotted on our travels. But I'm not saying where. An otter was found dead on London Road in Devizes two days ago. Probably hit by a car, of course; but the Devizes Issue Facebook group posted the story up and several commentators, anglers all, were very hostile to otters. So it's best to keep schtum about sightings. I did post up a link to my response to this sort of thing, Otter Madness, that I wrote when an otter had been poisoned in Marlborough. It pissed off a couple of anglers, so a small result! 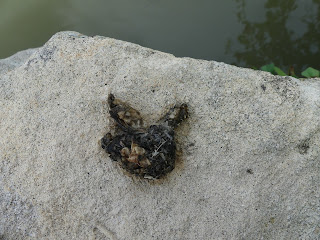 Drawn Chorus - an alphabet of birds 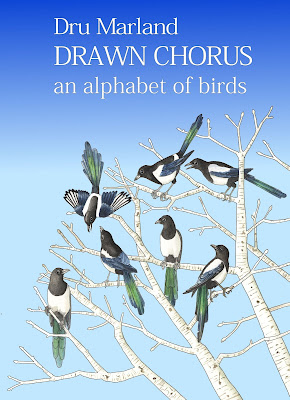 The new book is done! I was up in Bristol yesterday and today, helping out at Minuteman, the friendly printers, such was my keenness to get it done as soon as possible. Here's the scene this morning, as they went through the stapling and folding machine, the penultimate stage of the transformation of blank paper into a real life book (the final stage is trimming the edge opposite the crease, as you may have surmised). This machine is great fun, and reminds me a bit of the old Bamfords baler that we used for haymaking back at Hafod Fach, with its assortment of  kerchunks and ticks and low dronings, though without that majestic WHUMP that accompanies the compressing of a bale of hay. Hey, though, can't have everything. 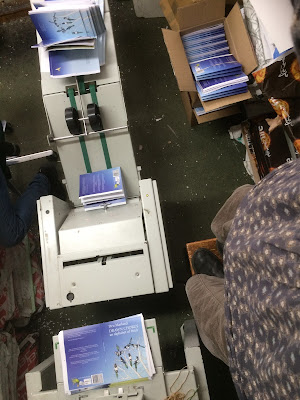 It is rather wonderful, that last bit where all the loose paper suddenly becomes a real book. 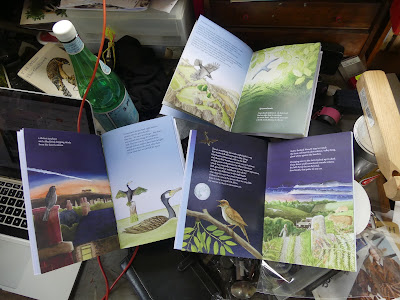 ...and now I'm back on the boat (in Devizes, at the mo) treading that fine line between thinking it's not bad really and not wanting to SHOUT ABOUT IT UNTIL EVERYONE'S SICK OF IT.

So. I done a book. You can get it here, on Gert Macky. But, gentle reader, I'll still like you if you don't.