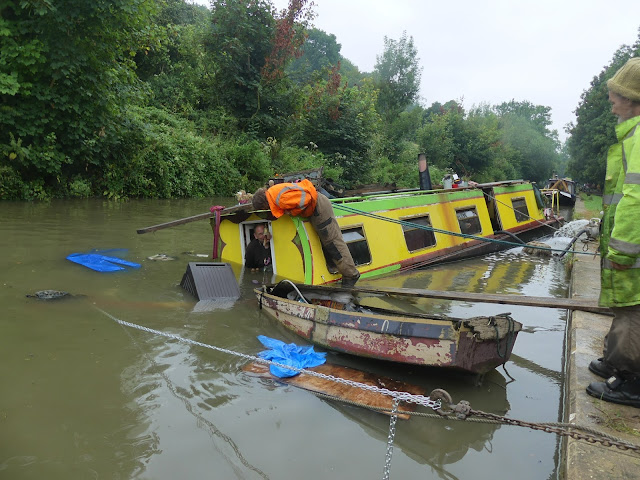 I'm moored at Horse Field, on the Kennet and Avon Canal between Bradford on Avon and Avoncliff. I arrived a few days ago after my post-lockdown cruise up to Pewsey. It's a nice spot.

Just after breakfast on Saturday morning, the alarm went out that Angel's boat had sunk. She's moored three boat lengths along from me so I went over to see what could be done. It seems that after the recent heavy rain, enough water had collected in the bilge to make the boat unstable, and she'd developed a list. When the engine bay ventilator grille reaches the waterline, a boat can sink in minutes if not seconds, when there isn't a bulkhead between the engine bay and the cabin. Fortunately, Angel had managed to get off.

The boat was moored tight at the stern,  which was close to the side; but the bow had slid down the shelving bottom, and the water was above the foredeck gunwale.

There's a community pump ready for emergencies like this. I fetched it in my bike trailer; Jassy drove to a hire shop and brought back another super big pump too.

We cleared the stuff off the foredeck, enough to be able to get the front door clear; a brave soul went inside to move stuff out from there too. Then we could seal off the door with plywood, and start pumping.

But the water was still coming in. We stood down until Sunday; then tried again with the entire foredeck sealed off with timber, tarpaulin and sandbags.

And at last, Angel's boat started to come up!

Her home has been soaked in muddy water, as have all her possessions. There is a crowdfunder going to help her, which is here

...and the Floaty Boat Fund, which is there to help boaters in trouble (the community pump and the hire pump were provided by them, along with other logistic support) can be found here 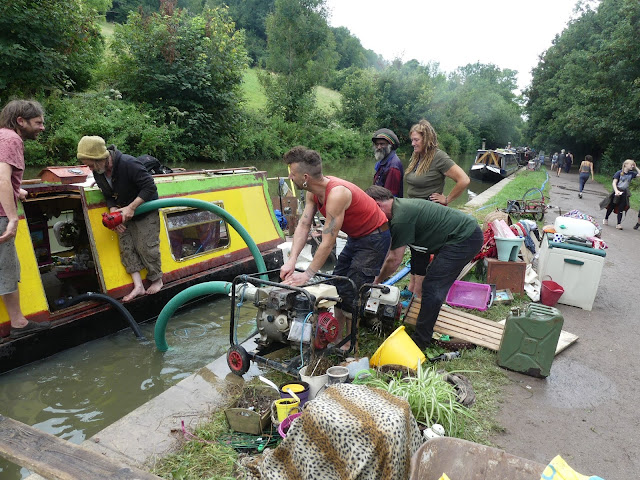 the pumps in action

the boat starts to float up, and Ted clears the sandbags from the foredeck
Posted by Dru Marland at 07:45 2 comments: