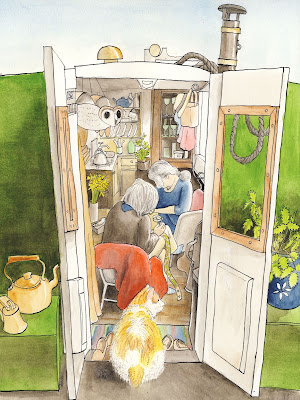 “He tried to get the moorings there removed” said Julian off Bimble.
Julian cuts the grass for Wiltshire Council, shifts the roadkill;
“mostly you can chuck it through the hedge, but cats and dogs
get taken in, whatever state they’re in, and logged;
someone might be missing them.”

He sails the pounds
from Hungerford to Horton, more or less, stays round

the Vale of Pewsey where he works.

We met at dawn.
A kingfisher bashed a minnow on the branch, then darted on,
a quick blue spark against Widewater’s reeds.
“Spent thousands on the legal fees, for all the good it did.
Still, he keeps the gate locked at the top of the track;
can’t keep folk out, there’s been a path since back
before King Alfred came and met his thanes,
there on the tump. They went and beat the Danes,
way up there on the Downs. See the lane?
The winter the canal froze hard,
they had to carry coal and water down from the end.”

A buzzard circled Pickle Hill; the stockman on his quad
moved the electric fence across the field a little way,
called out in Polish for the herd to graze.

We brushed the dew off meadowsweet
and butterbur, grown shoulder high,
through which the ways to moorings had been bashed
for boats at least half hidden from the track;
Eve, Netty, Bimble, Jessie, Arran; making home
here for a few more days, then moving on.

Below the big ash, where the ground is clear,
around last night’s fire circle lay empty cans of beer
and smoke-blacked cooking pots on half a scaffold plank.
A small child’s bicycle leaned on the bank.

Across the bridge we passed the big new house
in whose walled gravel courtyard sat a Jag.
Along the drive’s wide closely-tended verge,
rebellious moles had tumped the smooth mown grass,
and grey hairs on a strand of wire showed how
the badger made its customary way
into the pasture where, above the grazing Jacobs flock,
the tilting billboard claimed ‘we want our country back’.


I began this poem last summer, shortly after the Brexit vote. We were moored in a part of Wiltshire that is pretty much the epicentre of the places namechecked in Edward Thomas' poem Lob, one of my absolute favourite poems both of his and indeed anyone's. I've changed the name of the character in the poem to Ed as a nod in that direction, as I'm not sure whether the original chap approves of finding himself in someone else's poetry. (postscript: Julian is perfectly OK with being named, so I've changed his and his boat's names back to the proper ones!) 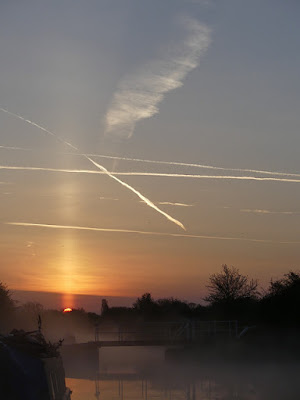 Here's a sun pillar, at dawn over the Kennet and Avon Canal at Sells Green in Wiltshire. It's caused by the sunlight being reflected by falling ice crystals. We were moored here for a week or so, and ticked off the waypoints of the spring as they passed us; the first willow warbler a few days ago; yesterday the first sedge warbler. And two swallows which flitted past, heading north. They are evidently making a summer somewhere else, because we've seen no more, yet. 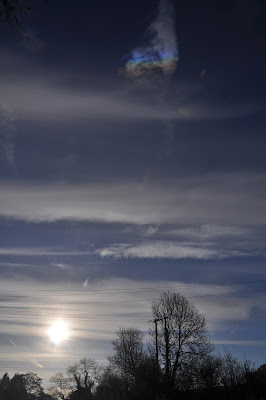 While we're thinking of odd and beautiful things in the sky, here's a circumzenithal arc, or possibly a parahelion, caused by the light refracting through a horizontal layer of ice crystals. This was at Avoncliff on May Day last year. 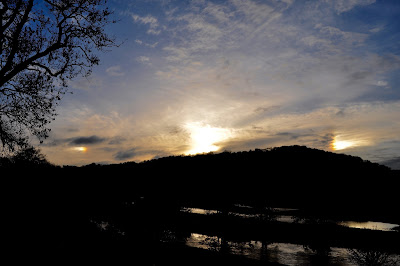 ...and here's a pair of sundogs, either side of the setting sun, near Lympley Stoke last winter. You can see the flooded Avon down there in the valley.
Posted by Dru Marland at 07:12 No comments: