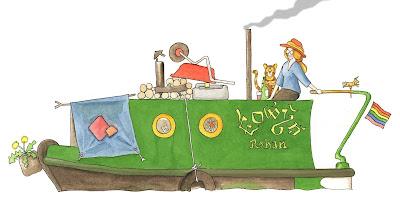 I drove to Pewsey to pick up some prints from the gallery; it's closing down, sadly. I commiserated with Sandra and Heloise; it had been a nice gallery, and they had been very generous with their showcasing of stuff.

Returning along the Vale of Pewsey, the tops of the downs were in cloud. Near Alton Barnes a great flock of birds circled above a ploughed field. They reminded me of the great peewit flocks we got in Lancashire in my youth, though these were not peewits. I didn't recognise them, so pulled over and took some photos on maximum zoom, as they didn't show any inclination either to land or to come closer. 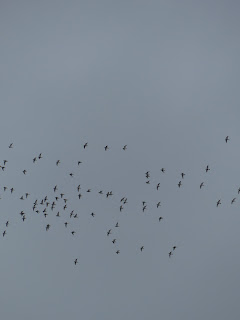 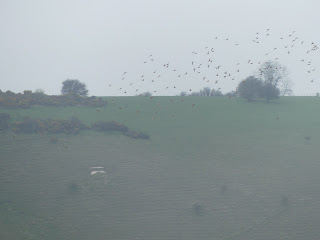 Stone curlews, Peter Munt says, and how could I argue?

As I looked through the books in the Devizes Oxfam shop, the two volunteers behind the counter discussed the signing of Article 50, which would be happening at about that time. "I gave my vote to my granddaughter" said one; "she's too young to vote, but it'll affect her for a lot longer than me." Granddaughter, 13 years old, is pro-european; so her grandma voted against her own preference. I congratulated her.

Passing the estimable Devizes Bookshop while looking for a 12V socket (as you do) I was hailed by Jo, who's just been reading a proof copy of Richard Beard's new book and is very impressed. I said I was too (just finished reading it myself, and when I get a moment, I'll be writing a review).

Back on the boat, I was just in tine to tune in to BBC Wiltshire to hear Richard not quite manage to plug his book. Still, he does good radio.

Back to the drawing board. This little picture at the top of the page is going to be a badge; I've just got a fresh batch of 'put the bunting out' ones done, and thought it'd be nice to have a new design. 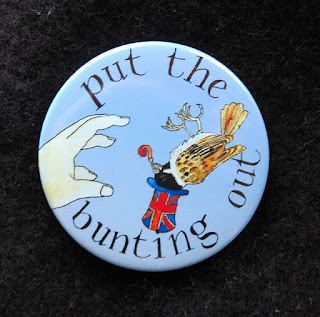 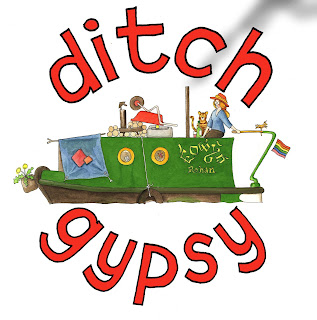 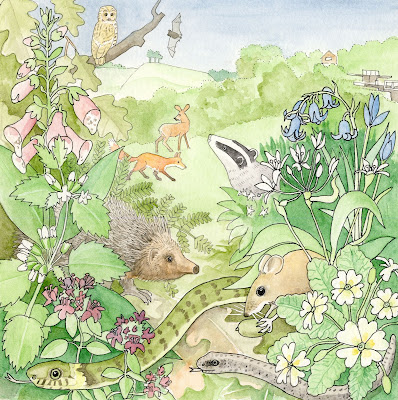 This is my weekend picture; some of the flowers and beasts around Caen Hill. In the top right corner, you can see some of the locks on the Caen Flight, the staircase of locks that takes the Kennet and Avon Canal up from the Avon valley to Devizes and the Vale of Pewsey. In the distance is Roundway Hill. Creatures included are grass snake, slow worm. wood mouse, hedgehog, badger, fox, roe deer, tawny owl, pipistrelle bat. The flowers are primrose, wild garlic, bluebell, thyme, lemon balm, and foxglove.

Now it's done, I'm having a beer and contemplating a fry-up.

It's three years now since I committed to buying my boat, and move onto the canal. Crikey! Now, excuse me, I've got BEER to drink.
Posted by Dru Marland at 14:40 No comments:

Some of the women on the Kennet and Avon canal, for International Women's Day. Because they do stuff for themselves. And they rock. (if you click on the pic it'll probably get larger. Sorry) 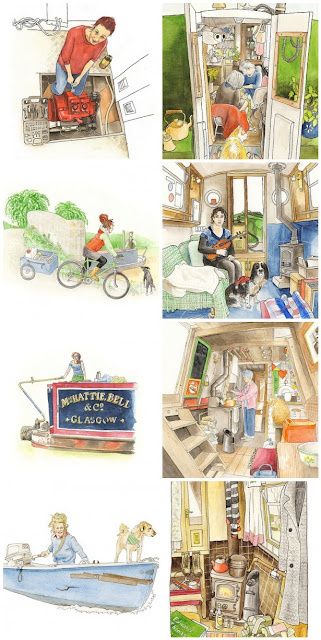 The longer hours of daylight are making a big difference to life on the canal. I look up from my desk after a quick bout of painting, and see that it's already dawn, and the tea isn't even finished brewing. 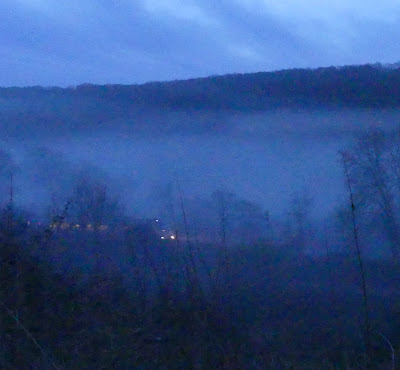 The blackbirds and thrushes are singing away in the rain, just as they were doing in yesterday's misty start. I was out looking for bullfinches and goldcrests. 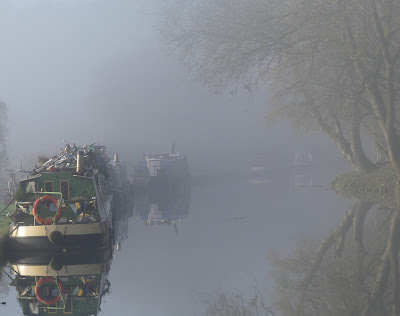 It sort of goes against my ideal of birdwatching, accepting gratefully any bird that comes along, but not actively seeking them out. But it is so nice to see these birds. Particularly goldcrests. Until recently I'd only knowingly seen one once before, when it stopped to perch on the railing next to me on the Pride of Bilbao off Ushant. 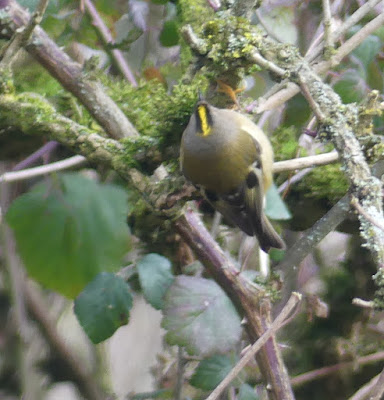 Then six weeks ago I watched a little bird flit across the canal up into an elder tree; I casually assumed it was a wren and wondered why it was behaving slightly differently to the usual wrens, who mostly stay low. So I watched and watched, and realised what it was.

And now I know to look for them, I do keep seeing them. One regularly visits the elder tree by my boat, hunting up and down it for insects; there were two together the other morning, piping and (I guess) canoodling. It's a useful reminder that even if I think I'm walking around with my eyes wide open, I'm still missing what's right there in front of me.

The day warmed up and the sun shone bright as you like, burning off the last of the mist in the valley. The crocuses growing by my mooring rope opened out wide. Cheerful walkers lugged their rucsacs along, and hireboaters chugged by in a leisurely way, on the beer already.

Then the wind got up enough to make a swell along the canal, all of an inch high, and the tarpaulin over the front of the boat flailed as though we were rounding the Horn, and a ferociously cold rain pelted us all.

But there was a rainbow afterwards. 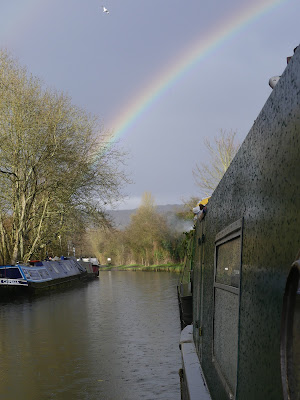 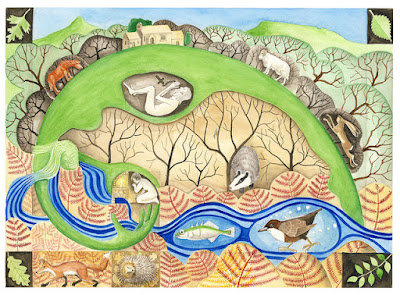 When David lived in Ewyas, in a hut at Llanthony,
He’d sometimes pop to Partrishow for tea with Issui.
They’d sandwiches with watercress, and water for a brew,
and they’d discuss the sainthood lark for half the afternoon.
But with such steep tracks to walk before the setting of the sun,
They’d say their fond farewells and Dave would set off down the cwm;
And Issui said ruefully, “I’m a martyr to these hills, me”
and David held his hand a while and said “you certainly will be”.

Saint David lived for a while at Llanthony (Llandewi Nant Honddu). Issui, or Ishow, had his cell by a well above the Grwyne valley, at what is now called Partrishow. He was murdered there by a traveller, and his shrine in the church that was built there became a place of pilgrimage.
Posted by Dru Marland at 09:15 No comments: