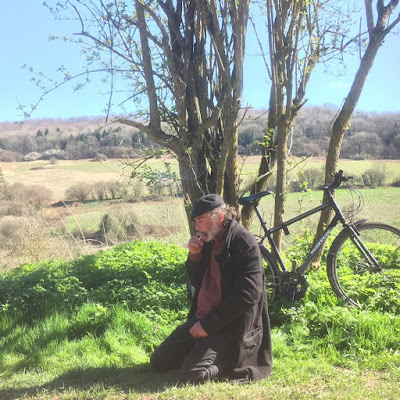 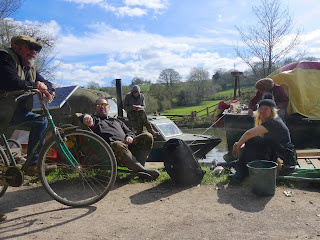 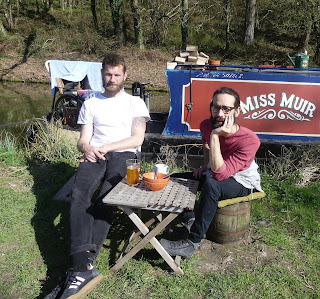 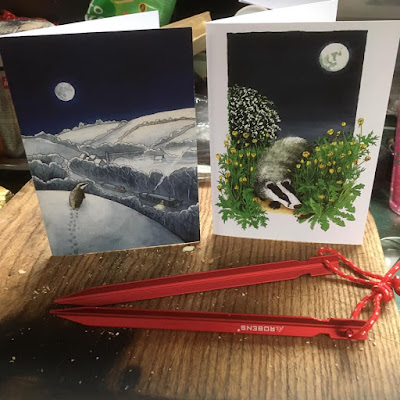 Finally got my badger pictures as greetings cards. I picked them up from Minuteman in Bristol yesterday, and they're in the Etsy shop. Also, check out the natty tent pegs. I needed some extra ones since I lent some to Richard when he was going off camping in Cornwall a couple of years ago, researching his last book. Lent, I say. Ha! I'm quite impressed by how smart these new ones are. It's all very well being self-reliant and making pegs as you go using your pocket knife and sticks, but I'm a sucker for shiny red things.

We're past the equinox, and the canal is a good place to be. As I write this, it's ten to six and light outside, and the blackbirds are singing away.
Posted by Dru Marland at 05:52 No comments:

the virtuous wolf of Wells 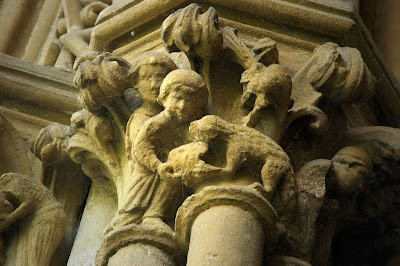 Here's another Somerset wolf to go with the Roman she-wolf on the top of the Mendips. This time, it's the virtuous wolf that led the searchers to King (presently Saint) Edmund, after he'd been shot full of arrows and decapitated by the Danes. The wolf guarded the head and called out in latin, "Over here! Come on, blimey!"

These figures are on capitals in the north porch at Wells Cathedral. My latin is v dodgy of course, but if yours is even worse and you want a translation, then here it is;

I'm the virtuous wolf
Come with Edmund's head
Who's a good boy, say?
Me! Me, by Hercules!

In our latin text book at school it appears that the Ancient R's had no stronger language than the occasional 'By Hercules!" but I suspect that the rougher elements of the proles or the Legions might possibly have had a few choicer words to use too.

Spring had been coming on nicely. Moored up at Widcombe top lock, looking out across the city of Bath, we watched the peregrine falcons toi-ng and fro-ing to the steeple of St John's church, where there's a nesting box. Sometimes one would appear with a dead pigeon, and then patiently dismember it on top of a corbel. Mind you, this was a long way off even through the binoculars (though you can cheat and look on the webcam), and peregrines generally seem to lead quite dull lives in the main, just perched there with an air of lofty disdain. Like war, their lives are long periods of boredom punctuated by short bursts of absolute terror, although the terror is usually some other creature's.

And in the warm sunny weather we boaters came out and socialised on the towpath, and I laid out my stall and sold lots of poetry books and pictures, and met lots of nice folk. And the trees alongside the boat were busy with fossicking goldcrests, which are always a small joy to see.

And one day all the boaters woke or came home to find bunches of daffodils waiting for them on their decks. Ding Dong had brought in a great load from the flower market, and he and Sherry Jim had a busy day delivering them from Bradford on Avon to Bath.

And then the storms came along, one after the other, and we all retired into our boats and huddled round the stove. I got on with my drawing, and did a quick trip to Bristol to pick up prints of the latest one, this picture of Dartmoor (which you will find in my Etsy shop, cough cough)

Honestly, I've not known weather like this before; gale after gale after gale. No sensible person was moving their boat. A few daft people, of course. But at the peak of the storms, when it was gusting up to Force 8 and more, wise folk who like their boats stay put. I did get a phone call from a CRT person while I was alongside in Bathampton on the 48 hour moorings; "You've overstayed on the visitor moorings" "Yes, and I'm very sorry, but it's blowing a hooley, and it's not safe to move.." The moorings at Bathampton are policed by some local residents; it's a stark contrast there between the net curtain brigade, in their neat houses where the plasticine factory used to be, and the ramshackle floating homes of Eli's Navy and other ditch gypsies. Two nations...

But I don't like folk who take the piss either way, and I took advantage of a lull to slip away eastwards.

Then there came another storm, and with it loads of hireboats, because if you're on a hireboat you don't want to just sit and stay put. Someone said there was a Groupon deal going on, which might explain it. Anyway, as I'm now moored close to the swingbridge in Bathampton, I watched them approach the landing, and as often as not goof, and end up broadside across the canal, fending off from the moored boats with bargepoles. Ouch. I did go and help, when it was possible. I don't just watch and snark, honest.

Trees have been coming down in the wind, too. A beech and oak came down together at Murhill, and a shout went out for help. But my chainsaw is acting up, so I couldn't do very much about it. Then Jim came along and so we took his boat down there. Stephen, a boater and tree surgeon, had already got there and cleared the way through for the convoy of hireboats that had been held up. They'd tipped him generously too, and in the case of the stag boats, they'd mustered and heaved the trunks across the canal and out of the way.

So we filled up the boat with timber and went to the pub.

on the Archangel's Trail

Deborah and I were down in Devon a couple of weeks ago, exploring places on Dartmoor from Brent Tor and the church of St Michel de Rupe (or 'St Michael of the Rock'), across to Chagford, another church dedicated to the Archangel. And then we met some folk from the local church and diocese, to talk about a new pilgrim trail that they're putting together. It's nice to be asked to join in with it, and as a getting-into-the-mood exercise (and of course a useful way of putting off some admin) I did this picture.

There's Brent Tor at the top, then St James' chapel in Okehampton (I thought it was a bit more picture-friendly than the parish church), the Lady Well at Sticklepath, St Andrew's church at South Tawton with its three hares roof boss; then Peter Randall-Page's Granite Song sculpture on an island in the Teign; and finally Chagford, and its figure of St Michael biffing the dragon.

And there's a few other things too, of course.

Here's Deb's account of the trip, with photos. Must get down there again soon. I'm already dubbining my boots...

I've run off a bunch of these pictures as a poster, because some folk have asked for one and heck, why not. They're here, in my Etsy shop
Posted by Dru Marland at 09:44 No comments: