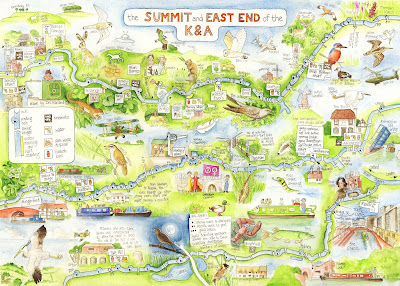 Here's my new map of the K&A Canal. It covers the length between Devizes and Reading. If you click on it, it gets larger so you can see it properly. It's intended to be useful for navigation, showing all the locks, bridges and facilities (sani points, rubbish disposal, water supplies and so on) and pubs; also interesting local features, history, and the wildlife that you are likely to encounter along the way.

You can get a copy from me on my boat (if you can find me!) or from my Etsy shop here.

It follows on at last from the West End map I did, so now that's all the K&A done!

Shall send it off to the printers tomorrow, and then get on with the next project. It's a good time of the year for productivity, with lots of daylight hours and rising temperatures; we're almost at the point where you don't need to light the fire in the morning, as long as you're wearing a thick pully and duffel coat. The hour is always coldest just before the dawn...

Phew. It took ages to do, and boat life kept getting inconveniently in the way, with water pipes bursting and pumps failing... still, I'm still afloat, and just need to fill the water tank soon so I can finally have a shower.

Meanwhile, the weather has been wonderful, and sunny days succeed one another, and all the hatches and windows are open, so that I'm constantly disturbed at my desk by questing wasps and disorientated bees.
Posted by Dru Marland at 13:59 No comments:

may blossom and cuckoos

Moving along the canal, we pass through very definite wildlife neighbourhoods, even though their boundaries may be invisible to us, and the reason for those boundaries not perceptible. So, as we moved up from Bishops Cannings to this spot to the east of Pewsey, we saw the lapwings flapping around at Allingham, just as we did last year when I drew them there.

And I heard the first yellowhammers as we approached All Cannings, where we moored up briefly to dump rubbish at the bins there. Another stop at Honey Street to fill up with water, then on past Woodborough Hill where the weather started getting all dramatic, and the following wind had me scudding along rather faster than I would have liked, past the moored boats at Lady's Bridge and into the relative shelter of Widewater, where Nigel the swan was presumably resting after gorging on passing canoeists, because he was fast asleep on the nest in the reeds. Now there's a bird that's unashamedly territorial; which is of course why we called him Nigel.


Here at Pains Bridge, east of Pewsey, I take my morning walks even more quietly than usual, in case I see the badgers again. It was on May morning last year I met one carrying a cub in her mouth, up the path that leads down to the young river Avon. I've not seen them again this year, but there's plenty of snufflings where they've scraped for worms, and latrines, and the occasional footprint preserved in the baked-hard mud.

The whitethroat is singing from the same trees as it did last year, occasionally flitting up into animated songflights. And the bullfinches cross between a hawthorn close by the boat, over to the ash tree on the other side, calling in a gentle piping that sounds like a slightly wheezy harmonium on its softest stops. They are very shy birds, but one flew up into the big oak where the kestrel sometimes perches, and hunted through the outer branches, its colours strikingly warm in the sunshine.

We hoped to hear the cuckoos here, and so we did. I've tried calling them with my swanee whistle, but either they were affronted by my performance or indifferent to it, although once the local cuckoo circled widely round the mooring, calling with a distinctively hoarse -oo following its cuck. One morning I saw two kestrels flying towards me along the canal, then as they drew level I realised that they were cuckoos.

The early morning bumping along the side of the boat that I've learned to associate with the hunting otter had me falling out of bed and scrambling onto the foredeck as stealthily as possible; I got there in time to see it surface in mid-canal; then it saw me and dived with a plop. Ripples and bubbles showed where it meandered over to the overhanging bushes, and then the water stilled. I think it may have a hover over there; we saw it again a few more times, and once in company with another otter.

When we arrived, just less than a fortnight ago, the hedges were white with blackthorn blossom. Then it began to fall, and a windy day blew it all away. Then the apple blossom on the wildings came, and is now falling too.

The hawthorn flowers appeared as neat round buds three days ago, and the pigeons took to nibbling them. And now the flowers are beginning to open up. It's striking the difference between here and Bradford on Avon, where I went on Friday to drop off some canal maps at the Cross Guns; the difference in elevation between here in the Vale of Pewsey and there is 280 feet. But there, the hawthorn is already in full flower, the blossom appearing to cascade down the trees.


The wild cherries along the wharf were sufficiently advanced for the pigeons to get interested, and there were several of them snacking away. You have to be sharp to get a bite of a wild cherry; the birds will strip the tree in next to no time, almost before the fruit is even ripe. And the blackbirds will make disapproving cluckings while you take your share. Passive aggressive little beasts.
Posted by Dru Marland at 06:32 No comments: 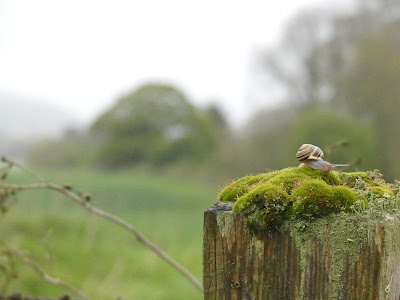 Up in the Vale of Pewsey, you can wake up on a still night and listen to the nearest thing to silence you're likely to get in Britain. Maybe a deer will bark, or a tawny owl will hoot, and then the silence will return and you can watch the stars slowly wheeling and slowly fall into them.

And sometimes a big military transport plane or attack helicopter will suddenly roar over, so low that the windows rattle, and that's pretty exciting too.

I like the Wiltshire towns we pass along the way; Devizes is very happening, with a lively arts scene and Jo Batchelor's ace bookshop; Pewsey has the large and lively Cossors charity shops, and you can often find interesting and unlikely books there; the other day I found a compilation of Abbie Hoffman's works, which included a detailed chapter on making bombs, complete with diagrams. Goodness. Funny to think that in these changing times, it would only take a photograph of those pages uploaded onto the internet to suddenly get the unwanted attention of officialdom, and all without leaving my desk.

So obviously I shan't do that. Crikey.

Yesterday we bimbled over to Marlborough for a bit of a jolly and to get the groceries in. Their Waitrose has more different sorts of olive oil than any other Waitrose I know. The charity shops are full of polo shirts with nautical motifs on them, and hacking jackets. I looked with interest at a spiraliser, and decided that my minimalist spiky potato peeler would do me just fine for when I want to shred my coleslaw, and had a lively discussion about the joys of living in a boat.

There's a bookshop too, and so I'd taken along a few copies of Drawn Chorus, because why not? I waited while the shop's manager helped a customer select a book by Santa Montefiore, then presented him with my slim volume.

He looked cursorily, and handed it gingerly back with an expression of distaste, as though every bird in the book had taken a shit on it.

Couldn't argue with that. Marlborough has a sound sense of what is proper; and if they are not going to buy poetry, then it is TS Eliot that they will insist on not buying.

Presently, we sat in a cafe, waiting for our lunch. I briefly considered an omelette, but then remembered where I was and went for the ham eggs and chips. Can't be too careful. Chris and Jinny whipped out their electronic devices and hooked into the cafe wifi, and began gleefully downloading Kindles. I made snarky comments on Facebook, and an old Flickr friend from Bristol commented 'I'm in Marlborough right now!'

And so he was. So nice to meet you face to face at last, Steve! 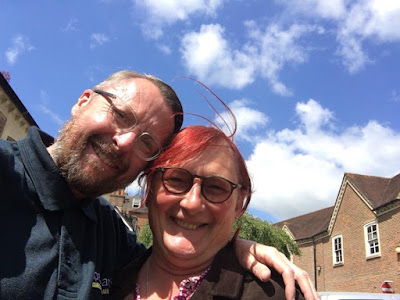 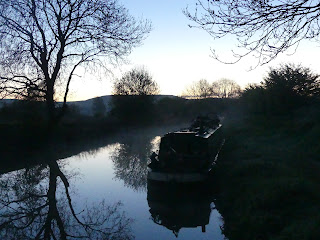 At Bishops Cannings we had the last of the frosts, waking to pure clear skies that went on for ever. The blackbirds sang from well before dawn, and sometimes you could hear a distant raven, and maybe see it now and then, climbing high into the sky until your eyes strained to see it, then tumbling down and cronking for the joy of it all. Presently the sun rose behind Tan Hill, and drew skeins of mist from the canal.

We walked up there, crossing the big fields of young wheat where the clouty damp earth hangs heavy on your boots, and partridges skulk into the nettles as you cross the stile; then up the Herepath, and out onto the tops that go on for miles towards Avebury and beyond. In the still of the afternoon, we heard only the skylarks. A pair of roe deer were crossing the ridge in the far distance. I lifted my binoculars, and they instantly turned their heads and met my gaze. Then they cantered over the brow of the hill and out of sight.

Presently we met the Wansdyke, still an imposing landmark up here, the ditch and rampart little changed since it was dug, though softened with time and hawthorn bushes. To the west it ran towards Furze Knoll, one of those clumps of trees on hilltops that are each so distinctive, I guess we can all name at least half a dozen of them. 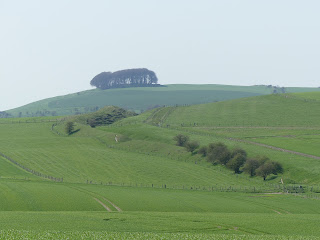 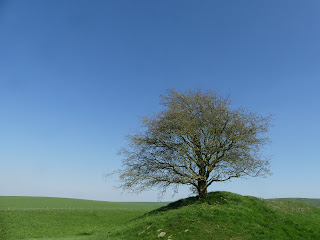 A bird was not so much singing as making a stuttering sneezy sound; it was unfamiliar, and we sat and watched and hoped it would finally show itself. It did, and revealed itself to be a corn bunting. 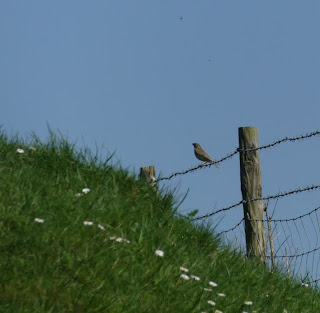 The limestone uplands are no place to be on a hot afternoon without anything to drink. We came down past barns where the swallows were still flitting about in the excitement of being back from their holidays, and gratefully put the kettle on. 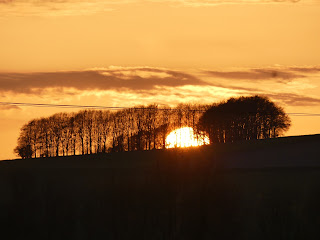 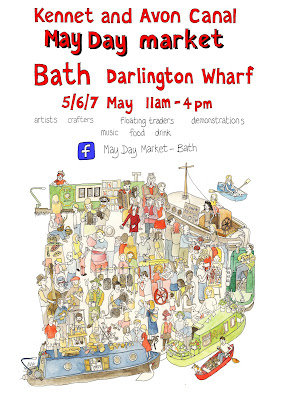 The first floating market of the year for the Kennet and Avon Canal kicks off this Saturday, on Darlington Wharf in Bath. It's the first time it's been held here, and the location is terrific. Apart from the traders on their boats there will be stalls and craft demonstrations by other folk from the floating community. And music too! 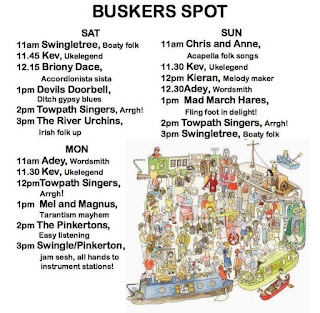 If you don't know the area, Darlington Wharf is on the eastern edge of the city, close to where the A36 ascends on its way to Salisbury. 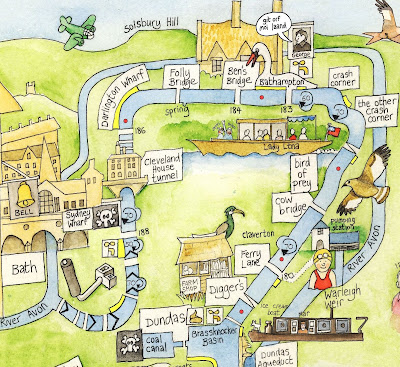 If you're arriving by train, either cross the river and turn left, carry on till you meet the canal then follow it up through the lock flight (which is a fine walk if you don't know it) or go to the Holbourne Museum, then up through Sydney Gardens and through the little gate onto the towpath, then left through the tunnel and so to the wharf. This is also a jolly good walk.

If you're driving and want to avoid the horribly expensive parking in Bath, then you'll probably find somewhere along the A37, or drop down to Bathampton and then walk from there along the canal, about a mile.