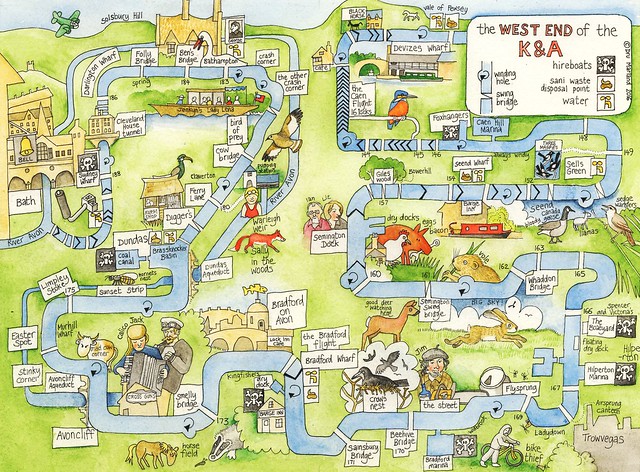 At last, I've finished this map. It's the West End of the Kennet and Avon Canal (that is, the section between Devizes and Bath), and includes as many as possible of the names by which the local places are known on the canal, as added by the K&A Facebook group members on this Google map.

Crikey! It took far longer to draw than anything I've done before. The first version got junked because it looked a bit rubbish; it's difficult trying to represent something that's essentially linear, on an oblong. The dimensions are dictated by the intended use of the map as a double page spread in the book I'm working on; but I'll also be doing some prints of the map, as it seemed so popular when I uploaded it last night.

After four days scarcely stirring from the drawing board, it was time to shake off the cabin fever. I took the panniers out to the bicycle - and was snapped at by the arctic gale that howled round me like a pack of hungry steppe wolves. It can get a bit harsh up here in the wide open spaces of the upper Avon valley, let me tell you.

So I went back in again, and stoked up the stove.

Fortunately, I have dried milk powder and flour, so I can still make a decent cup of tea and bread. Having skipped lunch yesterday I was achingly hungry, so made bread dough and, as soon as the wood in the stove had burned itself into a bright glow, I added the wire shelf and flattened out some balls of dough. Putting them onto the shelf inside the stove was rather difficult, as they were of course floppy. But after a very few minutes the underside was a fine colour and hard to the touch, and it was a doddle to take them out and flip them over; at which they obligingly inflated, and then came out, like puffballs but rather nicer smelling.