Deborah Harvey told me that Ronnie Goodyer, over at Indigo Dreams, is putting together a book about Border Collies in aid of Border Collie Rescue. She thought I might have some collie pictures lying around, and she was quite right. And while I was thinking about it, I wrote this poem, about the now long-dead Bessie, who features (reluctantly) in this picture. 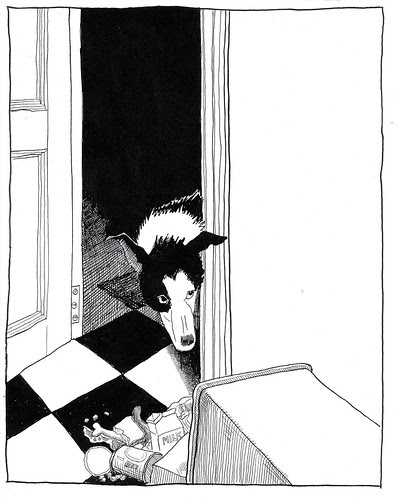 So much life behind those loopy eyes,
I thought, and bodged the hole you'd dug right through the door,
The night they let the fireworks off and I was out.

Always the mad, bad friend, the one that dragged me cringing
Through adventures that I'd never have had if it hadn't been for you.
There's me, mopping up the mess and picking up the pieces,
Accepting your so-rueful and bewildered "Had to do..."

And weren't you in a frenzy in the van, though?
I put a porthole in the side of it,
To stop you dribbling on my shoulder leaning out.
Nose in the wind through the whole damned celtic twilight zone,
From Mallaig down to Bantry, never missed a smell.

How the hell did we get mixed up in those armoured cars?
Driving into Derry, the soldiers hanging out of hatches,
Swinging their guns aside, going "Wuff. Wuff."

There are signs of spring all over the place, and I can hear blackbirds over the sound of the radio in the medium-sized hours of the morning- three o'clock, or so. Here's a little sample; robins and blackbirds, and the city starting to wake up.

cries in the dark at night

I was so deep asleep that I took a while to work out where I was when I woke up. And then a little longer to realise that the screamings outside were foxes, doing what foxes do at this time of the year. By the time I'd got the PDA recording, they'd almost finished, but here's a little sample of the sound. Saounds vaguely like a tawny owl, doesn't it?
Posted by Dru Marland at 06:56 9 comments: