We got as far west along the K&A canal as we wanted to go; closer to the city is very busy with boats now, and it's time to start heading towards the broad sunlit (though sometimes foggy) uplands of the Vale of Pewsey and beyond. There's an open day at Seend lock on March 10th, and we wanted to be close for that, as I may be doing some poetry stuff there.

So we chugged down to Dundas basin to empty the shit tanks and fill up with water. Eli's navy is moored up there on the garden spot; Eli and his friends are building rafts from oil drums with shelters on top like tents or benders; it's an anarchic response to homelessness, and interesting stuff, with some nice people involved in it. It's also cocking a snook at the CRT's rules and regs, and no-one seems to know quite what to do about it, as we all tumble in slow motion into our own national dystopia. Still, it annoys the folk who would prefer a Rosie and Jim on every boat, so it's got something going for it.

Chris and Jinny had to breast up on the boat that's been sat on the waterpoint for a week or two. As I passed to and fro across its foredeck, a dreadlocked head appeared from below, and told me that it was really early. I didn't think 11 o'clock too desperately early, and suggested that if he wanted peace and quiet there were plenty of places to moor a little way along the canal. He told me how unfair it was that CRT were on his case, and how nice it would be if they'd just let him stay wherever he likes. He seemed a nice enough chap, but his world view seemed myopic in the extreme, and centred pretty closely on himself...

Meanwhile, as our water tanks were filling, a couple of contractors were rodding through the sewage holding tank pipes, in an effort to alleviate the Nasty Pong that's been hanging round the basin for some time now. Then they hosed down the quay. It was a bit worrying, the proximity between the hosing and the fresh water with which we were filling our tanks. Still, we seem to have avoided any nasty bugs, so far at least. One of the workers told me that he came from Portugal, though he;s been in Bristol for six months now.

I calculated rapidly that my trip there, on the P&O cruise ship Iberia, was some years before he was even born. And felt rather old.

We sailed on, passing through a long film of oil, with nasty looking white scum in it; diesel and paint? Waste oil from bilges? -don't know. It's been a recurrent problem between Avoncliff and Dundas over the last few weeks, and CRT don't seem to know what to do about it other than conclude that nothing can be done. To be fair, removing the pollutants would be a major and horrendously expensive job, and it would be hard to identify their source. It's a worry though, with the waterfowl and otters getting it on then, never mind the fish that have been seen dead in large numbers. And of course, it's a worry that someone is evidently throwing this stuff into the canal heedless of the consequences.

The woods of the Avon valley are bright with catkins and plum blossom, and there's colour in some branches as they come to life again. It was a good day for cruising; the air still and the sun shining.

At Horse Field, we saw Peter on Grey Hare, and space to moor on either end of his boat. In perfect conditions, and with help from Peter and Jinny, I came alongside, took the painter, stepped ashore... and slipped on the edging stone and fell into the canal. It's impressive how heavy a duffle coat becomes when it's saturated. Fortunately, the underwater shelf is quite broad here, so I was saved from going right under my boat, and scrambling out was easy. I've fallen in three times before, and getting out again can prove surprisingly difficult even in ideal conditions.

Oh well, still alive. And my duffle coat is finally dry, after three days of airing in front of the stove. 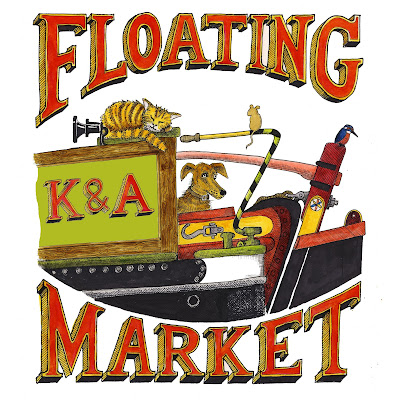 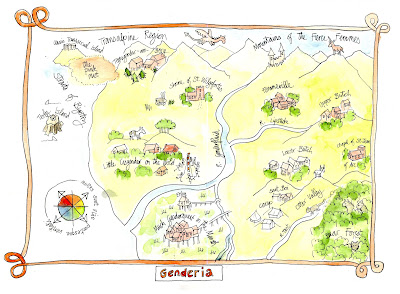 Yewtree posited gender as a scatterplot rather than a spectrum, and surveyed its topography briefly in this post. And, since I like drawing maps, I did one. My only contribution to the geography of Gendaria was Camp, and Classic Transsexual Island, lost in the Pink Mist up there in the top left corner. Not a very good name for the island, but there you go, couldn't think of a more succinct one. You know the sort though, the ones who think there's only one right way of being transsexual, based on old textbooks written by people who tell us what we are rather than those who listen to us... it's a Stockholm Syndrome thing, and unsurprisingly their island is located out in the Straits of Bigotry not far from Terfy Island.

It was a quick sketch... you can tell. Dashed yesterday afternoon when I should have been making pizza dough. Oh well, that can be today's treat.

The map is of course a work in progress, and if there are any other places you can suggest that should belong on it, do let me know in the comments.
Posted by Dru Marland at 06:51 No comments: 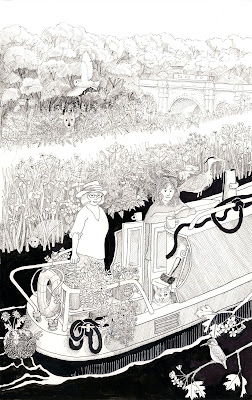 Here's Netty, with Chris, Jinny and Secretary Cat (the Skyravenwolf collective) on board, approaching the Dundas Aqueduct. I finished this picture this week. It was an interesting exercise; I used to do lots of pen and ink line drawings with hatching, but still have lots to learn. I was looking enviously at John Minton's illustrations in Elizabeth David's books; but then, just as in poetry, we all have our own styles, and must make the best of what we've got. 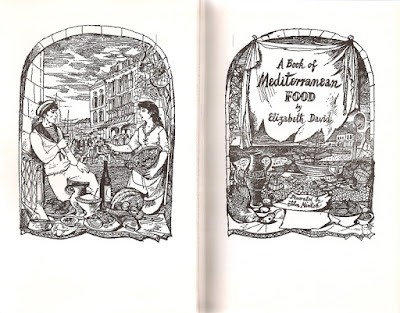 Mainstone Press have recently brought out a book of John Minton's work, by the way.

The days are lengthening by the day! It was still light at 5:30 yesterday. This is very welcome for us canal types, obviously. Still blooming cold though, and yesterday I was enticed out to service a bicycle for someone only to be rained, hailed, sleeted and snowed on in the space of half an hour. I really should have packed it in and gone back to it later, but there you go; sometimes when you get the bit between your teeth... I remember long ago back at Hafod Fach at haymaking, dad was baling when it started to rain, but kept on going, and I was wet and shivering and thinking PLEASE STOP WE'LL ONLY HAVE TO DO IT ALL OVER AGAIN ... but there you go, sometimes the bit gets between the teeth and the apple has only fallen a little way from the tree, evidently.

Talking of things that fall from trees, there's been much activity along this stretch of canal over the last week, as contractors tidy up the trees along the railway that runs alongside us. Boaters have been swarming down and rescuing the cut timber and chopping it up for firewood. The less enterprising get theirs from Sherry Jim. Here he is. I was alerted to his presence by loud shoutings the other evening; he and Ding Dong and the Technicolour Bedlinton were delivering to a neighbour. 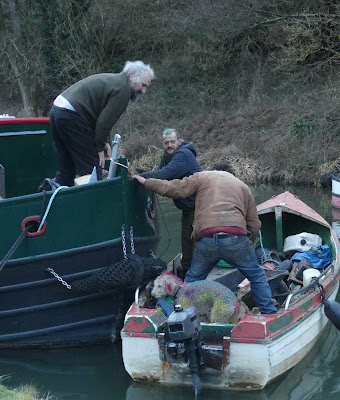 Ding Dong displayed his special facial skillz for the camera. He has, in his time, travelled to Cumbria to compete in the World Gurning Championships, but remains unrecognised on the world gurning stage, and continues to practice his art on the more humble one of the Kennet and Avon Canal. 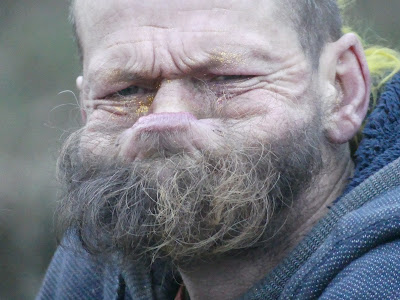 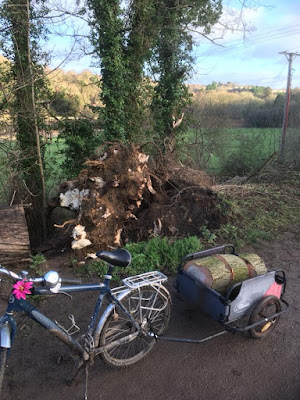 it is our medium of communication,
we wade through it, it clags our bikes
and is the topic of our conversation.

It was my 60th birthday, and I cycled into Bath to post a letter and to get some essentials and a few inessentials too. Around town, I saw several fellow boaters and we cheerfully greeted each other and I thought of this poem I did a couple of weeks ago.

It's all been a bit medieval along the canal, with the mud aforementioned, and with the various diseases. I had the flu, and it was truly horrid; three weeks of feeling tired and awful, and still not entirely recovered after four weeks. My neighbours had it even worse; they had norovirus at Christmas, then recovered in time to come down with the flu two days after I did.

Onwards and upwards. The daylight hours are lengthening; as I type this at 0710, a song thrush is singing outside, and a tawny owl is chipping in too. The woods echoed to the drumming of woodpeckers yesterday, and the cuckoo pint's arrowhead leaves are thrusting up along the towpath, where the snowdrops have been in flower for over a week already.