a short trip down to Portishead 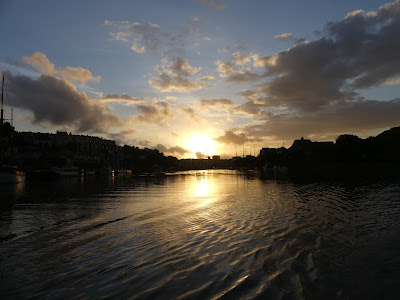 We were up at 5, drinking coffee, eating Asda's brioche swirls and looking at the sky. The air was almost still in Bristol Harbour, but the clouds above us were moving along at a brisk walking pace. It looked good to go; the lock out from the floating harbour down onto the Avon was set for 0630.

I'd driven up to town the afternoon before; parked out in Montpelier and cycled to the Arnolfini where Rick was moored. Juniper lay at the pontoon next to Boomshanka, another old familiar Kennet and Avon boat waiting to go tidal. The harbour was thronging; Bristol Samba were booming away over the water, and a DJ was laying down some shit on his decks outside the Arnolfini, for all the world like a drunk with a microphone at a scottish wedding. I looked into the Arnie, and recoiled from the video installations of the current exhibition. People, it was Hipster Central.

We walked over to Bedmo to stock up in Asda. South of the river is decidedly more old school Bristol. In the Magnet chip shop, I followed with interest the talk of the other waiting customer. "Wassee gone to Amsterdam for?"
"Pride, ennit? Amsterdam Gay Pride!"
"Dean's norra faag! I've known 'im fer years- Dean enno faaaag!"
(Sorry, clumsy attempt at rendering that Bristol accent there; it was so nice to hear though...)

The fish and chips were brilliant. We ate them sitting on the harbour wall, true hipsters we, and drank in the Nova Scotia, after we'd moved the boat down the harbour to escape Drunk DJ. Early to bed, we were lulled to sleep by the convoys of trip boats circling the harbour with crowds of drunk happy people singing fit to bust.

0600; Rick fired up the engine and we were away. A rainbow came out to accompany us across Cumberland Basin, and there were the dockies waiting at the already-open lock. 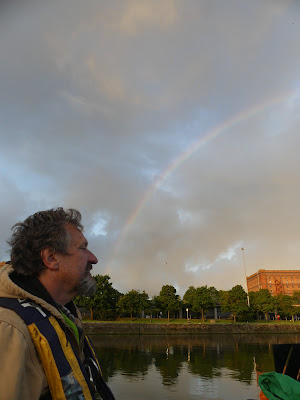 "These early tides are a killer", said the chap who took the bow rope off me. "Still, we'll get some sleep this afternoon before the next one". I recalled the difficulty of juggling a maritime working life with a domestic routine, and sympathised.

The water didn't have far to drop from the lock; the very last of the flood tide was eddying as we came out onto the river, and Rick opened up the throttle. Largesse, the other narrowboat that was making the same trip, seemed keen to go past, so we made way and off they went ahead; the owner having given his tiller to a pilot. 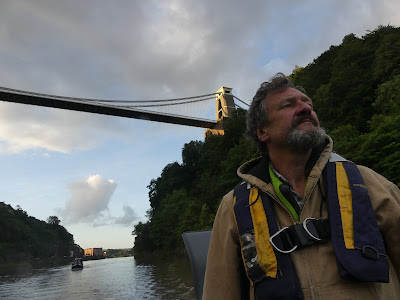 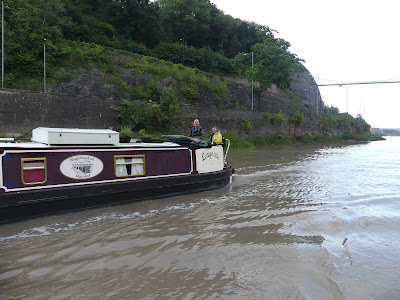 I pointed out the local stuff as we went down the river, and we admired the tree full of cormorants at Pill, the wide stain of their droppings bleaching the foliage below them. 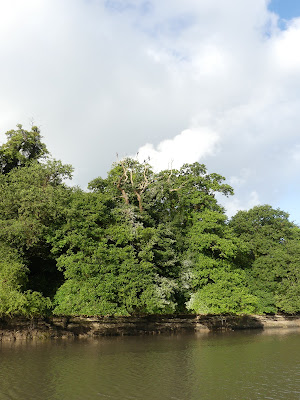 Beyond the Avonmouth Bridge the smooth blue water close inshore changed abruptly to a bumpy brown chop, streaked with whitetops. Largesse reached the end of Avonmouth Pier, swung round westward, and began pitching. 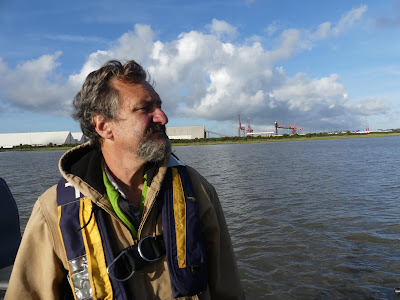 Through the haze I counted off the landmarks of the Welsh coast; Twynbarlwm, Mynydd Machen, then finally away to the west, Lavernock Point, and Exmoor and Countisbury Head far and hazy beyond that. Here and there were the buoys marking the shoals; but I couldn't work out which was the English and Welsh Grounds buoy, which replaced the lightship that is now sitting in Bathhurst Basin in Bristol, and about which I wrote this poem 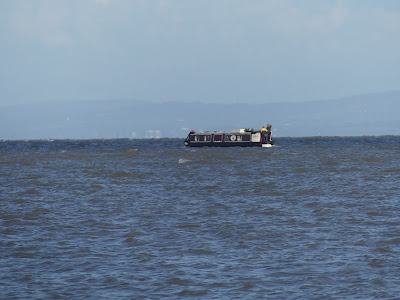 "Have you got video on that camera of yours?" Rick asked. I did.

With the breeze blowing F3 or thereabouts, and the increasing ebb of the tide, we were crabbing quite nicely as we pitched our way along the coast, the propellor occasionally racing as it lost water. Then the Portishead pierhead, that had been a distant vagueness for ages, was suddenly there above us and we were gratefully entering the lock. 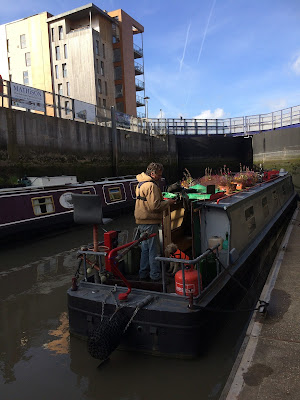 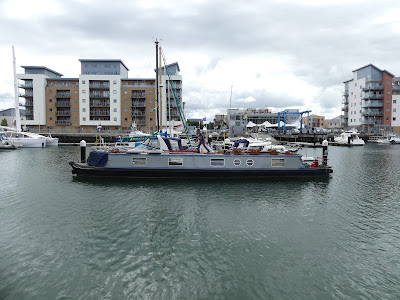