on the various usefulnesses of trees 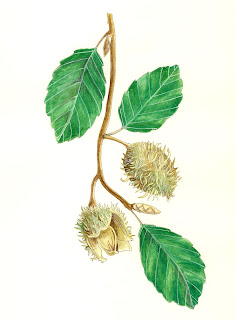 Come, carpenter, and make for me
A fine thing from an English tree;
A coffin from the wych elm, or
A rolling pin from sycamore,
Or blocks and stamps for butter patting;
Lime for blocks for felted hatting.

From conker trees, whose wood is white
A milk pail would be thought just right;
But from the ash (so profligate
its uses are) I’ve time to state
Just Morris Travellers, aeroplanes,
Policemen’s truncheons, hop field frames,
Hockey sticks and lifeboat oars,
And fork handles (not candles four).

The willow gives us cricket bats
And elevates the bearskin hat;
Alder for your piles and clogs;
Walnut branch for beating dogs.
Don’t dance around the maple tree
but steal its syrup stealthily.

this is a found poem, in the sense that I found it when I was tidying up the not-yet-finished ones on my computer. I'd completely forgotten it. So here it is. I got the uses of the trees from my SR Badmin Puffin book of trees, which id put a picture of too. If I could find it. 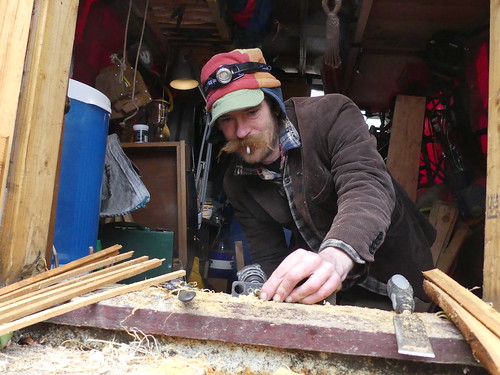 As a fully paid up member of the all powerful Trans Cabal, I rarely trouble myself with the outraged squeakings of the oppressed and marginalised hacks who bravely fly the flag for the anti-trans resistance in such dark and unfrequented corners of the digital world as the pages of the Daily Mail. Take, for instance, Belinda Brown, author of 'The Private Revolution' and a number of well-cited academic papers. More recently, she has started writing and blogging for The Daily Mail and The Conservative Woman. She has a particular interest in men's issues and the damage caused by feminism. Her appearance in the magazine Student Voices ("independent journalism, news and comment from students on politics and more") may provoke surprise, but the sad, tired tropes will not, in a piece entitled "We Need to Talk About the Transgender Movement."

Hey where are all the social justice, no platforming, snowflakes I imagine I am arguing against?! she asks. Getting on with their lives, probably, Belinda. When you encounter a shouty drunk in a bus station, you just keep walking, after all.

Let's unpick one small item from this piece, though; for many children, Brown claims, gender confusion is a condition which resolves. And for those who go so far as to opt for surgery the outcomes are surprisingly poor. She is vague about the numbers here, and rightly so, because there are few quantitative studies - few reputable ones anyway - and those that exist run counter to this assertion. It is true that some children explore their gender identities and either revert to or continue to identify as that assigned them. Which is all fine and dandy; as are the cases of those who identify as the gender opposite that assigned them, and continue to do so, and those who just want to play fast and loose with the whole gender thang. But let's look at 'those who go so far as to opt for surgery'. How do we quantify that 'surprisingly poor' outcome? It is as woolly as fellow Daily Mail writer Julie Bindel's assertion that 'a number of transsexuals are beginning to admit that opting for surgery ruined their lives'.

It is a regularly iterated claim, though, that there is a large and growing number of 'sex change survivors'. This claim has no basis in fact. Dr Stuart Lorimer recently took to Twitter to put some numbers out. In 15 years, he says, he has personally seen over 4000 gender dysphoric people; and he's personally seen 10-15 'regretters'. His colleagues report similar figures. As he points out, this is not a formal study, but these are far more reliable figures than any on offer elsewhere. (Further myths about transition regrets are debunked in this article by Brynn Tannehill). The clear inference being that medical intervention in cases of transsexuality is overwhelmingly successful.

It is unfortunate that these myths are trotted out in some feminist circles too, either by people with an anti-trans agenda, or by 'useful idiots' who take the words on trust because they come from Big Names. We all tend towards confirmation bias, I know, but laziness of thinking and a lack of intellectual curiosity can be damaging and discreditable. We should be on the same side, surely. 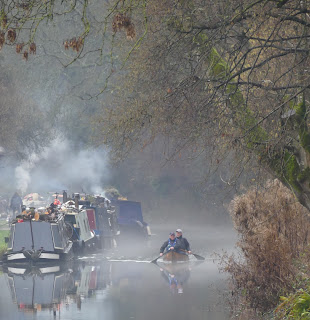 A fortnight on, and the ice is long gone from the canal. In the mornings, the valley is full of the sound of mistle thrushes singing. Over the last few days, the chaffinches have been warming up their songs, with a few faltering starts, and then finally the full repertoire, which is admittedly not a very large one in the case of chaffinches; still, it's their song, and good for them.

Boat Teenager came over for my birthday, and we popped over to Melksham to check out the charity shops. A junk shop had heaps of old galvanised iron farm gear out at the front. We went in for a look around. The shopkeeper told us that she gets her stuff from France, where they don't value old stuff like we do. I remembered a time in the Correze, when I was working for an architect feller on one of his houses there. We were there with his scouse building team, who were always good for a laugh, and always out of their depth in rural places; huddling together in one room to sleep, worried about cries in the night- "What the FUCCHHH was that!" "A fox, Jimmy, don't worry"

...on this farm in Correze they came scampering out of a cellar as fast as their little legs could carry them, having found a monster. I investigated; it was a salamander, and v striking its colours were too.
Anyway, we went to the farm next door where they were demolishing a 16th century cottage to make room for an extension to the cattle shed. We enthusiastically pulled antique stuff from the wreckage. The farmer thought we were potty, and he may well have been right.

Back then to Melksham. I bought an enamelled tin candle holder because I'm a sucker for that sort of thing.

Back on the canal, a call went out on the Facebook grapevine; a boat moored down on the river Avon in Bath had lost a couple of lines in the recent floods, and was in peril. So I cycled down to help out, stopping to photograph the Cormorant Tree near Bathampton. Where do they nest, I wonder? 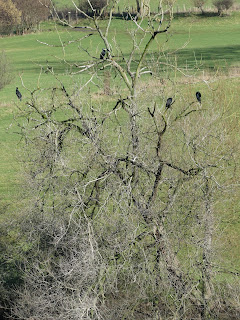 Adrian was there on the same mission; we lassooed the tiller and hauled it over so that the boat came alongside the wall, and he went down the ladder and added some ropes. 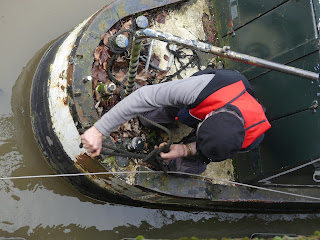 Then Wes, whose boat it is, turned up and went down to bale out the water.... while we watched, a kingfisher flew across and landed right below us. 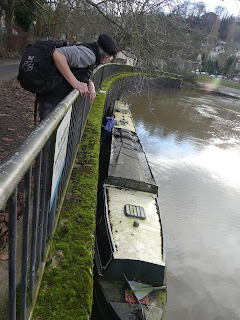 ...and flew away again in a bright blue flash, far too quickly for me to take a photo. But another one stopped for me as I cycled home. 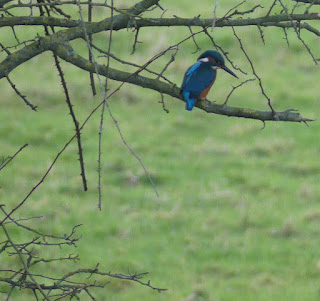 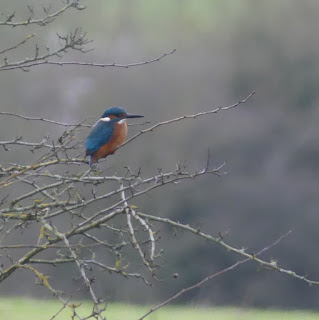