a song for Leveson 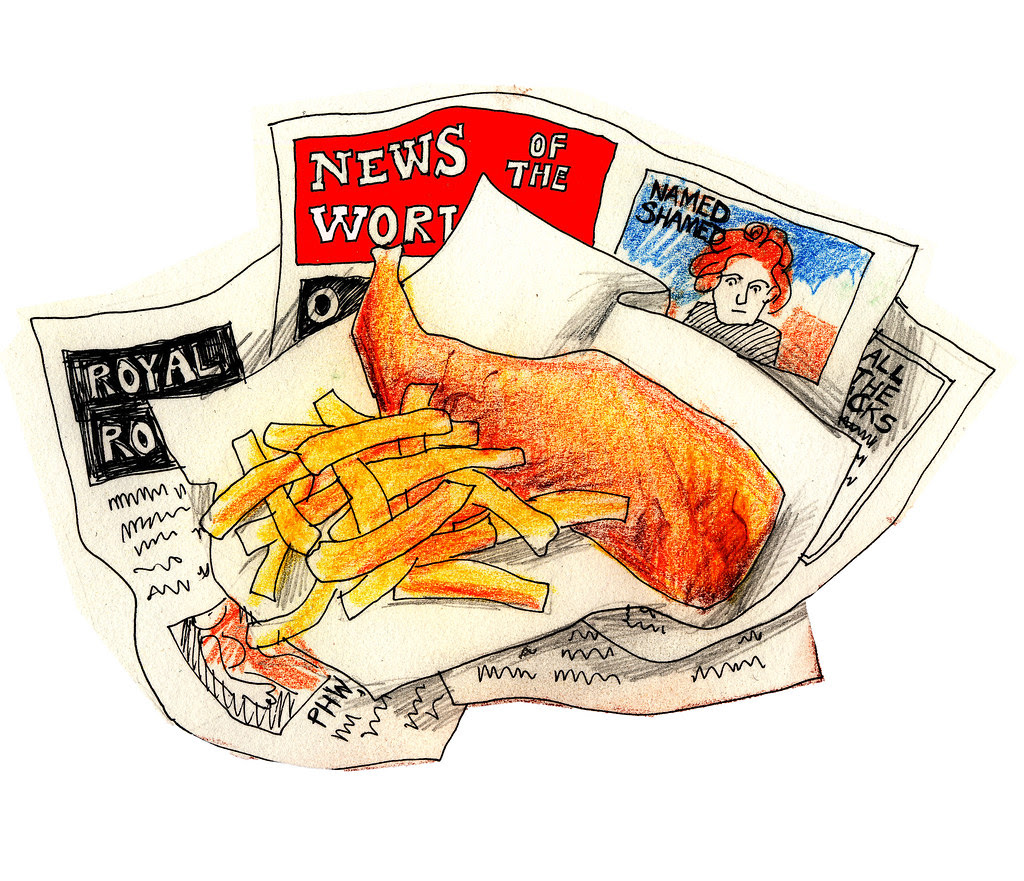 ...I do have a dog in this particular fight, of course...

back on the road again 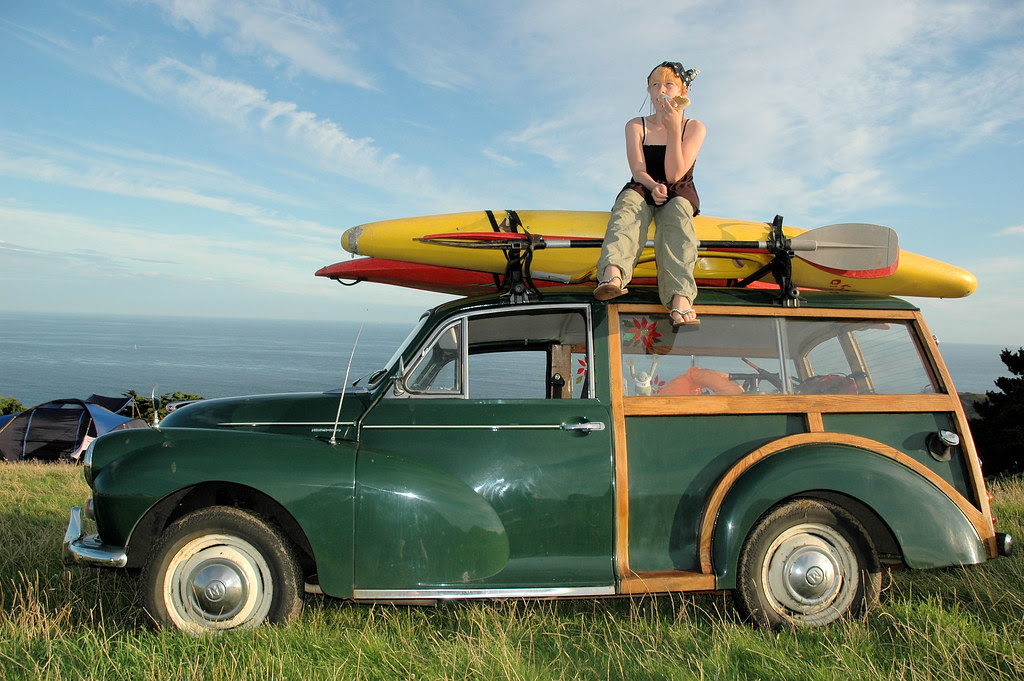 Driving an old Morris isn't all Housewives Choice on the radio and bowling along Devon lanes in search of cream teas and ginger beer, you know.

Grubbing around underneath the car on a winter's day is a whole lot less fun, but sometimes inescapable. The rattle that had been coming from the front wheel was getting worse. I'd thought it was a worn rubber bush in one of the trunnions (trunnions are the things that connect the upsy-downsy bit to the lefty-right bit on the front wheels. Sorry, but sometimes you have to use words like 'trunnion' and 'kingpin', because otherwise there aren't any convenient words available).

It wasn't that, though, it was the damper. The damper has an arm that connects to the top of the wheel assembly, and smoothes out the up-and-down motion as the wheel rides over bumps or leans into and out of corners. It's got a little hydraulic piston inside it, that damps the motion. Hence the name.

Anyway, the damper had come loose from the bulkhead, and the retaining bolts and the place they screwed into had been damaged beyond repair.

So there was much quiet intaking of breath at the thought of the narrowly-averted disaster of a wheel collapsing at speed. And 'O no! How am I going to fix this?'. There was quite a bit of that, too.

When I  finally got going, and had all the stuff I needed (after cycling miles and miles all around Bristol, to the Charles Ware Morris Centre on the southern fringe of the city (UNF bolts and recon damper), Bristol Tools (ace shop on the Gloucester Road) and Stone's Fastenings in Old Market (ace nuts and bolts shop in Old Market)) ....finally, as I say, getting the bit between the teeth, it was quick and straighforward. 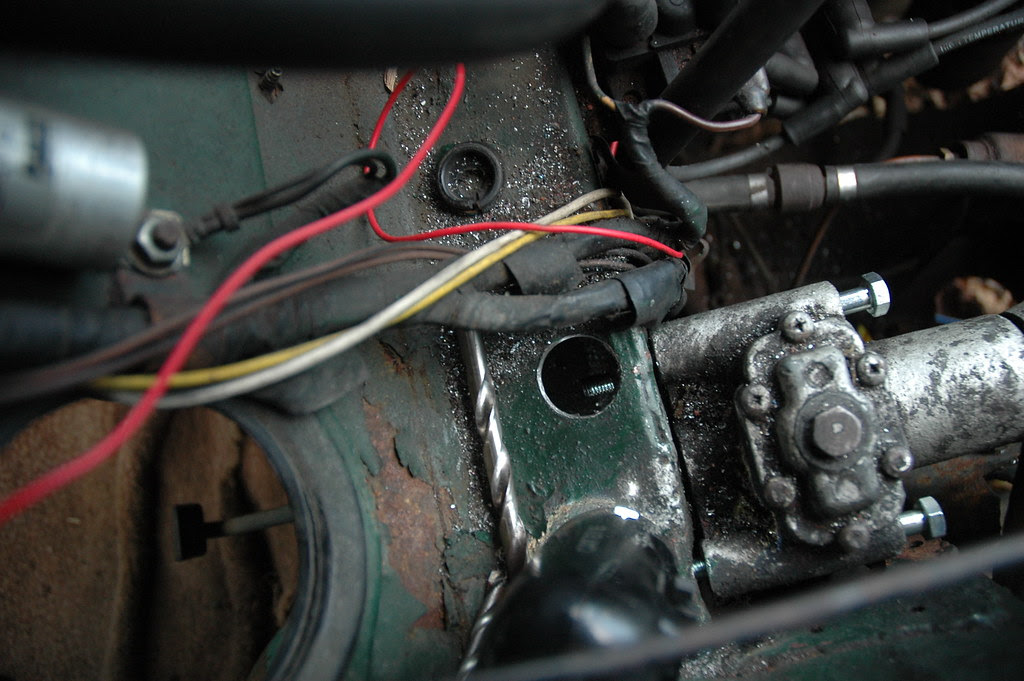 I drilled two big holes in the cross-member, to get access to where the retaining bolts go through. Then drilled out the worn threads of the bolt holes. Then inserted extra-long bolts, and secured them with nuts and spring washers. Job done.

You can only see one of the holes in this picture, because the torch is sitting on top of the other hole, illuminating the bolt end there. See?

Here, by the way, is what the damper arm looks like if you take away the wheel assembly. The trunnion sits on that pin there, with a couple of rubber bushes sleeved on. 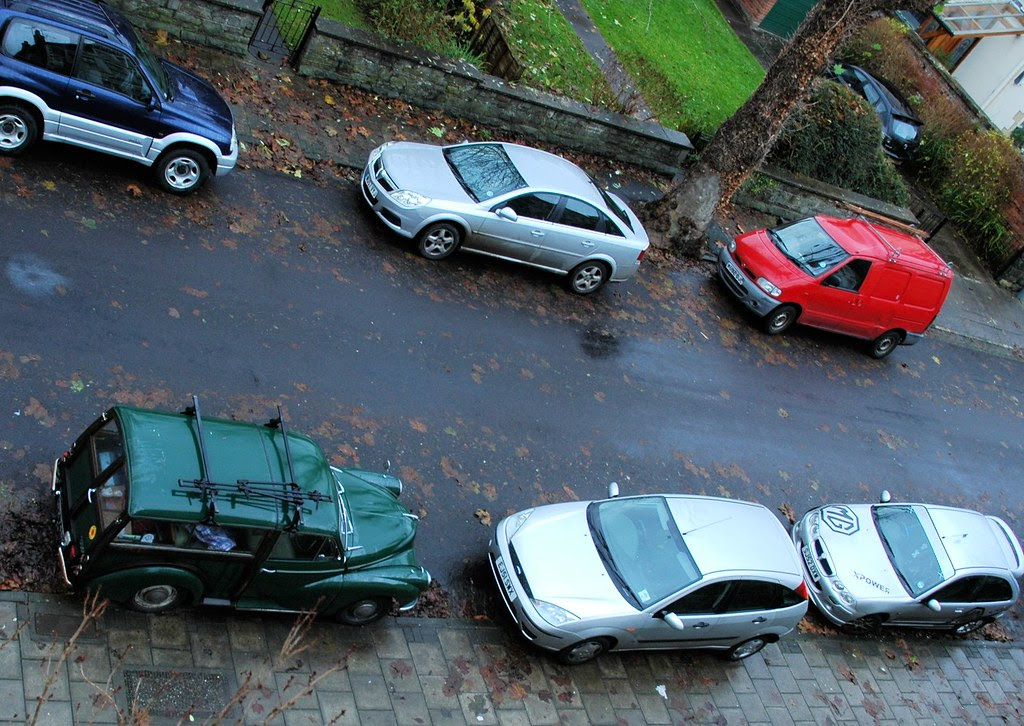 Oh dear, the rot's set in in the leafy suburbs of North Bristol.

The front of the Moggy has been getting very rattly lately, and yesterday I finally gave it a Serious Looking At. The starboard Armstrong damper has come loose, and the bolts holding it to the cross-member have stripped their threads. So I rolled the car up onto the pavement, so that the wheels are just on the kerb. This allows me to crawl under the engine and gain access to the inside of the cross-member. Today I shall go and get some replacement bolts and hopefully all will be well again.

This morning I looked out of the window and saw that someone, presumably inspired or emboldened by my example, has parked right up on the pavement.

This represents a further instance of the increasing encroachment onto pavements of cars, whose owners are presumably more concerned about the safety of their wing mirrors than that of pedestrians, who are, after all, inconsequential.

Hence the occasional sight of a parent pushing a pushchair down the middle of the road because there isn't enough room on the pavement to get past the cars; or of a blind person trying to negotiate a BMW 4x4 parked across the dropped kerb at a junction, which I saw recently.

No, honestly, little silver car person; this road's big enough for you to park on it! 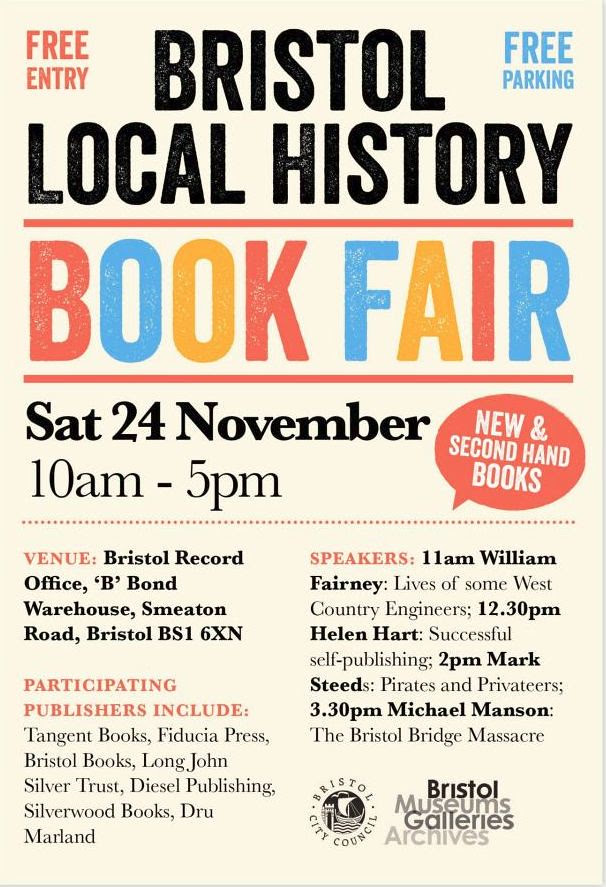 Today is the Local History Book Fair at Bristol Record Office, down by Cumberland Basin in B Bond Warehouse.

There are some interesting talks:


...and other stuff. I'll be down there too, with some of my books and pictures.

Saint Werburgh and the goose - cards 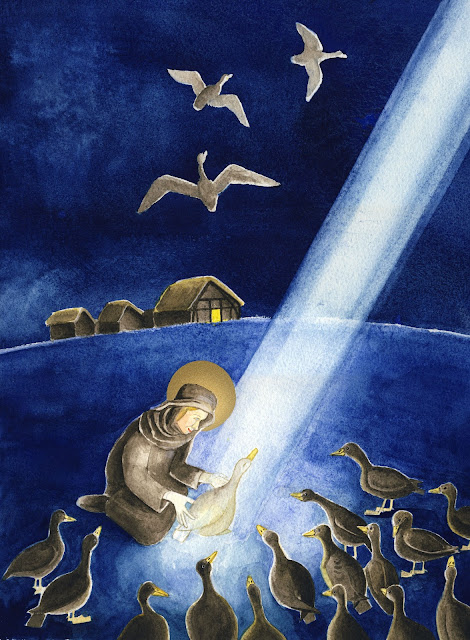 I thought that the story of Saint Werburgh and the geese would make a good subject for a seasonal card, not least because the central goose in the story is resurrected after having been eaten. A good story for a  gluttonous festival.

And now the cards are back from the printers (those nice folk at Minuteman Bristol), and available from my Etsy shop:

...though if you want more than that or fewer than that, just say the word and we'll sort something out! 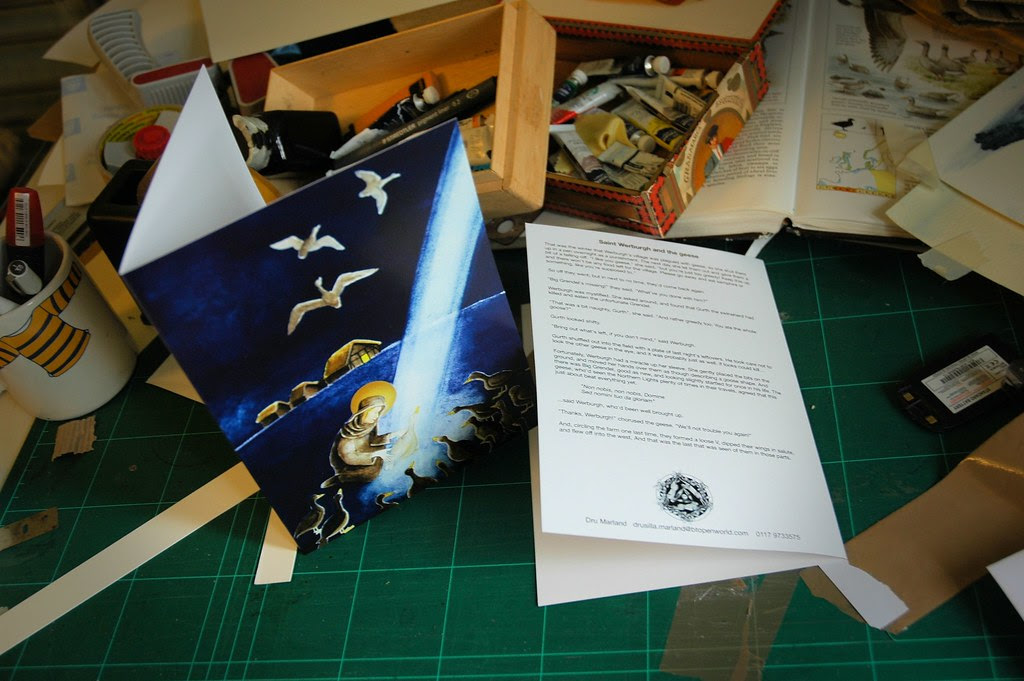 brewing up in the woods 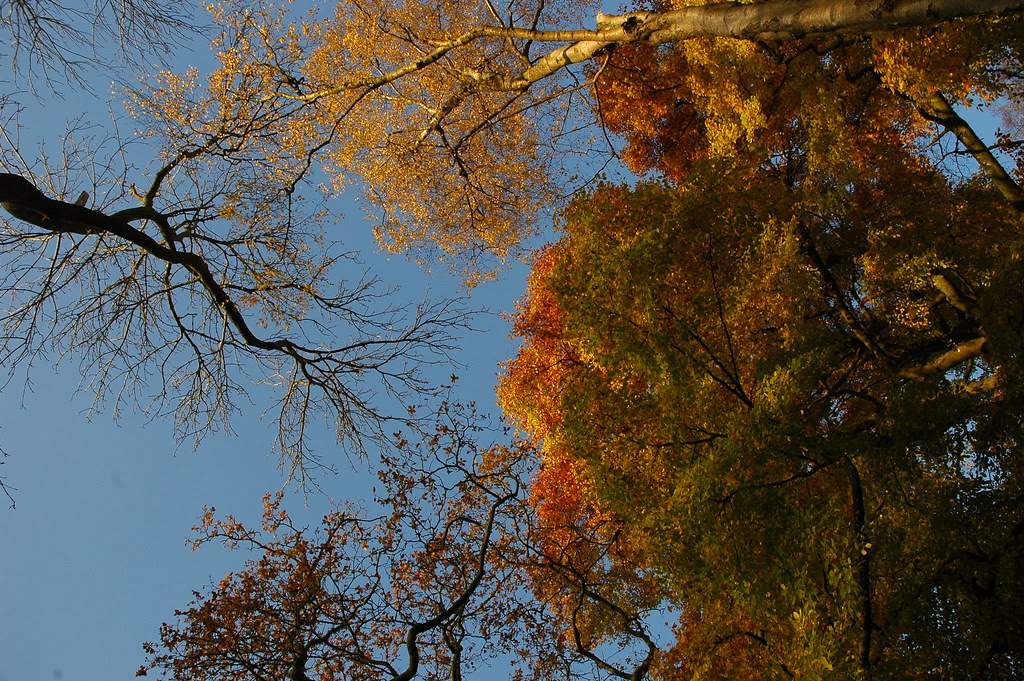 Sometimes it doesn't take much for an instant adventure.

If it's anything like Leigh Woods, pretty colourful. I'd rather go to Great Doward though. Wild, and... free!


Two hours later we were there. 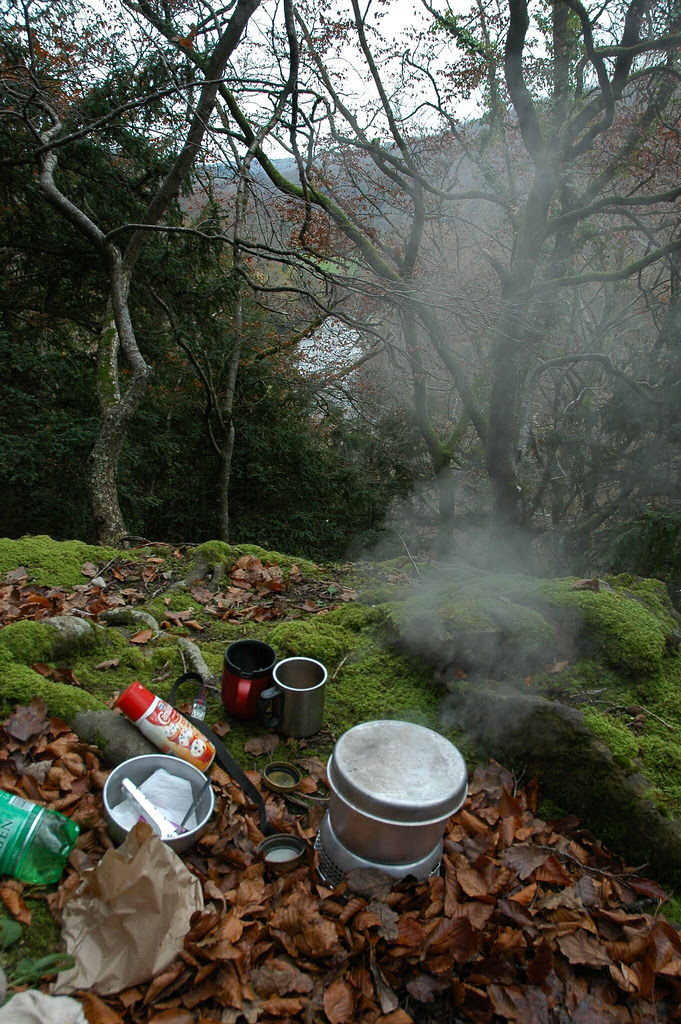 You can take a flask of tea on your travels, but it's just not the same as a Trangia steaming away, is it? 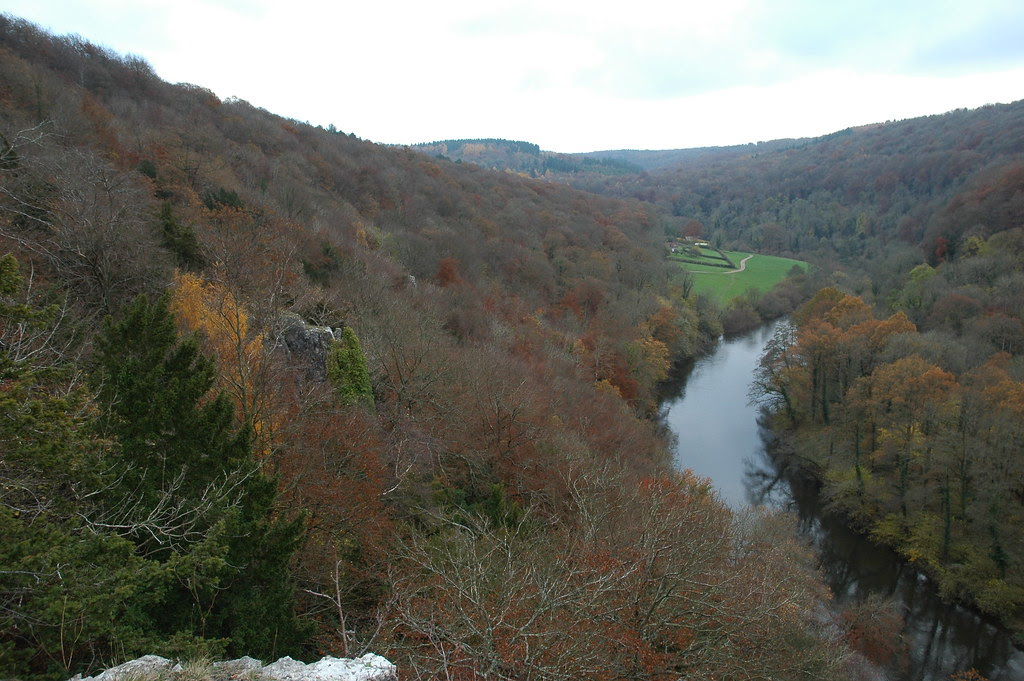 That's the Biblins down there, where I first came on a school camping and canoeing trip. The site's run by the Forestry Commission, for youth groups. Beautiful place. Especially first thing in the morning, when the sounds echo through the mist and the stags are barking in the forest.

No stags today; I guess they've finished rutting now. Just the nuthatches and the crows. And the stillness in between.

We got lost in the woods, wobbled across the swing bridge and back again, then scrambled up to the Seven Sisters, the limestone crags that overhang the gorge, and had our tea and pasties.

Heading back for Bristol, we stopped just north of St Arvans, as the low sun was lighting the trees spectacularly. Actually, it was on a drive down the Wye Valley that I composed a haiku for the first time in ages, a few years ago, and liked it so much that I started making a habit of composing haiku.

Damn- a speed camera?
-phew, no- the low autumn sun
flashing through the trees

This is the view across Lancaut, a peninsula within a loop of the Wye, with the cliffs of Wintour's Leap beyond. I learned from Deborah that the font from the ruined church there has found its way to Gloucester Cathedral, which is a step up in the world, but give me the wild any day. 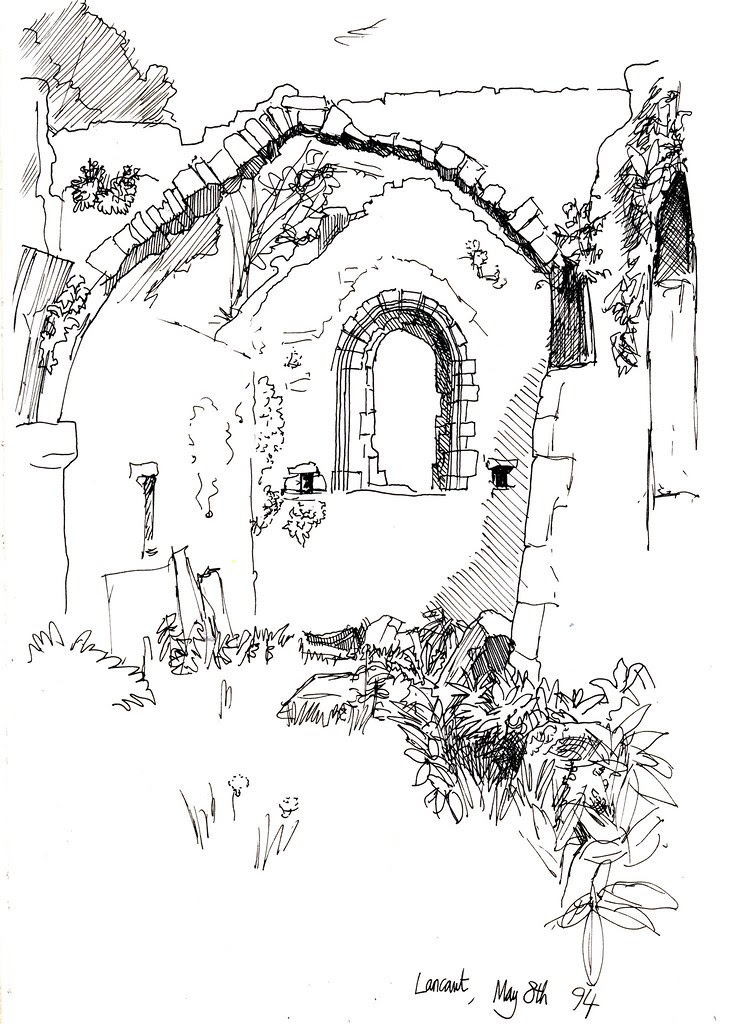 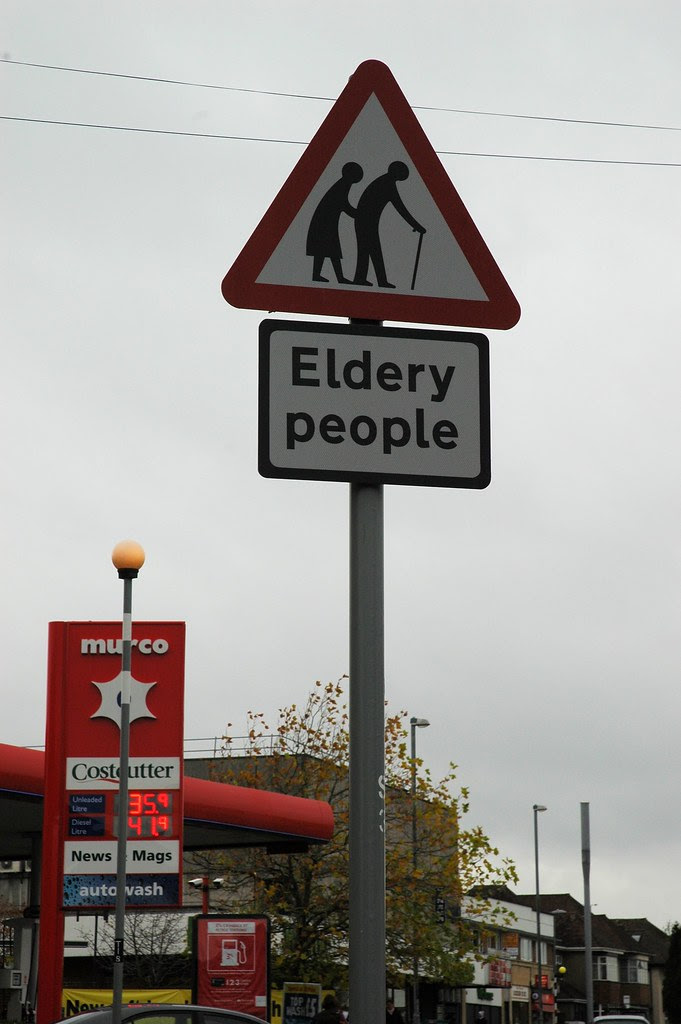 Bristol City Council have recognised the dangers posed by homemade wine, as you can see from this local road sign.

This is where Tania lives...

...and, just down the road in Portishead we find the Flight of the Phonics.

Today's blog post is brought to you by the letter C for schadenfreude...
Posted by Dru Marland at 06:44 6 comments:

After the recent exhibition of my pictures at the Oxfam Bookshop in Cotham, Peter and Lucie Wise of Bristol's Minuteman Press thought that it might be good to do something similar in Bedminster.

They've done a terrific job of hanging the pics, and doing great big A1 reproductions of some of my pictures in the window. Which kind of figures, since that's their business, and very good at it they are too!

50% of any sales of my pictures at Minuteman will go to Oxfam.

The prints (limited edition giclee) cost £25 unframed, or £40 framed. Except the little one of the three hares, which will cost you £20 unframed, or £30 framed.

Thank you, Peter and Lucie. And Ryan, for the coffee! 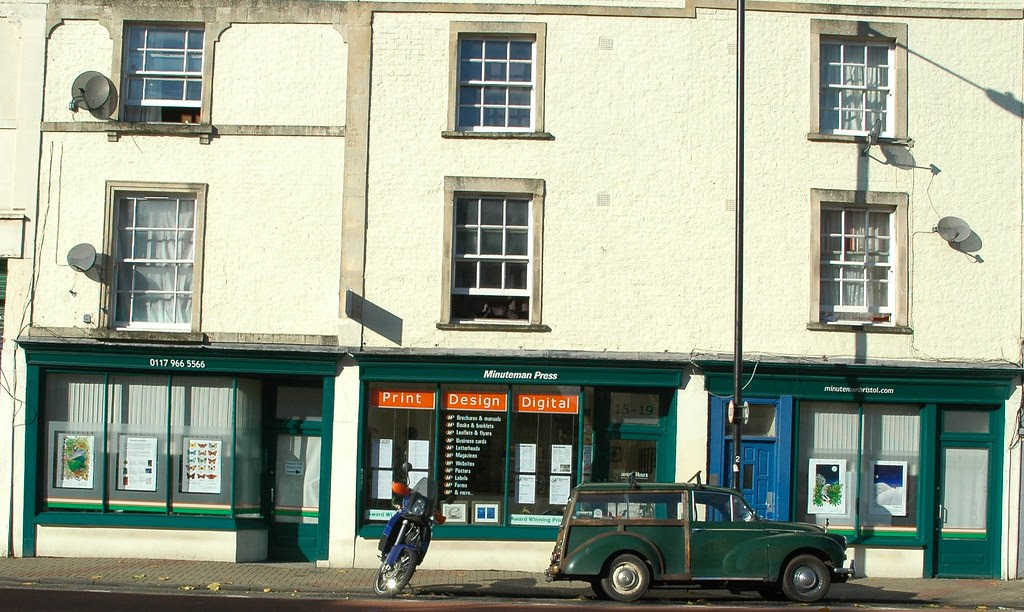 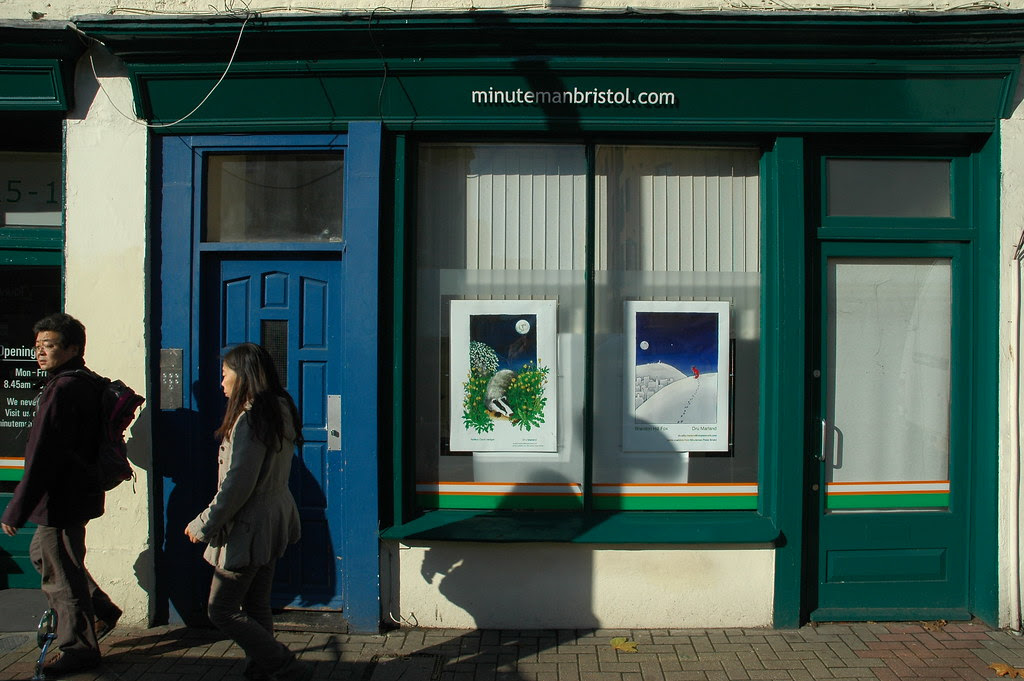 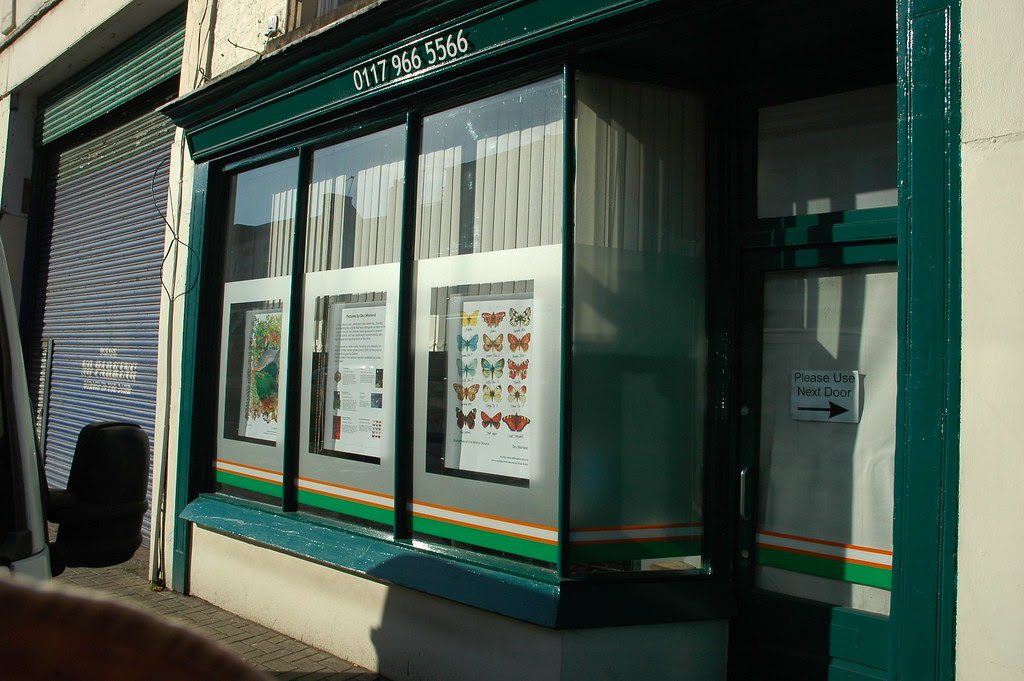 getting knocked off my bike: closure

Just over three years ago, I was knocked off my bike. The driver pulled out on me as I was turning into a side road. I sustained broken ribs, a banged head, and sundry cuts and bruises. The police took no interest in the case; indeed, the chap at the Collisions Support Unit told me that they had considered charging me....

Three years later, after assistance from a local bike-friendly law firm, I've finally got closure of a sort; yesterday a cheque arrived for just under £3000.


I'm pretty certain that the photographs I took at the scene, which contradicted the allegations made against me, made all the difference to my claim. If there is a perception that the police side with the motorist in the case of any incident involving a cyclist, then my experience did nothing to weaken that perception.

I always carry my camera anyway (the day it doesn't go out with me will be the day that something incredibly interesting will happen, of course).

But I'm also thinking of getting a helmet cam. Even though I hate helmets.