I was sitting quietly at my desk yesterday morning when there was a roaring from outside. I reasoned that it was either a dragon hovering over Westbury Park and breathing gouts of fire down on the carefully-tended back gardens (easily outclassing the rather expensive barbecue of our Very Aspirational Neighbour), or a balloon flying over.

It was the latter, of course. I scurried up onto the roof and waved as they went by, then pursued them on the bicycle, cutting easily through the morning gridlock that always happens at the end of my road.

They came down next to the White Tree roundabout.

I like the word gonflage. It sounds like it should have something to do with the Montgolfiers.
Posted by Dru Marland at 06:45 4 comments: 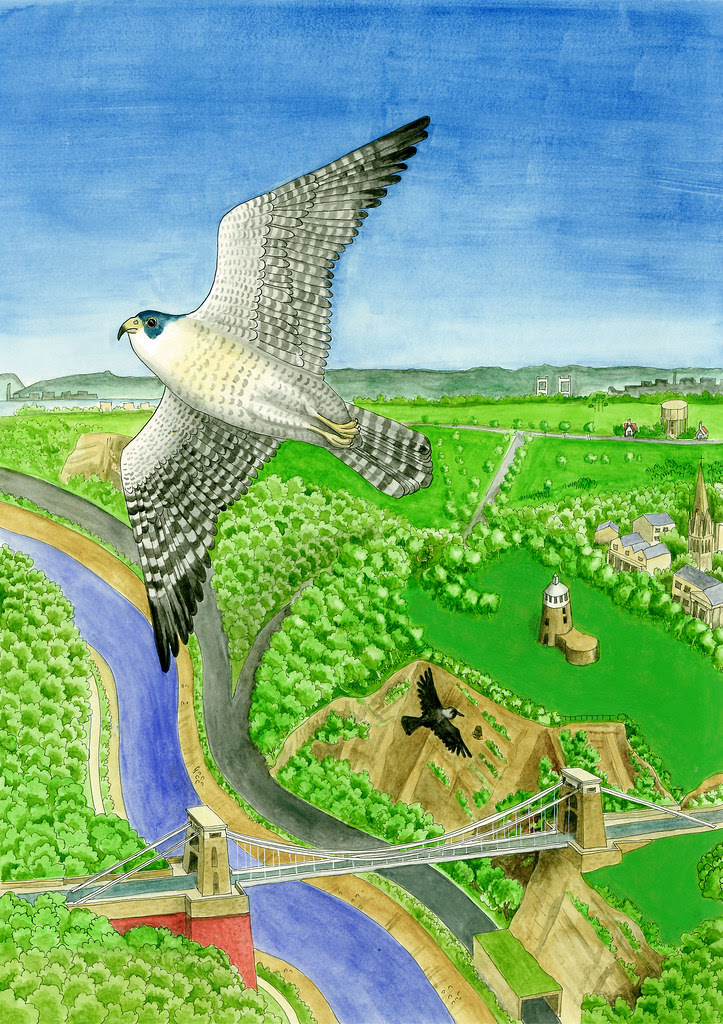 Low profile time again at Schloss Marland. I finally finished the cover picture for the Downs Wildlife book, and got a scan of it back yesterday, so I could see what it looks like when it's scaled down. And now you can too. Crikey, it seemed to take for ever, this picture.

I went out cycling with Annie yesterday; she's trying out my old bicycle, to see how well they get on together. We rode around the Downs and ended up in Clifton village, by which time it seemed like a good idea to have a drink. So we did.

We were intently talking about Stuff (you know, as you do) when out of the blue a bloke plonks his drink on our table and inserts himself into the conversation. Which is not so much of a conversation as him telling Annie (or, more particularly, Annie's cleavage) that she had lovely eyes. And so on. And on. Talking about her in the third person, as she subsequently noted.

I hadn't picked up on that, and I'm trying to deconstruct the personal narrative that he was living in during this exchange. Like, does he look at himself in the third person too? This is of particular interest as there's a rather heated discussion about autogynophilia going on, on a forum I use. It's a cruddy theory, but some TS women seem to self-identify with it. My take on it is that we all have a version of ourselves in our heads which acts out our imagined life on our behalf; personally, I experience this world of the imagination through my own eyes, but AG theory seems to argue that those to whom the condition applies see themselves from outside themselves. Living in the third person, as it were. As, it seems, this bloke was.

Must do some more thinking about this. And preferably not when hung over.

Anyway, back to the pub. Annie is polite to him (he has by now focused on her and has his back to me, and is no doubt wishing I'd go away) but firmly suggests that we would like to return to our conversation. So he finally goes away.

O well, another first. I missed out on all this sort of stuff pre-transition, as I didn't 'hit on' women, and obviously wasn't 'hit on' by men. Well, apart from a couple of times when a gay man tried it on... but this was like a shark attack, out of the blue and taking me by surprise. Slightly shocked, in fact. Even if the shark was toothless.
Posted by Dru Marland at 06:14 10 comments:

... I've been out and about over the last few days, showing some visitors the sights of the Wess Vinglun.

And I introduced them to Pie Minister... 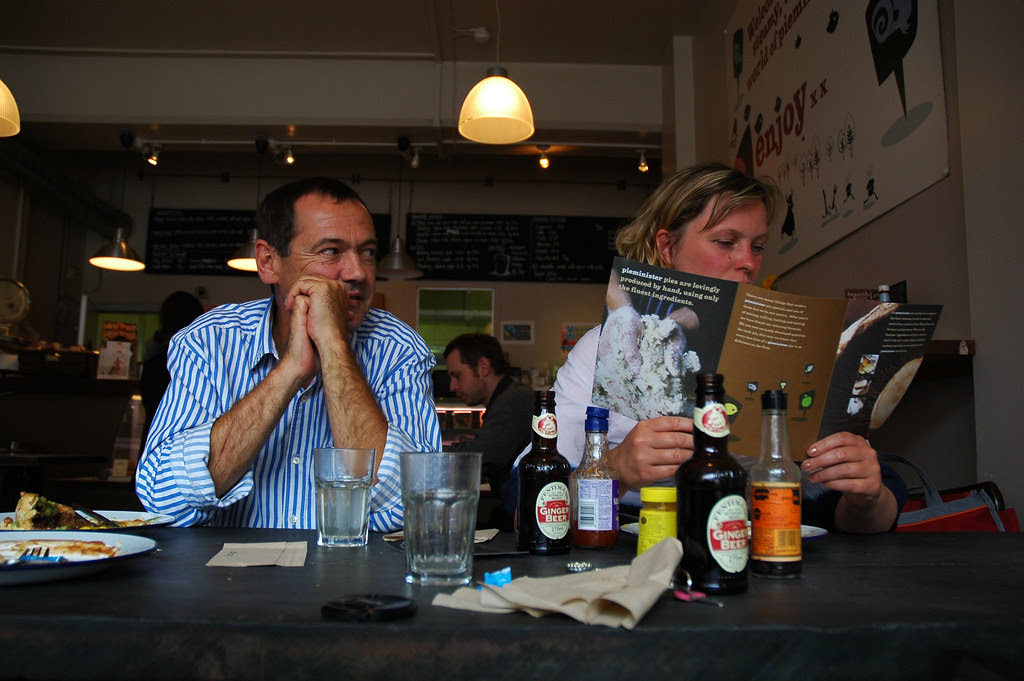 ...and the Cotham Porter Stores (one of Bristol's last remaining cider pubs). And lots of other places too. It's good having visitors, so you can get to go places you don't usually go.

And now it's back to the drawing board.
Posted by Dru Marland at 05:51 4 comments:

and the answer is...

..here's the back story to the pink saddle.

The one in the blog entry before this one.

I'd fitted it to the new bicycle (see photo above) and had been using it for a couple of days to see how it was. It was OK; comfortable, if slightly forward-canted for my taste - I'm more used to a very upright posture.

Sunday I met C, who looked at the saddle and immediately said, "That's obscene!"

I was a bit taken aback. I wondered if maybe she was a bit sex-obsessed - for some reason, people who have done English degrees tend to see sexual imagery absolutely everywhere. Maybe it was my failure to do so that meant I didn't get a First. Or a Two One. Or a...

Anyway, hence the request for feedback here. Thank you, everyone who commented.

The pink saddle is very well designed and built, but I can't get the imagery out of my head now. So the Brooks saddle is now in place, as you see.
Posted by Dru Marland at 04:12 7 comments:

It's the Terry Donna's Butterfly saddle. Please tell me what you think of it. Preferably without reading other people's comments first.
Posted by Dru Marland at 08:15 8 comments:

Return of the interview that disappeared

Richard and I were interviewed by Gerry Ryan on Ireland's RTE2, on May 14th. I had posted a link to the show, but, last time I tried using it, I found that the show in question is no longer accessible.

Never mind, for here, dear reader, is the interview, now in glorious sensurround technicolour. Enjoy. But make a cup of tea first, it's a long 'un.
Posted by Dru Marland at 12:26 6 comments:

I am perking up. I've made some good progress with the drawing, and am halfway through a cover design for the Downs wildlife book. Starting is the most difficult part; I end up worrying so much I can't put anything down on paper. Which is not good for the career prospects, all things considered.

Thank you for the messages, you who sent me messages. I appreciated it.

L to R: Catherine, Angela and Amber
Meanwhile, this weekend saw the BBC Festival of Nature in Bristol, and Angela Wilkes, author of Wildlife Rescue (lavishly if not sumptuously illustrated by me) came up to town for the occasion to launch the book. Pauline, of Secret World Wildlife Rescue in Somerset, came along with some animals to liven up the proceedings: Amber the kestrel; a couple of field mice and a noctule bat, unnamed; and Keith, a fellow rescuer who dislocated my little finger with his handshake.

Lots of people came to say hello to the animals. During the course of the day a book was sold. I wandered around grabbing freebies, and taking pictures, like these... 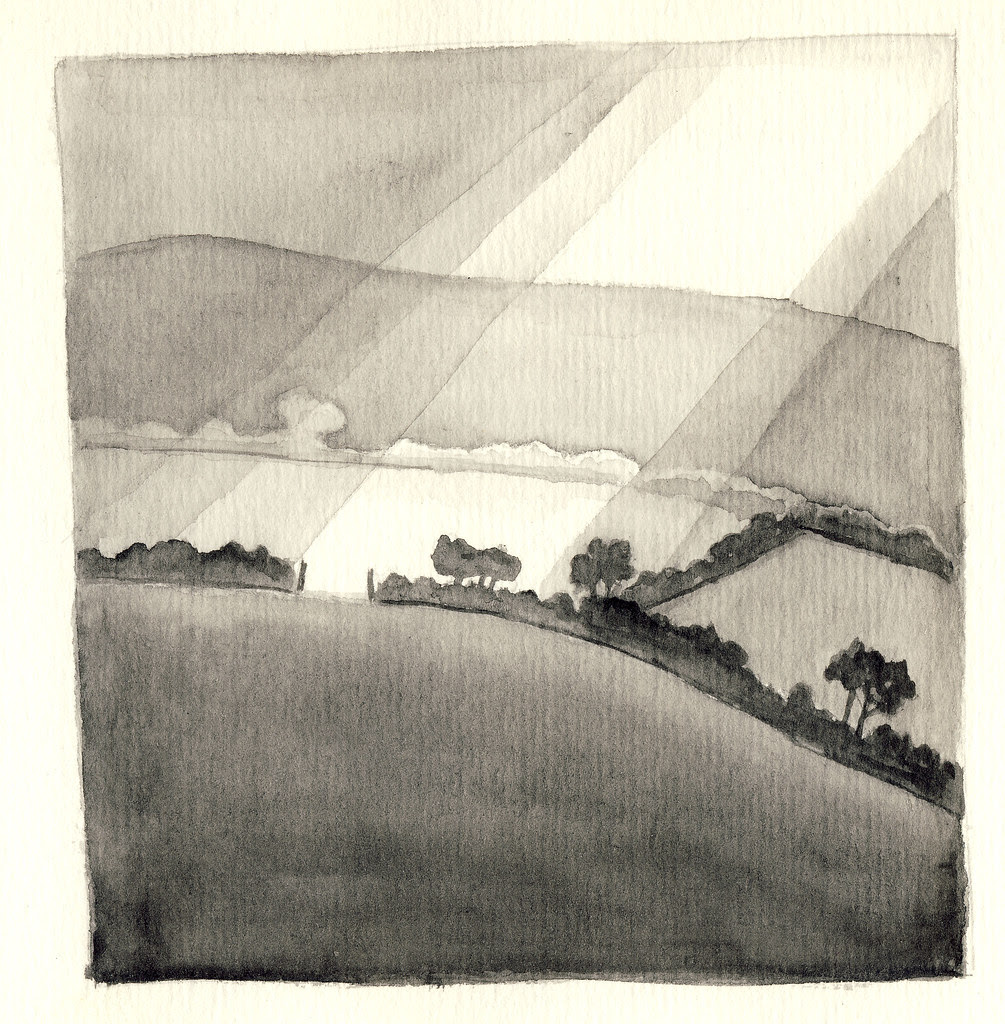 Not feeling very bright at the moment; I think that I'm having a reaction from all the activity of the last couple of weeks. So in lieu of any great thoughts, this is a picture I did to accompany a poem by R S Thomas. It's a sort of South Wales picture. We'd have been doing the haymaking at this time of year, back on the farm, and relaxing in the shade of the hedges with bottles of Newcastle Brown. Sometimes I'd find old bottles in the hedgerows, thrown there by the people doing the same work fifty, a hundred years before.

Farm's gone, blasted away by a quarry company. I read this poem to my father as he lay dying, six years ago.

I have seen the sun break through
to illuminate a small field
for a while, and gone my way
and forgotten it. But that was the pearl
of great price, the one field that had
treasure in it. I realize now
that I must give all that I have
to possess it. Life is not hurrying

on to a receding future, nor hankering after
an imagined past. It is the turning
aside like Moses to the miracle
of the lit bush, to a brightness
that seemed as transitory as your youth
once, but is the eternity that awaits you.
Posted by Dru Marland at 21:25 14 comments:

My favourite sort of souvenir is the edible sort.

Though I'd make an exception for the bag of Camargue red rice that someone gave me a couple of years ago, which sat quietly on the top shelf for ages before suddenly bursting open with weevils and creating an infestation.

Crikey, that could have given Alien a run for its money.

So anyway, I brought back a bag of unbleached white flour from Pembrokeshire. It had been stone-ground in a watermill at St Dogmaels. I made a loaf with it yesterday.

Bloody disaster. It sank in the middle. Reminded me of that dispiritingly worthy bread that there was far too much of in the 70s and 80s.

This is what my bread usually turns out like. It's got some malt extract and some rye flour in it.

Oh well. Looking on the bright side, I popped into Howells in Cardiff and got some Marshmallow Fluff. And look, it's Malteser instant hot choc. Yay!

I'm back from the half-term camping trip. We went over to our favourite place, in Pembrokeshire. We swam in the sea - very briefly, in my case, as it was painfully cold; we ate fish and chips; we climbed Carn Ingli, whose head was in the clouds: Katie recalled our ascent of the Pyrenees, five years ago, when we drove up into the clouds and she was a little disappointed to find that they didn't feel like cotton wool. 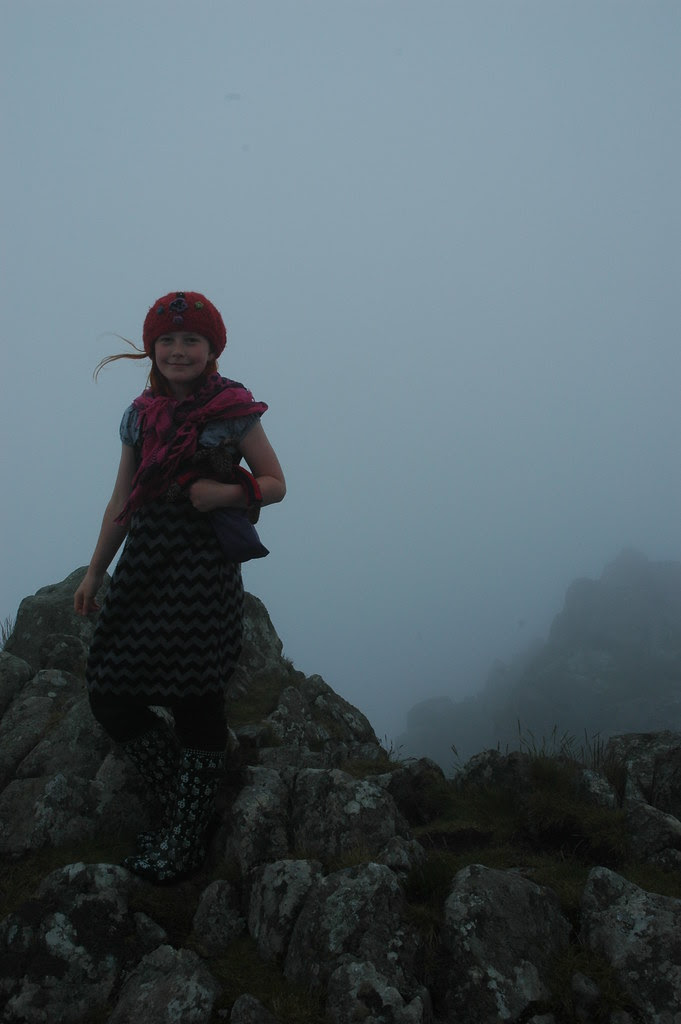 We did a lot of recalling; like when we stopped in Cardiff to see our old friend the woolly mammoth in the museum, which scared and fascinated Katie when she first saw it, and we've made a point of popping in to see it whenever we're in that neck of the woods. There's a lot of change in the air for Katie; a new start in a secondary school, and adolescence starting to kick in. So for a little while we found some comfort in the familiar shared experiences, and wondered what the future would bring for both of us.
Posted by Dru Marland at 06:40 7 comments: