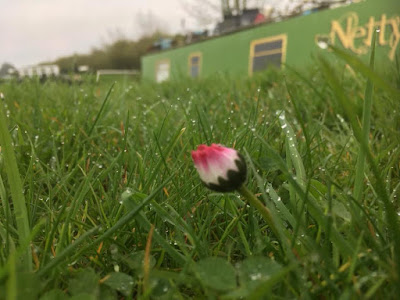 We came up the Caen Hill locks yesterday. We were short handed; one of our crew of volunteers had to go and do a photoshoot at short notice; and Michelle tried to get here from Hilperton to help but was thwarted by a puncture on her bike - there's a lot of hawthorn lying around on the towpath. Liz came over from Semington, though, which helped a lot. We breasted up the two boats and I drove them together; this saved time going in and out of the locks, and freed up Chris to do the lock working. An unfair division of labour, because it meant all I had to do was drive the boats and admire the daisies, as you see.
Anyway, we were all mightily glad to get to the top, and are now eating our way through all the pork pies and Tunnocks we got in for the flight crew's tab nabs.

waiting for the swallows 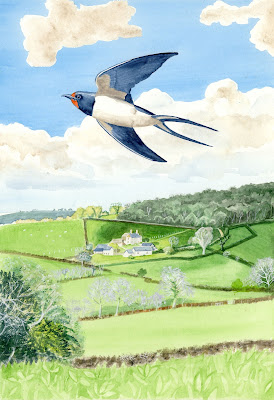 I’m by the bridge at Sells Green, to see the swallows come.
A boat called Foxhunter chugs past. It’s an hour after dawn.
Score so far: boats one, swallows none.
A cow clears its throat. The alpacas on the hill
graze in the lee of the hedge to ward off the chill.
The cockerel’s crowing from the farm, as cockerels will.
Alpacas: seven. Swallows: nil.
The chiffchaff in the hedge behind me packs it in.
Oh, then it starts again. The woodpecker begins
to drum, then laughs. It’s cold in this wind.
Bloody canada geese. Swallows? Not a thing.
A rush of song from an unseen wren.
The woodpecker does its impression of Sid James,
somewhere over there towards Rusty Lane.
Oh! The first blackcap! In the hedge there, then
answered from the llama field.Ten out of ten
For the blackcaps! Swallows? Nowt again.

Stiff fingers. Going in. It’s too bloody cold.
The sun looks like a dissolving aspirin. Two gold
-finches bob high over. Vapour trails have ruled
thin lines of shadow on the sheet of stratus cloud.
Blooming swallows. Shouldn’t be allowed.
Posted by Dru Marland at 07:33 No comments: