dhobi day on the boat


An article in the Guardian a couple of weeks ago looked at people who live on boats, particularly in London, as a solution to the housing crisis of availability and expense. A couple of comments I read as a response to the article reckoned that boat dwellers are smelly, which accords with my (thankfully limited) experience of the attitude that some people have to boaters as some sort of underclass, disreputable and probably on drugs, yadda yadda....

Anyway, some people are smelly, and some people aren't. And that ain't got much to do with where they live. Still, as part of my occasional series of blogs about Life On Narrowboats, here's how I do my washing.

After I've showered, on a washday, rather than pump the water overboard I bale it into a basin and add it to my twin tub washing machine.

Meanwhile, over on the Morso Squirrel, a kettle has been simmering, and I add the water to the mix to bring the temperature right up

Then I put the Honda generator out on the back deck, and set it running. This is an opportunity to charge the 12V domestic batteries, too.

I can then set the washing machine going. The spin drier is very effective, more so than a normal automatic machine, and two rinses are usually all I need to do

And then I hang the clothes in front of the stove. The atmosphere in the boat is a bit heavy with heat and moisture for a few hours, but then it becomes far more bearable and the clothes dry very nicely.

The Questing Vole cards are proving popular... I was distributing them around Bristol on Wednesday, and this morning was in Devizes and Seend, and sending a parcel of them off to Australia! If you'd like some, they're available in my Etsy shop. I've also had some printed up as giclee prints, and the picture is available in a limited edition of 50. You can get one here,  again in the Etsy shop. 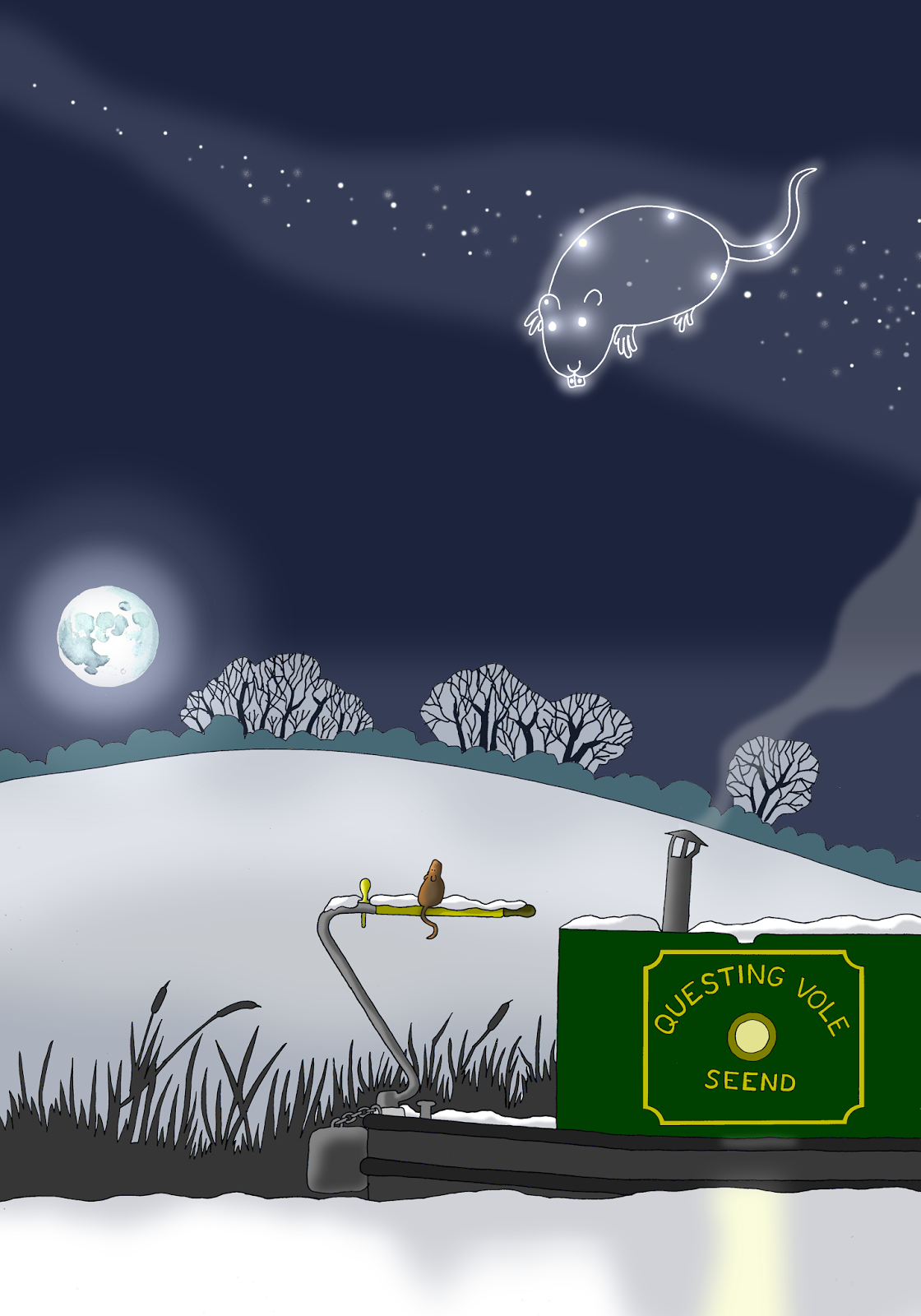 Here's this year's Christmas/Solstice/ Winterval picture. I've thought of renaming Eve so that she becomes Questing Vole, but Eve is easier and quicker to signwrite.... and a good name of course.

Why shouldn't voles have their own constellations? I was chuffed this year to learn that the Welsh name for the Pleiades is Saith Seren Siriol, or the Seven Friendly Stars. Here they've become a vole... if you look for them in the night sky they'll look far smaller than this, but my artistic licence is still valid so nerts.

I'll be printing these off ASAP, and putting them up on my Etsy shop and on Gert Macky, of course....