dry docking a narrowboat in Bradford on Avon 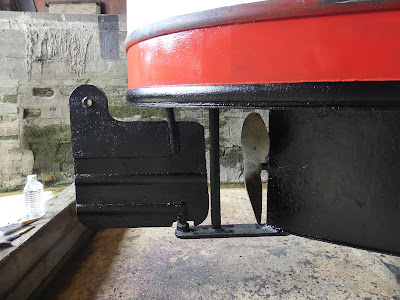 Back in March, my boat insurance renewal letter duly arrived; we have pleasure in offering, etc  etc...  and please send us the hull survey as mentioned last year.

As mentioned last year? I checked through the correspondence. Yup. No marks for observation there, Dru.

Canal boats more than 20 years old need a periodic survey of the hull to ensure that they're not just about to sink. They also need to come out of the water every now and then to renew the hull blacking,  either a bituminous paint or the more expensive and durable twin-pack epoxy, Mine was last done five years ago, when I first got the boat; and I've been not-quite-getting-round-to-it ever since.

This time though, it was essential. I phoned the insurers, who were willing to extend cover until I could get the survey done. Dry dock facilities on the Kennet and Avon Canal are all constantly busy and with long waiting lists. I was fortunate to get a cancellation slot at Bradford Wharf, a very congenial outfit run and administered by Ted, Iolo and Jassy.

I went into the dock on Monday morning, the water gurgled away and there was Eve sitting on the blocks. Ted set to work with the pressure washer, removing the weed and mussels that had been hitching a ride for so long. Much trepidation on my part. What state would the sides be in? There's a fair amount of pitting, caused by galvanic action; a lot of this happened before I got the boat and it was in a marina, where this is always a problem, when boats are moored close to each other and plugged into shoreline mains electricity.

Lee Cudmore-Ray, the surveyor, arrived and set to work with his ultrasound tester. In time, the entire boat was adorned with chalky hieroglyphs. The verdict appeared to be that the hull's pretty sound, but there were a couple of spots where the pitting was quite deep, and Iolo duly filled them in with the welder. 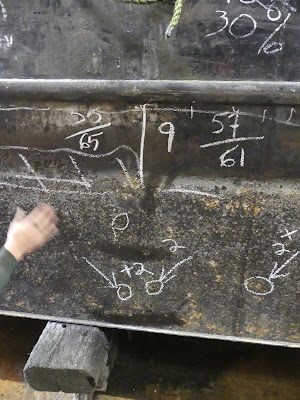 Then Ted put on the first of three layers of blacking. 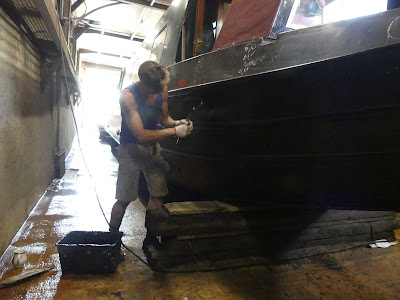 ...and welded on two extra anodes on each side, equidistant between the ones fore and aft. Sacrificial anodes absorb the mischief that stray electricity wreaks on hulls, and die so that the boat might live. They are unsung heroes, out of sight below the waterline and so often out of mind. 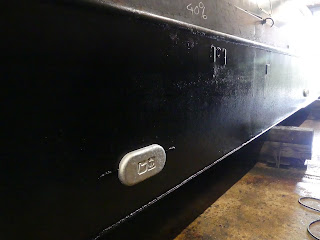 After three coats of blacking and an overnight rest, the boat was ready for the water again. 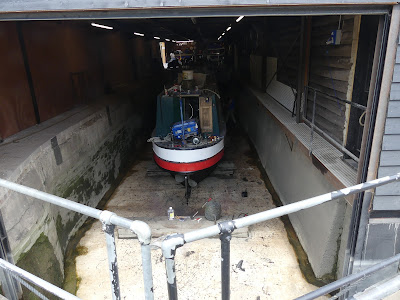 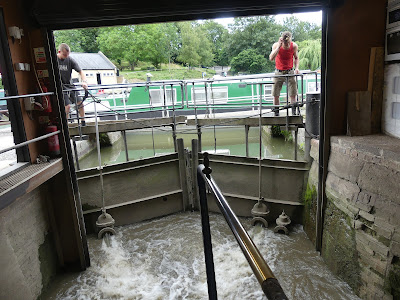 ...and we were back to that happy feeling of water under the hull.
Posted by Dru Marland at 06:23 4 comments:

a recipe for making and cooking seitan 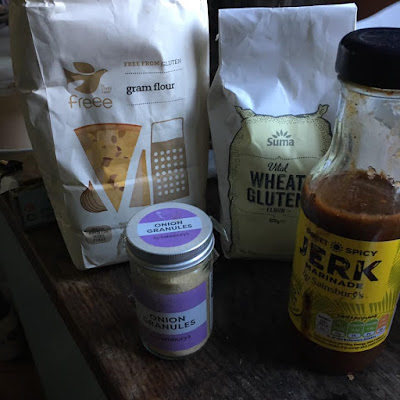 Seitan is a good protein food, similar to tofu and tempeh in its use as a meat alternative. Its main (and sometimes only) ingredient is wheat gluten, sold as 'vital wheat gluten'. It has a chewy texture similar to chicken. And it has little to no flavour of its own, so you need to add that, either as an ingredient or by marinading, or by both.

I added some gram (chickpea) flour. You don't have to; you can always try alternatives. But this is the recipe for what I did.

marinade (in this case, a bottle of jerk seasoning because that's what they had in Sainsburys)

Mix the dry ingredients together, then add the dash of oil and stir in water to make a slightly sticky dough. Knead it; it very quickly becomes quite resilient and bouncy, in a way that you'll recognise if you're a bread maker. 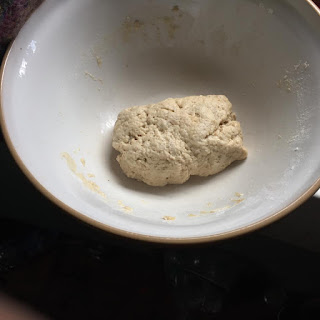 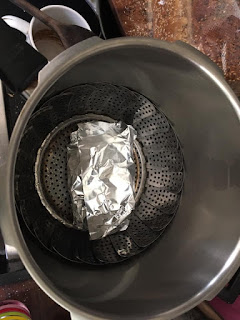 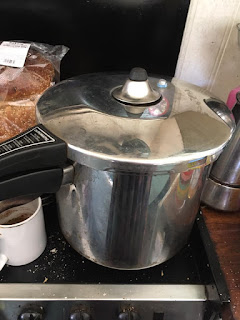 Take the steamed seitan out of the foil, and slice it 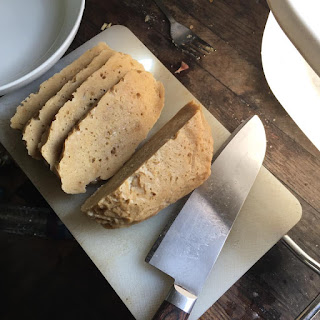 Marinade it. As I'm frugal, I pour the marinade on each slice then stack the next slice on top, and then wrap them all back into the foil to seal in the flavour (and keep the flies off, because I'm on a boat and there's lots of flies and no fridge) 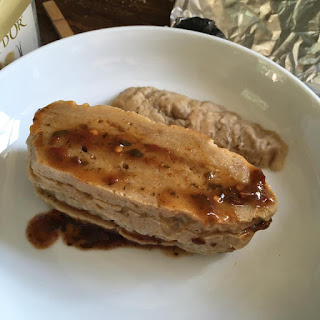 Marinade for as long as you like; maybe overnight if you thought that far ahead. In this case, I left it for an hour. 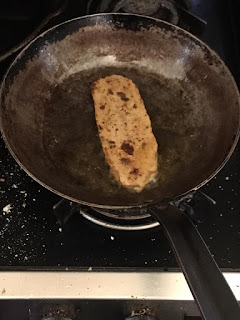 Fry in oil over a fairly high heat. The seitan readily takes on a brown and crispy coat. 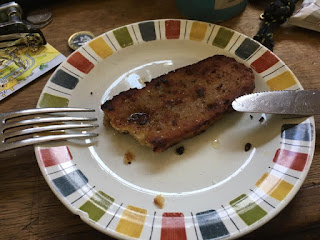 Serve. This was the first slice from the pan, and the first time I'd cooked seitan. It was good; a very nice chewy texture. The seasoning was OK, but I'm going to try to create a fuller flavour using tamari, tomato paste, maybe liquid smoke.

The hardest part for me was sourcing the vital wheat gluten. I tried nearly every wholefood shop in Bradford on Avon, Bath and Bristol and none of them had it. Then I found it in the local Co-Op.
Posted by Dru Marland at 06:52 3 comments: