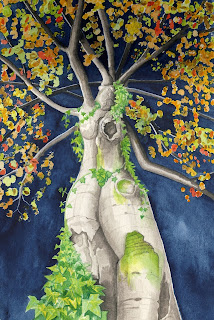 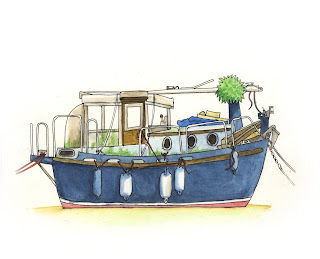 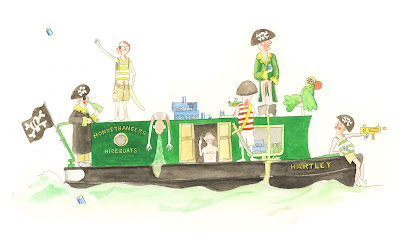 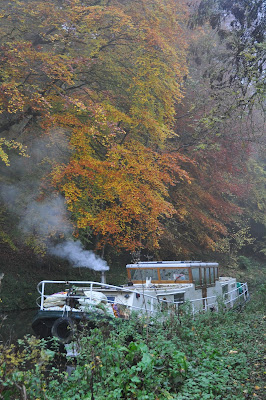 Such a long, still autumn was bound to come to blows eventually, but I was grateful for it while it lasted; the mild, still days succeeding each other, as the woodlands’ colours insensibly varied and deepened; olives, russets and deep scarlets that slowly turned to ochre and umber. In the thinning woods that overlook the cut, the stars can be seen at night; the fox barks, the tawny owls call to each other in the half light, and a single cronk announces start of the heron’s day shift. The soundtrack to the greyer of days is the dreary Farrow and Ballery of the nuthatch. The light breezes pick out an individual tree that has decided its moment has come, and whose leaves stream, swirl and eddy away. The big ash tree under which Neil had moored his beamy dutch tjalk Swaere Shaep had been steadily dropping its clusters of leaflets till his upper deck was almost obscured; “I think I’ll move up to Smelly Bridge”, he said ruefully, and did so, just in time. Perhaps it was a particularly cold night as well as blustery; the morning after All Saints Day found all the ashes along the towpath bare, with great heaps of leaves below them.

The next morning I emerged to find an ash tree had fallen across the canal in the night. Traffic along the canal is light at midweek in this season, but already a hireboat and another narrowboat, heading for Semington Dock for blacking, were moored up and their crews pondering the fallen tree, providentially lying across a disused stop lock, so the water was narrower and bounded by walls. I brought out my bow saws, billhook and rope, and balanced across the trunk and main bough, feet on the one and hands on the other; slippped off as I approached the other shore, clouting my face on the trunk and tasting blood, dangling foot just touching the water through the brambles; hauled myself back up onto the bank, and got to work. The men from the hireboat were very happy to haul on the rope that I belayed round the trunk, when I should finally cut my way through it; I reckoned that repeating the procedure on the bough would clear the navigation and allow me to be returned to the other bank by an advancing boat. So I set to with the saw.

It’s a weary old business cutting through a big trunk with a bow saw, even a bow saw with a good blade. I’d got about two thirds of the way through when the Canal and River Trust workboat appeared round the corner from Dundas, ablaze with the hi-vis jackets of the half dozen volunteers. So we paused to let them join us. Sadly, volunteers are not trusted with chainsaws, just more bowsaws. But I was happy to let two men take over the sawing, and meanwhile the workboat eased its bow under the trunk in readiness. Away came the trunk; astern went the boat; the hireboat crew hauled manfully on the rope, and the trunk was safely ashore, shortly followed by the bough.

Happiness all round; cheery salutes from the boaters as they passed on towards Bradford on Avon; and the workboat chugged astern to the winding hole and on, no doubt,  to a well earned tea break.

Good ash timber is never left lying around for long. I set to immediately, cutting it into portable lumps, helped by my neighbours Sarah and Ben, and it was soon piled safely outside my boat. As the rain began again in earnest, I got out my brolly and the Wray and Nephew overproof rum, and we had an increasingly hilarious little party on the towpath.

I figured it was time to get myself a decent chainsaw. My old Black and Decker electric chainsaw kept us in firewood for years in Bristol, where the winter storms provided a good harvest from the Downs; but it’s no use on the boat, beacuse my little generator isn’t powerful enough. So I went over to Devizes, and while I was there I called in to Devizes Bookshop to drop off some more prints; they’d sold a couple more last month from their upstairs gallery, which is always cheerful news. There was a little pile of copies of the new monograph on David Inshaw, in which and whose honour a dinner had recently been held in the shop, with the artist in attendance. I had to buy a copy, of course. 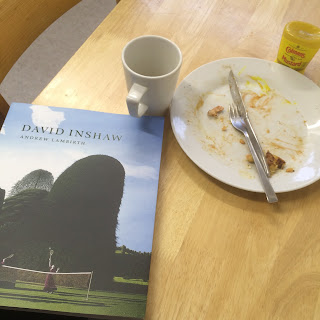 Roses Hardware is one of those shops that are far bigger on the inside than you might think from looking. At the back is a big yard where Shire Garden Machinery hang out. In both shops are the sort of men who wear blue overall coats and talk knowledgeably but without condescension about their wares. So it was a good place to go shopping for a chainsaw. Having decided upon a Stihl model, I was talked through How To Start It, and then we took the saw out to a shed and ran it up just to see. I swaddled it in the back of the car, and headed home.

The sawing would have to wait. The rain set in hard, and harder still in the night, and then before dawn the wind got up. By full daylight the boats were rocking gently and straining at their mooring lines, and the trees were roaring and swaying. I looked at the ash tree on the other bank, that overhangs me at a jaunty angle, and tried not to think of that character in The Woodlanders whose life is dominated by a tree which he thinks (rightly, as I recall) will one day fall on him. The leaves had begun to raft up in the water; with the gale, long skeins of them now formed, too.

Sarah and Bob stood by her boat, discussing the storms. Sarah was considering her move to Bradford on Avon; she is anxious to make sure that she complies with the CRT rules for contiuous cruisers, and had been kept by illness in the Bath area for a while. As we talked, three hireboats scudded by with the wind behind them, veering wildly on the corner before the aqueduct. I cycled down and checked the coast was clear, waved them on, returned. The Met Office app on my iPhone told me that the wind was blowing about 25 knots, gusting to 45, and that it was slowly moderating. Sarah decided to press on. I offered to tag along, as I wanted to go to the library anyway. She accepted. I dug out my oilies and sou’wester, doubled up my mooring lines, which had been pulling the pins out of the ground under the strain, and joined her, putting my bike on the roof.

It was an easy journey, as it turned out. We nosed past lots of fallen branches, and Sarah frequently had to run the prop astern to clear the leaves from it; on the few boats we passed, we exchanged the expressions of mutual esteem of those who are undaunted by, or at least caught out in, foul weather. Turning onto the Avoncliffe aqueduct, the full force of the gale hit us broadside on; but the heavy iron hull of Sarah’s old boat (it was built in the 19th century, apparently), combined with her helming skills, kept us neatly on course right down the middle, and soon we were moored under Neil’s now-bald ash tree.

After an hour in the library, I came out to find a clear blue sky and the air warm in the sun. All along the Avon valley the robins were singing. It was time to play with the chainsaw. 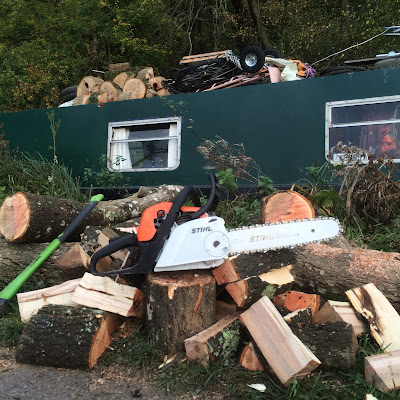 
All Hallows Eve, and all along the tops of the Leylandii that bordered the opposite bank of the canal, great clouds of small insects swirled, silent murmurations. Sometimes bigger insects (dragonflies?) darted into the cloud, hawking at them. Chris and Jinny from next door came out to admire the sight too; it was Jinny who learned from her dad that winter gnats is what these are.

I remembered a walk down the Honddu valley one Maytime, from Capel y Ffin to Llanthony. All along the river, the mayflies danced up and down, great clouds of them rising and falling. Returning the same way that evening, they lay dead all long the path.

But the winter gnats were still at it the next day. Not for them the poetic living-for-just-a-day.

A passing couple, properly attired in Stout Walking Apparel, approached, their trekking poles clacking on the path. Wishing to share the wonder, I pointed out the swirling insects and said "Look! ...."

The woman looked anxiously straight ahead and bade me a distant "Good afternoon", and they continued out of sight, looking neither to right nor to left.

Fair enough, you never know what you might catch from waterpikeys....