Cynddylan on a tractor

Cynddylan on a tractor, originally uploaded by Dru Marland.
Ah, you should see Cynddylan on a tractor.
Gone the old look that yoked him to the soil,
He's a new man now, part of the machine,
His nerves of metal and his blood oil.
The clutch curses, but the gears obey
His least bidding, and lo, he's away
Out of the farmyard, scattering hens.
Riding to work now as a great man should,
He is the knight at arms breaking the fields'
Mirror of silence, emptying the wood
Of foxes and squirrels and bright jays.
The sun comes over the tall trees
Kindling all the hedges, but not for him
Who runs his engine on a different fuel.
And all the birds are singing, bills wide in vain,
As Cynddylan passes proudly up the lane

This card was one of a series of poem postcards that Oriel Cardiff produced in the 70s(or was it 80s) -sadly, seemingly unobtainable now. Damn.

It was the centenary of RS Thomas' birth yesterday. I first met his poetry in Penguin Modern Poets 1, in the school library, and learned Welsh Landscape by heart.  Heard him read at Lower Machen church, not far from where I used to live in South Wales, where the 'mouldering quarries and mines' were all around; it was a memorable evening. Then in 2000, reading his obituary in the Telegraph, in the crew mess of the Dover ferry I was unhappily working on at the time, and feeling even more lonely.

Still, the poetry is still there. The Bright Field is one of my favourites, because it's twined itself into my own life. 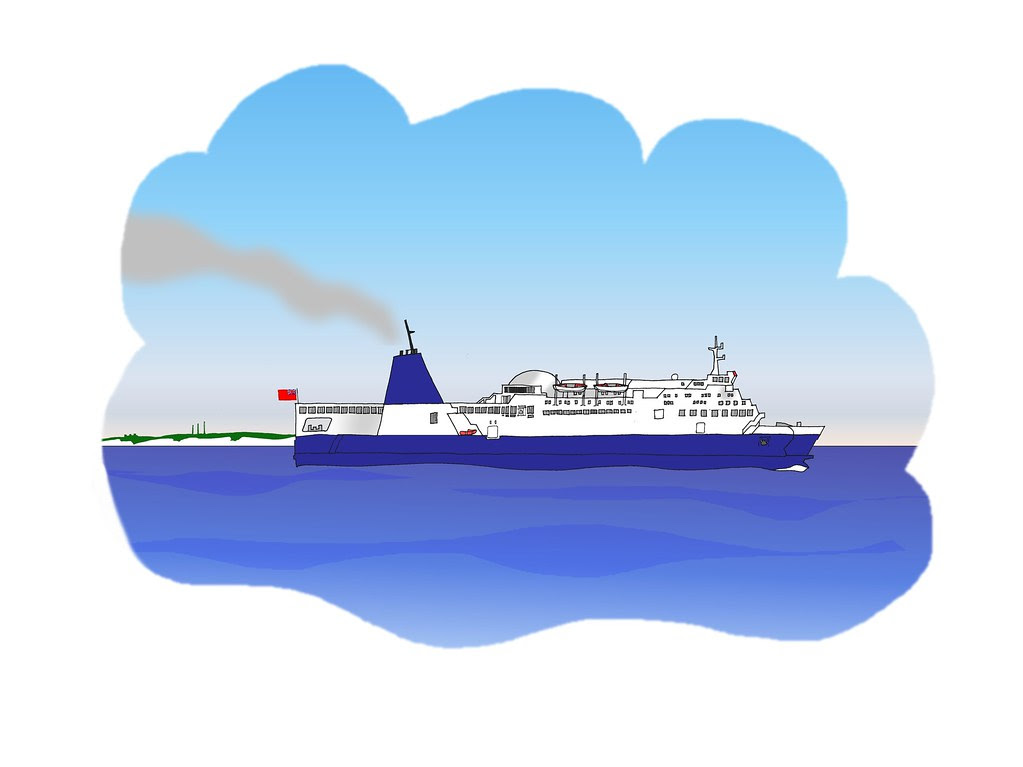 This day last year we were walking in Dartmoor and swimming in a stream. Today was far too cold for that sort of thing, so I painted this picture instead. Nothing like finishing a painting to cheer you up. Which, after a gloomy weekend, is a Good Thing.

Here's a Palm Sunday joke, from Giraldus Cambrensis. At least, I suspect that it was a joke, but he used it as an example of the poor standard of Latin among the clergy in Wales. You never can tell with Gerald.

Have you ever worked in a bar? It's an opportunity to see behind the polite mask of the people you serve; the pushy ones who jump the queue, the ones who treat you with contempt because you're a menial. It is a small insight into how thin can be the veneer of civilisation.

Coming out as transsexual gives you a much better opportunity to see this. For so many people, transsexuals are creatures fabulous as unicorns or camelopards, or as monkeys stranded on the shores of Hartlepool. And because they don't know how they are supposed to behave, they can behave very badly indeed.

It's not that they intend to be bad; it's just that some people fear what they don't know. Of course, the people of Hartlepool are rightly annoyed if you call them 'monkey hangers'. They will tell you that the monkey in question actually got on really well with the locals, all except for the village idiot, who was convinced that the monkey was a french spy, and sold the story to Richard Littlejohn, who denounced it in the Daily Mail. And then the monkey was constantly followed around by newspaper hacks looking for evidence of frenchness about it, until it despaired and jumped into the sea and drowned.

But that was long ago.

Just, maybe not that long.

Some will feel betrayed at the revelation of such a big thing, and go stomping off.

And so on. As for people who didn't know you before, their response to you depends on how well you 'pass'. As I'm talking about my experience in the early days of transitioning, then you can assume correctly that I didn't 'pass' entirely, if at all.

Some people just behave naturally, and good people they are too.

Some try just too hard. "Of course I see you as a woman." "Oh! I met a transsexual woman at a wedding in Bognor; she was really nice; do you know her?"

And then there's the monkey hangers. The blokes who sit in corners muttering darkly, making snide or offensive comments, misgendering you, sticking up little notices with obscene 'jokes' on.

I had a lot of that. It was relentless on the ship I worked on, for two years, from 2002 to 2004. I kept going because I had earned my right to work in that place, and I wasn't going to be beaten by them. But it was hard going.

I do recall the strong sense of betrayal I felt, in January 2004, when I read Julie Bindel's 'Gender Benders Beware' in the Guardian.  Because I expected stupidity and nastiness from my colleagues; but it was a rude shock to find it in a newspaper that I'd previously held in high regard. Although that article was an attack on transsexual identities as a whole (and Kimberley Nixon in particular) I did feel personally injured, not least because it came at a bad time and I was feeling very lonely.

After I'd been assaulted, I finally left P&O, and spent two years prosecuting a case against them. Those were very difficult times, and sometimes the struggle felt almost too hard to continue. I did think of suicide. The two things that kept me going were my daughter, and my determination that the people who had wronged me should not get away with it.

I was lucky. I got through it, and won. Which didn't stop the press from trying their best to put their traditional spin on the story, when it finally broke. But by then, I was on the attack. So I was not as damaged by their nastiness and prurience as I might have been some years before.

But it is still an awful feeling, to see yourself written about in an ignorant and prejudiced way, in a national newspaper. And to know that you have no voice of your own in the world, and no effective means of redress.

So the Press Complaints Commission has decided that Julie Burchill's  'Lobstergate' article was OK. No surprise there then; as the PCC stumbles slowly towards the dustbin of history, at least it is consistent in its uselessness. Missing you already, guys. Must find a special circle for you in the Venn diagram... 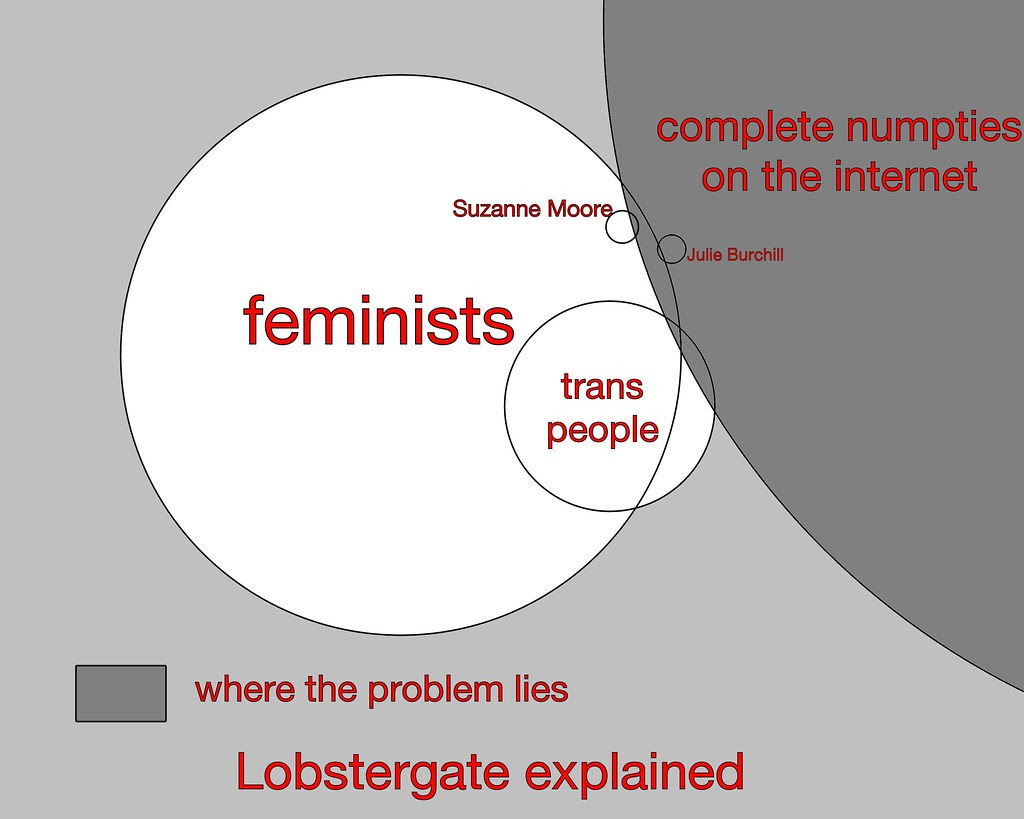 a lovely day out

I picked up the prints of Map Reading For Beginners from Niche yesterday. This one is being framed up for somebody. And there are some in my Etsy shop too. At the moment this is my favourite picture. Well, favourite out of the pictures I've done. Crikey. Just been looking through pictures by SR Badmin and Evelyn Dunbar and going 'gosh, that's good'.... so much art, so little time...
Posted by Dru Marland at 07:55 4 comments:

bones in the walls

Up in Crickhowell for a few days, I took some of my cards around likely places. Like Book-ish, a fine indy bookshop in the town. Emma is busily getting ready to open a second, more child-focused shop in Abergavenny, too.

In Abergavenny, I went to the Tithe Barn and had a nice talk with the woman on the counter (whose name I unfortunately forgot. Sorry.) about Partrishow, which is one of her favourite places too. 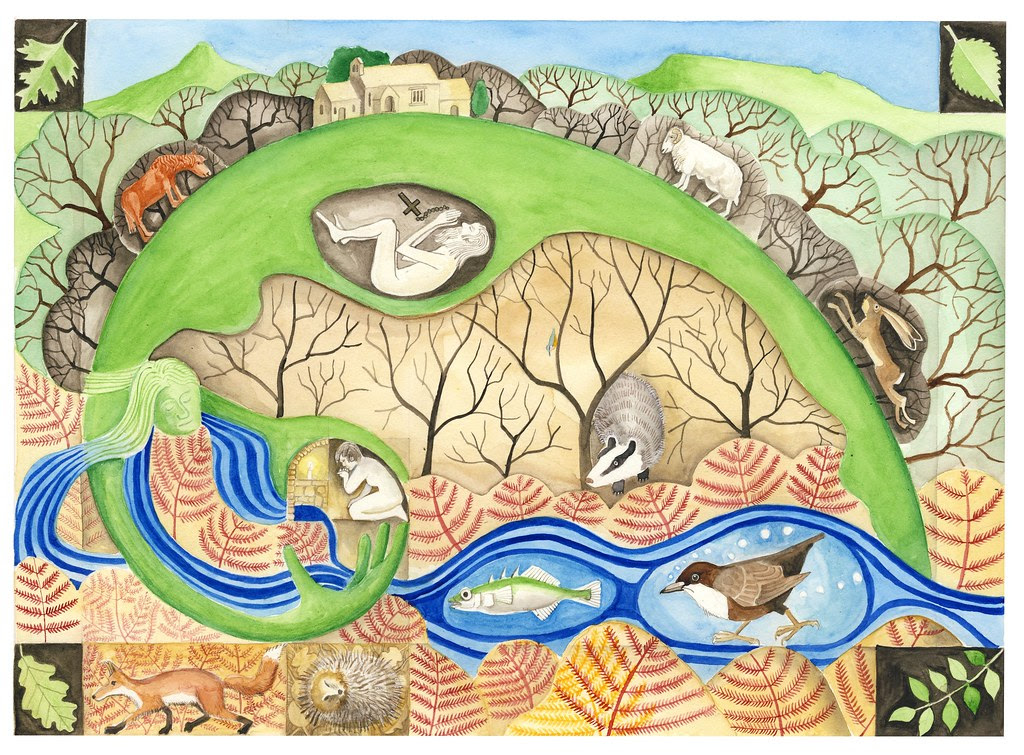 She said that when she was very small, her aunt told her that, in the olden days (it's always the olden days in stories), when the priests died they were buried in the walls, and the bones kept showing through however often they painted the walls.

map reading for beginners, originally uploaded by Dru Marland.
This picture's kept me occupied for the last few days. It's intended as the cover for Deborah's next poetry collection, a work in progress. The picture incorporates several elements in her poems, and develops some of the ideas behind my Partrishow picture. There's also a big nod in the direction of Kathleen Jamie's poem 'Meadowsweet', because it seemed to work so well with the picture and is such a good poem, in its turn referencing a tradition that 'suggests that certain of the Gaelic women poets were buried face down'.

I was down at the health centre the other day (routine blood test, blah) and found that they'd installed a new telly screen thing that played public information films about giving up smoking and not driving when you're tired. It also made announcements, calling patients to their appointments. Where previously the Tannoy system had the individual doctors mumbling self-effacingly into their microphones ("was that my name? I'm sure it sounded a bit like it...") or bellowing, as was their wont, there is now a cut-and-paste computer voice thing that does its best to read the patients' and doctors' names in English well-wrought.

All very entertaining it was too.

It got me thinking of other uses for this sort of software, and so I tried this:


And here is the result; the closing lines of Carol Ann Duffy's Prayer. Enjoy. 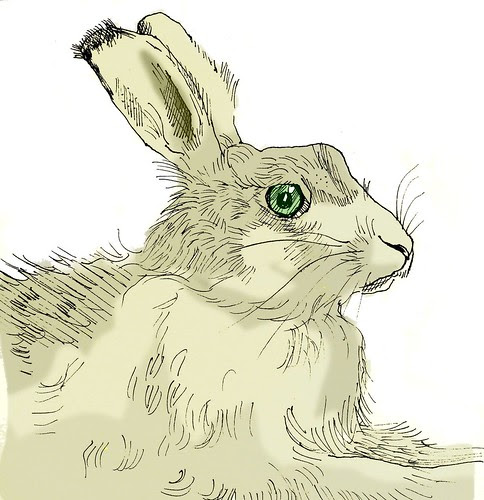 hare, originally uploaded by Dru Marland.
A hare for March, though this one is not going to be dashing around any time soon; it's in a case at Bristol City Muesum, still looking slightly aggrieved at having been stuffed.

The black headed gulls have got their new Lone Ranger masks on, as I saw yesterday morning while cycling out over the Downs. And in the afternoon the sky cleared entirely, and the day turned beautiful. As I was whizzing the circular saw around some MDF out on the road (don't want to fill the flat with sawdust) the silences in between the saw were punctuated with bursts of woodpecker drumming from the trees over the road.
Posted by Dru Marland at 06:38 4 comments: 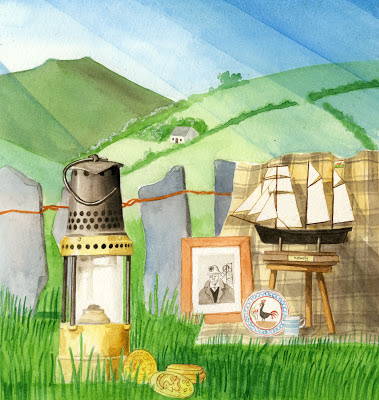 I early learned that brontosauruses
Are long as three red London buses
And all the folk in China’ll quite
Fit upon the Isle of Wight.
Rare indeed's the object which is
Not compared with football pitches
But other places try and fail
To be as close a fit to Wales as Wales.