a new pictorial map of the West of England 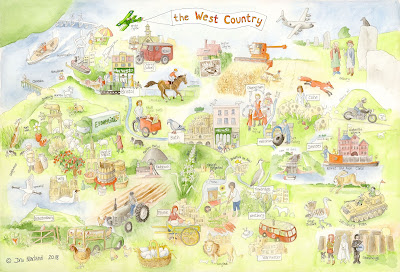 ...just back from the printers and ready for sale! It comes in A3 and A4 sizes and I've got it in my Etsy shop (link on the right hand bar of the blog here, or click here).

This was a commission for Harvest wholefoods in Bath, and was great fun to do but took aaages. And then I had to find a way to scan it; the painting is about A2 size, which is as big as I can reasonably manage in the limited space on my cramped and crowded boat. After a couple of failed attempts to get it done elsewhere, I bit the bullet and used my A4 flatbed scanner, and then stitched the 10 scans together. Which took even more aaages.

You may need to click on the picture to get a clearer view of it. There are several boaty types in there; and my Morris Traveller, doubling as a Glastonbury chicken shack. And a Vincent motorbike rorting past Silbury Hill. Slightly wishful thinking; last time I rode along that road on a motorbike, it was on my old MZ 250 with my flatmate Corrine on the back, and we were going back to Bristol after the Poll Tax riot. (We'd missed the riot, as it happens; we were at the very back of the march and it was going so slowly that we sloped off to the Tate. Bloody arty types eh?)

Attack of the Trans Cabal

...inspired, obviously, by Stephen Collins' rather wonderful cartoon. You may need to click on it to get it big enough to read.
Posted by Dru Marland at 06:06 No comments:

On Saturday, the Poets Afloat group had its first public airing, as part of the Seend Lock open day organised by the Canal and River Trust. The poetry event in the Barge Inn, next to the lock, was organised by Helen Wuscher, who, when she isn't working in the CRT Devizes office is busy putting on her one-woman show about Emily Dickinson, or writing and doing other stuff. She kindly suggested we might like to join in, and sifted through poems to make an appropriately canal-themed set list, comprising old and good work from Shakespeare, Kenneth Grahame, Patrick Kavanagh and the like, to modern and good stuff from folk such as Jo Bell,  former Canal Laureate and continual Good Egg; and us lot too.

And Nancy Campbell, the new Canal Laureate, showed up as well; not in the canoe that she's touring the network in, as it was probably a bit far to paddle from Oxford on a Saturday morning. But it was nice to meet her.

Gail Foster took some rather good photos in so unobtrusive a manner that we never knew about it, and here they are. Gail is another Poet Afloat, as she lives next to the canal in Devizes and has a special affinity with Bridge 140. Here's her blog. Go to her for photos, occasional verse and reviews in the Devizes area. 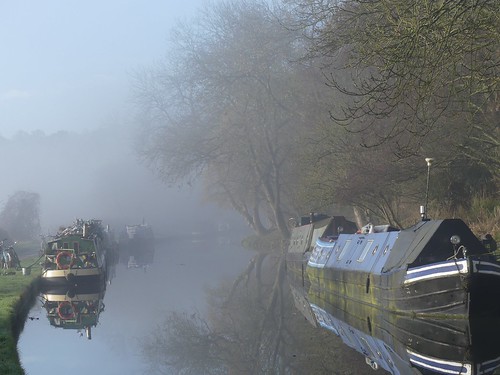 As TH White observed in The Goshawk, if you sit up in a tree, birds don't consider you to be a human, and cheerfully go about their business around you.

You get a similar effect living on a boat...

I've been collecting those towpath conversations that have come along, those thirty seconds of story that you get as the walker pass by. And here is a found poem from them.

You're being a snob

I'll tell you that

she takes a lot of recreational drugs

there’s kids in her class

an island on the Loire

it was in France. Let’s see, there’s the Loire

Mum, how did you fall out with dad?

what do you need a map for

before they go to school in the morning

it was in France and

do people live on these boats

there ought to be

that’s all that I can say

there ought to be rules and regs

not one of these go to work

not one of them

because they haven’t adapted to

a Clerihew for Frida Kahlo 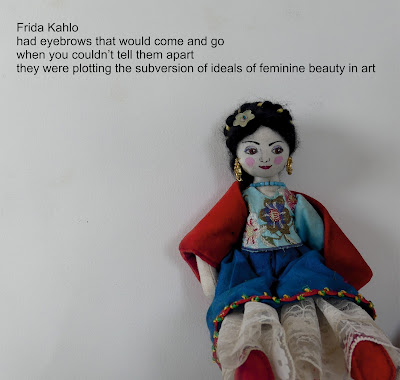 ...one for International Women's Day, which is today.
Posted by Dru Marland at 17:28 No comments: