A Cautionary Tale - or, I Metamorphosis From An Antique Land 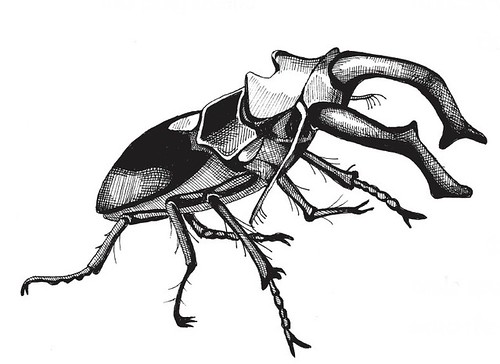 Greg Sams the cockroach once awoke
To find he'd turned into a human.
His family gathered round, and poked
Disgustedly; said "Look at you, man!
What happened to your carapace
So black and shiny? And your face!
Where's your mandibles and antennae?
Your legs? Good lord, you've hardly any!
Depart from here at once! Begone!
You don't belong under a stone!"
Poor Greg! Though we no longer see
His cockroach externality
He's still a taste for all things putrid,
And thinking he considers stupid.
Still, cockroaches are survivors- see!
He's now our UKIP MEP!

Continuing the theme of famous animals seen from the animals' perspectives. Sort of.  I'm in Bristol about to set off for Steepholm! More later, taters! 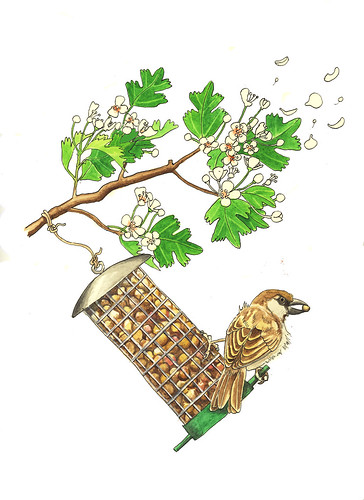 Oh bums! I should never have flown through that skylight;
It's gloomy and smelly, with great clouds of smoke;
And all these odd people in permanent twilight
All sitting there, listening to that funny bloke
Who's telling his beads with a serious expression
While looking at me in a way I don't like.
Think I'll crap on his head- that should make an impression!
Then bugger off out again into the light.


This is the sparrow's take on the incident described by the Venerable Bede in his Ecclesiastical History of England:


THE king, hearing these words, answered, that he was both willing and bound to receive the faith which Paulinus taught; but that he would confer about it with his chief friends and counsellors, to the end that if they also were of his opinion, they might all together be consecrated to Christ in the font of life. Paulinus consenting, the king did as he said; for, holding a council with the wise men,' he asked of every one in particular what he thought of this doctrine hitherto unknown to them, and the new worship of God that was preached? The chief of his own priests, Coifi, immediately answered him, "0 king, consider what this is which is now preached to us; for I verily declare to you what I have learnt beyond doubt, that the religion which we have hitherto professed has no virtue in it and no profit. For none of your people has applied himself more diligently to the worship of our gods than I; and yet there are many who receive greater favours from you, and are more preferred than I, and are more prosperous in all that they undertake to do or to get. Now if the gods were good for any thing, they would rather forward me, who have been careful to serve them with greater zeal. It remains, therefore, that if upon examination you find those new doctrines, which are now preached to us, better and more efficacious, we hasten to receive them without any delay."

Another of the king's chief men, approving of his wise words and exhortations, added thereafter: "The present life of man upon earth, O king, seems to me, in comparison with that time which is unknown to us, like to the swift flight of a sparrow through the house wherein you sit at supper in winter, with your ealdormen and thegns, while the fire blazes in the midst, and the hall is warmed, but the wintry storms of rain or snow are raging abroad. The sparrow, flying in at one door and immediately out at another, whilst he is within, is safe from the wintry tempest; but after a short space of fair weather, he immediately vanishes out of your sight, passing from winter into winter again. So this life of man appears for a little while, but of what is to follow or what went before we know nothing at all. If, therefore, this new doctrine tells us something more certain, it seems justly to deserve to be followed." The other elders and king's counsellors, by Divine prompting, spoke to the same effect.

a bit of a bike ride

You will remember that last week I had to nurse the Moggy back to Wiltshire after the clutch started misbehaving. Well, I hope you will remember. Pay attention at the back, there! ...so I needed some replacement parts, and rather than order them on the internet and hop that they'd be delivered to Jan's house in Holt before the weekend, I decided to cycle to Bristol to get the bits. Because it was An Adventure. And sometimes you've just got to do these things. 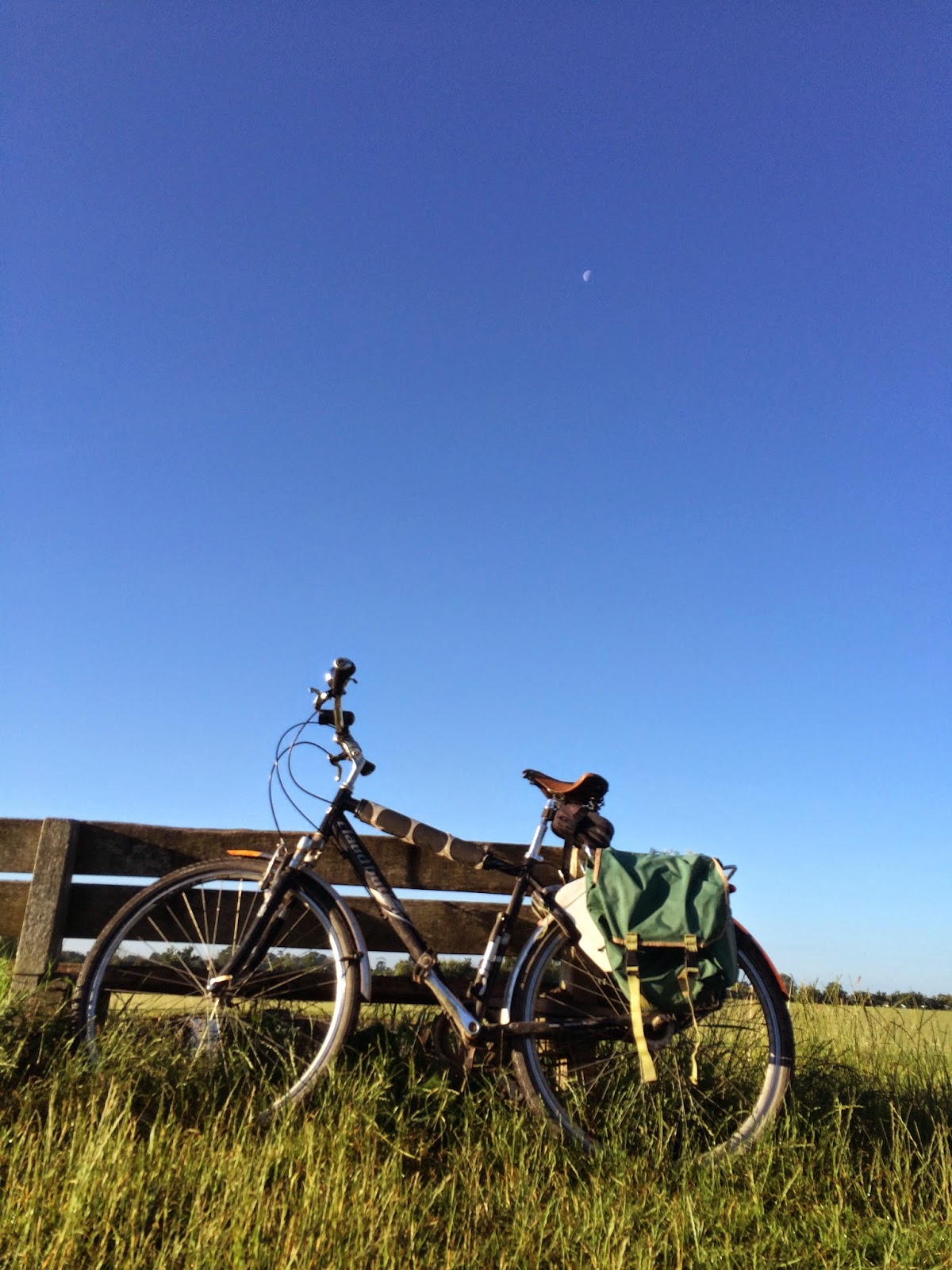 I think it was well before 6 o'clock in the morning that I set out, and a very good time it was to be travelling; quiet and cool. I paused near Trowbridge to listen to a distant yellowhammer, the first I'd heard this year. Look, it's my bike looking noble. I'd washed it specially. very dusty, towpath life. 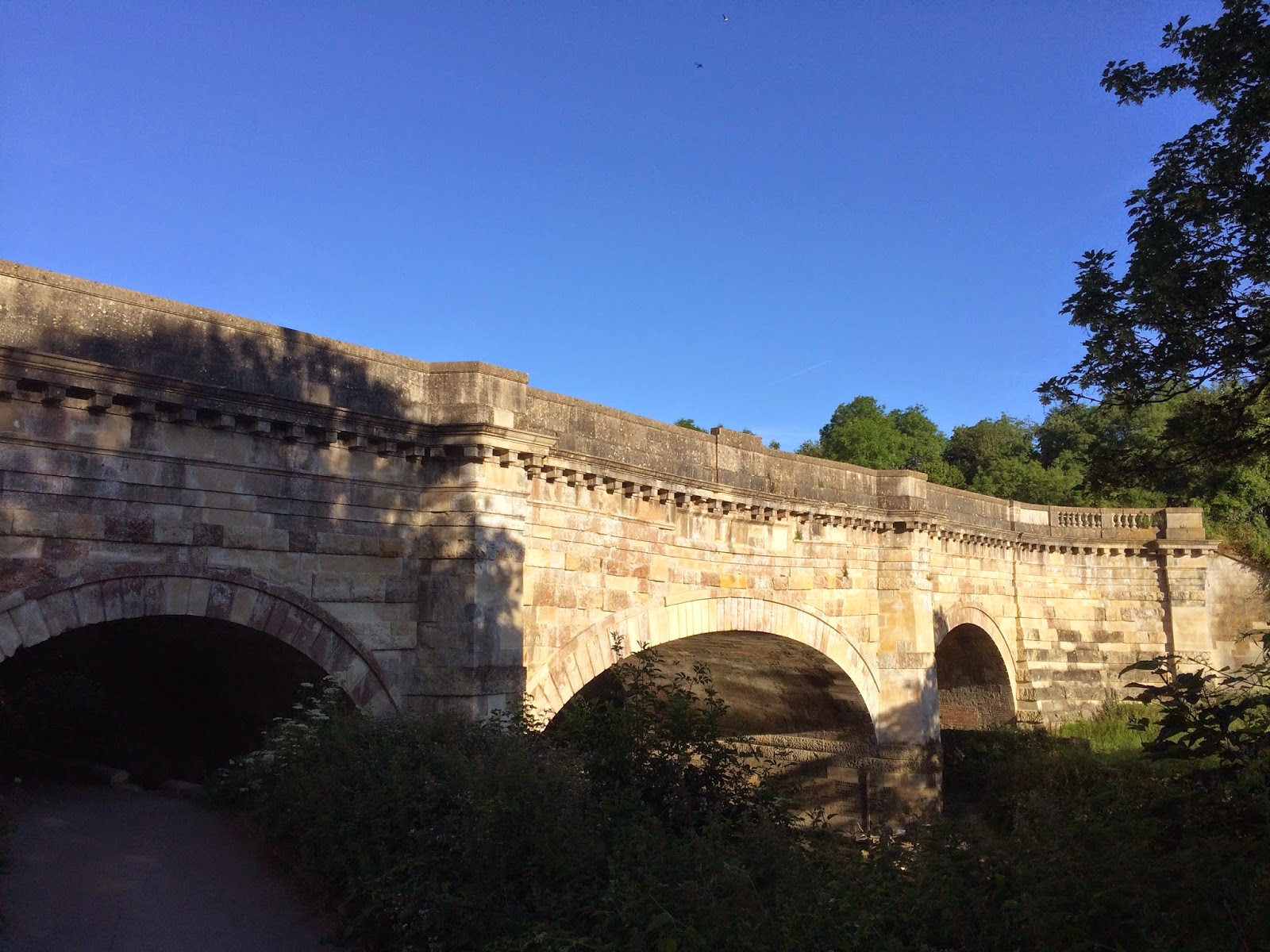 Here's the Avoncliff aqueduct, where I adjusted the angle on my only-just-fitted super hand grips. 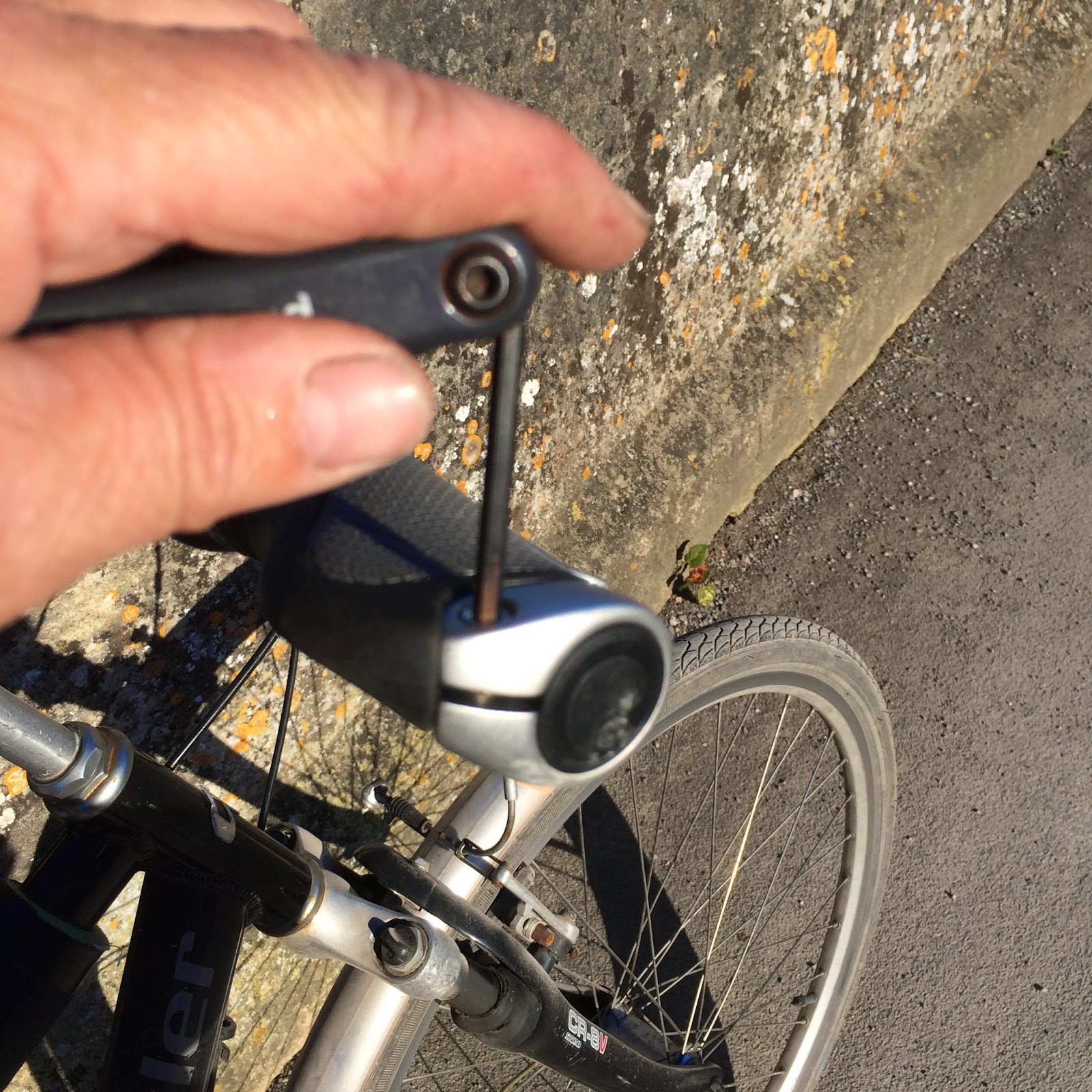 ...and in no time at all, here's the Dundas Aqueduct, where the early boaters were stirring (cups of tea, mostly). 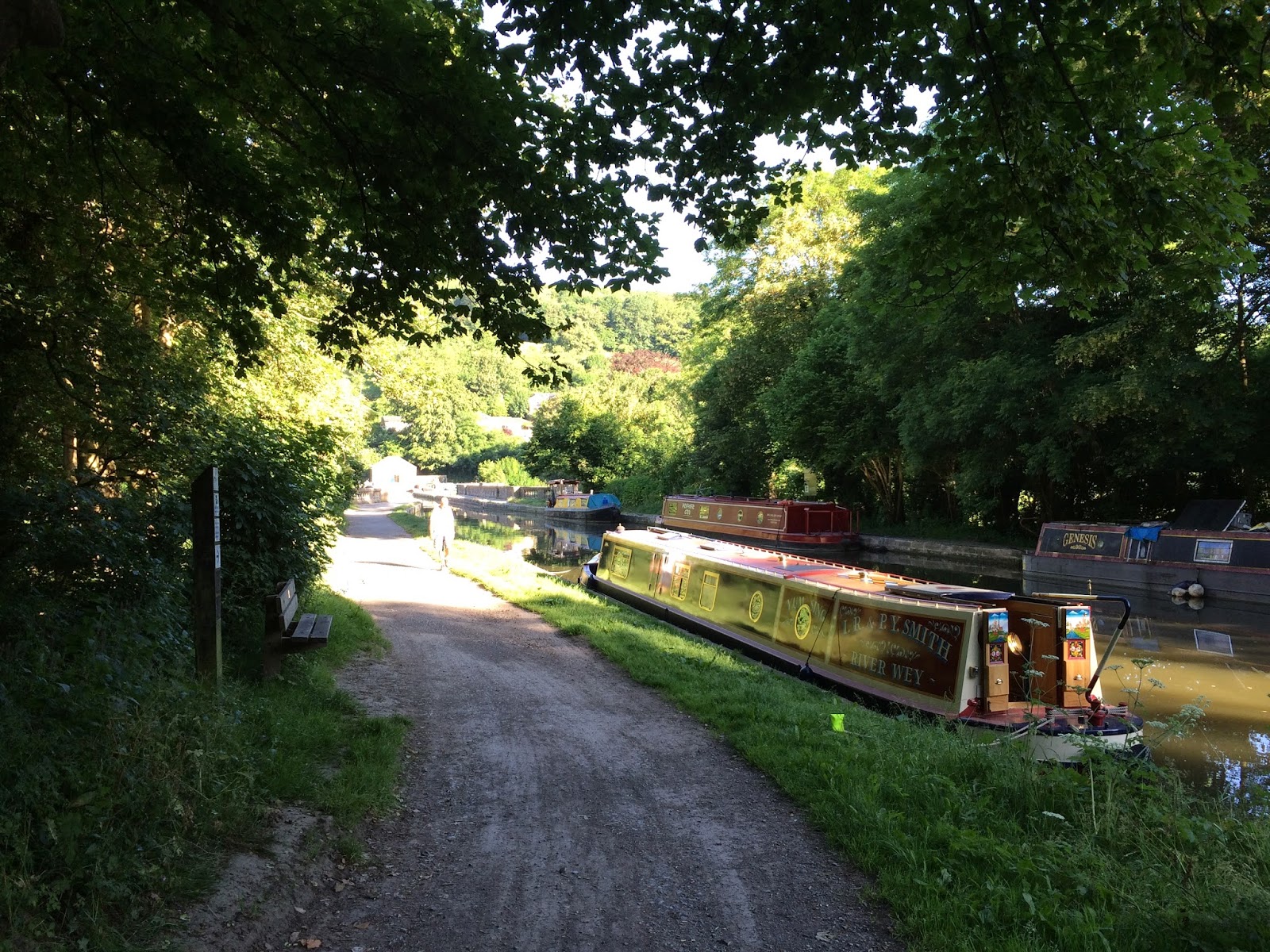 This bridge bears the mark of towlines, from the days of horse drawn boats. I wonder if they used wire cables? That's quite some grooving going on there. 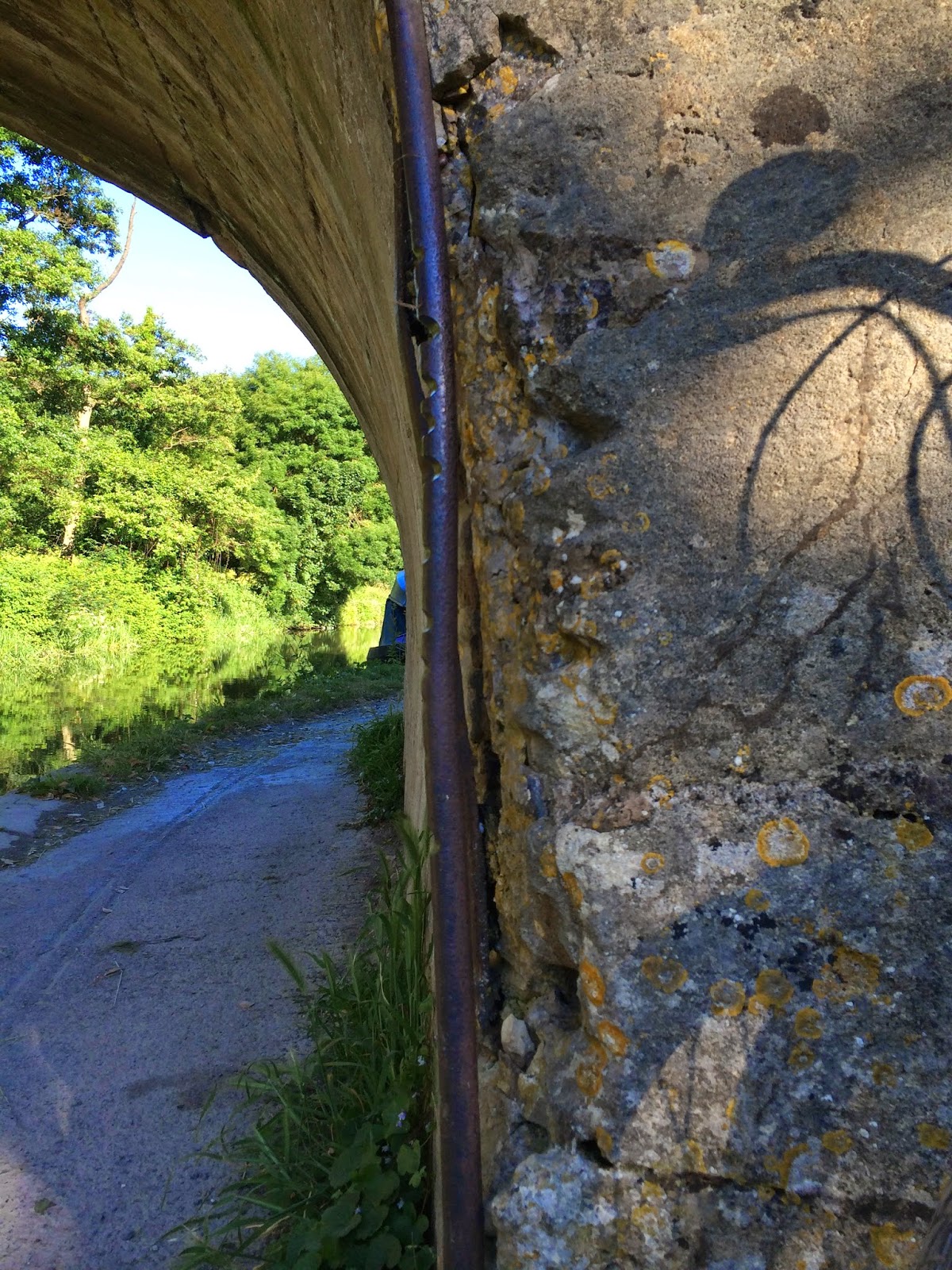 You approach Bath by some very posh architecture. This building that stands over the canal tunnel was once the home of the canal company. John Nash painted a picture of it, and I should jolly well think so too 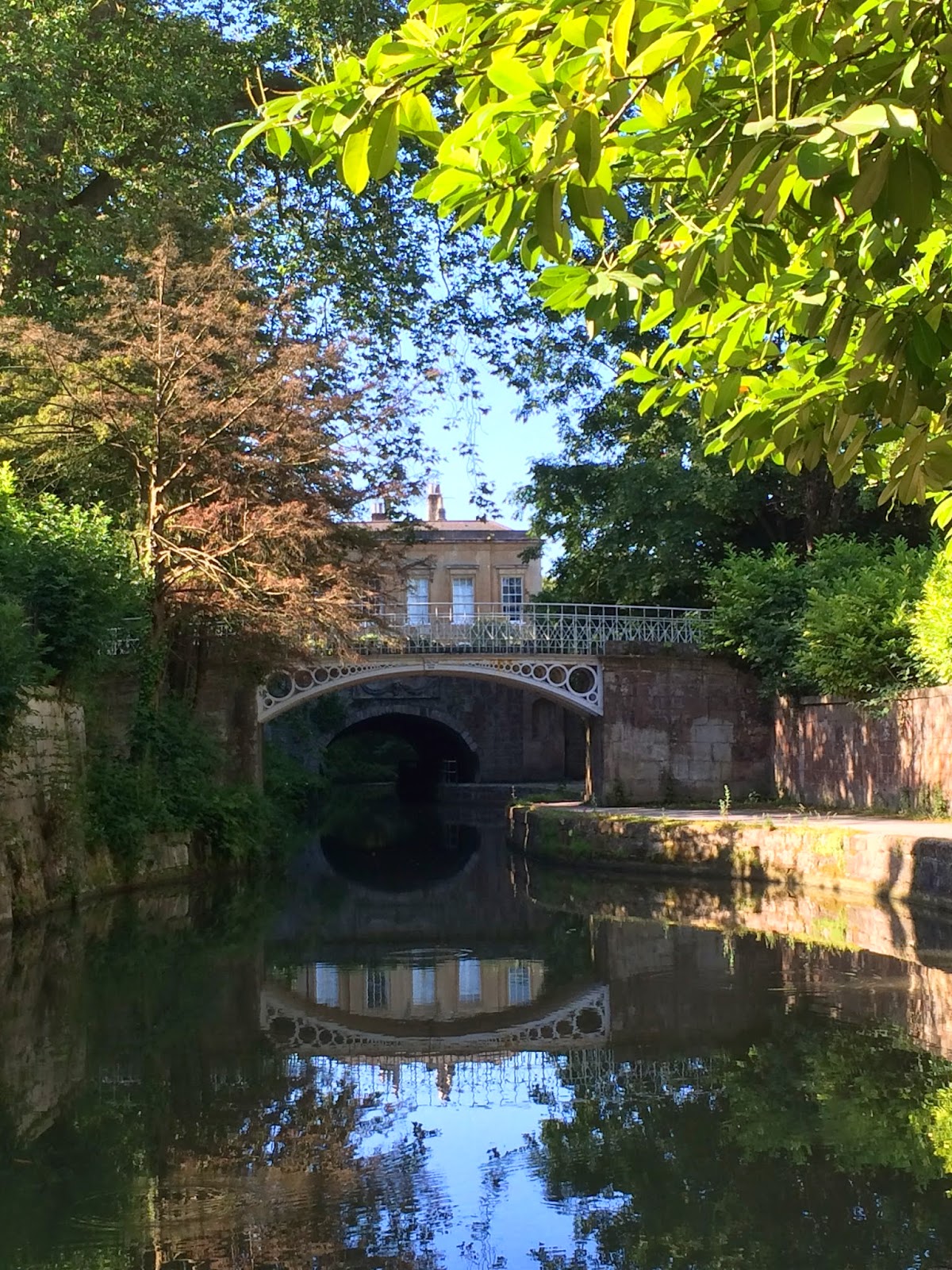 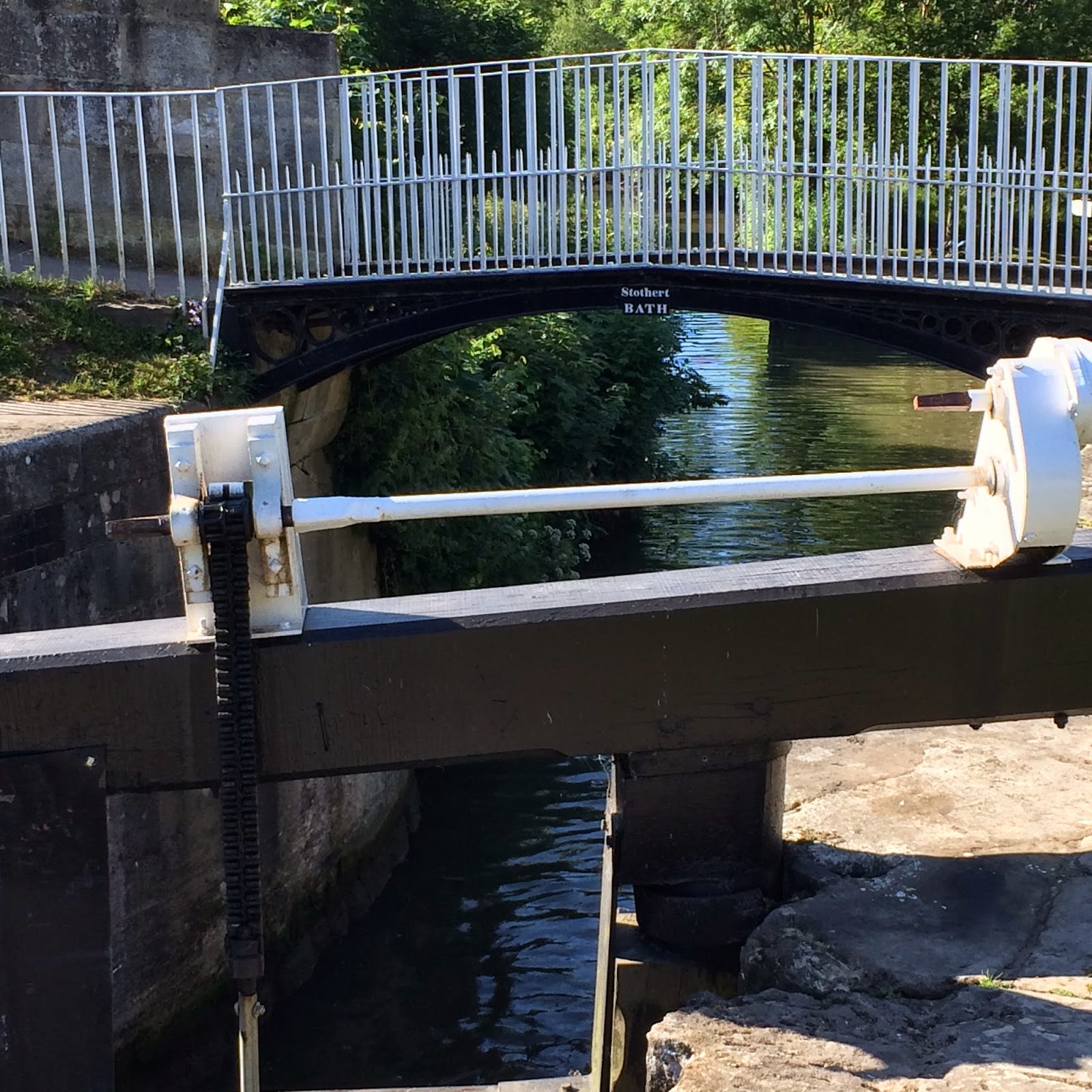 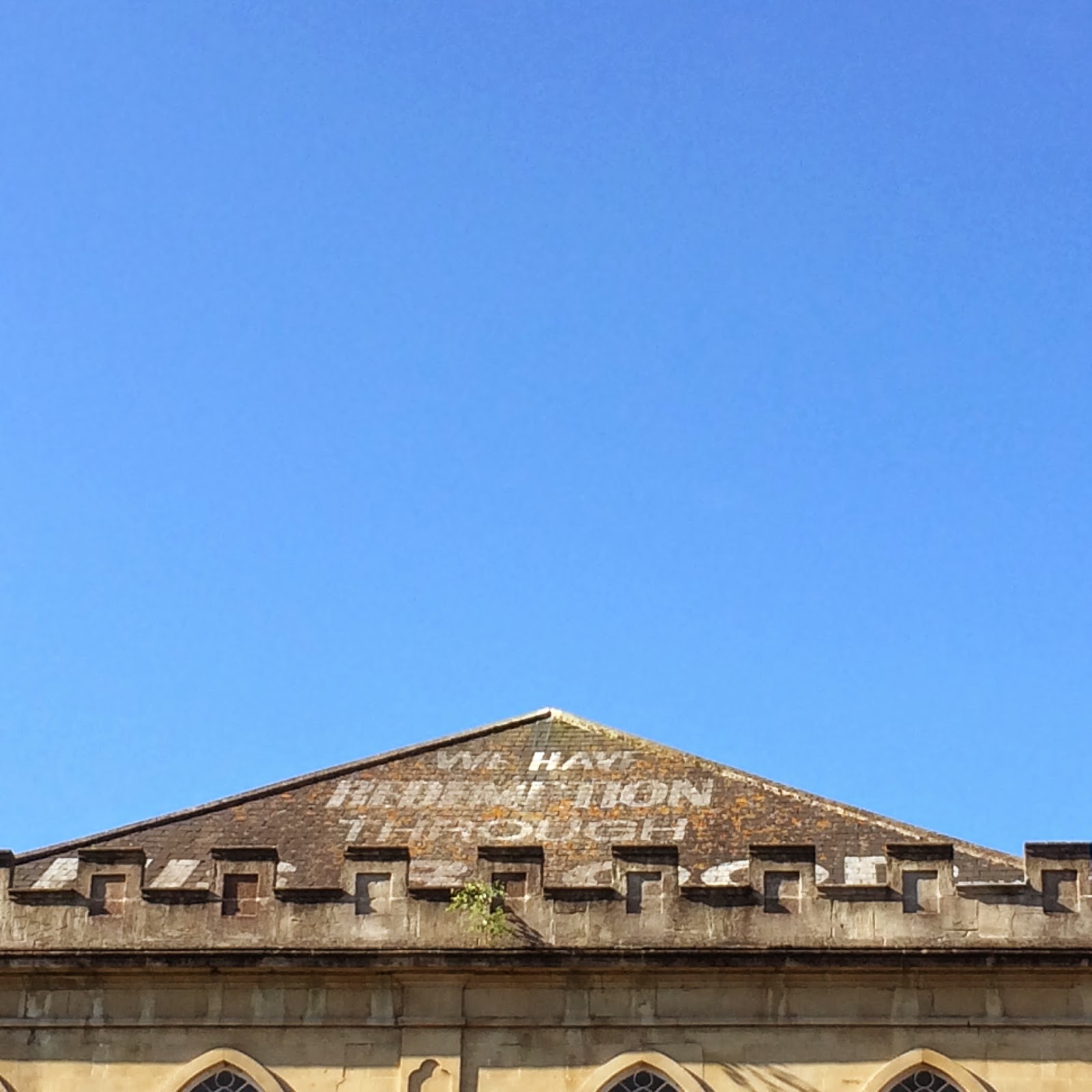 I passed by the offer of redemption, to the confluence of the canal and the river Avon, where some jolly crusts were continuing last night's drunken party. But I didn't take a picture of them. 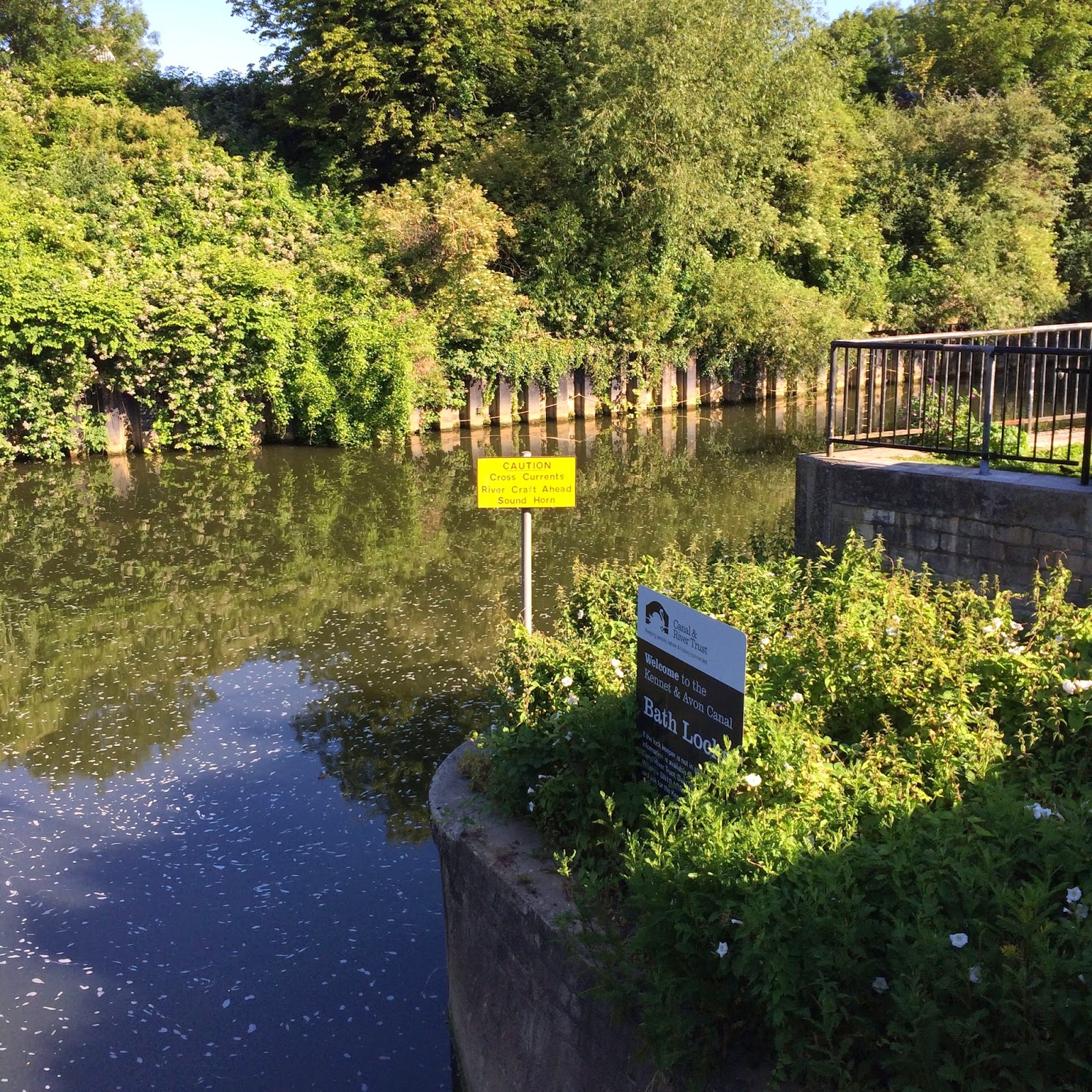 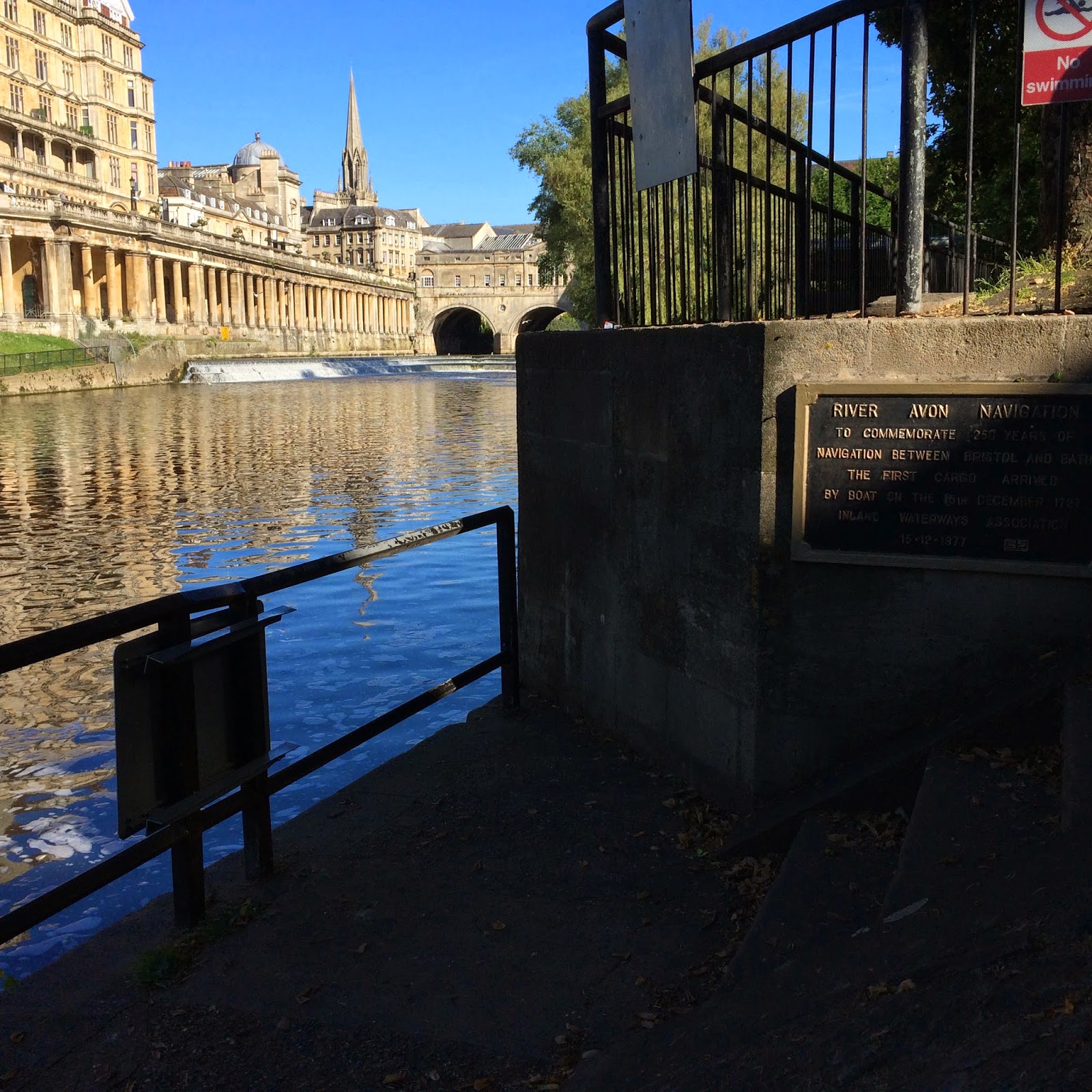 By now it was breakfast time, and Bath Market has what I needed right then 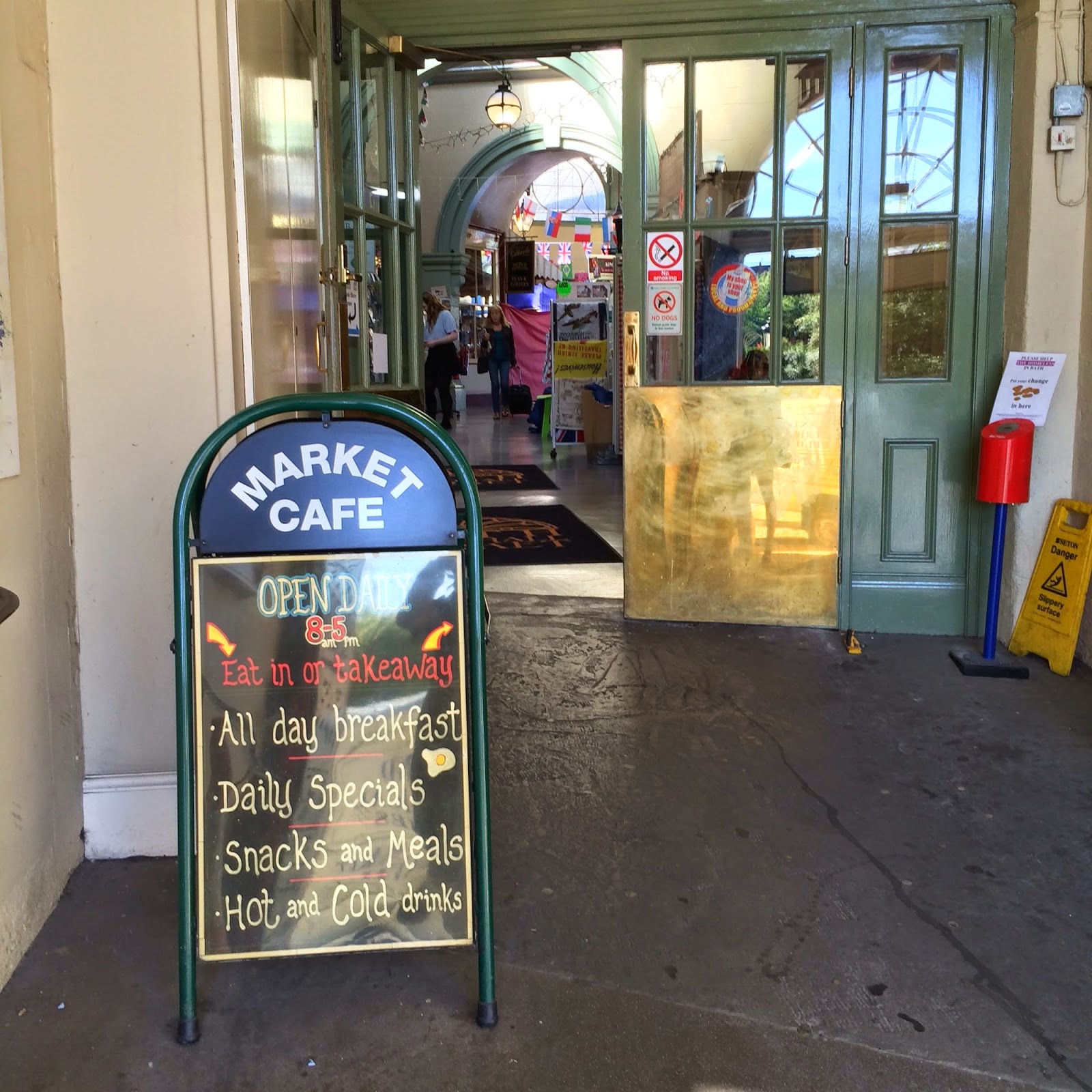 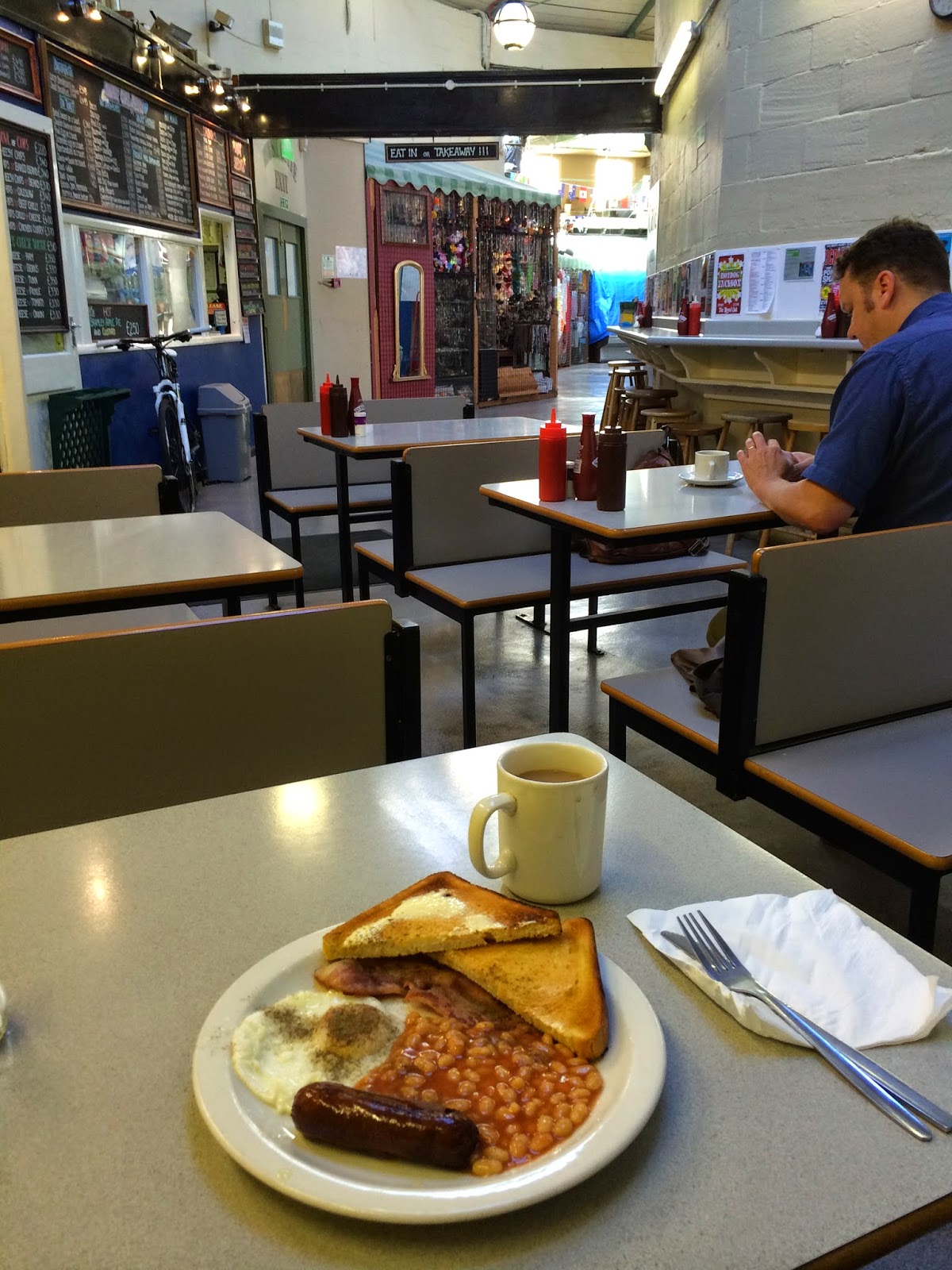 At Bitton, my saddle started getting very wobbly, and then the bolt that holds it in place snapped. I guess it was the rattling and bouncing along the towpath that did it.
....and there were still several miles to go! Fortunately, it was mostly downhill from here, so I sat on the rear pannier rack and made slow progress, sternly ignored by the whizzened gnomes in lycra who zipped past, looking a little like pickled walnuts in Speedos would probably look if they were riding bicycles. I guess I just didn't look serious enough. 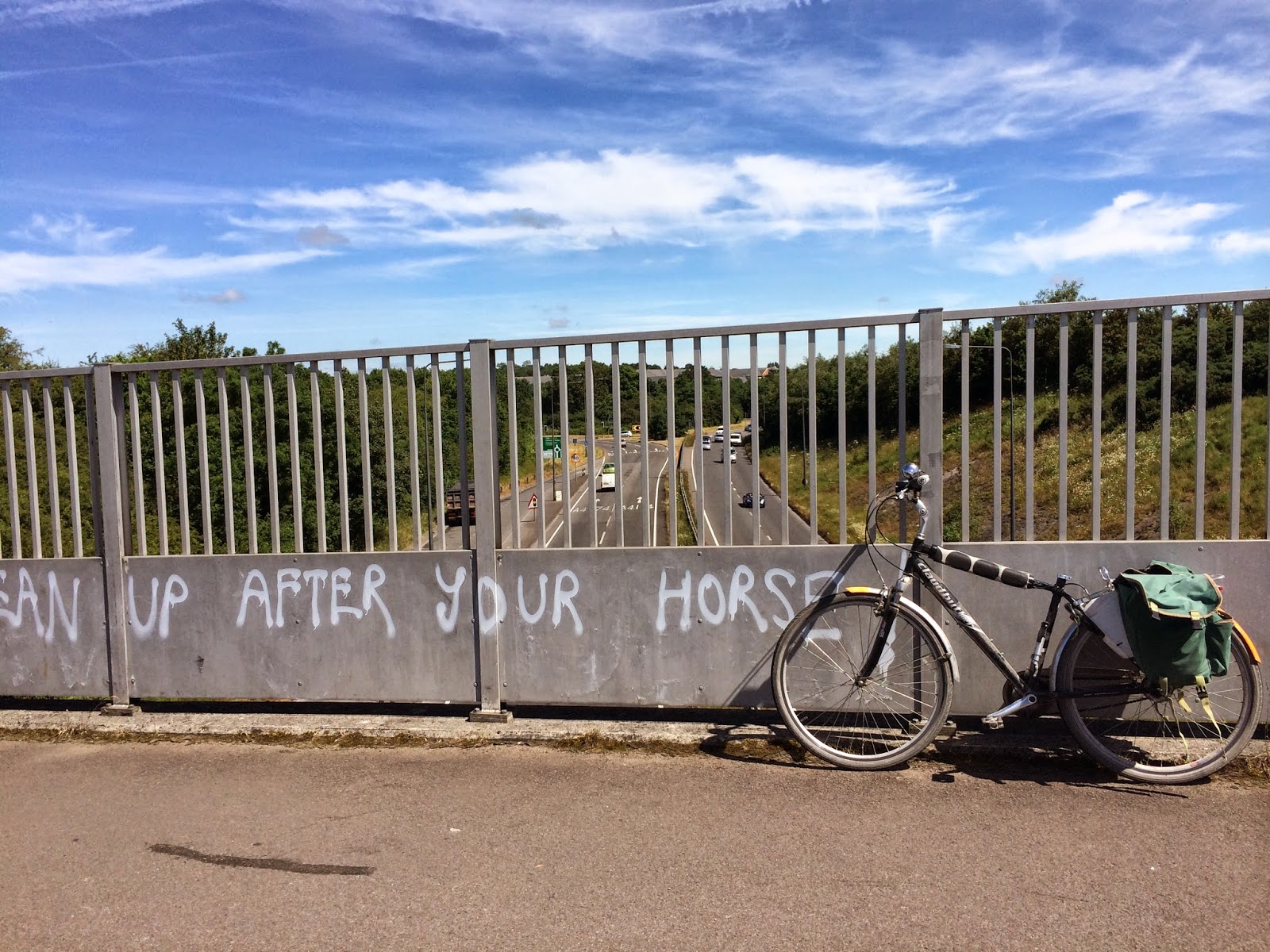 Very near the end of the cycle path in Bristol is a Very Useful Shop that sells nuts and bolts. So I was able to get what I needed.... 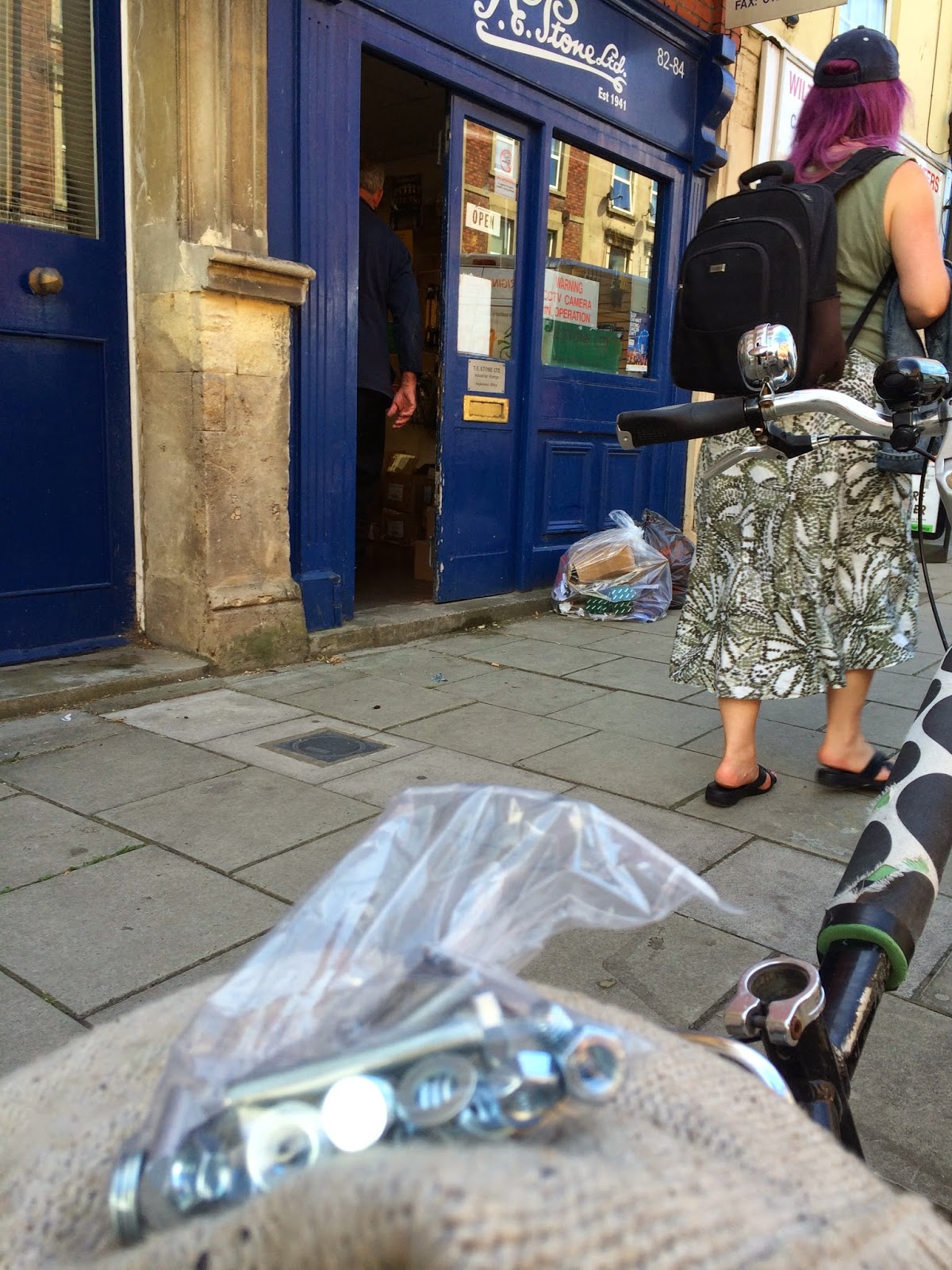 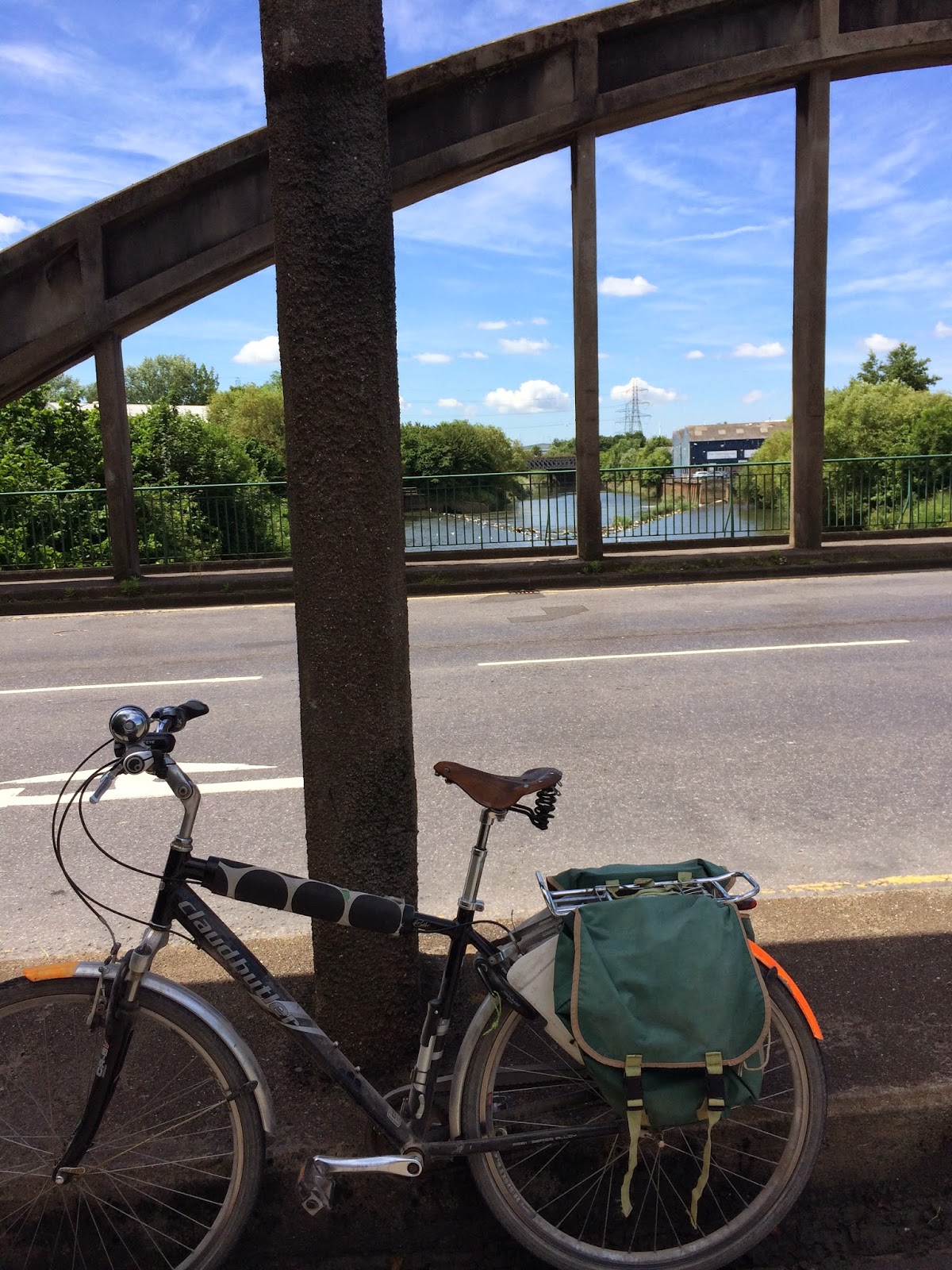 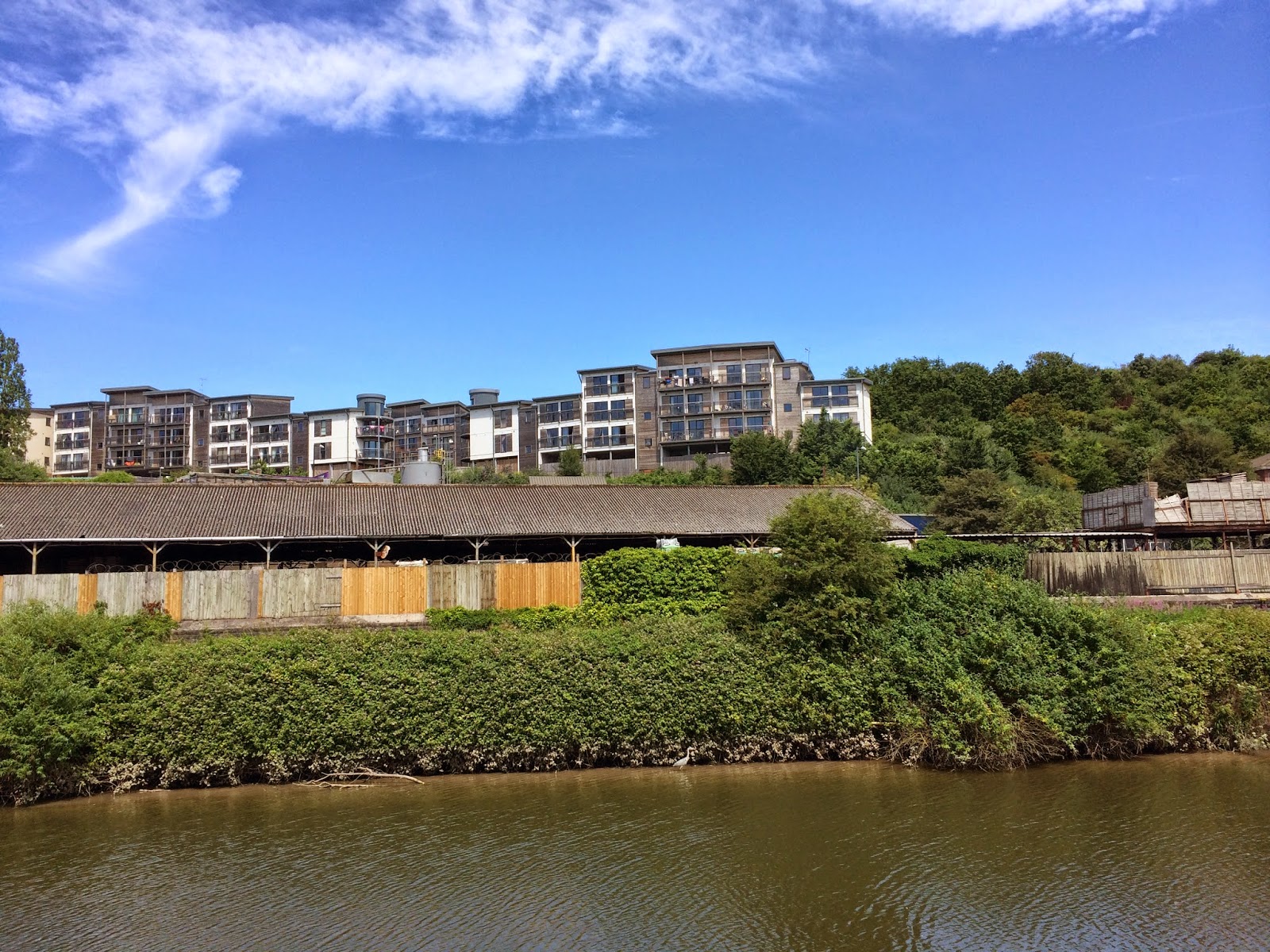 ...by the time I got to  Charlie Ware's Morris Centre, the day was about as hot as it was going to get. How hot was that, you ask? Very Hot Indeed. 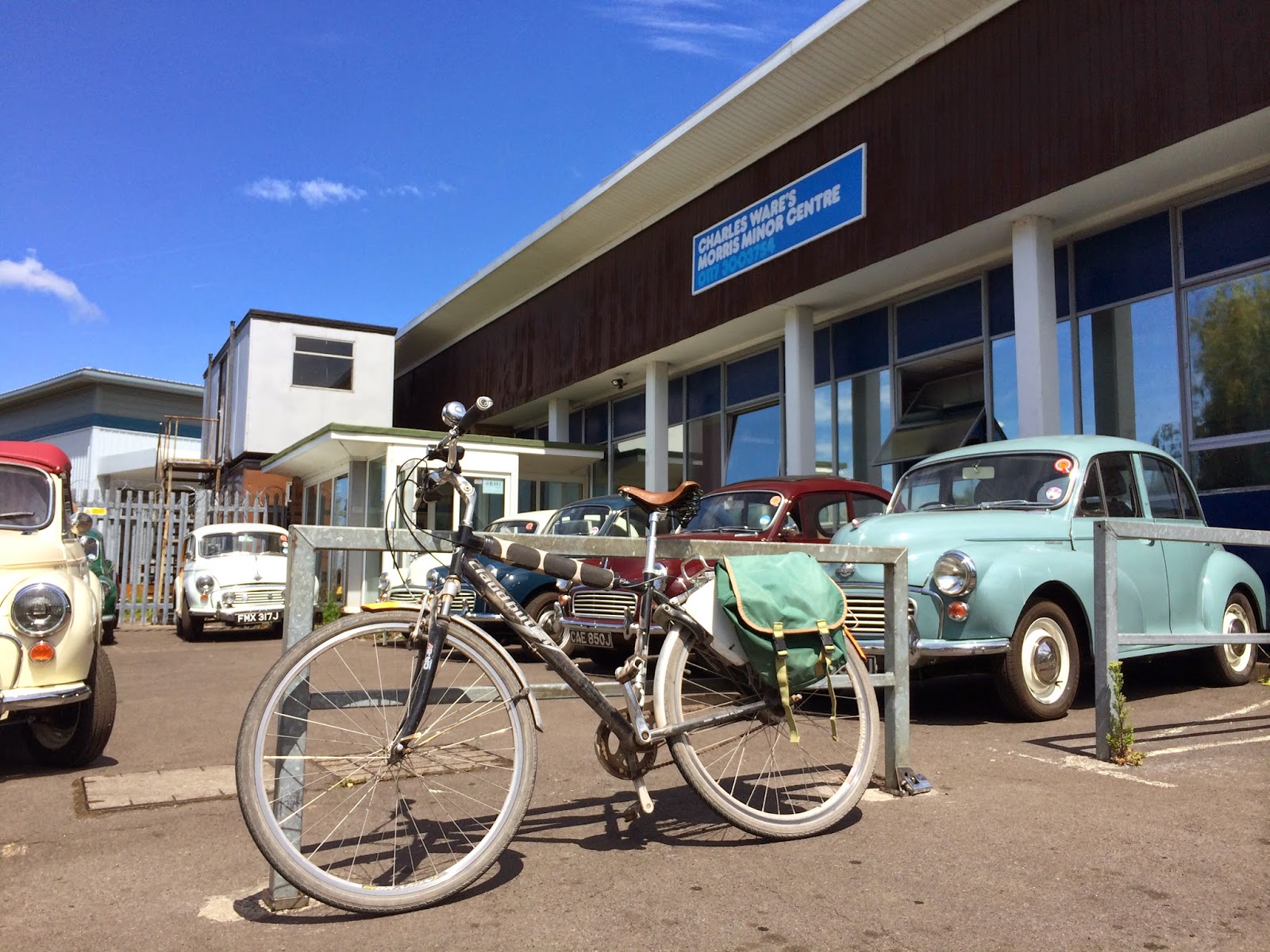 But John had the bits I needed! 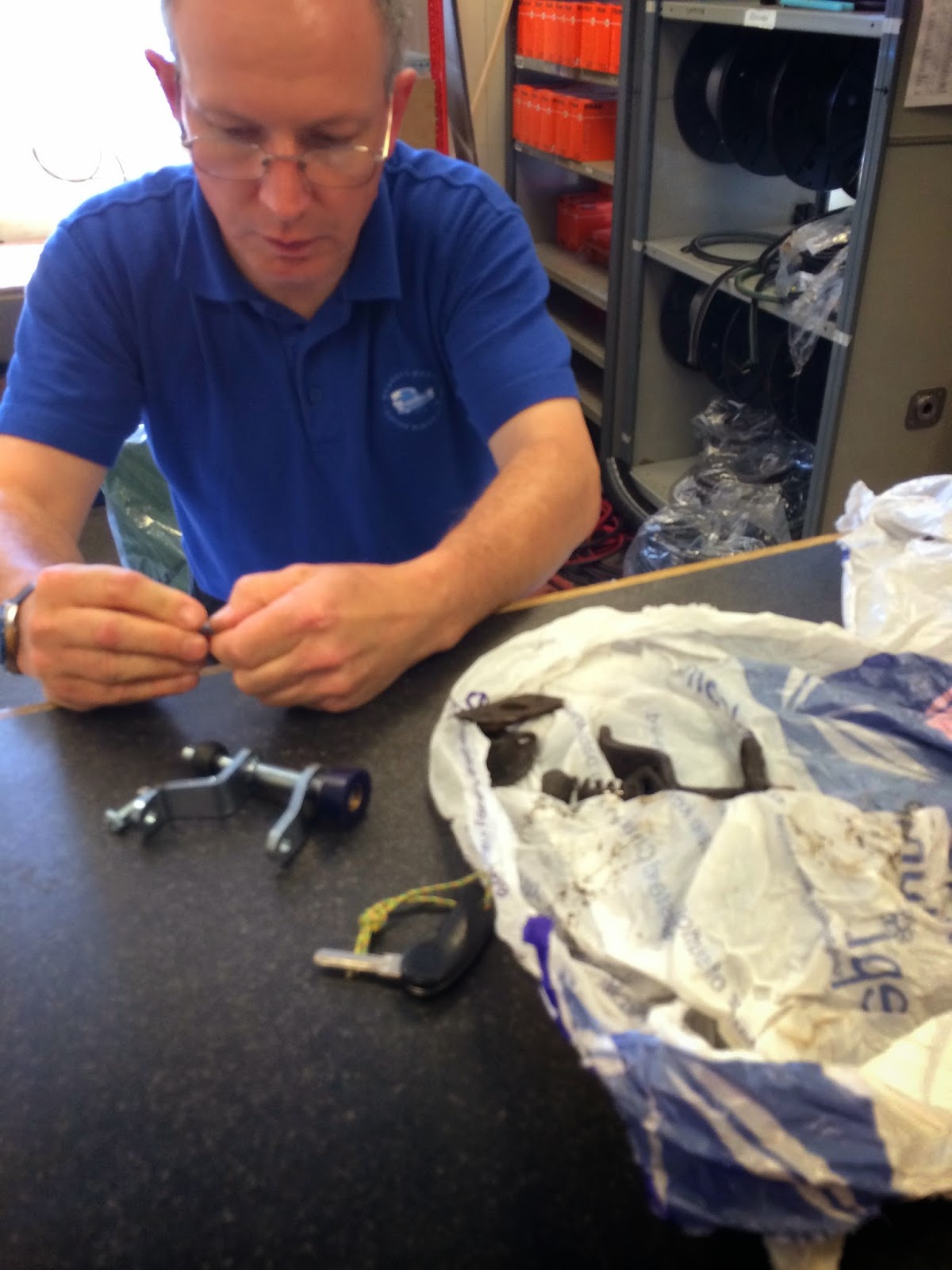 I cycled back down to Bristol Temple Meads and hopped on a train to Bradford on Avon. Quite frankly, I had had quite enough cycling for the moment.

....but there was still a little way to go from BonA 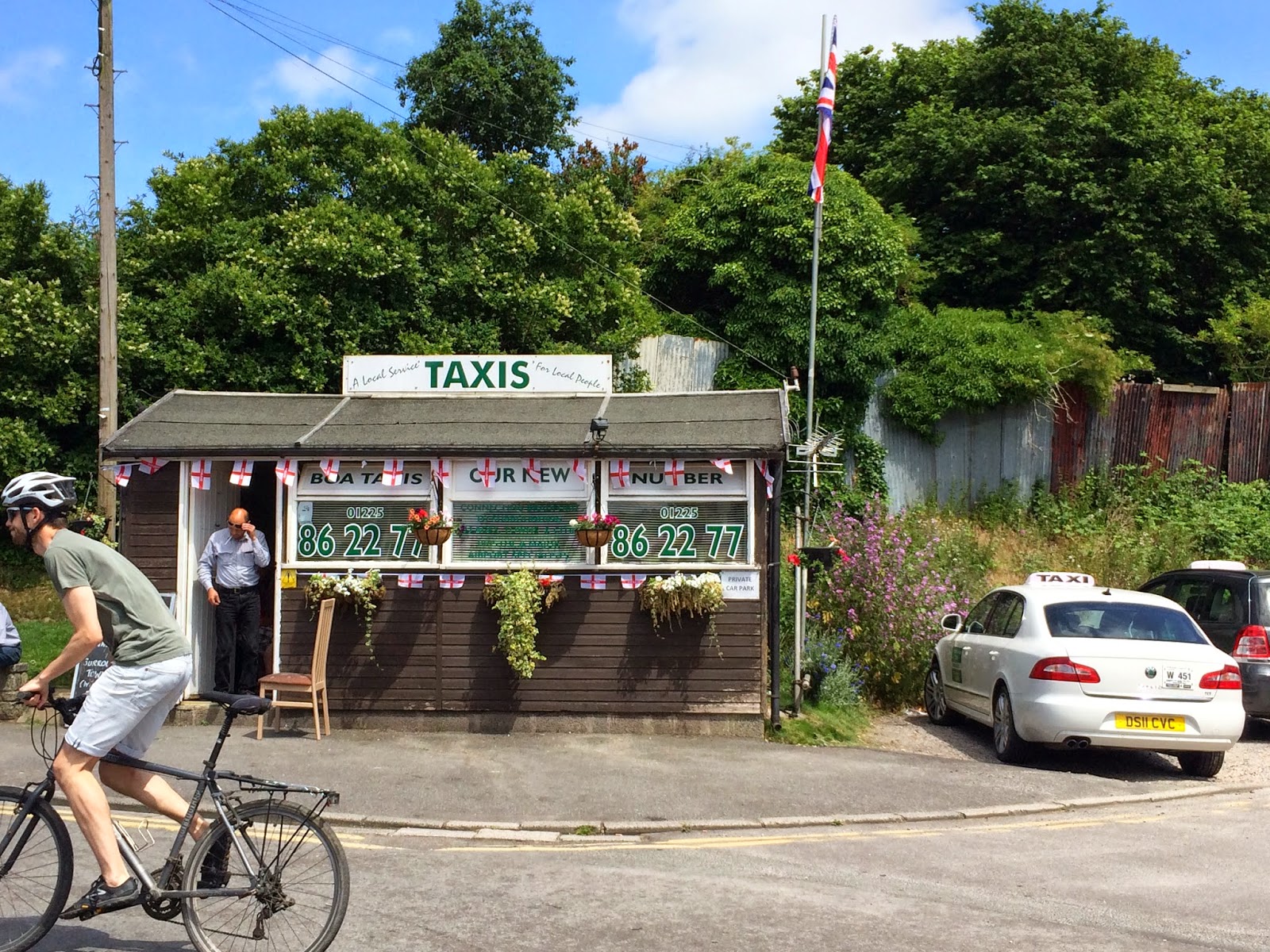 ...and I had a day off before tackling the clutch

...but that is another story. 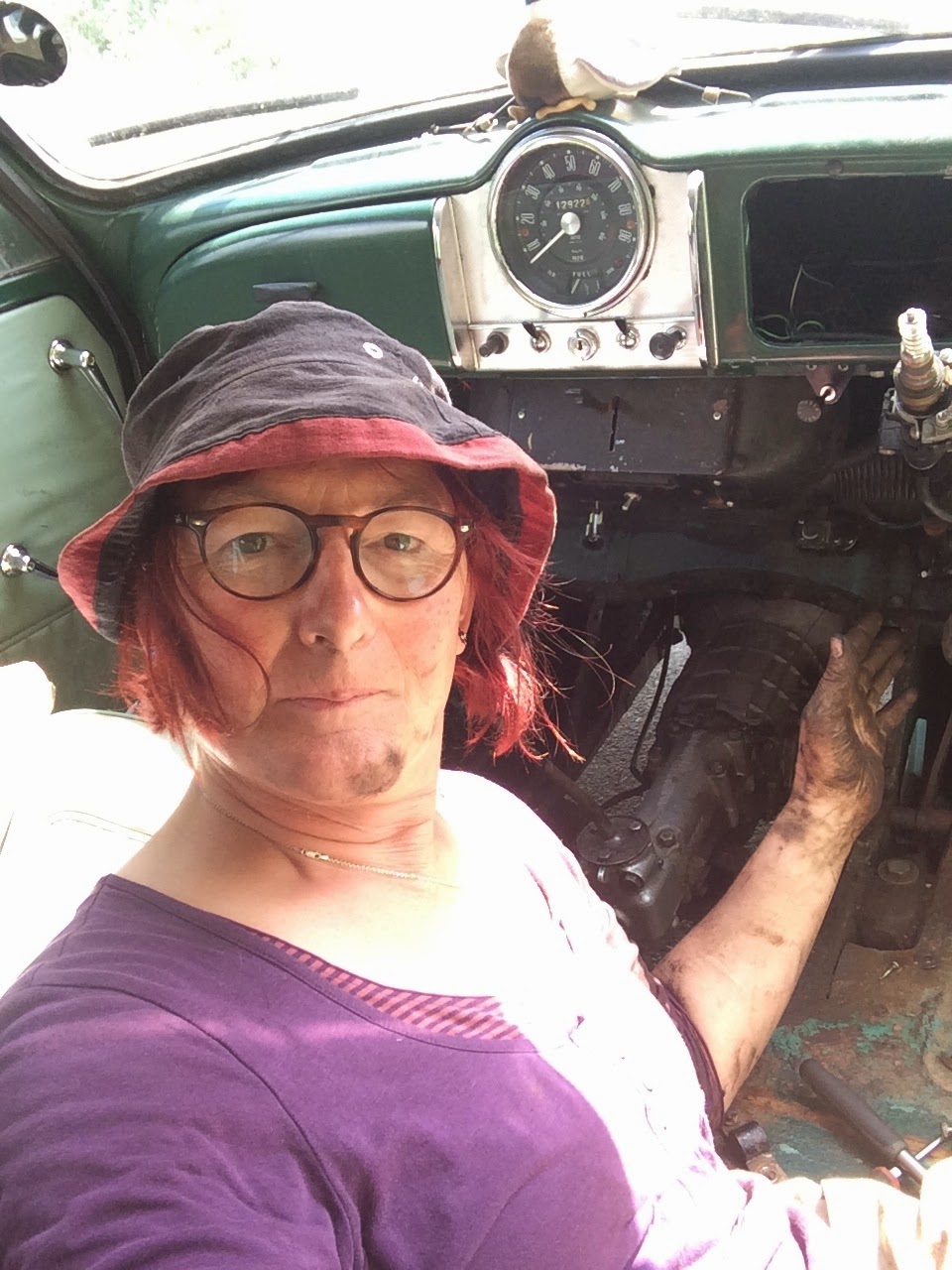 the blue meteor of Bradford on Avon

Where I was moored near Semington in Wiltshire, whitethroats called all along the towpath, occasionally making short song flights before dropping to a new perch. Their call is slightly sneezy, and reminds me a little of the more laid-back yellowhammer song that's started to be heard; both of them well suited to the hot, languid afternoons we've had over the last week.

I came over to Bradford on Avon a couple of days ago, and am moored near the tithe barn in a long avenue of tall trees where the blackcaps sing. There are lots of kingfishers on the river here, or perhaps one very busy kingfisher. This morning I took an early walk and watched one fly along, dumpy and purposeful, and burst into a sunbeam like a blue meteor hitting the earth's atmosphere.

A short time later I saw the kingfisher again, hovering briefly over the water. I never knew they did that.

The splashing under the trees below the packhorse bridge proved to be not a giant otter, but a labrador  called Walpole.

I'm guessing at its name.

Here's Peter, of NB Grey Hare. I last met him in Reading last year, when Suzanne and I were setting off up the alarmingly flooded Kennet in Suzanne's boat Electra. Peter's been at Hilperton over the winter, working on his engine.
Posted by Dru Marland at 10:18 No comments:

on the art trail in Easton


To Bristol on Friday for the Easton Arts Trail. As I entered the city, something gave in the Trav's clutch linkage, and the gear changes became horribly crunchy. I pulled over ASAP, and crawled underneath and tightened up the adjuster as much as I could, and crunched my way around Bristol.

I was exhibiting in Hazel Hammond's house, along with Deborah Harvey, whose fused glass was on display, and Hazel's own very powerful installation centred around kintsugi cups....

We were very busy indeed; there were about 270 visitors over the two days. For me it was especially interesting because it was the first time I've exhibited in a context where people have come specifically to see artwork, rather than it being in the background of a place where you go to do something else, like a cafe... the conversations and comments I had were very helpful and encouraging.

With a quick bodge of the clutch, I headed back to the boat on Sunday evening, choosing a route that involved the least junctions and traffic lights; I reckon I changed gear fewer than 30 times between Bristol and Semington, near Melksham, where Eve is moored....

This is a quick post cos I feel like I need a week's sleep. Strewth. Hopefully sometime soon I'll write properly to express my thanks to Hazel, Deborah, Mal, Andi and Katie the Boat Teenager.

message from the cut 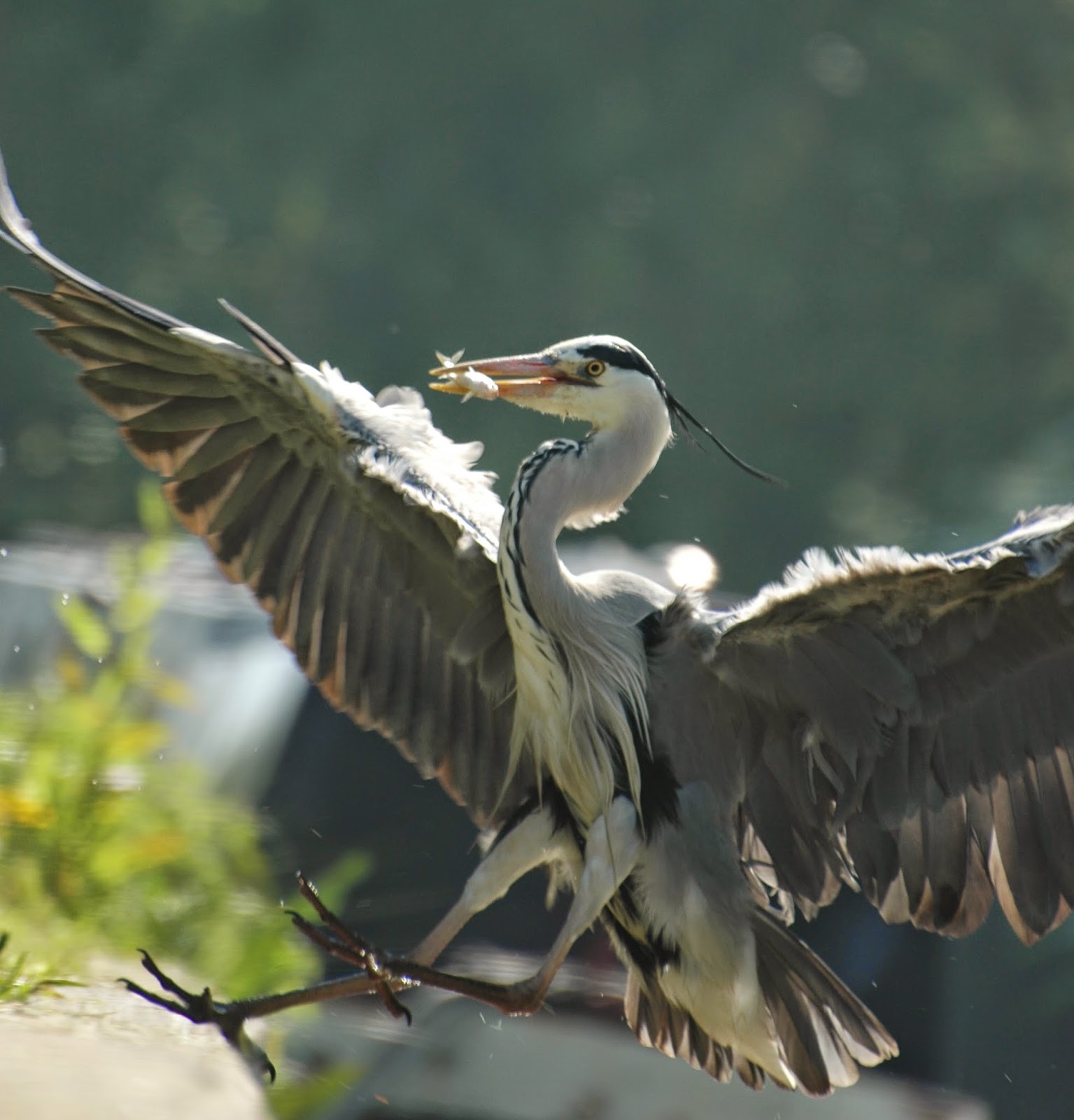 It's two months now since I moved on board narrowboat Eve, and I'm finally at the point where I can start posting to the blog again. This involves finding electricity, either in 12V form (from the boat's batteries, which are charged from the engine) or 240V (from a little portable generator); and internet, which either comes via my iPhone or my friendly local library (the latter of which is where I am presently situated, and very nice it is too).

I've seen, and taken pictures of, lots of wildlife, and mets lots of nice people. I'll write more about that, before too very long... and I've been busy exhibiting my pictures at the Better Food Company in Bristol, and, next weekend, I'll be on the Easton Art Trail, thanks to Hazel Hammond, whose house is venue no. 3 on the trail, and who will be exhibiting too, as will Deborah Harvey.

And tomorrow I'll be reading some poems at the Bath Festival of Nature. Goodness! 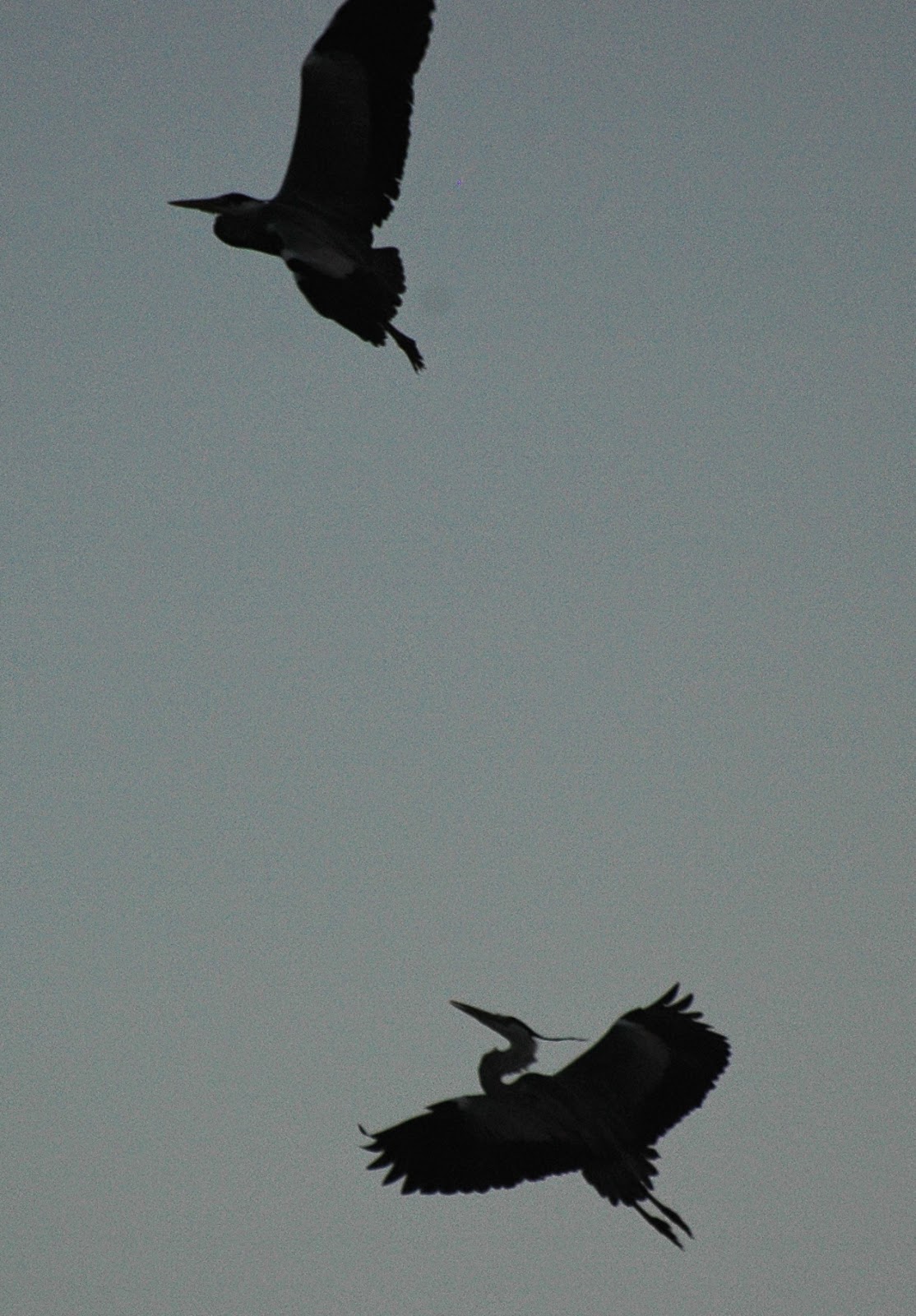