the big game of cycling 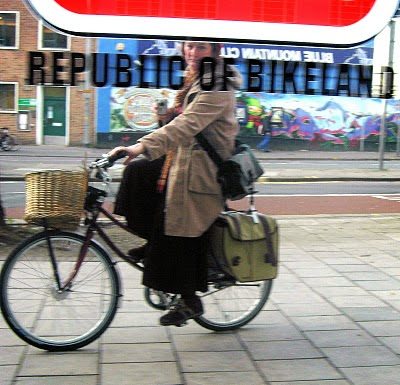 Others, I am not the first,
Have willed more mischief than they durst...
Here in Cycling City, we get the occasional 'robust debate' about bicycles and cars, chiefly on the Bristol Evening Post website, a habitat that has proved congenial to all sorts of pond dwelling creatures; here, for instance, is a look at a 'discussion' that went on last year about cyclists.

A recent newcomer to this discussion was Kayla Maratty, over at the Bristol 24-7 website. In a piece entitled 'My homicidal tendencies towards cyclists aside, the tuition fees fight goes on’, she says

"Part of me would take great pleasure in mowing them down when they choose to cycle in the middle of the road or are determined to peddle all the wayup Black Boy Hill. But obviously I would never do that; I can get by just on the thought of it to restrain my road rage."

It is refreshing to see a bit of honesty about how some drivers feel about cyclists. I weighed in with some encouragement:

I find that revving the engine aggressively and then passing them so close that you ping them with your wing mirror is rather fun, and helps you feel better about yourself.
They'll probably pass *you*, two minutes later, when you get stuck in another static queue of traffic , but hey, live for the moment, I say!

(sadly, my comment was deleted. It's per-litickle kreckness gone mad I tells you)

Kayla's article was removed not long after, at her request, because she found the responses upsetting. The editor characterised the behaviour of the commentators as 'bullying'. You will be unable to make up your own mind about that, of course.

Well, it did get me thinking. And what I thought was, let's have a look at cyclist-hunting as a blood sport. Because, deep down, you know we all have a violent self that revels in meting out destruction and pain.

And the more I look, the more sense it makes. I mean, you can't hunt foxes with hounds anymore. It's far too expensive. Oh, and against the law. Sort of.

Shooting? If you want to go bagging pheasants, say, it would cost you about £30 or so per bird, and you would expect to pay £400 upwards for a day's shooting.

Stag hunting is even worse. You'd reckon to pay around £150 for a day's shooting, but, when you pay extra for every point on the stag's antler's, it'll cost a lot more; the lucky chap who shot the Emperor of Exmoor would expect to have paid £1600, but you could be charged up to £10,000.

If you decide to go freelance, as it were, and go out hunting while the gamekeepers lie a-sleeping, then it could be a lot cheaper. But if you got caught, then it would probably cost you about £2,500 per deer, with the chance of three months imprisonment per deer killed thrown in for good measure.

Let's face it, the wise money goes elsewhere. Cyclists are plentiful and easily bagged. And, like deer, they're big enough and usually intelligent enough to show anger, fear and other such emotions when they realise that they're about to be bagged. Which adds to the sport.

And how much does it cost? Well, if you knock one off and injure them, you might expect to pay, say, £10 for a quick respray of the scratched bit of the car. Though if you choose to stop and talk to the cyclist, then you may even end up getting them to pay for the damage, though you can't rely on it; chances are the cyclist won't be insured. The police tend to be sympathetic. Just remember the mantra: "Sorry, mate, I didn't see you". Works like a charm.

If you manage to kill them, then the worst case scenario is that you may find yourself charged with 'causing death by dangerous driving'. There is an outside chance that you will even be convicted, though with mitigating factors thrown in, and obviously with the cyclist being unable to put their side of the case, you may end up with a bit of community service.

I was looking for this recording online, and had some difficulty finding it. So when I did, I recorded it, and here it is.

Recorded on the night of 19 May 1942, when BBC engineers visited a wood in Surrey to record nightingales singing. The microphones also picked up the approach of the Bomber Command force heading for Mannheim, a raid by 197 aircraft including Wellingtons, Stirlings, Halifaxes, Hampdens, Lancasters and Manchesters, of which 11 failed to return

dropping off the radar

Funny thing; last time I wrote about Wavid Dalliams and Latt Mucas (to Spoonerise the chaps in question) the post in question became mysteriously invisible to Google. And a similar thing happened today, when I wrote this; earlier today, it was very near the top of the first Google page if you entered a few key words; now it is nowhere to be seen unless you enter some very specific terms.

Just saying. If you fancy linking to the post in question to see if it will become more visible, then who am I to say no? I'm not entirely sure I know what's going on here, but it seems odd that a voice from within the 'trans community' should be nobbled when it is critical of a self-appointed spokesperson for that community....