I never really thought of myself as a cycling activist, mostly because I'm not a cycling activist. On the other hand, the simple act of cycling is apt to radicalise the most moderate of people, as it puts you on the receiving end of some pretty stupid and/or aggressive behaviour from drivers. And, of course, some folk seem to find the mere existence of cycling offensive, perhaps because it doesn't buy into the whole package of values and assumptions that go with car kultur ...

Be that as it may... the comments section on any newspaper website is the natural habitat for any amount of rich and strange pondlife, but I was compelled to put my wellies on and wade in last week over on the Bristol Evening Post's internet site. The Evening Post seems to have decided that a pro-car, anti-bike stance is where it ought to be, and so its stories tend to follow that bias. Hence last week's Your (sic) dangerous, rude and need educating, Bristol cyclists told, followed by a piece by Mike Ford, Even blind people can see how badly cyclists behave.

It all starts here:

Blind and partially sighted residents have called for the safety of pedestrians to be given high priority as the city plans to spend millions on projects as part of the Cycling City initiative.

They have told their MPs that near-misses have left many not confident about going out and they fear the city's status as the country's first cycling hub will only add to the problems.

..and by the time it gets into Mike Ford's hands, it has become this:

It's not my style to make or condone sweeping, generalising statements like this; but when even blind people can see how badly cyclists behave, surely it's time for cyclists to hold their hands up and admit maybe they need to change their attitudes?

Now, personally speaking, I get really annoyed by people who cycle on pavements too. But then, I have about as much in common with them as I have with the spoddy young man with the spiky gelled hair who rorted past me in his car, dangerously fast, and with that farty noise that tells you that he's spent loadsa money on an exhaust pipe that sounds aggressive, over in Clifton the other day. I have no particular desire to change my attitude to either; they're all idiots.

Maybe I should take direct action against them? I did step in once to prevent a couple of drongos from stealing something off a bike outside the University. It was definitely a high-adrenaline activity, and not one of the many people who passed us during this confrontation stopped to offer help. Still, as a goodwill gesture, I promise to stop and Have A Word with the next pavement cyclist I meet, if Bedminster Bigmouth will undertake do the same with antisocial drivers, whether they be the ones who park dangerously outside schools or on pavements, run red lights, or do any of the many things that drivers do and shouldn't; though obviously he might have a problem catching them, in which case he could always ask for some help from that mighty defender of motorists' freedom, the Association of British Drivers, which is apparently one bloke with a Fiat Panda. I think we could respect such a public-spirited gesture from these vociferous fellows putting their money where their big mouths are...

Here's a small taster of the quality of debate... 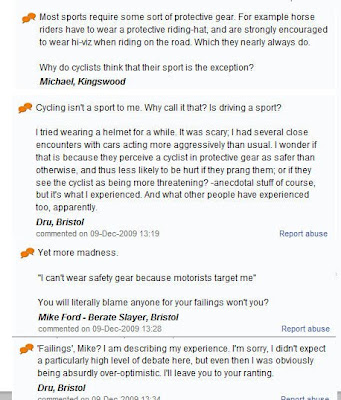 ..and then there was this 'contribution' from Owen... 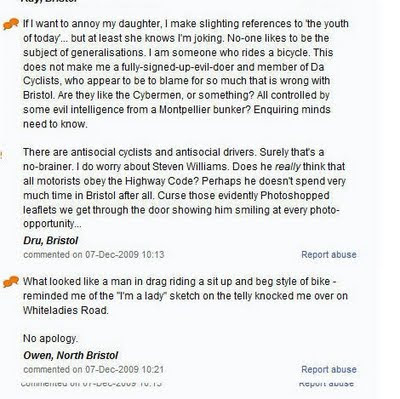 ..."Very odd," I thought, coming as it did directly after my post. And then, shortly after, this...

Note the clever use of brackets there. "(S)he". By the way, if you were in any doubt, the incident described by Owen on Whiteladies Road was presumably a made-up story so that he could introduce the Little Britain reference.

Some people are transsexual. Get over it.