It was a chilly day yesterday, and gloomy and damp. But then I heard a familiar and long-awaited sound. Was I mistaken? I watched out of the window, and soon they reappeared; a formation of four swifts, sweeping round for another low pass, like a flight of fighters back from a successful sortie.

This is what my road looks like on foggy mornings at half past three. I love travelling at this time of day; as I cycled to the station, foxes gambolled away ahead of me, clubbers staggered towards somewhere to crash, and Queens Square was full of blackbird song.

The station was locked. I sat near two cheerful young men talking about climbing. One ascended the station wall, to keep his hand in or illustrate a point. I wondered about the big suitcase next to me. "This is yours, I guess?" I asked. "Oh no, it's his over there". He pointed to a figure far across the car park, with hood up and scarf over his face. I kept an eye on him, just in case, and tried not to worry about the case. Even an inept terrorist would scarcely think me alone worth blowing up.

The airport express coach came in, full of passengers, most of whom were dark-skinned. The sign on the back of the bus said "The Quickest Way To Africa". Sounds a bit optimistic, I thought to myself. I worried that they might all queue for the self service tickets, and make me miss my train. But the bus picked up a single passenger and departed. Then the station doors were unlocked and I was first at the ticket machine.

This was train travel as I remembered it. One big empty train. I found a seat at a table, facing forwards. Perfect. At one second past 04:47 (I was watching the departure board through the window) we started moving. And I was facing backwards. Damn, caught out by Temple Meads again.

A gloomy army trudged onto the train at Reading, Costa coffee in one hand and iPhone in the other.

There was the Thames that I'd sailed down only a fortnight ago, still looking rather high; and the sun rising over it.

Before long I was walking across Hyde Park; I had quite a lot of time before I was due at Westminster. The early swimmers were jumping into the Serpentine, joggers were cajoling their dogs along, and those who enjoy riding on horseback were riding on horseback.

It was a good morning for sharing the felicity of being out and doing, early on a beautiful spring day.
...though by the time I got to South Kensington my legs were beginning to protest, and there ahead of me was a rack of Boris Bikes. It was about time I saw how easy to use these are. So I stuck my bank card in and kept hitting the screen, and before too very long I was anxiously tugging at a bike while the green light came on, hoping it would escape from the frame before the light went out.

It did. And I was away! Off round Kensington and Chelsea, and down to the river. Eventually, at Westminster, I looked for somewhere to park up. This would be important as I didn't want to be stuck with an untethered bike when it was time to go into the Houses of Parliament. Oh no! There was a long row of Boris Bikes, and no spare slots. I searched further and further afield, then gave up and abandoned the bike on the South Bank and went beachcombing, as the tide was out.

Here is a fragment of a wine jar that Claudius brought over in the year 43AD. Next to it, that thing that looks like a dog turd is in fact a heavy iron nail, melted where it was subjected to the ferocious heat of the Great Fire of London.

And this is the actual frying pan that Emmeline Pankhurst clouted Herbert Asquith with in 1908, after he told her to make him a sammitch.

History is all around you in London, you know.

Just before noon. I met up with the folk from Trans Media Watch, and we went into Portcullis House, where the security chap spent ages emptying my bag to see what made the metal detector go ping. So many things to choose from...

We gave a presentation about our experiences of press intrusion. This event was sparked by the recent death of Lucy Meadows, a trans* teacher who was hounded by the press and subjected to the sort of crap from Richard Littlejohn in the Daily Mail that we have come to expect, but not accept, from him and the paper that pays him.

I think it was a useful event. I was glad to see my own MP, Stephen Williams, there. And Caroline Lucas. And Kerry McCarthy, another Bristolian MP (and several others whose names I shall add just as soon as I find out! Sorry!) Thank you, all!

After all that, it was time to slope off to the Tate, and say hello to some old friends. I was extremely cheered to find that Keith Arnott had been given a room to himself. His Self Burial was one of the most memorable pictures I recalled from my very first visit to the Tate, back in the days when people were getting outraged about the expensive bricks. (I thought the bricks were a bit ho hum, but really enjoyed Richard Long's maps (not visible on this latest visit).

I hadn't realised that Keith Arnott lived just around the corner! -the background of lots of his pics looked very familiar, and were indeed Chepstow and the Wye Valley. I liked his gardeners very much.

By the time I dropped off my last Boris Bike in Hyde Park, my legs were aching like heck. The bikes are terrifically useful, but so heavy! -like pedalling a tank. And finding somewhere to leave them, if you're an out-of-townie, can be a bother.

So I sat by Paddington Basin and ate Marks and Spencers sandwiches, and longed for home and bed, which were a few hours away yet because I'd booked myself on the 8 o'clock train because it was the cheapest.

And it was packed. And the bloke next to me grunted ungraciously when I tried to be sociable, and waved his Marks and Spencers sushi around, wafting the smell at me, and hogged the arm rest and stared at a swords and sorcery story on his laptop. But I was cool with that. I had my Marks and Spencers Somerset cider and I was taking it home. Inside me.

St George and the EDL When St George met the EDL
They gawped and shouted “Bloody hell!
That geezer looks a bit muslamic!”
He drew his sword and, in a panic,
They ran off, shouting “Dragon, aid us!”
The dragon, seeing these Crusaders
For Shit Britain, ate them all for tea
Then went to t'pub with St Georgie. 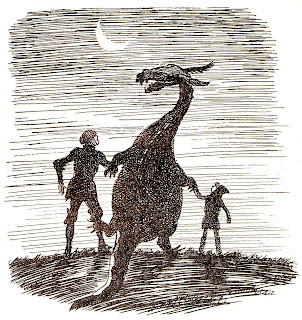 (illustration by Ernest Shepherd from The Reluctant Dragon, by Kenneth Grahame)
Posted by Dru Marland at 16:45 No comments: 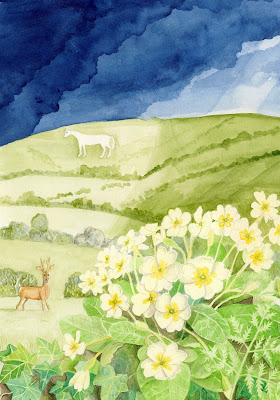 As splash is bracing, so's the daffodil's yellow;
Salt-sharp, and waxy to the touch,
First lighthouse loom, that longed-for landfall after much
Wandering winter oceans.

Later, mellow on the Bristol train, my holdall stuffed
With Coptic crosses from Djibouti, buddhas from Colombo,
I watch the Wylye valley's willows roll
Slowly to the breeze's brush;
The roebuck stilled mid-field to watch our passing

And, on the bare bank, at last is such
A spray of primrose, petal pool of cream,
As glows against the stormcloud massing
Over the Plain, moment of grace

Warm as this sun now on my face,
Through the open window where I lean
To hear the evening-drowsy blackbird's song;
"Made it, though. Made it through another one."

Cetti's Warbler on the Kennet and Avon Canal

Cetti's Warbler on the Kennet and Avon a video by Dru Marland on Flickr.

Back from the epic voyage down the Thames and then up the Kennet; here's a quick clip of a mystery bird we heard, tentatively identified as a Cetti's Warbler

Just before dawn there's a handover period between the night shift and the day shift. So you can hear both owls and robins. And then you can wonder what it is that an owl hoot reminds you of.

Running in circles in a Preseli field,
I was holding on tight while you pedalled the bike,
Not letting go; until I finally did let go,
And you became Icarus, six years old and flying down the hill,
Finally out of sight round the green lane’s corner.
The whole afternoon held its breath. A gorse pod popped.
And there you were again, waving like a loon.
All this was ours. At night we named the stars,
Tracing Orion’s belt over Dinas Head
As the mice rustled in the hedge.
There was still magic back then,
When you first found out the world’s unfair,
But the hurt could be kissed better.

These April nights, sometimes the clouds part,
And the old familiar shapes appear,
Orion, the Pleiades glow, Cassiopeia;
And there’s the comet that I hoped to see,
Faint there over Filton, soluble aspirin of a star,
Too dim by far to warn of bloody war,
Foretell the fall of emperors.
But bloody wars there are, and emperors do fall.
And for some hurts there is no remedy.
Tonight, I look beyond the stars and see more stars,
And, further, even more, until the sky is deep enough
To fall into for ever.
But we have shared the stars, and just for now
I tell myself that that’s enough, and wonder if it’s true.