The electric tennis racquet is seldom far from my reach these days, as the clothes moths take to the air all around the flat. Lord knows what awful scenes will be revealed if the House Teenager ever gets round to picking up the clothes ("I don't have any clothes") which lie 18 inches deep across her room.

I've been looking into DIY ways of getting rid of the moths, as, fun though it is to swat them with the ETR, the resulting ZAP accompanied by crackling and puff of smoke is a bit distressing. More for the moth than for me, but you know.

Apparently clothes moths are attracted to fish oil. So.... 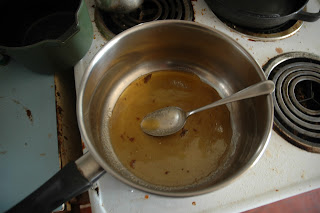 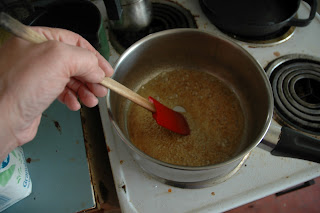 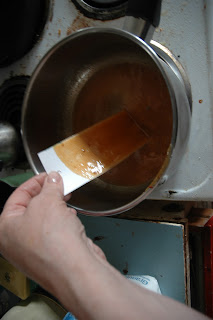 ...dipped cartridge paper into the gloop... 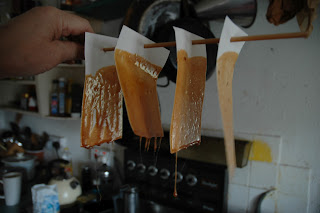 ...and found that I'd apparently created anchovy toffee. Whoops!

So I smeared a bit more golden syrup on the papers and left them to stop dripping. 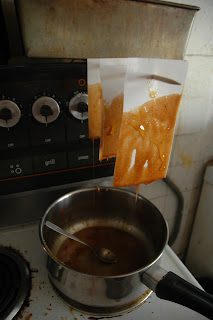 And we shall see what happens when they get hung up around the place. Mothmageddon? Here's hoping.... Watch this space!

postscript: after two days hanging up, the anchovy toffee strips caught exactly 0 clothes moths. And they dripped gobbets of toffee onto the floor. Meanwhile, two strips of fly paper from the hardware store have caught 18 moths. Sally In The Woods Wild Swim (the fifth!) It's time to start planning for the next wild swim. So....

Getting there: I'll be driving, because I'll have a canoe on the roof. Cycling is an option; recommended along the Kennet and Avon Canal towpath, either from Bath or from Bradford on Avon.

The swim should take about an hour. We arrive at Warleigh Weir, where there is a big meadow. And then we get our picnic stuff from the cars, and relax.

Here is the description of last year's swim; and here is the very first big one

Here is a set of photos from the swim.

Here is the Environment Agency's river level monitoring station at Bradford on Avon. This tells you the current level of the river. Put on your spangliest dancing flippers, and get on down to the Attic! Or not, as you please.

It's a benefit gig for the St Werburghs wildlife pond. Here's a Facebook event page for it. It seems that the Church of England has threatened to disestablish itself from the state, as it finds the prospect of 'gay marriage' (or 'marriage equality' as it is more accurately called) too hard to countenance.

How awful that would be! No bishops in the House of Lords, meddling in affairs of state! Please don't go, C of E! On the other hand... close the door behind you, please.
Posted by Dru Marland at 15:20 1 comment:

where the wild swims are

The willows flailed in the wind as we advanced to the lakeside. "Fifteen degrees," John the lake man pronounced, hauling up the thermometer from the water. "Hardy lot, you girls." A crow rose from a conker tree and was flung away by the gale.

Mary was first to the ladder; descending directly to knee-depth, she dived straight in. I was next. "Hesitate and we are lost," I thought. Down in the water and out of the gale, it felt surprisingly warm, at least at first. With a splash, Mal was in too. Rain on water is much more dramatic at eye level; the way it PLINKs all around you. We had a following wind as we swam down the lake, but looking back the way we came my face was peppered with spray. The great willow hanging by the mermaid sculpture rocked to an especially strong gust, the long trailing branches streaming like crowsfoot in a torrent. The wind picked up water from the surface and flung it across the lake. "Spindrift!" I said. "Who'd have thought it, spindrift in Henleaze...

"An appropriate place for him to be," Mary interjected...

"Ha! Yes. He said there's fulmars and petrels off Severn Beach this morning. Loads of pelagic birds getting blown in by the storm."

"Deep ocean birds. From the greek. I think." Some portraits of the nice folk who work at Minuteman Press in Bedminster, Bristol. The drawings are based on photographs, then coloured in Paint Shop Pro. As is often the case, I learned new stuff as I went along; this time, I learned that I really needed a graphics tablet. ..so I've got a Bamboo Fun. Daft name, but it does what I want it to, and looks nice too.