no shipwrecks, and nobody drownded 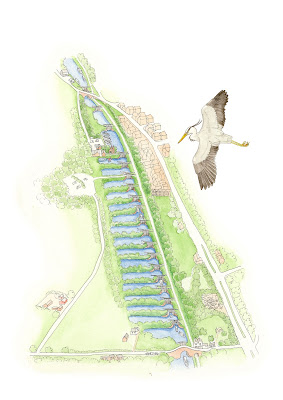 Every now and then, I see a large bird flying high, and wonder whether it is a heron or perhaps even a passing crane, because it has that squareness to its wings that strongly suggest one or the other. But I've never had the binoculars at hand in time to positively identify it. 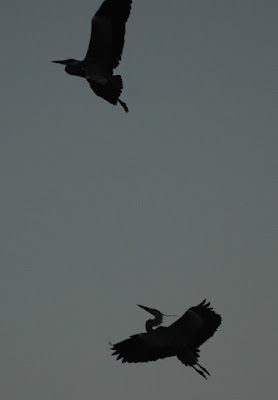 Until the other day, when a chap was talking at me outside my boat, and I noticed an indisputable heron rising on a thermal behind him. "Sorry," I said, interrupting him mid-flow; "there's a heron!"

It goes without saying, of course, that this chap knows as near to nothing about birds as makes no odds. But hey, mansplaining.

I didn't argue; just watched the heron rise, circling, until it disappeared from sight.

On the other hand, there are people who value my knowledge perhaps too much.

Yesterday I went over to have a look at a generator that I'd sold to a friend a month or so back. It'd been running fine until it ran out of petrol; when he refilled it, it failed to start, though it did make a big black smoky backfire.

I took the plug out and reattached the HT lead, grounded it on the cylinder and tugged the starter cord. No spark.

Jiggered around with the wires, tightened up a loose crimped connector, tried again. A big fat spark, then a couple of faint ones... drained the carburettor bowl. Nice and clean petrol.

...took the air filter out, and squirted some Easy Start down the air inlet ( I know Easy Start is bad for your engine, be gentle with me. I'd just found the nearly-full can by the bins and threw it into my tool bag, as you do).

Chris pulled the starter cord. Once. Twice. On the third pull the air inlet belched a flame, which ignited the filter housing. Quickly I doused the flames with the rag I'd just been using to mop up the spilled oil and petrol. The rag burst into flames. Threw the rag overboard. It ignited the dry vegetation on the canal bank. Chris stamped it out enough to throw the still-burning rag into the canal.

Oh well, at least I didn't burn his home out... it was a great comedy moment, anyway. No shipwrecks and nobody drownded.

the barn owl in the Heron Tree field 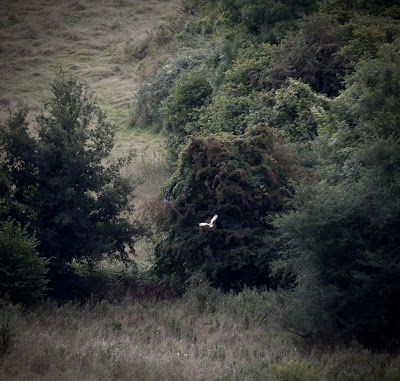 For about twenty minutes the barn owl hunted to and fro across the big field on the hill opposite, that's been ungrazed for ages and is a happy hunting ground for owls and foxes. Frequently it would perform an abrupt cartwheel and drop onto its prey; then it would be lost from sight for a while as it ate; then it rose and resumed its patrol. Finally, it slipped through the gap in the hedge up to the Heron Tree field, and was gone for the day. Presently, a pair of ravens flew high over across the valley. I finished my tea. It was nearly seven o'clock and time for breakfast.

The long heatwave has finally broken; the fields are still tinged brown and russet, but the woods are green and the trees roll like waves when the wind blows over them. The wild clematis is flowering; this valley is dense with it and just now it looks like a paler echo of may blossom. In the winter it'll be bright white and sparkling with frost, but for now it's more maiden's bower or traveller's joy than old man's beard. The nuthatches and woodpeckers are calling, and you can hear the nuthatches tapping away in a cautious sort of way at the hazelnuts. Sometimes a jay will screech; presently they'll be hard at work in the woods, gathering and hoarding acorns.

egret in a tree 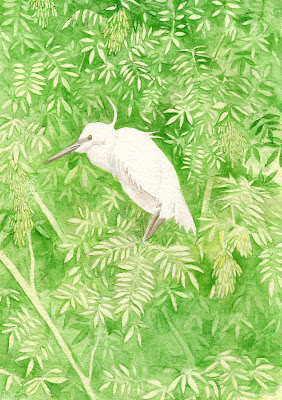 The very first time I saw an egret, we were paddling a canoe up the estuary of the Erme, in South Devon; it was one of those deep inlets where the trees overhang the water, and when we came round a bend we saw one of these trees with several great white birds in. It reminded me of Saint Brendan meeting the fallen angels during his voyages; as their offence had been small, they were allowed to live quite cheerfully and sing praises.

Not that I've ever heard an egret singing, but it was a fine sight.

Up at Great Bedwyn I saw a couple of the local egrets perching in a big ash tree by the River Dun, and took some photos that helped with painting this picture. It was the second time I've used the Two Rivers paper I got from Neil Hopkins, who makes it in a water mill on Exmoor. It's very nice stuff.

The queue in the Co-Op was short, and fairly loose, so I was able to exchange looks with the young woman who was nominally behind me; she was staring intently at me and smiling, so I responded with an interrogative expression.

"I keep thinking you look like a man, but you're a woman," she said. "I keep seeing you around. We've got a man at the school I work at. He was called John and then he said he wanted to be called Helen. He makes me laugh, cos he was a man and now he's a woman."
"How do you think she feels when you laugh?"
"It's funny though, she was a man and now she's a woman"

I'd reached the checkout by then. I paid and waved a goodbye to her as I went to leave.

The woman behind her in the queue hurried across and said "I hope you don't mind, I heard what she was saying, I hope you weren't offended; she's got..." (and here she went into pretend whisper mode with exaggerated mouth movements) "...LEARNING DIFFICULTIES"

"Oh I don't mind at all; I like people who are straightforward; much better than whispering behind your back..."

"I think you're VERY BRAVE"

I finally got away.

I called into the pub where they sell my maps, to drop off some new ones. At a table outside was a friend and a few other people I know. One man is effusively friendly. "Dru! Nice to see you sir! Get yourself a drink, put it on my tab."

I wince, but say nothing. He introduces me to two women at the table, misgendering me again and again and then correcting himself. It's a game some people play, just to show that they KNOW MY BIG SECRET (which isn't one I really try to hide of course). I suspect that they also think that claiming friendship with a tranny makes them extra cool.

I couldn't face having The Conversation, so walked away without a word, went back to my boat and had an early night, tucked up with Humphry Clinker.