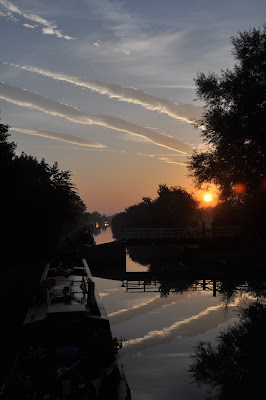 I watched two clouds solidify into what looked like long thin lenticulars, and took a picture of them because it was that sort of morning. They'd already lost some of their solidity by the time I took this, but it's a nice photo.

Sometimes a photo I've taken makes me very happy because it manages to look even better than the actual moment I was in. Sometimes, you just can't capture that moment, real or imagined, with a photo, and you have to either draw a picture of it or accept that some things just have to be lived. There was a nice moment the other night when a low flying Hercules flew across the nearly-full moon. But I didn't have the camera at hand and anyway, it would have been a rubbish photo. You just had to be there. And, of course, you'd have to dig aeroplanes.

The leaves of the big willow by the swingbridge are turning yellow, and falling; not all at once, though; so that I looked up one morning and saw that the branches were becoming visible through the thinning foliage, and the bridge landing is carpeted with leaves. Warblers and long tailed tits hunt through it; in the morning the chiffchaffs sing, and the robins turn up the volume on their song. In the evening, the robins all along the canal begin singing at the same time, and you know that autumn is here. 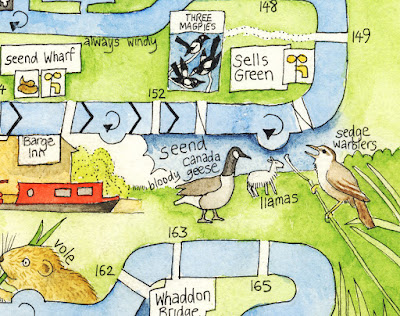 Just up the hill is the herd of llamas that I put on my canal map. I got a message from Jo, whose herd it is; she'd seen the map and liked it. But they're not llamas, she tells me, they're alpacas. She knits their wool, and has started an Etsy shop. "If you see they're lying down, don't worry, they're just sunbathing," she said. I told her I'd noticed this habit of theirs, and sent her my poem.

Alpacas, though. Not llamas.

Llamas have no self respect.
Horses always sleep erect
as do cows, and, I suspect
both elephants and camelopards.
Can it be so very hard?
It seems so. In that nearby field
they lie as though they're lately killed
or they were English holidayers
in Tunisia or Marbella.

death of a deer 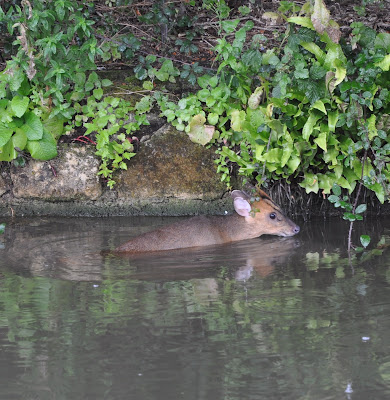 "Otter? ...dog?" -my visitor had seen something odd swimming past the window, and was trying to make sense of it.

"Ah, muntjac," I said, and grabbed the camera. We watched intently; the deer swam to the bank opposite, which was steep and concreted, and tried to get out. He finally succeeded, but was obviously unsteady on his feet, and a hind leg was dragging. He settled under a hazel tree. Presently, he limped along the bank into the undergrowth.

Deer -and other animals, and indeed people -often get into difficulties in the canal; the bottom is muddy and treacherous, and the banks steep and surprisingly difficult to climb out onto, as I have found to my cost on the three occasions I've fallen in. A friend who fell in last January, at night, was stuck in the water for several hours before being rescued, and suffered badly in consequence. At least the deer was saved from drowning, but there was still cause for concern.

We kept an eye on him, and Chris and Jinny, my boating neighbours, called Penny, a friend who is very good and knowledgeable about rescuing wildlife in difficulties. But there wasn't much you could do; the deer was mobile enough to melt into the dense undergrowth if approached. If you didn't know he was there, you'd never guess from this photo, would you? 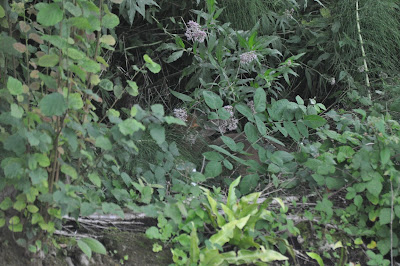 The next day he fell in again, perhaps while trying to drink. When he returned to the hazel tree, we saw that his back leg was evidently badly broken. 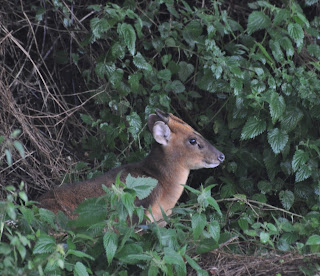 The local wildlife trust sent a marksman, who shot him with a .22 rifle. We rowed across and picked up the body. In death, he seemed tiny. He had abscesses on both back legs and had evidently been very badly injured; rutting? hit by a car? Who knows.
Posted by Dru Marland at 07:31 No comments: 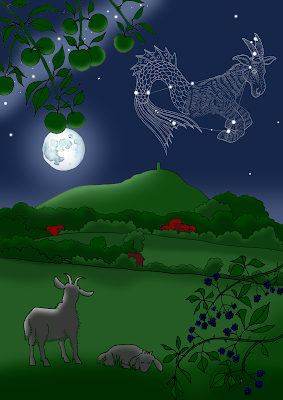 Here's Capricornus, the goatfish constellation. I hummed and hah-ed about whether to have a snowy landscape (because the Zodiacal Capricorn has its time in December/January) or an autumnal one, because that is when you can actually see Capricorn in the stars.

I went for the autumn one, as you see.

I've been looking out for the constellation, but the autumn skies aren't as crystal clear as winter ones, and so far it's eluded me. But the moon is waning so maybe I'll get to see it soon.

Here's another pic I did recently, for the Canal and River Trust in Devizes. It's a panorama of the Caen Hill locks. I tried posting it up a few weeks ago, but the internet's been a bit dodgy out in the wilds. 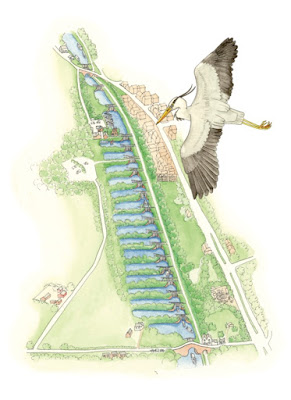