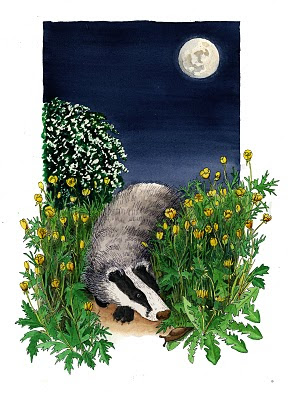 "Slugs is to badgers as rice is to the Chinese"
I've finished the picture, and am very happy with it. I was worried about how the hawthorn tree would turn out; I blanked out the blossom with masking fluid, which I also used to frame the night sky and the moon. It took ages to get the latex solution out of the brush.... I'd never even heard of masking fluid until a few years ago; it's jolly useful. But a pig to get out of a brush.

This picture is for Geraldine's next book, The Case of the Curious Crow. Here's a link to our last book, The Coffee Thrush 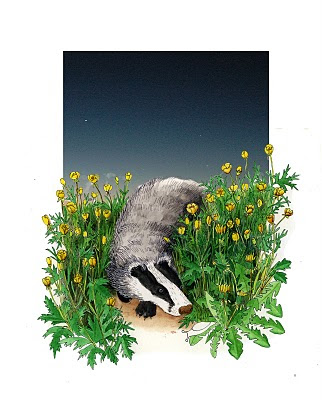 I've been worrying about my failure to keep in touch with people I really should be keeping in touch with, and my apparent aptitude for ending a day with nothing much to show for it. So yesterday at least was a good day because I spent nearly all of it painting. And I quite like the way it's going, so this is the work so far. I've pasted (rather crudely) a dark sky from one of my photos into the background, because I wanted to make sure that it would work, before putting real paint on the paper.

Which I'll do today. Onwards and upwards!

a fit of the vapours 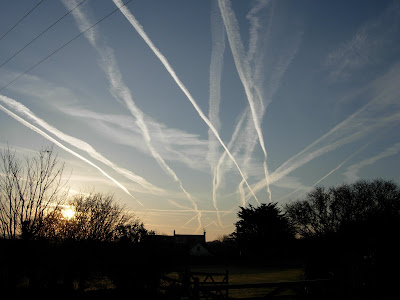 The skies are full of vapour trails as jumbo jets criss-cross the sky again, repatriating refugees from Disneyland and carrying mange-tout from Kenya for a hungry nation! We are saved! It's a bit like Dunkirk and the Berlin Airlift all mixed together, really.


...by the way, there is a really good website called Flightradar24, where you can see what aeroplanes are flying in Europe and where they're going, and so on. And, in my case, you can then pop your head out of the skylight and see them in real life, and know that they are a Lufthansa Airbus en route from Dusseldorf to New York, or whatever. 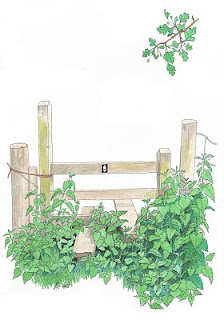 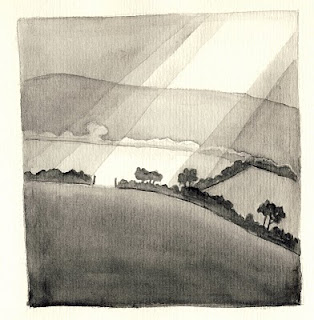 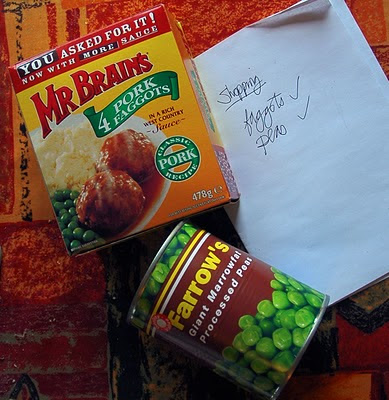 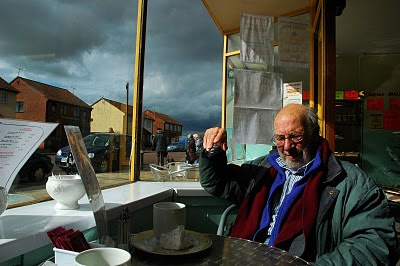 Lovely weather here. I took a break from the accounts and took a walk along the Severn with John, who hates this picture of him, but I like as it's lively and I like the light.

This was an exercise in writing a triolet in between putting the coffee machine on the stove and it making bubbling noises.

(as Suzzy pointed out, the shelf is an odd place to keep the bacon. I replied that it's hard to find a good rhyme for 'fridge', and the fridge has got shelves in it anyway)
Posted by Dru Marland at 12:13 8 comments:

David Bosankoe, who does technical stuff at Acoustic Night as well as playing a mean mouth harp, kindly sent a recording of me reading two poems at Halo on Monday. So here they are. Thank you, David!
Posted by Dru Marland at 06:05 5 comments: 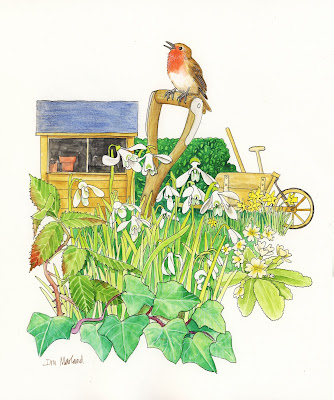 Today I finished this picture for Katy-Louise, who kindly gave permish for me to post it up here. Hi Katy-Louise!

As a bit of a pagan myself, I feel rather untouched by the Easter malarkey. Not that I felt particularly affected by it in my innocent youth; we'd sing "There Is A Green Hill Far Away" and we'd get a Cadbury's Cream Egg at Sunday School, and I at least would feel rather sick by the time I'd finished eating it.

The idea of a great outbreak of self-flagellation followed by rejoicing, as practiced by the more enthusiastic Christians, seems a bit excessively theatrical. Though I'm happy to join in the celebration of rebirth, which is a pretty pagan notion too. So I was glad to be invited to join some friends for lunch yesterday, Easter Sunday, which was a very happy occasion. They're Catholics...

There was another of those odious spokesmen for the Catholic Church on the radio this morning, mistaking criticism of the Church's leaders' history of failure to act upon child abuse by priests, and the continued presence within the Church of people who are at least guilty by their failure to act when they could have acted, for some great anti-Catholic campaign.

I quite like my Catholic friends, and they are good and decent people. It's a shame that their Church is apparently being run by a bunch of men who seem more interested in power than in truth or justice, and who seem to think that they occupy ground of sufficient elevation to allow them to make pronouncements about People Like Me. Silly arses.

Never mind. It is springtime, and not everyone is nasty. Rejoice, therefore!

Off to a poetry reading this evening, where I shall read out my Egret triolet, which is possibly fairly spiritual. And possibly just a poem about birdwatching. Decide for yourself, gentle reader! It's in the next post down.