Here's a bit of devilry for Hallowe'en. Though the devilry is, of course, on the part of the people who persecuted the yellowhammer, or yoldring, rather than the bird itself.

This is what E & MA Radford have to say about the bird, in their Encyclopedia of Superstitions 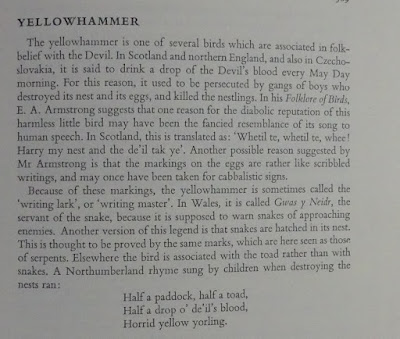 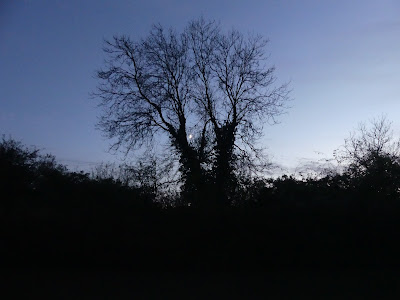 moon in the ash tree
oh! Where did all the leaves go
since I last saw it?

Change sneaks up on and past us, and then you look at a photo taken a month ago and think how much greener everything was then, and look out, as I did, last night, and go oh!

...and I am getting on with commissions and Christmas card and calendar designs too. This one has Netty on it, as I thought it would be nicer to look at than my ugly old boat. I took liberties with the relative scales of the aqueduct and the boat, though that would be v much in keeping with the style of the aqueduct's builders. Did you ever look at nineteenth century pictures of ships or buildings and wondered at how HUGE they were? -that's because they were drawn to look impressive. Like earlier pictures of prize animals, exaggeratedly massy. In this case, the aqueduct loses out to the boat. Soz, aqueduct. 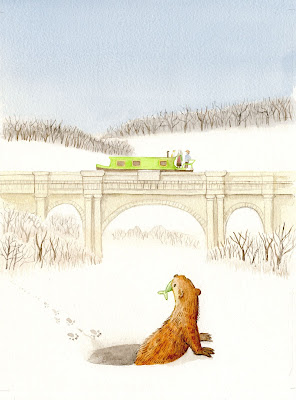 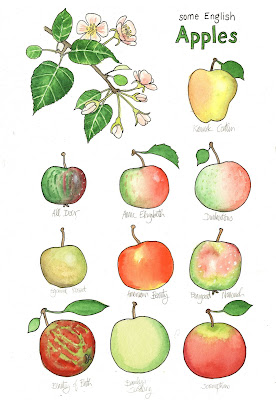 here are some english apples. Because it's Apple Day.
Posted by Dru Marland at 06:48 No comments:

Saint Melangell and the hare 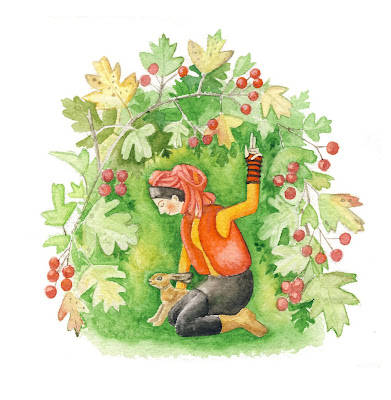 It was in the work of Kay Leverton that I first came upon the story of  Melangell and the hare, and wanted to do my own version. Melangell was a recluse in the hills of North Wales, and was being all spiritual in a thicket one day when a hare took refuge with her, and she protected it from the hounds and the huntsmen that had been chasing it. The local prince, on arriving on the scene, was struck by her saintliness and gave her the valley where her church, and the village of Pennant Melangell, are now situated.

I thought it would be nice to portray her as a bit of a hunt sab. So this picture is loosely based on a friend who fits that description.

I was trying out some paper that Neil Hopkins of Two Rivers Paper gave to me (thank you, Neil!) It's handmade by him, and rag-based; and very different from what I'm used to using. It's very forgiving; you can lift watercolour off the surface and try again if you goof, and you can layer it up to make quite intense colours. I worked on a very small scale here, which was a mistake; but there you go, we're always learning, hopefully...

up the Bradford Flight 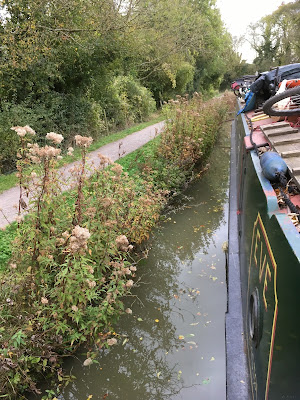 It was time to go up the Bradford Flight, that majestic series of one single lock that marks the frontier between the upper and lower West End of the K&A. Below, the cool wooded valley; above, the broad, sunlit (or windswept, depending on the season) uplands. 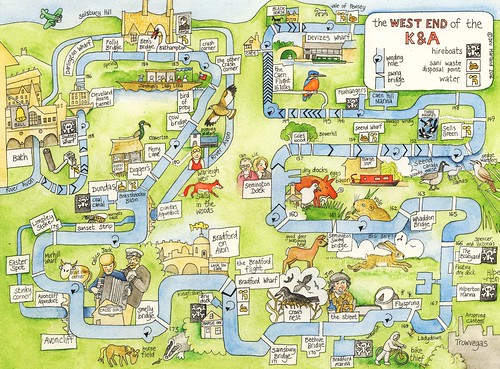 On The Street I failed to get alongside at first, as it was so shallow; breasted up on Fairy's boat for a while and scouted out the stretch further along. The Netties had found a nice spot by the winding hole, where there is some hard standing that you can get alongside; but our friends on Pathfinder, moored close by, were stuck way out into the canal because of the lack of water under the keel. 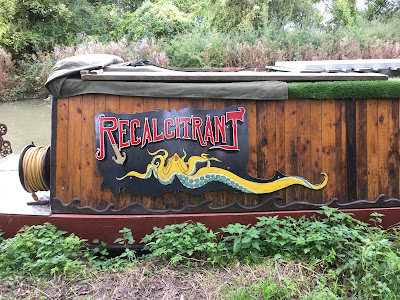 I admired the artwork on Recalcitrant, and considered hanging around until they moved off on their way to Bristol. I met this boat some years ago in Tewkesbury, where it had been left high and dry by the winter floods of the Severn. Really very dramatic, as you see. 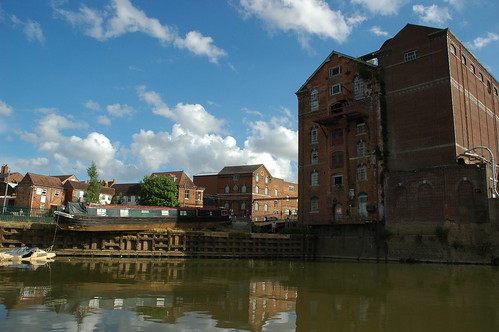 ...but Astral Dave was moored right there, and life is never quiet when you're moored near Astral Dave and his cosmic dog.

So I sailed on and found a nice spot between reeds, where I was able to get close enough alongside to use my gangplank, and yet far enough away from it to be able to pull the gangplank in at night and feel secure behind my moat defensive... because this is the badlands here, and there has been a lot of thievery and wanton destruction over the summer; two bridges have been damaged by having great blocks of stone pushed out of their parapets down into the canal.

But that aside, it's a nice enough spot and there are good neighbours; and the kingfishers perch just opposite, and if I look out of the galley window while washing up, I see the water vole nibbling industriously away by its hole. 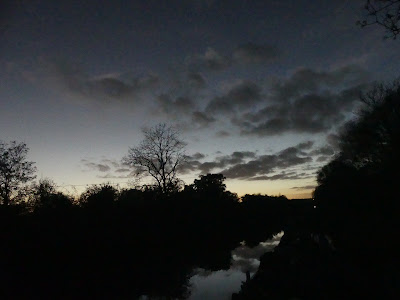 getting out and doing poetry

It's been a busy week or so. Last Friday I was guest poet at Can Openers, Poetry Can's monthly open mic lunchtime event at the old fire station in Bristol's Broadmead.

I looked up the very first time I'd read a poem in public; that was also at a Can Openers, in Bristol Central Library that time, eleven years ago. I walked in and the first people I met ("are you here for the poetry?") were Annie McGann and Alan Summers, the very first to welcome me into Bristol's poetry scene.

This time, I was reading from Drawn Chorus; and suffered the sort of pre-event nerves that had me retching that morning.

It went pretty well, though, I think, and it was nice to catch up with some friendly faces I'd not seen for ages. Sadly, no photos.

Monday's launch party was at Monty's, a rather nice cafe run by May Colquhoun in the Montpelier area of Bristol. She also kindly invited me to display the illustrations from the book, so I had a frenzy of ordering up prints and buying frames from IKEA ( as you do). 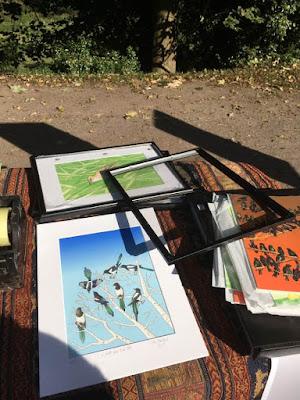 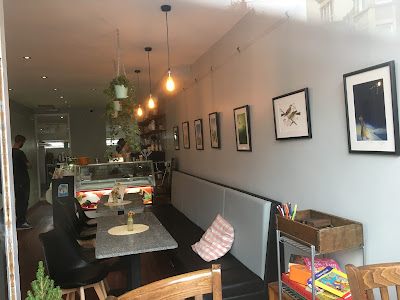 And the evening also went very well; there was a nice crowd of people, some of whom had travelled a fair old way to be there, like Adrian, Carol and Lorraine here, friends from the canal. 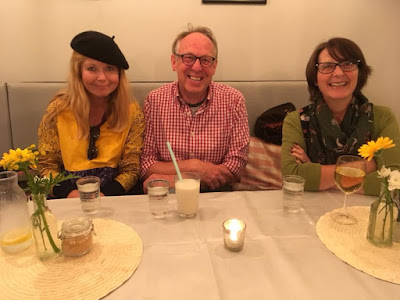 ...alas, no other pictures.

Colin Brown, Deborah Harvey and Pameli Benham also read some of their poems from the Gert Macky back catalogue and elsewhere. Thank you!

Poetry Can is a great organisation, doing good things in the Bristol community. And they've lost their Arts Council funding. Which is a right bugger. 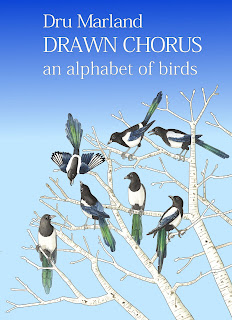 As part of Bristol Poetry Festival, there's a launch party for the new book, at Monty's Cafe, 62 Bath Buildings, just off Picton St in Montpelier. Monday 9th October. Starts at 7:30. Wine and nibbles and stuff, and guest readers.

There'll be an exhibition of the illustrations too.

It's a really nice cafe run by May Colquhoun, fresh back  in her hometown after a couple of years of adventurous cooking in Australia.

I'm also guesting at Can Openers this Friday. More details on this and the rest of the festival, over at Poetry Can