hey, you, get offa my tree

It's always a heck of a party when I lay the blanket on the ground, let me tell you. A quick shake of the damson tree and before you know it, the earwigs are dancing a sprightly Roger de Coverley around the damsons; the harvestmen tiptoe gingerly away; and a bush cricket manages to look ever-so-slightly peeved as it takes stock of its new tartan surroundings, thinks about it for a moment, then hops off to somewhere that doesn't clash so violently with its bright green overalls. 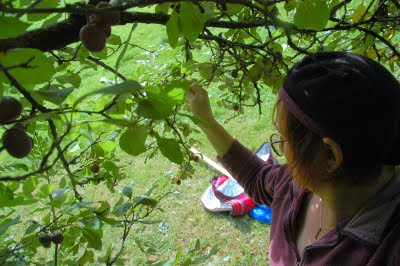 I was getting the last of the fruit from the local tree, yesterday morning; then for good measure, I picked a pile of apples too.

Home again, the damsons were washed and put in a pot in the oven to soften them up for making 'cheese', which is the local version of membrillo, I suppose you could say.

And then, as it was still bright and early on a sunny day, Deborah, who is no slouch when it comes to wild harvests, came over, and we went off to the Mulberry Tree Of Plenty, in the heart of Clifton. It's just about my favourite tree, because mulberries are so very nice and because it is very climber-friendly. 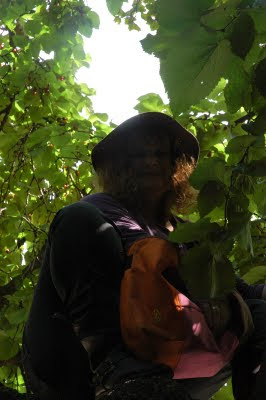 You have to be careful with mulberries, as they're so very juicy; and even if you are careful, you end up with hands that look like you've just slaughtered a pig. Last time I picked some, I was knocked off my bike on the way home, and when I saw the splodged mulberries on the road my first thought was that my brains had been splattered out. Not a good thought....

A couple of years back, I met Kayle Brandon up the tree; she's done a wild food guide to Bristol, that I feel a bit ambivalent about; the thing about nice trees is that it's good to know where to find them, and a bit of a bore if you get there and find that someone else has stripped the tree, especially if they're doing it commercially. Oh, and she organised the 'Feral Food' event at the Cube, that I helped out with....

This year, we met a tree troll. He was small and wizened, and advanced towards us, shrieking "What are you doing in my tree?"

Fortunately, I know how you deal with tree trolls. You start by fixing them with a steely gaze.

I showed him my basket of ripe mulberries.

He explained that he picks them and sells them to a local greengrocer. I told him about Kayle's wild food map. "Middle class people," he snarled, "making money out of it".

I reminded him that his interest was mercantile, but he seemed to think that his was the Right Sort Of Mercantile.

Eventually, he wandered off to catch his bus.

"What's your name?" I called as he departed.

He paused and thought about it. "That's a state secret," he said. 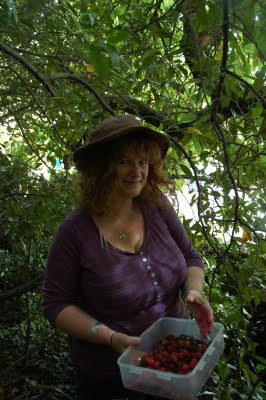 Two young women came by, with buckets. They were collecting money for a charity. They stopped and asked for some. Deborah and I held out our empty but bloodied hands to show our lack of money.

"Have mulberry instead," I said, and selected a particularly nice one.

The charity collector looked askance at it. "What is it?"she asked, "a berry? Is it poisonous?"

"Best berry there is," I said, and put one in my mouth to show how to do it.

She held it up and touched it tentatively with a lip. Then backed away and continued along the path.

"She's not going to eat it, is she?" said Deborah.

"Bet she's thrown it away already."

Bless the British suspicion of Food Off Trees. As long as it persists, there's always going to be nice things to eat for nothing. 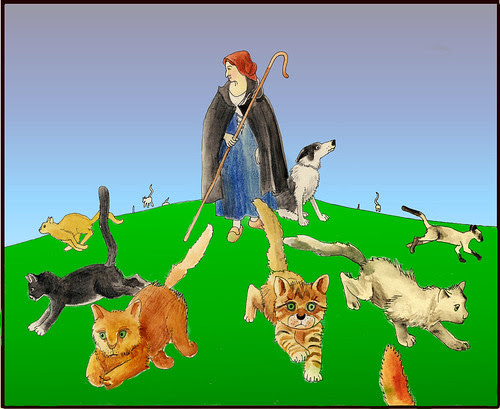 This picture's intended for a forthcoming piece about the trans community. I knew what I wanted to draw pretty much straight away, and determinedly didn't Google 'cat herding' before drawing the picture. And was quite happy to find, on Googling it afterwards, that it isn't ground already hugely covered. You never can tell with these things...

On a technical note, I thought that, as it was a quick cartoon, I'd economise by using a sheet of cartridge paper; there's a great pile of it under the bed, that I inherited from Marta when she was tidying up her studio. Normally I'd have used Daler-Rowney's Langton Extra Smooth Watercolour Paper, which works out at about 80p a sheet. Stupid me. The cartridge paper didn't take the watercolour very well, and it took for ever to clean up the scan on Paintshop Pro, as it looked all muddy and grey, before flooding in the sky and the grass. Moral: always use the best materials you can get. *bangs head on wall a few times in hopes that lesson will sink in....*
Posted by Dru Marland at 07:54 3 comments: 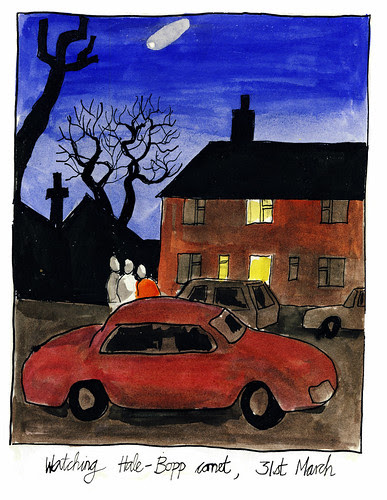 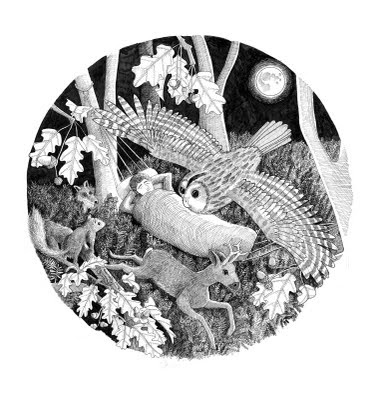 Here's a friend of Geraldine's. He's called Drew (no relation), and he's been living in Leigh Woods on the other side of the Gorge from Bristol, for the summer. This picture accompanies Geraldine's description of Drew's experiences, and is for the next issue of the Bristol Review of Books.


And here's another round picture; it's for Andrew Sartain, chef, keeper of Gloucester Old Spots and inveterate forager- constantly off hauling fish out of the sea, hunting down fungus and doing unspeakable things to game animals. You will probably find him at a Farmers Market near you, if you happen to live in the Bristol and Bath area. Try the sausages. They're good. 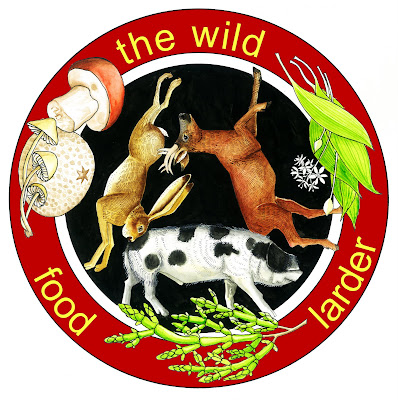 And is it true? And is it true,
This most tremendous tale of all,
Seen in a stained-glass window's hue,
A Baby in an ox's stall?


Oh post-Anglican muddling, somewhere between the unpleasantly excessive certitudes of the God-botherers and the atheists. We have our quietly spiritual moments, and model them in the trappings and half-remembered rituals of the faith we were raised in; one populated by a blond, bearded Jesus and assortment of goodies and baddies, dresssed as for the Nativity play. And somewhere in the background, an urbane God, moving in a mysterious way, but almost certainly On Our Side. Even though we ruefully acknowledge, in quiet moments, that we have left undone that which we ought to have done, and done those things which we ought not to have done. Oh yes.

Reading Richard Beard's Lazarus Is Dead was like returning to the village I was brought up in, but now being included in the grown-up conversations, and finding that there was much more going on than I'd previously noticed. Lazarus and Jesus are childhood friends; the core narrative of the book describes the last year of Jesus' life, and the last year of Lazarus' first life, as it were. It examines the difficulties you face when your best friend turns out to be the son of God, and therefore either less or more than human; and how disruptive it can be to your life when you're just trying to get on with things and suddenly find yourself part of a divine plan. If that is what it is.

There are layers and layers going on here; the story is true to the biblical narrative, as far as that goes and as far as that is consistent; beyond that, there are historical records, and artistic and literary interpretations of a story that we thought we knew but (in my case at least) turn out not to know that well. And, of course, Richard's own telling of the story. Romans and Sanhedrin work hard at realpolitik to shape events in a manner favourably to them. Points are missed. Wrong is got, in a darkly comical way. Lazarus tries to make sense of it all. Does he succeed? Read the book, and maybe you'll find out.

The story is vividly told; the past is brought to life. And there's enough space in this book for any shade of belief or unbelief. I enjoyed it hugely. Go and do likewise.