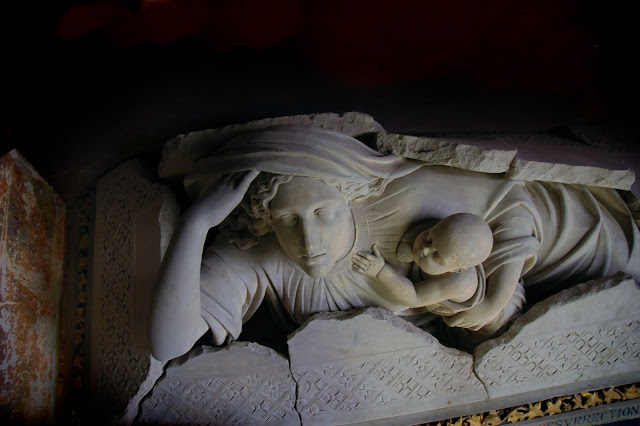 For the second time in my life, I was bimbling through the Blackdown Hills in a Moggy.

We were coming home from Devon, and the traffic on the M5 was heavy. And it was a good day for bimbling. So we headed eastward through Culmstock and Hemyock, along narrow lanes with high hedges that sometimes brushed the passenger window and set the aerial wobbling dangerously.

Beyond Churchinford, I saw a church tower among the trees, near a hilltop. It looked vaguely and unexpectedly Italianate, and very inviting. We pulled over. "I'm just going to detour up there," I told Katie, who had been doing a pretty good job at navigating by our tatty road atlas, for someone who loathes the job; "For who knows if we shall ever come this way again."

It was the church of St Mary's, at Buckland St Mary, and it was built in the 19th century. And I was glad we'd turned aside.

Most unexpected, and indeed startling, was this memorial to Madalena Louise Lance and her infant son, who both died shortly after his birth in 1839. The superscription reads In memory of one much beloved who departed this life clinging entirely to her Saviour as her only hope. And below her run the words I believe in the resurrection of the dead.

...I recall a former missionary telling us at school that Africans use wooden crosses on their graves to facilitate their picking them up and carrying them on Judgement Day. This very literal sense of a corporeal resurrection came to mind when I saw this monument; it reminded me of a time when my own faith was unshakeable and unquestioning...


Phil Draper (ChurchCrawler) adds: "The new 'Somerset North and Bristol' Pevsner is due out next month, and the South Somerset volume is also under revison for a new edition
The new information added... says this monument is unique in England, and is based on a similar theme at a church in Switzerland. Interestingly though there are two other memorials in Somerset where a man is shown climbing out of his coffin (Brent Knoll - in a panel below the main monument), and most famously at Rodney Stoke where the shrouded deceased is the main figure sitting up in his sarcophagus." 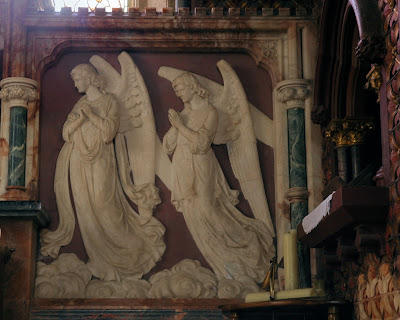