The last time I tried to make bread in the solid fuel stove, it was pretty disastrous. Unless you count as success a loaf that is carbonised on the outside and doughy on the inside.

So I've added a wire shelf inside the Morso Squirrel, as you see. It is made from one of those big cages that people (some people) keep their dogs in, and which I rescued from the rubbish bins on the canal a few months ago.

We made pizza in there the other evening, and v tasty it was too. But we were so hungry that I didn't pause to photograph it. So here is a baked potato, baking.

You have to let the fuel (in this case, logs) finish flaming and settle into a good glow, before putting in the food to be cooked. And then it's a race against time. The potato was just cooked by the time I needed to throw fresh fuel on.

(postscript) Here's a loaf baked today. It's a bit burned underneath, but it's OK and was v nice to eat some slices with my dinner....

There was a time when I occasionally read the Spectator, though admittedly it was in the 70s and then only because it was in the school library. Still, it was quite readable. So it was a surprise yesterday to read a bit of clickbait that they'd commissioned from one Brendan O'Neill....

Why are trannies so touchy? So touchy that even that use of the word ‘tranny’ – which, yes, is designed to make a point – will have them reaching for their pots of green ink so that they can pen outraged missives about what a transphobic monster I am?

...it doesn't really get any more intelligent than this, sadly. So rather than respond with outrage, here's a limerick for Brendan, and a lament for another publication that's gone down the toilet.

My pan of bacon, black pudding and mushrooms was just about ready to eat. Above the sizzle and spit of well-cooked breakfast came a deep rumbling. "Thunder? Surely not", I thought. The window darkened as the view became one of cattle legs and flanks heaving by.

I switched off the gas and popped out onto the foredeck, in time to see the last of a herd of cattle and calves hurry along the towpath. The two speed skater walkers who go by every morning, arms swinging wide, appeared from the trees. "We hid in the bushes!" they said, and continued westward, arms a-swinging.

I watched the receding herd, and pondered. No question of heading them off at the pass- the towpath was entirely filled with cow. But- what was this? They were getting bigger again. They had turned back! I jumped on my bike and pursued the speed walkers, tinkling my bicycle bell furiously. "Can you help get them back into the field?" I asked.

They looked a bit uncertain, but were game for giving it a go. At the swing bridge, the gate into the field from which the cattle had escaped was closed, and had been closed for years by the look of it. There was a gap by the stile where the cattle had evidently pushed through. I parked the bike across the swing bridge, and we three made a line across the path, using our most dauntless expressions, as the lowing herd wound swiftly up the path, pursued now, I saw, by Craig, my boating neighbour and one to whom dauntlessness comes naturally.

It became obvious that the cattle were not going to push their way back through the small gap, so we revised the plan. I moved the bike out of the way, and shooed them towards the swing bridge. There were a few anxious minutes as they shuffled uncertainly, and a calf and a cow jumped into the canal. But then the first adventurous cow advanced to the bridge, and crossed. And then the rest followed. The cow in the water made her way over and clambered up the bank of the winding hole. Finally the calf scrambled up onto the towpath and Craig shooed it across to join its mum.

Presently the farmer and his hands appeared, and after much running up and down, flicking of sticks and shoutings of "Hup!", got the herd back into their field.

The Wiltshire Times covered the story, but our part in the business was, naturally, unsung...

the Tao of Morris

In the pulsing heart of Bristol, I established my very own Island of Unmoving. This was simply attained by the Traveller's clutch rod snapping as I negotiated the St James Barton roundabout. I rearranged some useful traffic cones to reduce the likelihood of a taxi getting all Zen on my rear bumper. Some passing drivers scowled at this imagined impediment to their progress, and others smiled. A familiar-looking bearded chap waved cheerfully, and shortly after I got a text from Matthew, whose beard it was, offering assistance if needed. But I'd already called the recovery service, which duly arrived in the form of a flatbed truck with a winch on it, and a cheerful Geordie driver who was the sensible type of chap who was able to accept immediately that I knew what the problem was, and that here was no place to attempt repairs anyway.

With the car safe in Cotham, I called Mal, who took some time out from her busy day to take me down to the Morris Centre where I bought a new clutch rod.  "Guess how much?" said the chap at the spares counter.
"Um.... £8?"
"I'll just change the database... no,  £6.13!"
Bargain. They threw in some washers and a split pin too. And ten minutes after returning to the car, it was ready to go again. It is not the breaking down that is important, Grasshopper, it is the fixing.


Here's a picture I did for the new edition of Broadsheet, the poetry magazine broadsheet for the South West, and brainchild of Simon Williams. It contains heaps of good poetry, including, by remarkable coincidence, a poem about a peacock and a wren, and it is v cheap. Go buy!


Meanwhile, this photo I took the other evening has become the most-viewed pic I've ever taken, with it having just passed the 27,000th view on Flickr. Which just goes to show what I sometimes* say; that technical ability has got nothing to do with a good picture; you just have to point the camera at something good. The camera in this instance being my iPhone in panorama mode.

*but not always, for that would be boring.
Posted by Dru Marland at 12:39 No comments:

Some evenings, it would be a positive sin to stay indoors. Against the deepening red of the sunset, the local ducks flew quick sorties in neat vics of three or four, wings swishing as they criss-crossed the sky at all altitudes. A loose stream of laconic crows barked their way from right to left in the vague direction of the rooky wood. It reminded me of the Battle of Britain, with the crows as Heinkels and the ducks as the Spitfires. Casually mixing my film references, as the indigo of the evening intensified, groups of geese came whooshing by at low level. That was obviously the Dambusters. 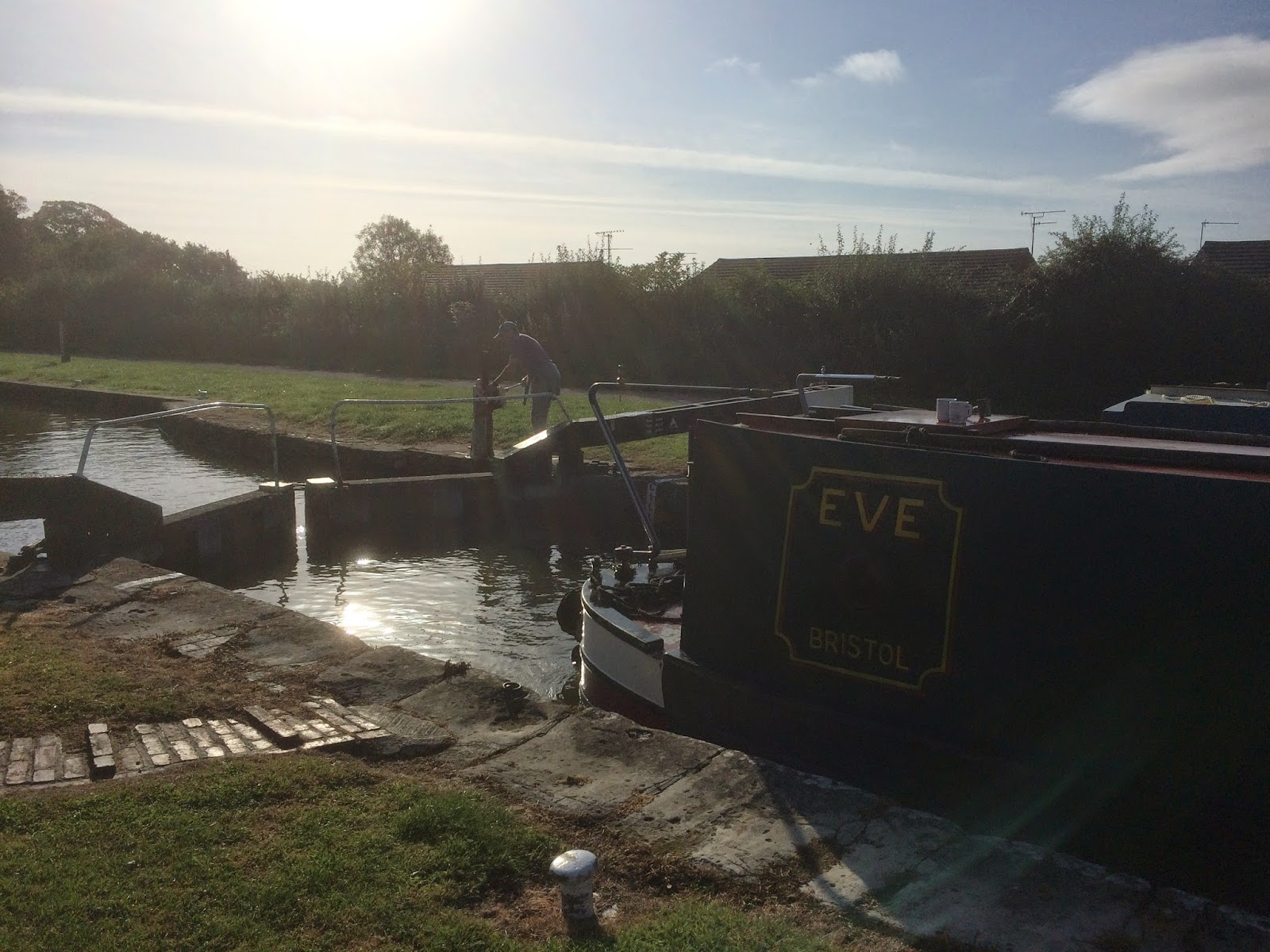 Bringing a boat down the Caen Hill flight of locks is a day's work. And you need understanding friends. Which in my case, on Wednesday, was Richard, who came over for the day. We coupled nb Eve with my floating neighbour Dave's boat, and I piloted the paired craft in and out of the locks while they did the hard work. There's not much clearance when you have two boats together, and it was a bit stressful, though I tried to retain an appearance of nonchalance and possibly insouciance too.

Having negotiated the first few locks from Devizes Wharf, we paused at the locks cafe for bacon and stilton butties, as you do, and a couple of boats passed us on their way down. Dave got antsy and anxious to get on. So we did. And I was so busy that I didn't get time to take photos of our descent, on what Dave claimed to be the steepest flight of locks in the world (though I suspect that while it may possibly be the flight with the greatest height difference, it may not be the steepest. Wikipedia, be my friend here. Aha. Yes. Caen Hill has an overall gradient of 1:44 with the main staircase being 1:30 - the Bingley Five Rise has a gradient of 1:5)

Nor indeed did we get time to eat the humungous pan of gammon and pea soup that I'd prepared for the trip, so Richard and I had some for dinner instead, before walking back up to Devizes to fetch our cars, and to admire the sunset.

By Thursday evening I had eaten a lot of gammon and pea soup, and woke up in the night feeling rather ill. Then I got to sleep, to be woken again at 4:00 by the carbon monoxide alarm, which was chirping in a desultory manner. I tried to look on the internet to find out what the message on the display meant, because I couldn't find the alarm manual in the dark. But my phone battery was flat, so  the phone died just as the page was loading.

This, dear reader, is how things ALWAYS happen on boats.

"If I go back to bed and die of carbon monoxide poisoning," I thought, "I shall feel VERY SILLY INDEED."

So I drove over to Somerset instead, because I had a busy day planned that involved all sorts of errands in the Bristol area.

I occupied my brain by composing haiku as I drove. It started in Melksham when I saw

The nonchalant fox
its shadow loping slowly
under the street light

There were several dead badgers on the road too, either knocked down or dumped by unscrupulous badger killers. They had yet to be flattened by the passage of the coming day's traffic, and were quite alarming when they were

picked out by headlights
the temporary speed bumps
of dead badgers 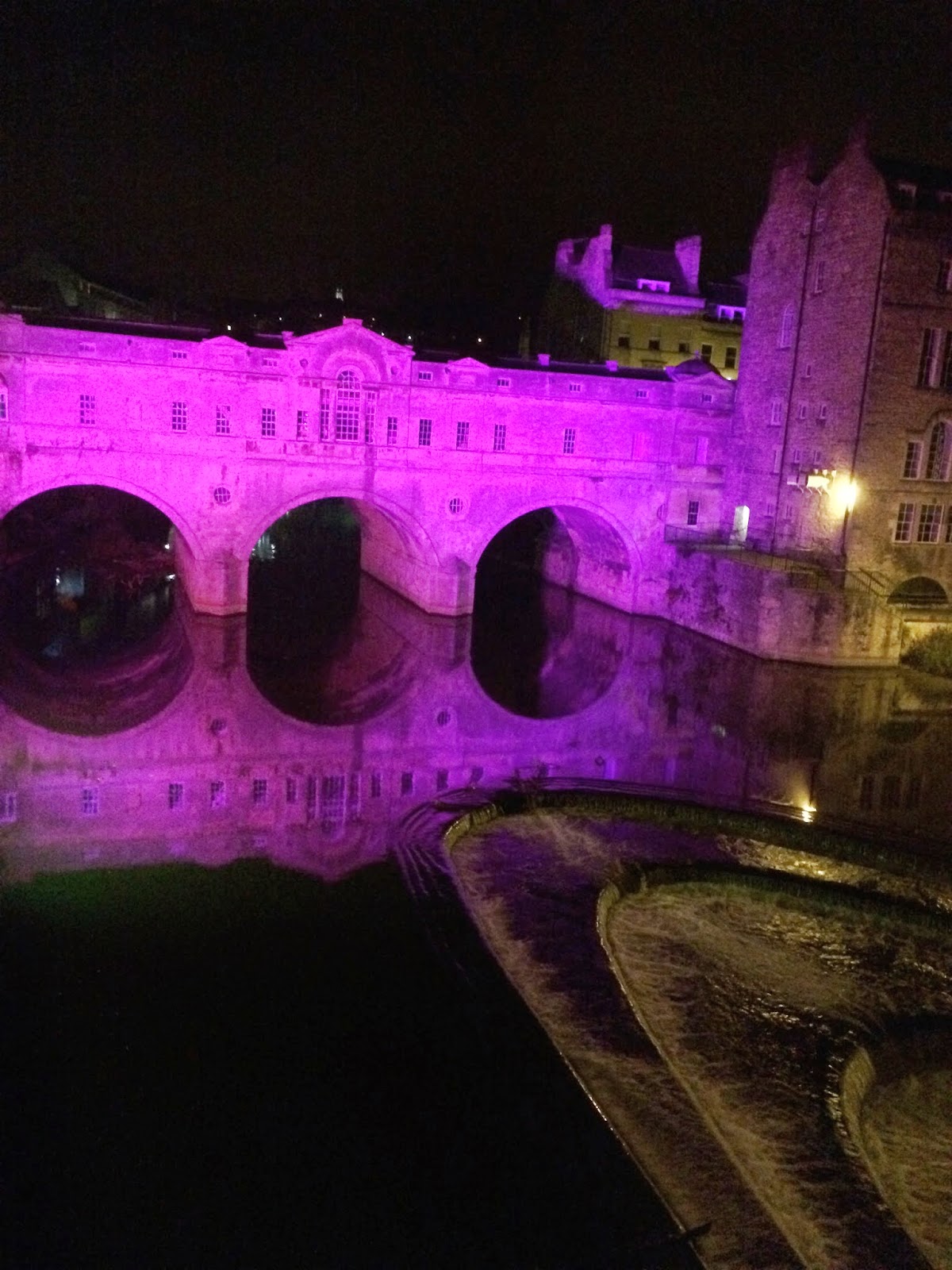 Some creepers in the hedgerows were so vividly red that they were red even in my headlights. As I arrived in Long Ashton, I saw that the first great shedding of leaves had begun on the ash trees, and there was a great carpet of beech mast in the lane 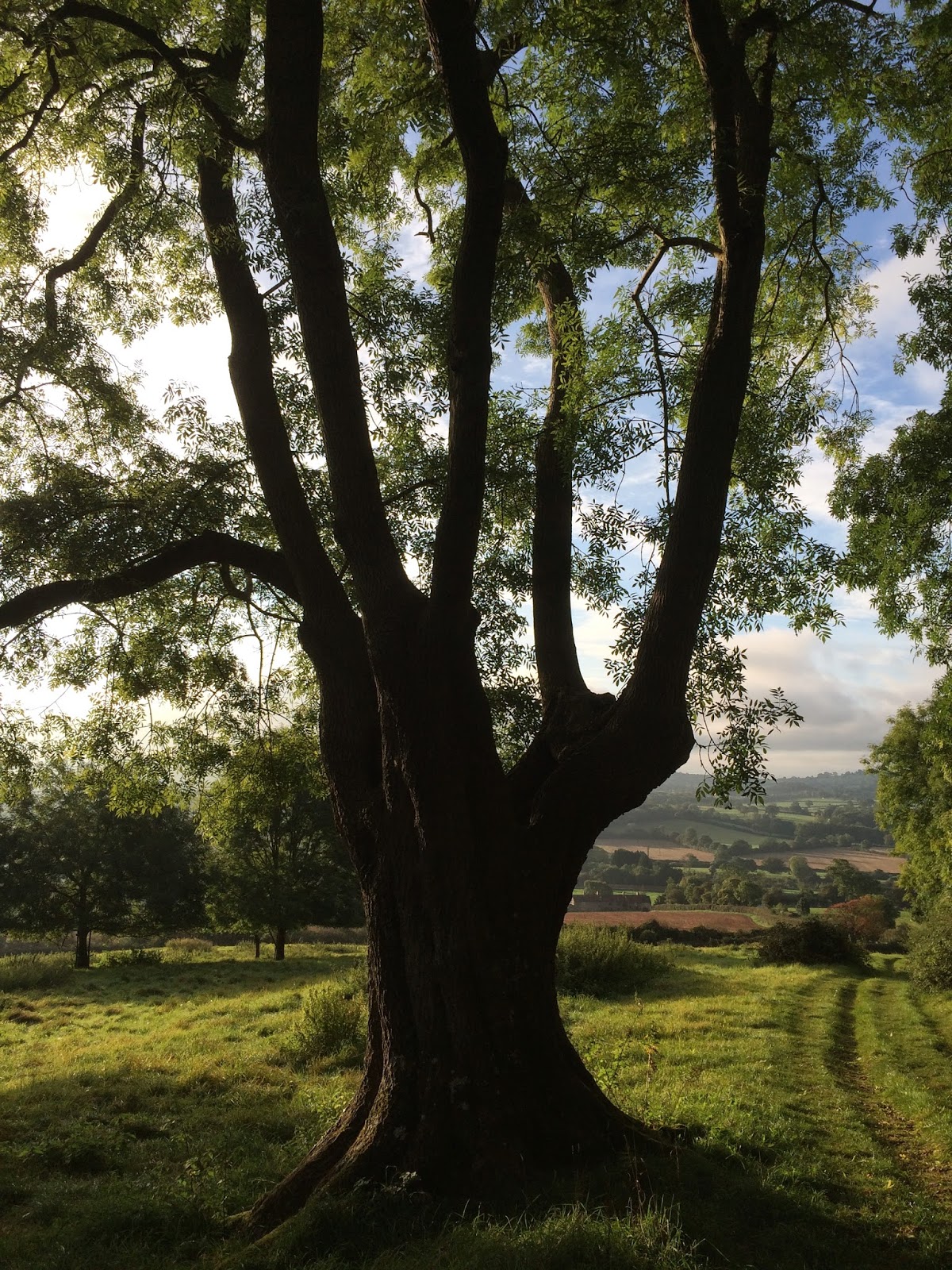