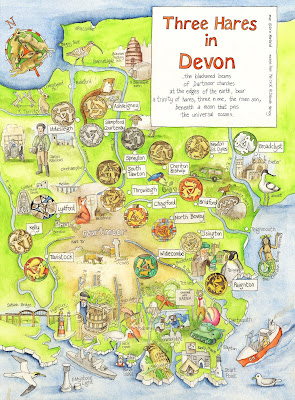 Seven years after drawing my first Three Hares map, I thought it was time to have another go at it. So I have. Just like the previous one, it shows all the locations where the three hares can be found in Devon; the seventeen churches where they can be found in the roof bosses, and the pub in Lydford where they're in a stained glass window in the door. 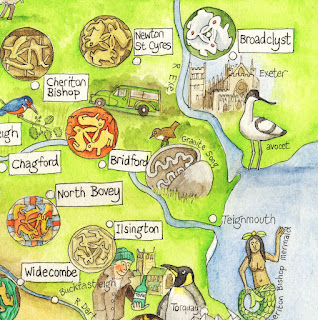 There's the mermaid from Cheriton Bishop church, and Peter Randall-Page's Granite Song sculpture sitting on an island in the Teign near Chagford. 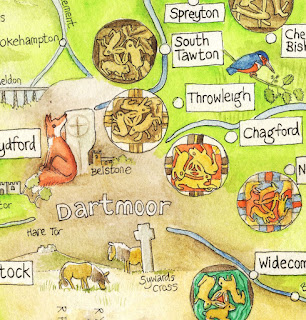 And here's the Belstone Fox, and the circle cross in the church there. We walked across this bit last year while researching for the Archangel's Way, a new thing put together by Exeter Diocese; we also met Paul and Adrian, vicars of Chagford and Sourton respectively, who are part of the team putting it together. It was due to be launched this summer, but obviously things got in the way...

I've got the map in A4 and A3 sizes, and as large and small postcards. Here's a link to the A4 size on in my Etsy shop

In which I meet the one-eyed dog of Caen Hill

In the pre-dawn half-light I was listening to the rain and looking at an alarming weather forecast.

I've been cruising up from Bradford on Avon towards Devizes, in company with Sebastiene and Louise and their young son Indra. We'd reached Sells Green the day before, which is a good starting point for a day's ascent of the Caen Hill locks, and we had friends on standby to help. It was not looking good; on the Met Office phone app, all day there was a black cloud with two raindrops coming from it, and a yellow warning of thunderstorms. I conferred with Sebastiene, next door, and called off the helpers.

Presently though, Seb suggested that we might just as well go up the first few locks to be ready in Rowde for the main flight today.

It was an early start, so early that the fisherman in his little tent by the waterpoint at Sells Green must have been fast asleep, so that he could hear neither my Big Noisy Engine nor my shouts and whistling as I approached. He suddenly leapt out as my bow fouled his lines, and dashed around like a mad thing as I pulled alongside, trying to decide whether he should be righteously indignant (which is, after all, the natural state for anglers). “Looks like you caught the big one!” I said.... I went astern and he finally freed up his line and pulled out a big branch that he'd also managed to catch. Amazing what you can find down there. I gave him a cheery wave and sailed on.

The rain had that unusual quality of being very persistent, but curiously undampening. So after a stop for breakfast, we pushed on, the two boats lashed together and me driving, and Seb dashing to and fro preparing the locks. Louise was down below, looking after young Indra.
We were the only boats moving, and it was really quite relaxing; not a breath of wind to get the boats crabbing; the clearance between the combined boats and the lock entrances is a matter of inches, and you really don’t want to go pranging the buttresses. Bad for the brickwork, bad for the hull.

Entering the locks, I put a bit of stern way on to slow the boats right down then dashed up the lock ladder to stop them entirely with the centreline belayed to a bollard. Doing it at one lock I leapt up the ladder to be confronted with a large, startled and very shouty dog. “He’s only got one eye” said the woman whose creature it was. Thank you very interesting. Like ITS ALLRIGHT HES ONLY BEING PLAYFUL in terms of usefulness when your dog is attacking someone.

Three locks short of the top, the rain changed its mind and became the extremely wet sort.

Gongoozlers sheltered under the trees entertaining themselves with our antics. "How long would it take you to get from Bristol to Reading?" asked one of them, as I finished winding up one of the paddles. This is a dangerous sort of question, because it distracts me from the not-so-obvious but vitally important task of keeping an eye on the boats in the lock as they rise; any snag and you've got to shut off the water rushing in, as quickly as possible. Boats can sink in locks, and regularly do.

"About a week to ten days" I said. It's probably completely wide of the mark, but at least it weas an answer. It then got me estimating it in my head; Bristol to Bath one day; Bath to Semington one day; Semington to Devizes if you're really keen, one day... 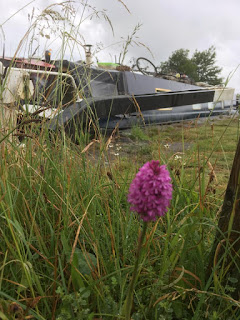