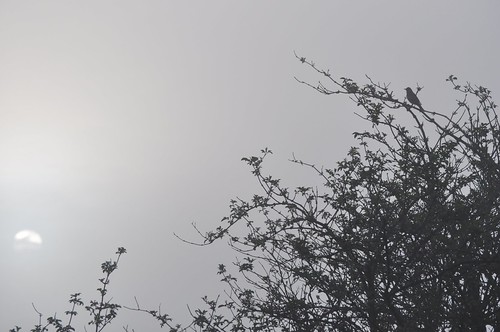 In the dawn stillness the mist hung heavy in the valley, beading the spiders' webs that loop between all the brambles and bracken of the towpath hedge. I took my big mug of tea with condensed milk in, and walked towards the song of the willow warbler that only began singing properly yesterday.

There it was, in its favourite tree. I slowly brought the camera up; it would have been such a good picture with the rising sun right behind it.

It bounced away. Willow warblers are like that; flighty, uncooperative, ever so slightly passive aggressive- that song of theirs, beautifully melancholy though in an "I'm all right really, don't worry about me, no, no, I'll just sit here then" sort of way.

A little further on, the song thrush was greeting the sun, which perhaps makes it a brightling thrush. I managed to get a photo... 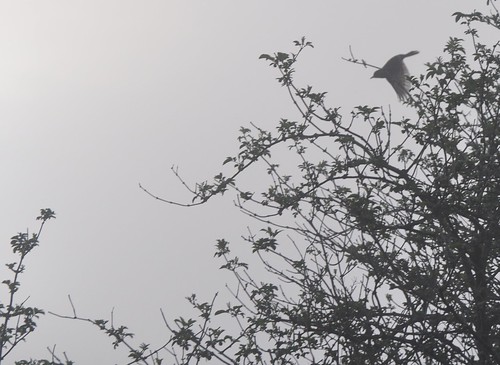 ..before it dived out of sight.

Yesterday I talked to Roger McGough on the phone. As you do. I'd put in a request to Poetry Please.... four years ago.... it was for Deborah Harvey's poem about starlings (and families) that I really rather like. Well, obviously, or I wouldn't have requested it. Judge for yourself, gentle reader.

birdwatching without the beard

Cycling through Conkwell woods on my way home, I passed Kevin walking his dog. So I stopped, and noticed that the ramsons had begun to flower. The woods and the steep bank down to the Avon are carpeted with wild garlic. I dropped down towards the flowers, and slipped on the mixture of mud and shiny leaves. There'd been a lot of rain earlier. So I aimed at a tree and did a sort of controlled fall at it, which saved me from ending up who knows where.

Scrambling laboriously back up, I passed through great wafts of garlicky pong. "It's not real garlic, though," said Kevin.

"Isn't it?" I wondered; "There's all sorts of garlics and onions." I thought of the round headed leeks and keeled garlic we used to find on the Bristol Downs, and one whose sole habitat is apparently St Vincent's Rock by the Clifton suspension bridge (though I've found it elsewhere...)

With a smartphone, the internet is seldom very far away, and of course you can trust the internet.
So I looked it up. "Gosh, bear garlic" I said- its latin name is Allium Ursinium. "I suppose it's very handy for them, given what they famously do in the woods."

I love this time of year when everything is speeding up towards summer; it's getting hard to keep up with all the new things, though. Last week I heard a few tantalising notes suggestive of a blackcap; two days of that, and it had warmed up its vocal chords enough to go for a full song. It's been the same with the chiffchaffs a few weeks ago, and as I write this a chiffchaff is in the hazel tree right opposite my window, alternating its song with little fluttering flights. And yesterday I was sure I'd heard a whitethroat, though again only briefly and tentatively.


I stoked up the fire, because the day had never quite got warm. Presently the sun came out, and in the brief lull before the evening chill set in, I set to making a tortilla for dinner with my nice neighbours. Taking the potato peelings out, I noticed a white bird on the hill across the valley. The binoculars told me nothing much more than that it was a big white bird. But it didn't look very seagully. I set up the camera and watched.
After a while it flew across the field, and landed in a conifer. Its flight revealed decided bird of prey wings, with black bars on them. An osprey? I wondered. A passer-by wondered what I was looking at. When I told him, he explained to me that it couldn't possibly be an osprey, and looked at me as though I were simple.

Reader, he had a beard.


Mind you, when I finally found my big book of birds, a hen harrier seems the likeliest contender. 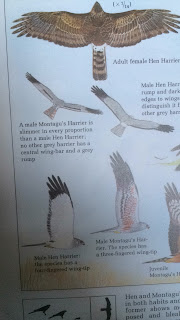 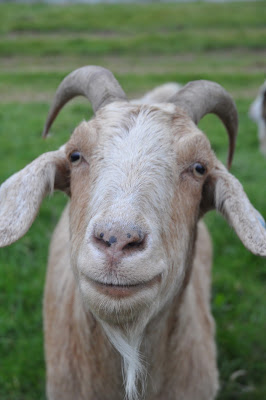 You can't keep a good goat down. After their escapade on the aqueduct, they'd been rounded up by their nominal owner. And on Sunday morning they were outside the boat, delicately nibbling brambles, breakfast of champion goats.

I moved the boat down to moor alongside the Dawdling Dairy, and put out my pictures. So visitors could go for ice cream, storytelling, coffee, bike repairs and art, either separately or all at once. 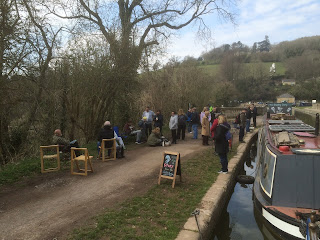 It was a good day, notwithstanding a small group of the cravat-wearing classes sneering their way by, remarking 'It's very touristy round here' as they glanced dismissively at my pictures. I reminded myself that the english middle class is essentially both philistine and anti-life, and was cheered immensely by a chap from California who enthused over my canal pictures, and bought two prints! 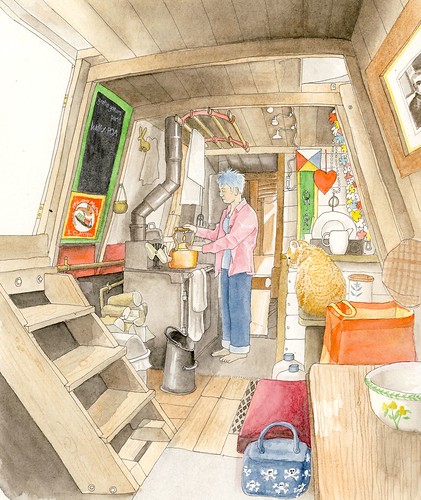 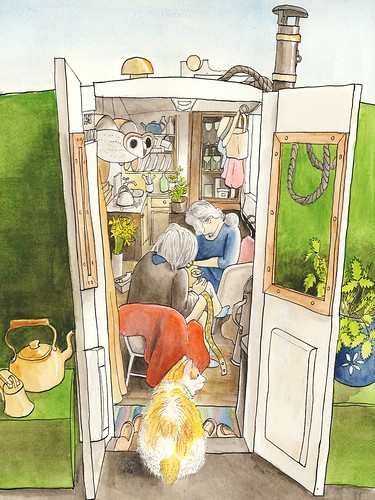 He'd recently bought some prints by Eric Gaskell, so my pictures will be hanging in distinguished company....

As the sun set, Sarah splashed along in her new rowing boat and we went adventuring in Conkwell woods, collecting kindling for her stove. On a rotten stump, the leaves of bluebells had been nibbled right down by the deer, whose dietary preferences are evidently rather more gentle than those of the goats.

Sarah dropped me home and rowed away as the first owl began hooting. 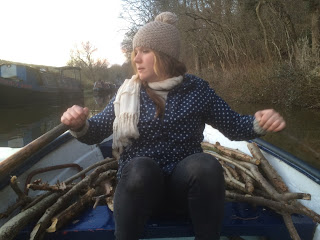