an occasional table - the movie

occasional table - the movie a video by Dru Marland on Flickr.

The mystery that is the occasional table. The film poses questions but refuses to answer them.

A while ago, I was interviewed by Fiona McClymont from The Spark, Bristol's 'alternative' magazine and one that we in Bristol are very fortunate to get free, four times a year. Fiona was most concerned that we should get it right, and I am very happy with the finished article. Thanks, Fiona! The interview appears as one of their 'Changemakers' pieces. You can read it here, hopefully. I'm on P 47


...I do feel ambivalent about doing this sort of thing,  because there is an inherent contradiction in appearing in a magazine precisely because I have a trans history, and the central message of the piece which is that 'there's more to me, and more to life, than being trans, so let's get on with it'. Still, as long as trans people are exoticised and treated as caricatures, then it remains a message that needs telling, and the only way of telling it is to be 'out'.

I have had quite a bit of positive response to the article. I also just found this message to me, which, as it represents a point of view very much at variance with my own, I add here.

Yesterday I had the unfortunate and unwanted task of dealing with your irresponsible article. In fact I've only just finished crying. By your and others necessity to continue to label themselves as "trans" has made my life more difficult and its only when I explain to people that I don't associate with the Trans term and that I'm a women do I get treated as a women. So thank you for that.

a place for everyone who identifies as transgendered, in whatever way

I'm in the last few months of supported Wpath NHS transition which is a wholly medical process known to those that dish it out as Transsexualism. I am a women, always was and will be. The idea that people with gender dysphoria and gender identity issues are labelled Transgender is all well and good, but I don't suffer from gender dysphoria or gender identity issues so this umbrella term no longer applies. Your use of trans as a pronoun or adjective is most unfortunate as all you are saying is that you are an "illustrator that used to have a penis". This off course is totally open for all to make unwanted associations; as you allude to. Which is why I'm upset and baffled as to why you want to continue to label yourself as such. My understanding is that you are a women, but how you want to call yourself is up to you off course, but if any body calls or labels me "a trans person" then I'm disgusted and angry as any woman would be. How dare you suggest that I'm ugly or look like a man. Unfortunately a whole swath of people that have entered the GICs in this country are now throwing the Trans word around as though they own it or define it. Those people are pushing and hurting those like myself that remain quietly going about our business. For me and many others there is no third gender. All we ever wanted was to appear as how we felt. Now even that is being spoilt by articles such as yours.

Basically you're trying to make people associate me with being a tranny, a cross-dresser, a transvestite, a drag queen or gender queer; which usually comes with a gay man somewhere in there. This is the most saddest and most destructive and dangerous part of my life. I have to avoid the associations that articles, such as yours, and practices, such as those I've -already mentioned, that can put me directly into a frightening, unwanted and dangerous situations. I am a normal women that doesn't have any interest in cross-dressing, transvestites or any such stuff. You've just put that straight into peoples head. Thanks again.

Any hows, I've had to cut out and delete most of what I originally wrote as it probably was too upsetting or strong. But really thanks for putting yet another downer on the whole affair. 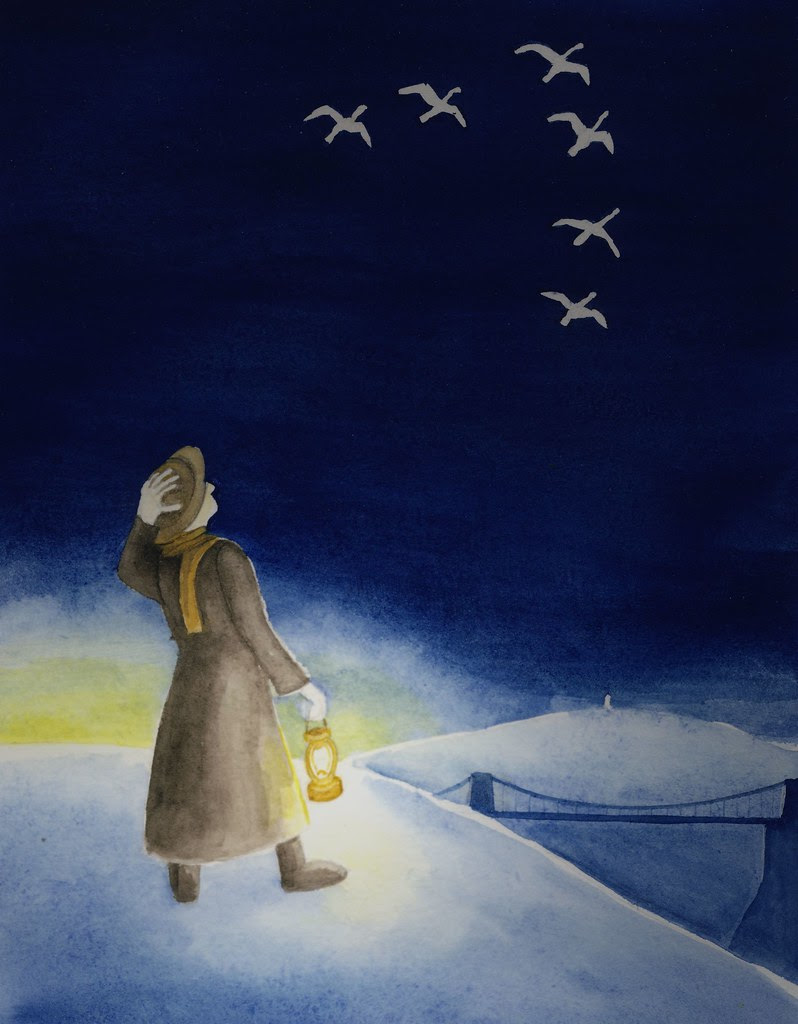 Sometimes on a winter night here, you can see the wild geese flying high overhead, lit by the city lights. The first time I saw them, I was in the back garden drinking coffee before setting off on my motorbike to join a ship; I felt like a fellow traveller. Last winter I saw them when I was up on Observatory Hill admiring the snowy landscape.

Vol de Nuit is a book by Antoine de Saint-Exupery; checking up, it turns out it's not one I've read, and it ends badly. I used it as the title here because of that feeling you get when travelling at night, which reminds me of the mood of his books. And of course it sounds dead arty. Pretentious? Moi? Oui, cher lecteur.


...here's the soundtrack for a night journey- Jonathan Richman and the Modern Lovers: Roadrunner. 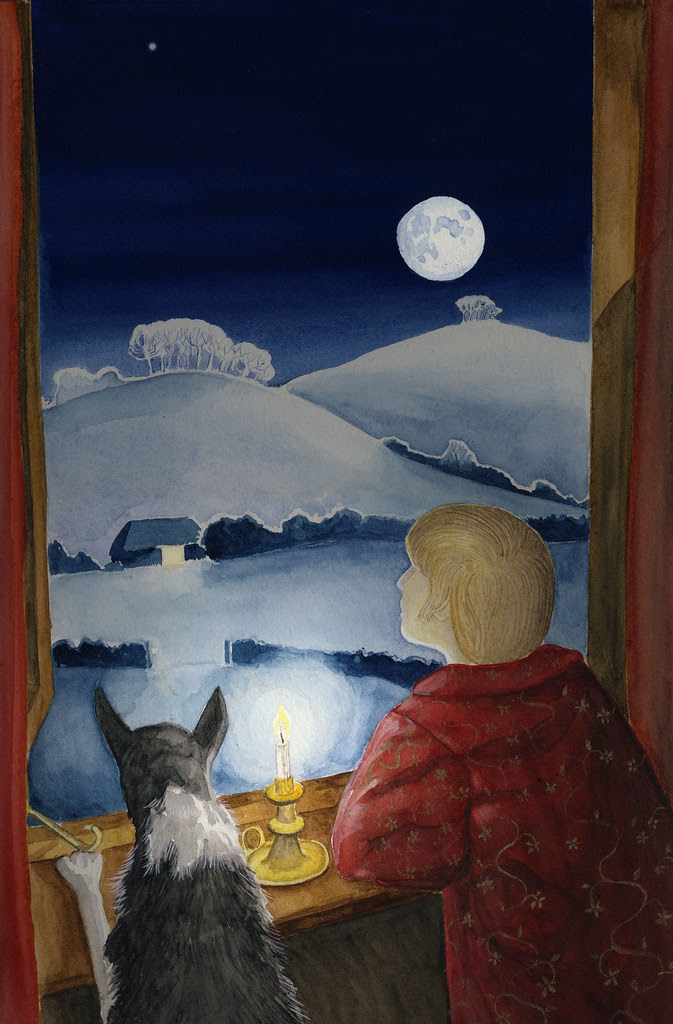 Christmas Eve, and twelve of the clock.
"Now they are all on their knees,"
An elder said as we sat in a flock
By the embers in hearthside ease.

We pictured the meek mild creatures where
They dwelt in their strawy pen,
Nor did it occur to one of us there
To doubt they were kneeling then.

So fair a fancy few would weave
In these years! Yet, I feel,
If someone said on Christmas Eve,
"Come; see the oxen kneel,

"In the lonely barton by yonder coomb
Our childhood used to know,"
I should go with him in the gloom,
Hoping it might be so.


I love this poem; it fits my own feelings at Christmas quite well. I remember the sense of magic about the Christmas story, and feel its absence now I am both older and a lapsed Anglican (ex-Anglican? post-Anglican?); magic, for me, is now far more elusive, though still there sometimes in the corner of my eye.

So I wanted to do a picture to go with it. It was a bit of a rush to get it finished in time for Christmas Eve! We had a good day; House Teenager was busily either painting at her desk or learning Fairytale Of New York on the ukulele, and I was doing this.  The gold paint for the detailing on the dressing gown was a bit of an experiment, and I quite like it- you can't see the glow of the paint on this image, but it's there! House Teenager posed for the picture, as did Ted, Deborah's lively galoot of a collie.
Posted by Dru Marland at 19:41 4 comments:

An interesting article on Huffington Post focuses on the implications of a line from a telly show, Husbands:  "I'm a man with an exotic femininity in a society that regards the feminine as a sign of weakness."

I found it particularly interesting because of my own, trans experience of that attitude. From an early e-mail from an old friend telling me that I wouldn't solve my problems by flouncing about like a pantomime dame (she hadn't seen me, she just naturally assumed that this is what trans women do, I guess) to a criticism of my behaviour by the Chief Engineer of the Pride of Bilbao, cited at an Employment Tribunal; "she acted in an exaggeratedly female manner", he said, though he didn't explain how I managed that.

He wasn't there in person; his 'statement' was read out by Sandra Ray, a personnel officer with P&O. "Has anyone ever accused you of acting in an exaggeratedly female manner?" I asked.

She seemed a little surprised by the question.

The surprise was, of course, due to the perception of my femininity as being purely performative; as they evidently saw me as a man, any feminine behaviour on my part was exaggerated (though I'm still not sure that I did anything that I would have described as characteristically gendered either way). But in a wider sense, femininity is seen as performative, whoever is performing it. Indeed, some people see all gender behaviour as a performance (in the sense of it being artificial), rather than simply performative (in the sense of being what we do); and some see femininity as a divergence from best practice, which is, by default, masculinity.

There's an element of this attitude in the uber-trans woman who insists that she never wears skirts, but lives in jeans, when others lower down the pecking order are enthusing about their new-found freedom to explore female clothes options. It's one-up-person-ship, of course, but still buys into the narrative.

Julia Serano is a useful read on this stuff, by the way, if you haven't encountered her "Whipping Girl:  A Transsexual Woman on Sexism and the Scapegoating of Femininity".

(a quick and imperfect post, shall review it later...) 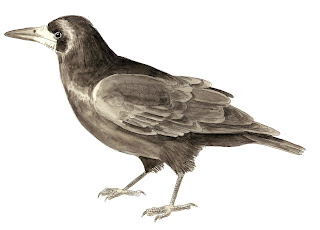 Of all the corvid family
It's rooks wot wears the trousis
Though only then down to the knee
-the rest the cold wind blowsis
The last few days have been seriously cold in Bristol; the hoarfrost remained unthawed for ages, and the local crows have responded to the freezing conditions by shouting obscenities in the trees at the back of the house; "FAAAACK....FAAAACK". Crow calls on cold days seem particularly appropriate. It got me thinking of how cold birds' feet must get. Hence the rhyme, which doubles as a useful aid to identification.

House Teenager's feet must get pretty cold too, being generally bare. "Why don't you put some socks on," I asked. "I don't have any socks," she said. I suspected that this meant that the socks were under the great heap of clothes that covers the floor of her room. But I dug out a pair of hiking socks for her, anyway, from my marginally less chaotic pile.

Change is blowing in now, though; a breeze sprung up in the night, and it's gone all foggy and, well, at least it's above freezing. You notice the weather when you don't have central heating!
Posted by Dru Marland at 06:59 4 comments:

the trews is out there 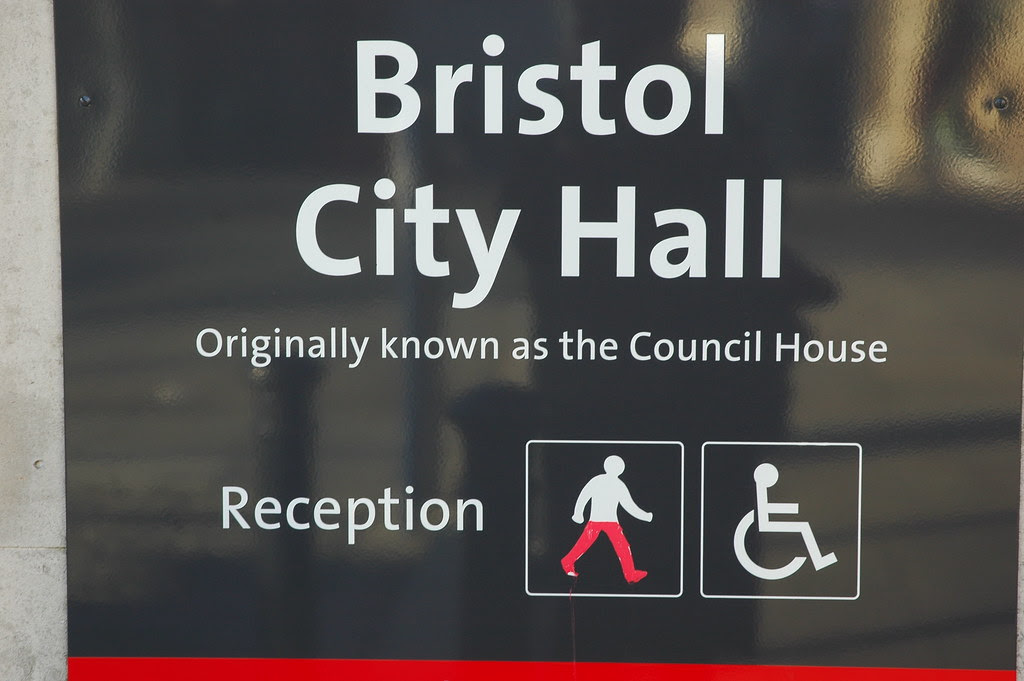 One of the first acts of Bristol's newly-elected Mayor, George Ferguson, was to change the name of the Counts Louse to Bristol City Hall.

This sign appeared outside the building the other day, and was immediately adjusted to include George's 'trademark' red trousers.
Posted by Dru Marland at 19:07 2 comments: