putting the Grand Western Canal on the map 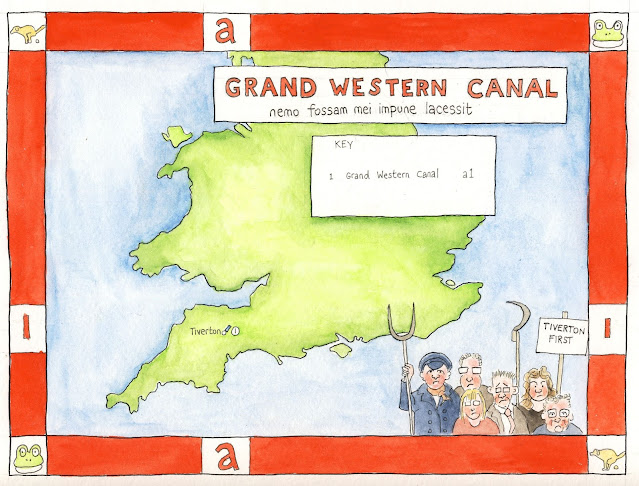 Maps are potent things in modelling our view of the world. We see it chiefly through the lens of the Mercator's Projection we had on the classroom wall at school. Britain centre top, northern hemisphere uppermost.

Some folk don't quite get that a map is a model and not the thing itself. Its purpose is to transfer information. The London shown in the Underground map is famously different to the actual terrain. But it does an excellent job of getting you onto the right train.

I knew that when I published my map of the canal network, I'd get the mutterers-into-pewter-tankards, of whom there is absolutely no shortage on the cut, cavilling and carping about things they thought I'd missed out.

This is all very much par for the course. And such cavillings and carpings were made and responded to, if not to the satisfaction of the cavillers and carpers, at least to my own.
More bothersome was an organised pile-on on my Facebook page from enraged Tivertonians, for whom Fridays are obviously not a busy day. They quite rightly pointed out that the Great Western Canal, a short stretch of which remains extant in the vicinity of that Devon town, was not only missing from the map, but hidden under the title.

I in turn pointed out that I'd omitted lots of small and unconnected canals and waterways in the interests of clarity and relevance.

They did get quite hostile, not just about my map but my personal qualities.

So I have obliged them with a map of their very own.

I'm sure the Grand Western Canal is lovely.  And the Angry People in Local Newspapers Syndrome is not peculiar to Tiverton.