getting knocked off the bike

On 30th September, I was knocked off my bike in Clifton. I was turning right into Worcester Road from College Road, and a car that was waiting to emerge from Worcester Road pulled out into me, knocking me off the bike, and injuring me. 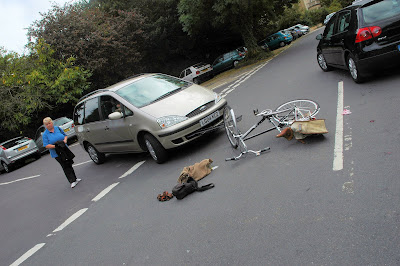 Last week I got a phone call from the Collisions Support Unit, telling me that they were not going to charge the driver with anything, as they had received a witness statement claiming that I had been going too fast, and that I was not signalling, and that I was cutting the corner. None of this is true, so I was really rather upset. I wrote back to them, as follows:

To: Collision Support Unit
Avon and Constabulary
Re; ROAD junction with , . Time: 12:30 Hours Date: 30th September 2009
Dear Sir or Madam,
I refer to this incident, when I was knocked from my bicycle and injured, while turning into a side road, by a car emerging from that side road.
I received a phone call from a member of your unit on Wednesday 4th November, advising me that you did not propose to take action against the driver involved in this incident. I understand that a witness has given his opinion that I was to blame, alleging that:
I am very concerned by this, on the following grounds:
I appreciate that you are busy, but I feel that I have been wronged. As it seems that I shall be denied the possibility of cross-examining the witness at a hearing, I should be most grateful if you would question him further to clarify what he actually saw, as I am sure that he would not willingly be understood to have said something which is not true.
Yours sincerely,
Drusilla Marland

...well, I heard back from the police this morning; a police officer phoned me and said that they were not going to take the matter any further, as they can't just go around interviewing people who have sent witness statements in, in case it discourages them from doing it, or something. So I (and indeed the police) will never get to ask the mystery man why he said what he said.