a brush with the archivist

More from the Little papers, pulled out of a Clifton skip fifteen years ago. Here's an incident from 1950, which all started with a piece in the Bristol Evening World, a long-defunct newspaper. Well, actually, it all started with the Blitz... 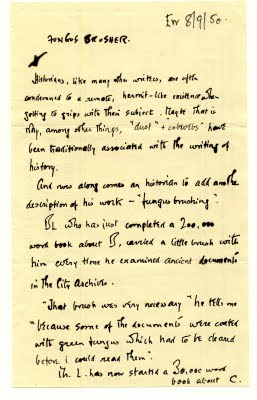 Historians, like many other writers, are often condemned to a remote, hermit-like existence when getting to grips with their subject. Maybe that is why, among other things, "dust" and "cobwebs" have been traditionally associated with the writing of history.

And now along comes an historian to add another description of his work - "fungus brushing".
Bryan Little who has just completed a 200,000 word book about Bristol, carried a little brush with him every time he examined ancient documents in the City Archives.

"That brush was very necessary," he tells me "because some of the documents were coated with green fungus which had to be cleared before I could read them."
Mr Little has now started a 30,000 word book about C...... 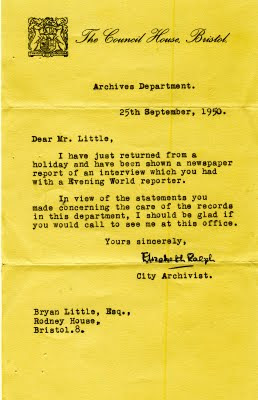 2. Letter from the City Archivist

I have just returned from a holiday and have been shown a newspaper report of an interview which you had with a Evening World reporter.

In view of the statements you made concerning the care of the records in this department, I should be glad if you would call to see me at this office. 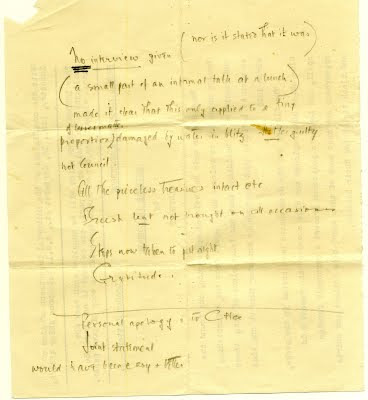 3. Notes made by Bryan Little (for the interview with the City Archivist?)

No interview given (nor is it stated that it was)

(a small part of an informal talk at lunch)

made it clear that this only applied to a tiny proportion of lesser matter damaged by water in the blitz. Hitler guilty not Council.

All the priceless treasures intact etc

Brush lent not brought on all occasions

would have been easy & fitter 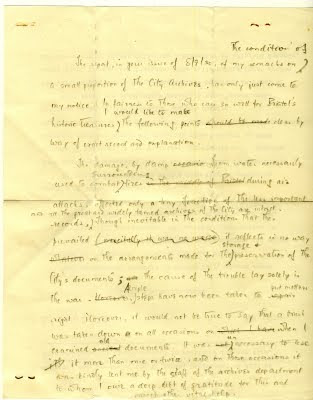 4. Draft of letter to Evening World

The report, in your issue of 8/9/50, of my remarks on the condition of a small proportion of the City Archives, has only just come to my notice. In fairness to those who care so well for Bristol's historic treasures, I would like to make the following points clear by way of exact record and explanation.

The damage, by damp from water necessarily used to combat surrounding fires during air attacks, affected only a tiny fraction of the less important records, and all the widely famed archives of the city are intact. Though inevitable in the conditions that prevailed it reflects in no way on the arrangements made for the storage and preservation of the City's documents; the cause of the trouble lay solely in the war. Ample steps have now been taken to put matters right.

Moreover, it would not be true to say that a brush was taken down on all occasions when I examined old documents. It was unnecessary to use it more than once or twice, and on these occasions it was kindly lent to me by the staff of the archives department to whom I owe a deep debt of gratitude for this and much other vital help.