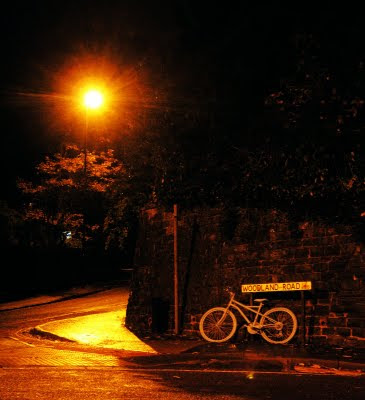 At the last tally, I know of three cyclists killed in Bristol this year. And ghost bikes have appeared in the city. If you haven't heard of them, ghost bikes are painted white overall and installed at the scene of a cycling death, as a memorial and a reminder that cyclists are vulnerable.

So I was a bit alarmed to spot this bike on Cotham Hill last night, as I hadn't heard of any new fatalities. But it turns out that it was put there by some students, to advertise their "Social Enterprise Project".

False alarm, then. Apparently, the bike is not white but sky blue, and symbolises 'aspiration and ethicality'. Still looks like a ghost bike to me. And, knowing the facts behind the appearance of the bike and nine others (thanks, Niall!), the thinking behind their installation seems at least muddled, and plain wrong. Fail!