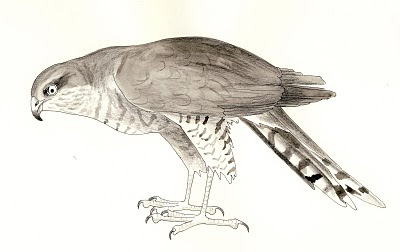 Usually when I've seen a sparrowhawk it has been a fleeting blur of deep blue, flashing through the trees or over the crest of a hill and away, before I could even say "Did you see that?"

But yesterday I was looking out of the kitchen window at the flurries of snowflakes falling slowly to the garden below, when a sparrowhawk wafted along the walls and bushes that divide the back gardens of my road from the back gardens of the next road. It perched for a while in the ash tree, then wafted back the way it came, swinging from side to side and fluffing out its wing and tail feathers to make itself big and slow, or at least slow for a sparrowhawk. It was hoping to flush out one of the small birds that come down to the gardens for the food that I and the neighbours put out; next door is very popular with the goldfinches and tits; our garden is mostly patronised by magpies, pigeons, squirrels and the occasional fox or seagull; the hooligan element of the local wildlife.

I mentioned this incident to the a chap I was having a cup of tea with, last night, when I was round at his house picking up Katie. He seemed to think it was odd to take such an interest in the local wildlife. I think that not taking an interest is a bit odd, missing out on all the creatures that don't so much share the city with us as exist in a sort of parallel space. Sometimes I try to imagine what it would be like to see this environment as they see it. Sometimes I stand on the roof and half close my eyes and imagine that I'm on a coral reef, and the birds flitting overhead or swooping through the gaps between the houses are really fish, and we're all at the bottom of a very clear ocean.

And then I come back to the surface again and get back to work.
Posted by Dru Marland at 06:58