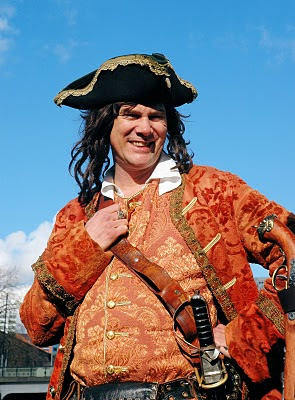 We went down to the harbour for the launch of a new book, Pirates and Privateers out of Bristol. There was shanty singing and people dressed up as pirates. There was also Matthew, the replica of the caravel in which Cabot had sailed to America. And lots of other stuff. But we didn't stay long because Katie expressed a strong antipathy for 'smelly men with beards'. Which wasn't entirely fair, but hey. She's a teenager.

Chris Bertram was wandering by with his camera while I was staring at the engine of the Traveller, contemplating wrapping some self-amalgamating tape around the radiator hose where it is beginning to split. So we had a coffee break, and he asked if I'd got anywhere with my quest to have books with transsexualism in them reclassified in the Dewey system.

I admitted that I have rather stalled on the project; I was distracted by my bike prang and then one thing and then another, and so on, and suddenly it is five months later and time to do Useful Things in the world again.

Talking about classification systems and their pitfalls and limitations, Chris asked if I knew the Borges one about animals. I didn't. So he later sent me a link. It's great.

These ambiguities, redundancies and deficiencies remind us of those which doctor Franz Kuhn attributes to a certain Chinese encyclopaedia entitled 'Celestial Empire of benevolent Knowledge'. In its remote pages it is written that the animals are divided into: (a) belonging to the emperor, (b) embalmed, (c) tame, (d) sucking pigs, (e) sirens, (f) fabulous, (g) stray dogs, (h) included in the present classification, (i) frenzied, (j) innumerable, (k) drawn with a very fine camelhair brush, (l) et cetera, (m) having just broken the water pitcher, (n) that from a long way off look like flies.