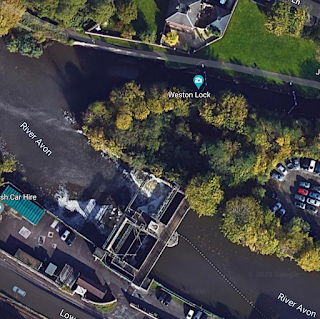 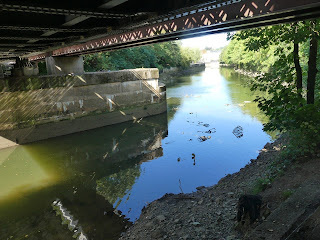 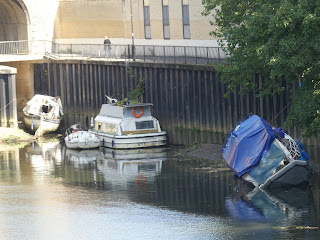 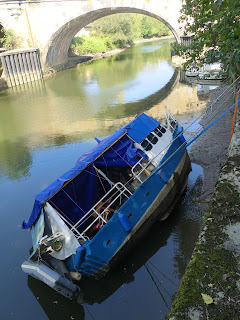 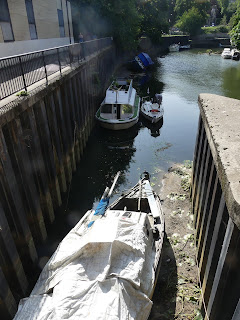 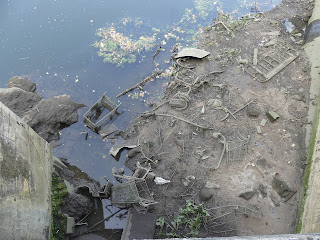 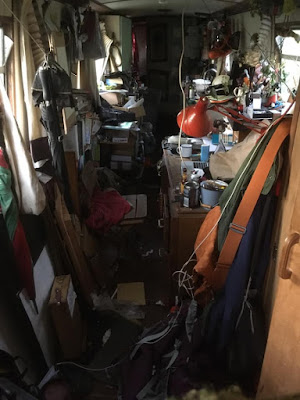 "Some are beautiful inside, like little showhomes" said the Lady Cyclist to her companion as they pedalled by; glancing at my boat, she added "...some not so much".
This is quite true of course. My Aunt Mary (actually my great aunt) was the only member of my family who might have thought that living in a showhome was something to aspire to; she had glass cases of objets, and voses, not vases. Uncle George was the model of a Northern businessman, with his Jag and sheepskin coat and cigars, and they lived together in a hacienda style bungalow called Eden Vale.
Anyway, I quite agree with William Morris that  you should 'have nothing in your house that you do not know to be useful, or believe to be beautiful.' And evidently I've got quite a lot of useful and beautiful things, if only I can find them in the clutter.
My neighbours Sebastiene and Louise are finalising their book of photos of canal life and folk. I lent them my Datacolor Spyder yesterday, so they could be sure that what they were seeing on their computer screen was exactly what would come out of the printers. It's a little device you hang over the screen and which calibrates the colour and brightness settings. Jolly handy. I got it after a printing disaster once, when the picture looked fine on my screen but came back gloomy and dark when it had been printed.
There are several ways of exactly defining what colour you mean when you say, say, Snot Green or Badger Poo Brown. They rely on RGB, or CMYK, or Pantone numbers. I've got a reproduction of an old book, Werner's Nomenclature of Colours,  which preceded these things by a longtime, and which defines colours by reference to animal, vegetable and mineral analogues. Thus Dutch Orange is the crest of a golden crested wren, a common marigold, or a streak of red orpiment. 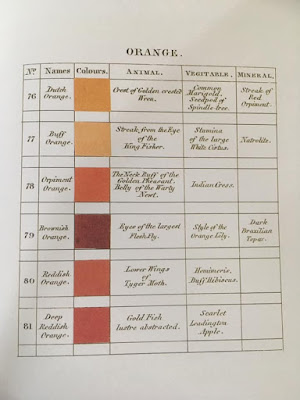 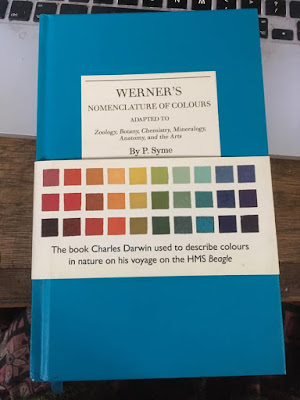 So RGB values are a bit handier for the artist on the go, or at least the artist with a computer.
Posted by Dru Marland at 14:39 No comments: 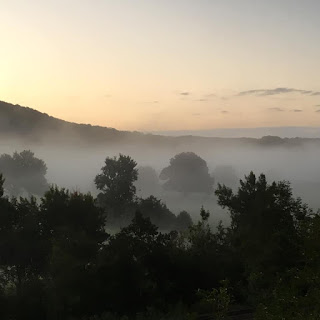 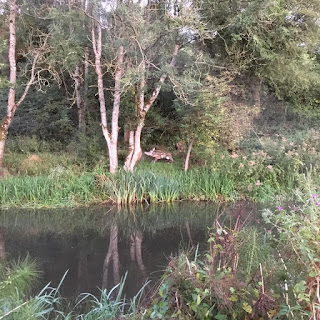 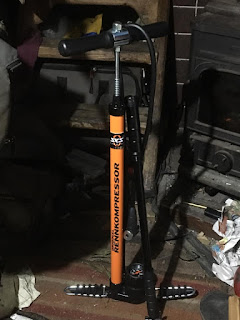 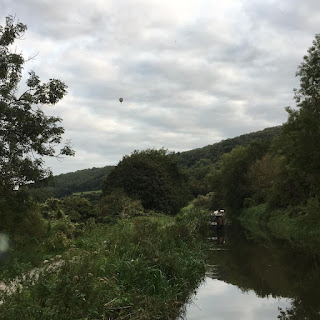 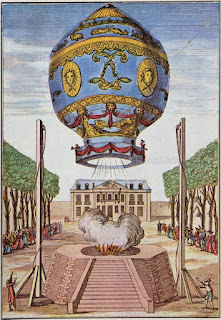 The mornings are getting chilly, and the valley floods with mist first thing in the morning. It really was time to get out and pick elderberries. No self-respecting hedgewitch, or indeed ditchwitch, could fail to get a few bottles of elderberry syrup sorted ready for winter. It's a sovereign remedy against all diseases and viruses, and if you daub it on your boat hatch the Angel of Death will move on without stopping, probably.

A lot of the elderberries have already gone over, like this sad lot here. 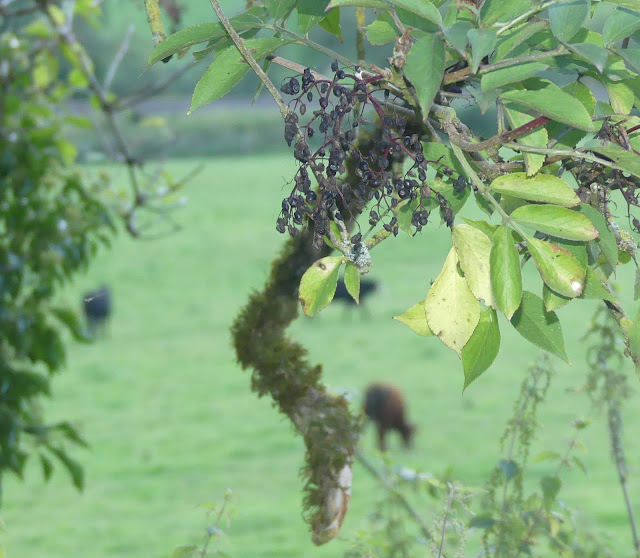 But I'd spotted a few trees that were heavy with ripe fruit, two days ago when I cycled into Bath. So I went out with my bike and a carrier bag. I was only just in time. 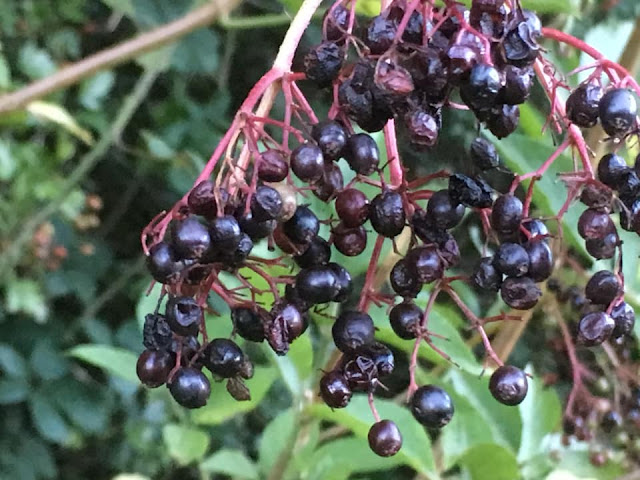 Funny how some trees' fruit ripen sooner than others; so it can be green on one tree and fully ripe on the next one. It's like the conker trees that are ranked along the roads on the Bristol Downs where we used to live. When young K was much younger, we'd go out collecting conkers in her tricycle basket, and sometimes a tree would be so burdened with them that they'd rain down. "It's heavened with conkers," she remarked once as they showered down on us. It was like a slightly less perilous version of Gloucestershire Roulette, where you stand underneath a perry pear tree and hope not to get thumped on the bonce by a pear. Pear trees are tall, and pears are hard, right up until they're soft.

The two Bathampton ravens were cronking busily in the trees, then circled for a while watching me teetering on tiptoe to grab the elderberries. 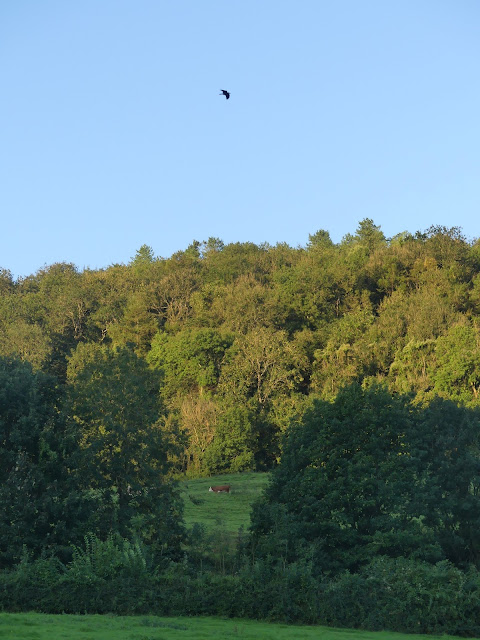 The hairy willowherb's seed pods are splitting open to reveal the herringbone pattern of the seeds. Shame you can't see it particularly well in this picture, but they are rather nice to examine 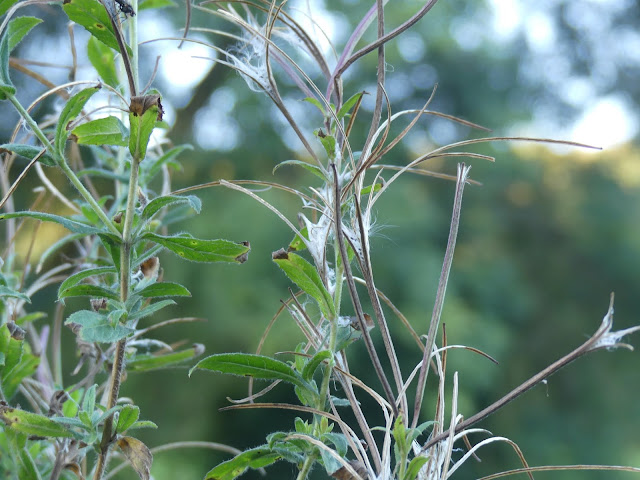 As the sun rose over the hill, the light came down into the valley, illuminating this little field and big tree and reminding me of RS Thomas' poem The Bright Field 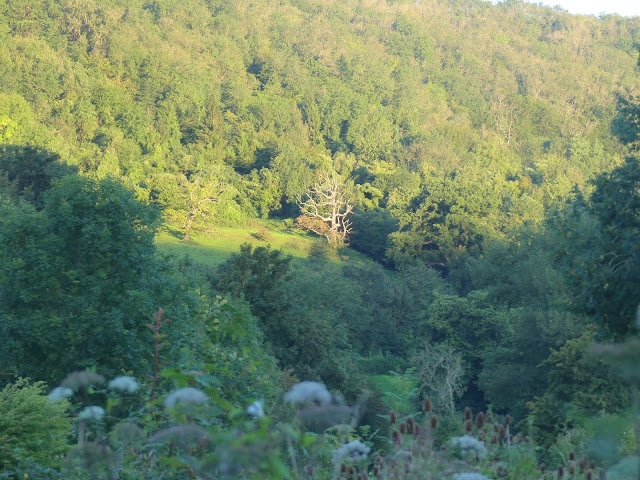 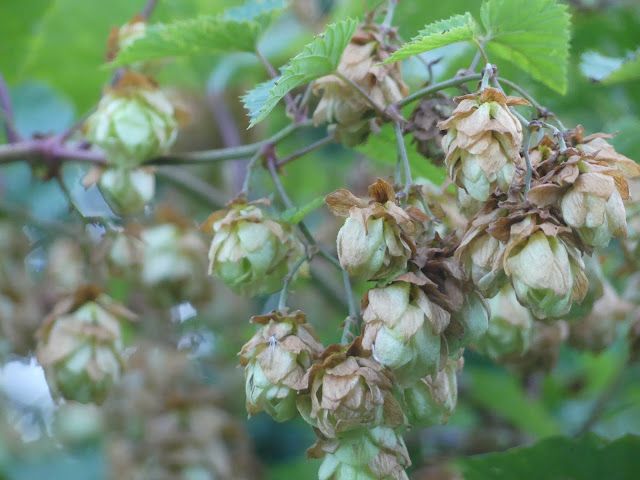 ...and the Himalayan balsam is entirely unabashed at being an invasive foreigner. The seed pods explode when you touch them. 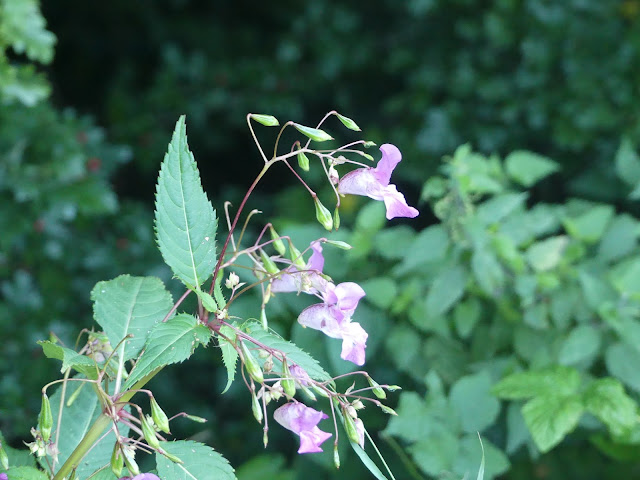 and suddenly all the hawthorn berries are ripe too 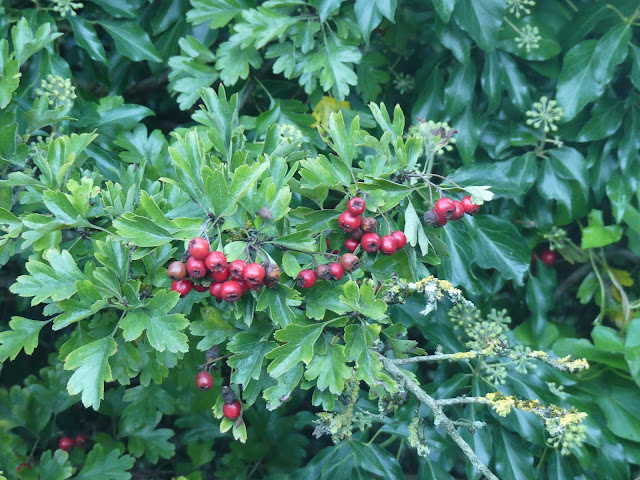 People talk about the slow pace of life on the canal. Here it is demonstrated; the reflections of the cows linger long after the cows have walked on. 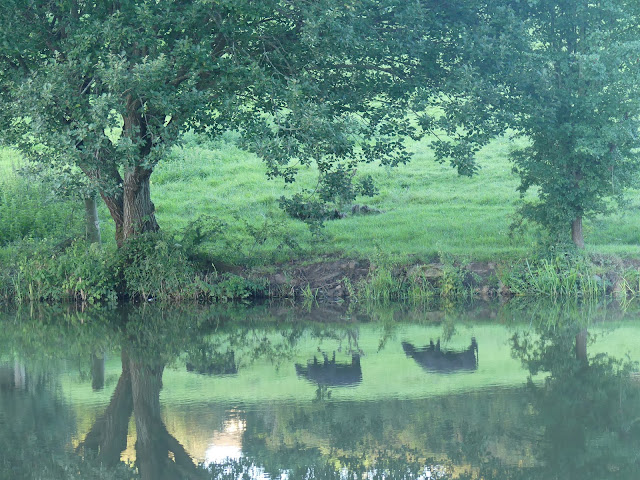 The Old Man's Beard is flowering too. On frosty mornings it shines brilliantly in the sun, and is so plentiful along the Avon valley that it looks like a second May. 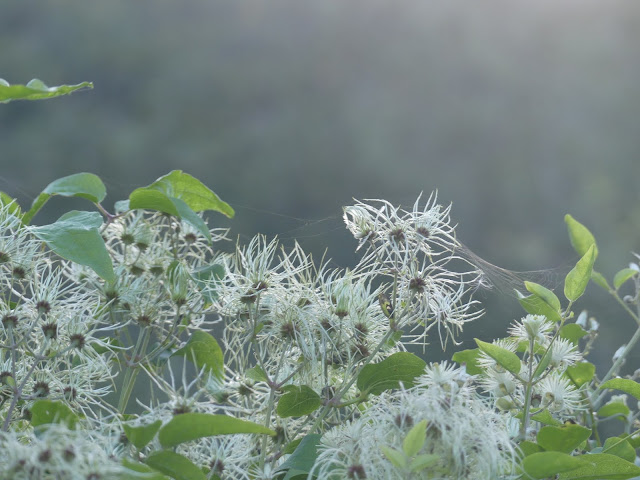 The sun reached me as I passed Warleigh, still peaceful this early in the morning. It gets heaving with daytrippers these days. 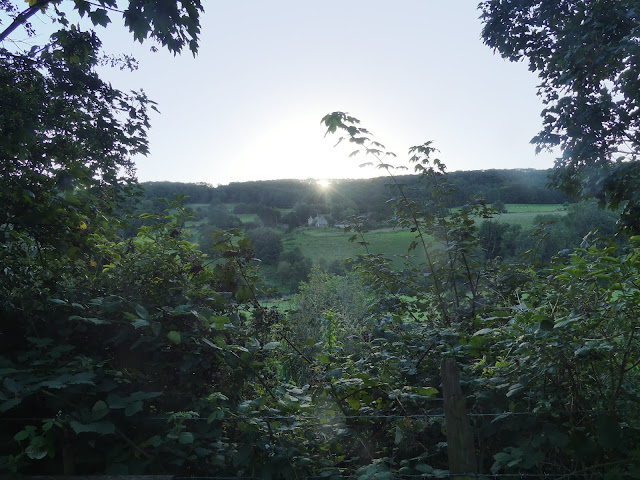 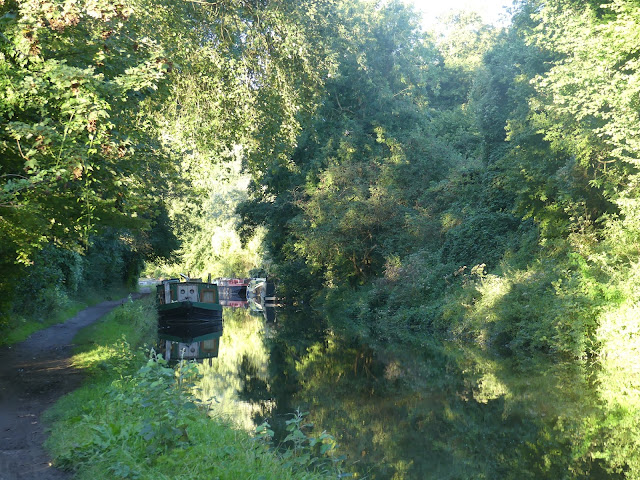 Home on Eve, and stripping the berries off the stalks. I made nearly two pints of syrup. 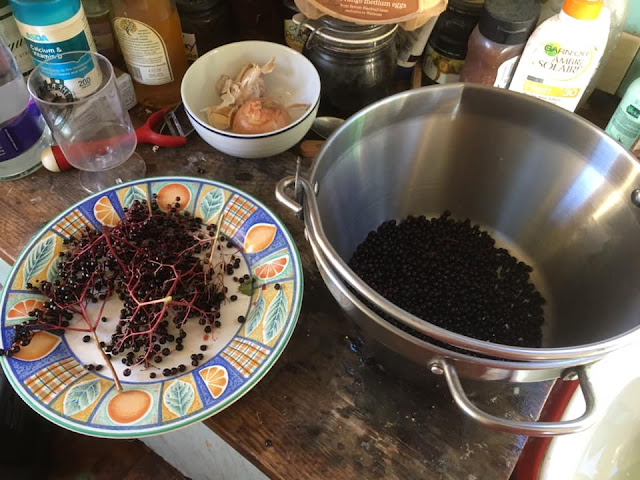