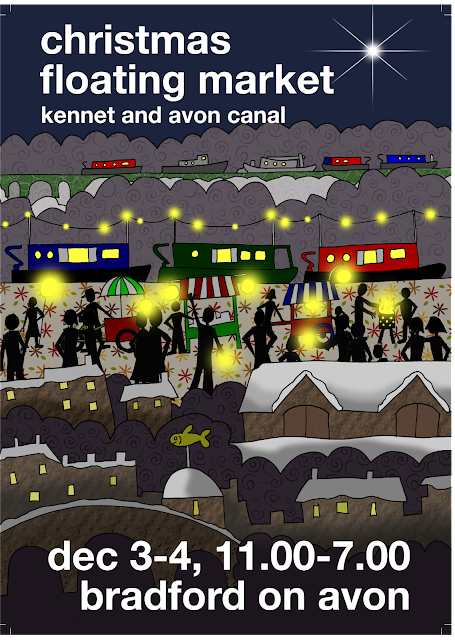 The Kennet and Avon canal traders are getting festive. Join us in Bradford on Avon on Saturday 3rd or Sunday 4th December. We'll be along the towpath below the lock, towards the tithe barn; there will also be indoor stalls at the tithe barn buildings. Enjoy mulled wine and roast chestnuts, browse handmade gifts and visit Santa in his floating grotto. Carol singing and Christmas light turn on Saturday at sunset. More details to follow.... 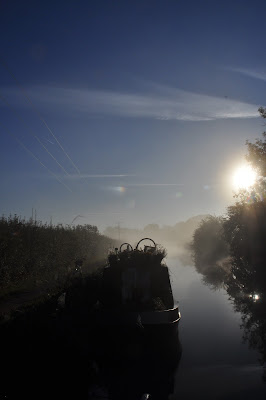 After a cold clear night with a very-nearly ground frost, the mist rose with the dawn, and then a sundog appeared; look carefully at the central part of this photo and you can see a rainbow in the cloud there. It was the second time I've seen this; the first was on May Day, and quite something.

On a smaller scale but still rather nice, there was a rainbow spectrum of colours in this spider's web too. 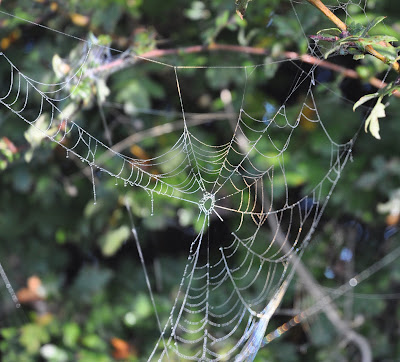 And then presently, a distrail appeared; that's when an aircraft flying through high cloud overloads the water particles, which then precipitate out leaving a clear wake behind the aircraft. The plane has just crossed the sun, in this picture, heading left to right. I understand that the conspiracy theorists believe this phenomenon to be a BLACK CHEMTRAIL, and heaven save us and protect us from the nut jobs.

By the way, I've got a poem on the fine online poetry magazine Spilling Cocoa On Martin Amis. It's about poo. Regular readers of this blog will be unsurprised. 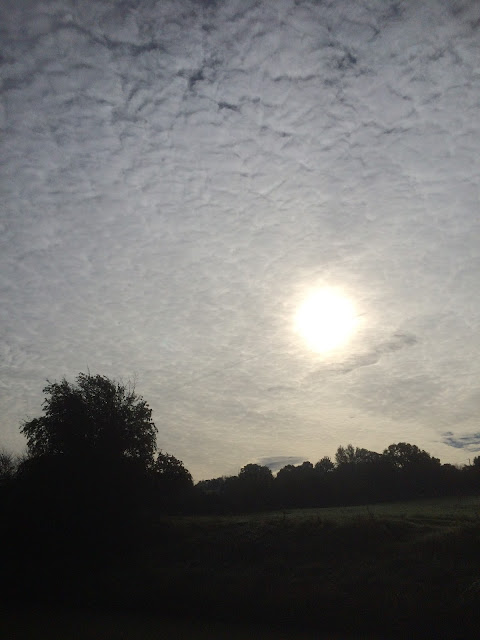 goats in their season

I've been looking for the constellations in the lower sky, which are harder to spot because you're rarely far away from the light pollution of even a distant town. I've now learned to find Lepus, the hare, and some of the stars of Capricornus, the goatfish, though I'm still waiting for the combination of clear sky and no moon to see it properly.

Was unsure whether to do this picture with an autumn landscape, or a winter one. Capricorn is of course the star sign for late December and January; but owing to the precession of the equinoxes (indeed!) now is the time that you can see it, if it can be seen at all. High in the sky around midnight, diving below the horizon some time before dawn.

Anyway, I went for the autumn landscape. As you see.

There are cards with this picture, over on my Etsy shop.
Posted by Dru Marland at 07:28 No comments: 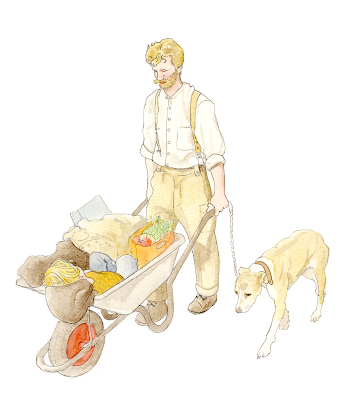 Ben Hur, 'e 'ad a chariot
and so did Boadicea
a wheelbarrow is what Ted's got
and this is what you see 'ere.

The wheelbarrow is a popular way of getting bulky stuff and small children to and from your boat, especially when the way is muddy, as it so often is on the Kennet and Avon. Ted was passing with young Alba on board the other day, and I said "Hold it right there for a minute!" as I wanted to capture just such a scene for the canal people project. So here they are. And so is Pan the dog, who came round the next day and pissed on my Workmate, while I was sitting on it. Everyone's an art critic, eh?
Posted by Dru Marland at 07:00 No comments: 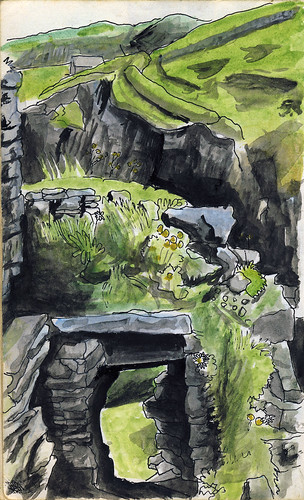 You who want your country back
waving little Union Jacks,
tenant now this plot of earth
by the accident of birth.

Greatness never yet was gained
spurning those whose need is great
spurred on by a creed of hate
spread by those with evil aims.

Nature will not take your side
when you shout ‘get off my land!”
-lines you draw upon the sand
washed out by the rising tide.


a poem for National Poetry Day. The theme this year is 'messages'. I think the poem may need a last verse, but it was breakfast time...
Posted by Dru Marland at 18:04 No comments: