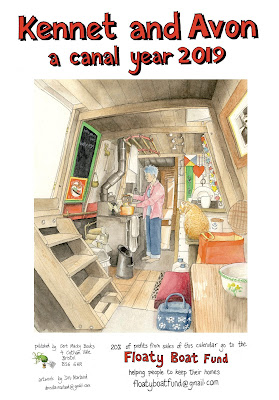 The new Kennet and Avon Canal Calendar 2019 is just back from the printers! It's full of paintings by me of life on the canal, as you can see. It costs £6.50, and 20% of the profits go to the Floaty Boat Fund, a crisis fund for distressed boaters. You can get it from my Etsy shop by clicking here, or hunt me down on the canal. I'll also be at the Floating Market in Bradford on Avon at the beginning of December. 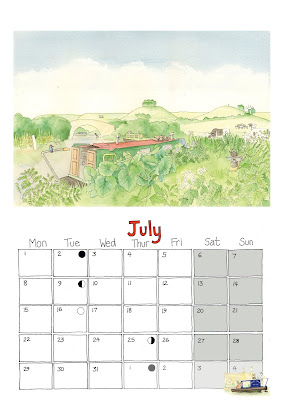 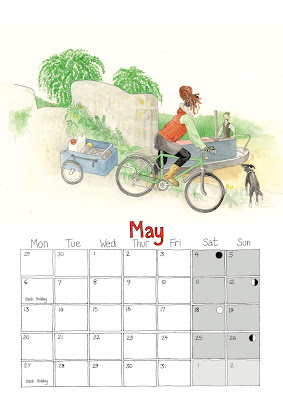 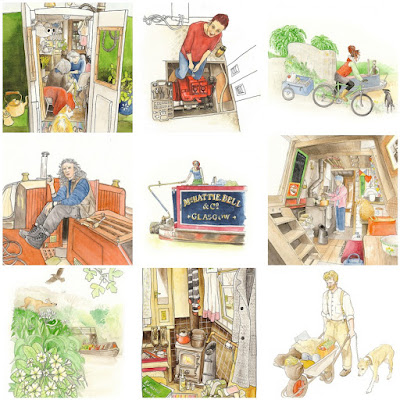 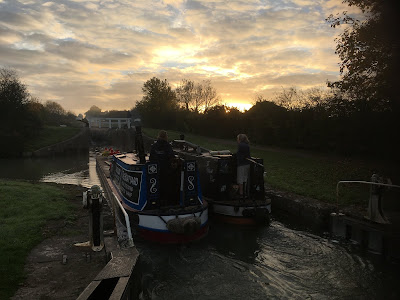 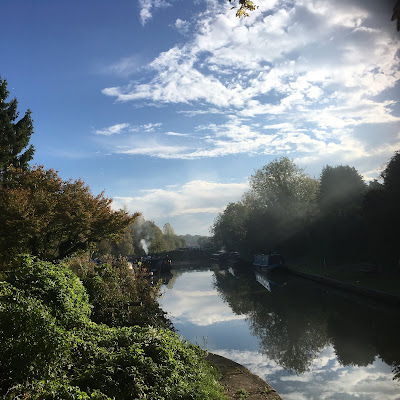 riding out the storm


Two nights ago, Storm Callum blew in. I listened to the rain rattle on the roof above my bunk, and the flapping of the lightweight tarpaulin I’d got stretched over the foredeck as a temporary cratch cover, after the old one finally fell to bits. I got up in the small hours, to check that nothing had come adrift; the windward side was battened down with a hefty lump of wood, round which I’d wound the lower end of the cover, and then weighted it down with a plank athwart the gunwales, with my big heavy toolboxes sitting on it.

A quick aside about terminology here; the cratch cover is something that shelters the welldeck at the front end of a narrowboat, and gets its name from a feeding trough; it would once have protected the fodder for the draught animal that pulled the boat. I don’t know if there’s a continuity of use there, or if it was dredged up to re-traditionalise new boats after the canal revival of the 70s and 80s. There’s lots of canal terms that are strange to someone coming from a seafaring background, as they are two distinct cultures with no great overlap.

Anyway, there’s nothing like the first proper storm of autumn to probe the weaknesses of your boat after a calm summer. And at five o’clock, there was a great crashing and flapping as the pile of plywood on the roof, draped over with another tarp and ballasted with a folded-down table, a workmate and a bicycle, was blown over the side and down between the boat and the bank. Good job the wind was southerly, I reflected as I hauled on my wellies and went out to contain the damage.

Couldn’t find the damn torch in the kerfuffle. There was a little before-dawn-lightening of the sky, enough to see to haul the bike and bits and pieces onto the bank and weight then down; in the lee of the boat, they were relatively protected. Then up onto the roof, carefully picking my way round the odds and sods scattered all over it, and I plonked a car wheel on top of the timber that hadn’t yet been blown off.

There were brief lulls throughout the day, but then the wind would get up again and again I’d check the cover, and resecure the after hatch that would insist on blowing open. It was no day for doing home improvements; just sit out the storm and make pious vows to sort out the boat properly, just as soon as I was able. I got on with a picture I’d promised to paint, and sometimes in the lulls stepped out and said hello to the neighbours, who were taking advantage of the moment to exercise their dogs, and we’d all agree that it was a bit blowy. Just the very occasional hireboat would go by, all of them with a schedule to keep and so unable to do the sensible thing and tie up to wait out the storm. One went by so fast the it nealy pulled my extra-strong mooring pins out, and Jenny leaned out of her hatch and sternly shouted to them to SLOW DOWN.

And now it’s nearly the dawn of the second day, and still the cover is flapping and rattling, and the boat rocks in the wind.

Down at Smelly Bridge, Bradford on Avon, there was more progress on George's boat. The venerable old Lister engine needed to come out for a jolly good overhaul after a week underwater; a hole was cut in the engine room deckhead, and the CRT workboat and crew kindly came along and used their crane to help lift it out. Hands across the ocean! It was good to see the local boaters and CRT folk working together. 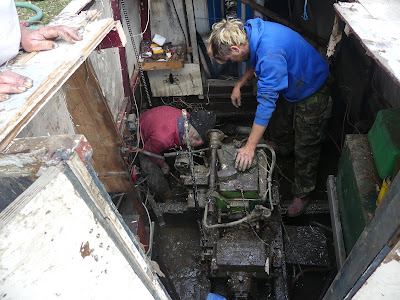 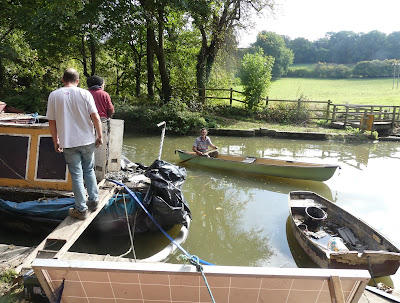 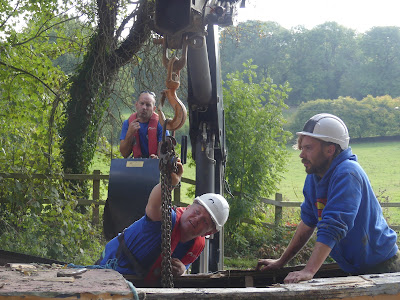 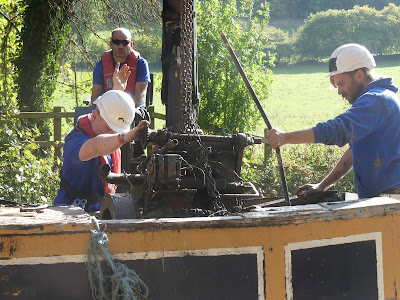 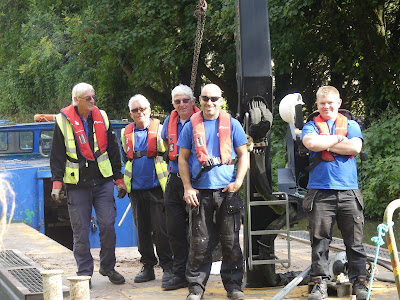 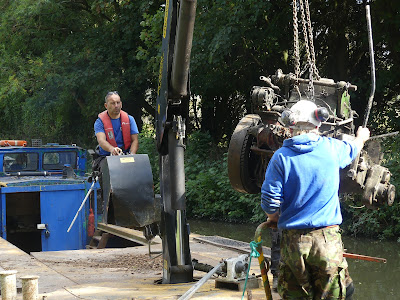 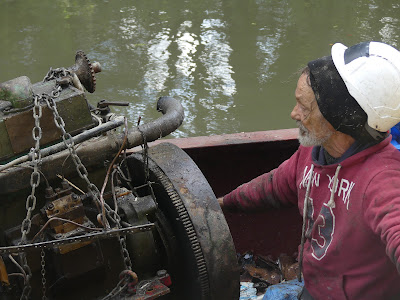 more on the sunken canal boat at Bradford on Avon 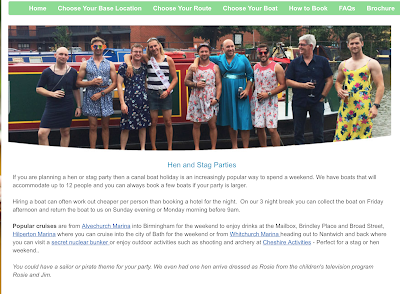 Nine days after George's boat sank at Smelly Bridge, Bradford on Avon, we heard yesterday that it had finally been refloated.

In the meantime, there was a meeting last week at which boaters, local councillors, police, and other interested parties discussed the ongoing problem of antisocial behaviour on the canal.

It was pointed out that the company which hired the boats to the men who behaved so badly that weekend, use this image (above) on their website to promote stag parties; observe how all the people in the photo are holding a drink.

It is also a matter of major concern that the hire company appeared to have no robust system in place to deal rapidly and decisively with problems; it seems that complaints had to be referred to managers at the head office, who seemed to have gone home for the weekend and left their phones switched off. Local employees may have been aware of the problem - there were complaints enough, and the police attended the boats in question -  but their hands were tied; it took over 24 hours to get to the boat and remove the troublemakers.

There is a general determination that Something Must Be Done; but that is behind the scenes for now.

It's been a rough couple of weeks on the water here; two people were badly injured in a gas explosion on the Avon in Bath. There is a crowdfunding effort to help them, here. And Jeff Green died after falling into the canal at Semington.