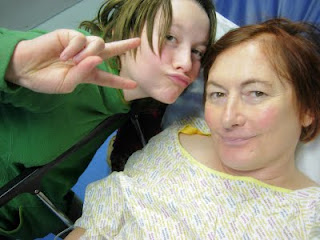 Sometimes life throws something unexpected at you.

And sometimes life kind of swoops down out of the blue, plucks you up and whirls you away to an entirely unexpected place.

I woke up at 0100 on Tuesday with pain in my stomach. It got worse, and I started vomiting, which didn't ease the pain. And it got worse. And worse. So I checked the NHS Direct website for symptoms, and the closest match to what I was experiencing seemed to be in heart attack country and I though, "No, that's not a heart attack."

So I phoned up the number and described what was happening and the helpline person said "Go to hospital", and I thought how embarrassing it would be to turn up and find out it wasn't anything important.

And I also thought of my father sitting up all night suffering the symptoms of a stroke and not doing anything about it and how that contributed to shortening his life.

So we drove through the rain to the hospital (I didn't know how long this was going to take, and I didn't want to leave Katie on her own) and got there at about 0400. The A&E department had people hunched around outside smoking or sitting in the waiting area enveloped in their own personal miseries. We waited. I was writhing by now. We went through to an examination room and I was checked over, then given a hospital gown to put on and a tube in my arm, into which someone pumped morphine. It was by now fairly apparent that I wouldn't be going home soon.

I phoned Brendagh, and she came and rescued Katie.

As the day went on, I got x-rayed and ultrasounded. The ultrasound images showed that I had gallstones, and the gall bladder was apparently inflamed. It was explained that the usual procedure in cases like this is to remove the gall bladder. So I was put in the queue for emergency ops, and went onto NBM (nil by mouth), which is very thirsty work, especially after two days, let me tell you.

I settled into life on the ward, zonked on Tramodol. There were some nice folk there. People are often at their best when their worlds are being turned upside down, or they are working in that sort of place.

Meanwhile, out in the world, people were sorting things out, and after what must have been a miserable and worrying time for Katie, she was being looked after; and the car was collected, along with the parking ticket it had picked up; and a phone charger arrived and I was finally able to talk to people again, including Richard, who had been expecting me in Birmingham that evening for a reading event at the library theatre...

I was in a different theatre the next day...

And now I've got four little sticking plasters on my abdomen, where they put the various things into me. The nice surgeons explained that my aching shoulders were a result of them inflating my abdomen with CO2, to make it easier to tinker around in there, and I decided that, while I was very grateful to them for doing it, I wasn't sure I liked to hear about the precise ins and outs of it. Must have looked v funny, all inflated, though.

"So, how are you feeling?" they asked
"Pretty good, thank you. Ready to go home... no offence..."
"None taken," they said. Beds are at a premium in the hospital.

I said some fond farewells. And set off home. And collapsed into the Guild cafe when I realised I wasn't really up to walking.

And got rescued by Brendagh.