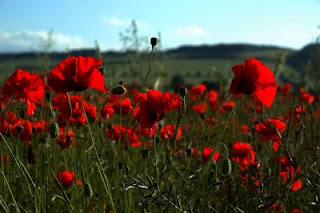 Armistice Day. At eleven o'clock, I pulled down the sash window in the kitchen and leaned out. Big Ben chimed the hour from the radio beside me, and a jay on a chimneypot on the house opposite rasped a response to the chimes. Then after the fifth chime it cocked its tail and dropped into space, unfolding its wings as it went.

Robins singing. The hum of traffic. A door slamming shut.

Then the radio came to life again.

At Newbridge Grammar School, several of the older teachers had fought in the war, though they didn't talk about it. On Armistice Day, Latin Jones, the deputy head, would give a little speech in assembly, about his time in the jungle and his dead comrades, always ending with Binyon's verse from For The Fallen:

They shall grow not old, as we that are left grow old:
Age shall not weary them, nor the years condemn.
At the going down of the sun and in the morning,
We will remember them.

Although we knew that war was definitely a Bad Thing, we were (or at least I was) ardent for some desperate glory. Fortunately, probably, that desperate glory eluded me. And now people young enough to be my children are fighting and dying.

Katie's school re-scheduled the minute's silence, as the official one coincided with their break time. So they had it at twelve o'clock, instead, and switched off their monitors for a minute.