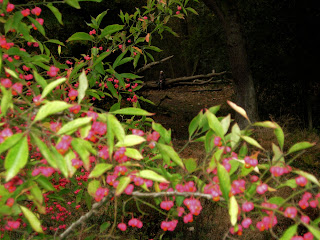 What would the world be, once bereft
Of wet and of wildness? Let them be left,
O let them be left, wildness and wet;
Long live the weeds and the wilderness yet.
Leigh Woods, on the Somerset side of the Avon Gorge, can be a bit variable in its wildness. At dawn you may meet the local wildlife, as Geraldine Taylor often has. On Friday around lunchtime, you are more likely to meet a dog walker trogging along behind her labrador with a mobile phone clamped to her head; or a jogger clad in inappropriate lycra; or indeed Brendagh and me, out for a little walk along one of the ostentatiously-waymarked paths. In our case, the Purple Trail (all-ability path, surfaced). 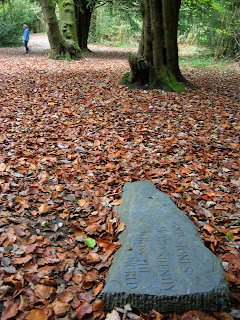 We met a stone. It's Welsh slate, carved with the words AND STONES MOVED SILENTLY ACROSS THE WORLD. It was put there by Alyson Hallet, who got the idea for it when she was up on Cadair Idris, and met an erratic boulder. And, since then, has been dumping carved rocks around the world. I feel ambivalent about this sort of thing; air-freighting rocks, and carving them so that you are imposing your idea upon them and upon the people encountering them, if you see what I mean... I was at Bristol Central Library for a reading by Alyson a couple of years ago, and she seemed very nice; but I wondered how I would feel if I came upon one of her rocks while i was out and about, and finally I did, yesterday. What I got from the experience was a vision of the bureaucracy and machinery of public art behind the positioning of this rock, here, with these words on. So... on the other hand, I really enjoyed finding some of Peter Randall-Page's sculpture embedded in the land around Drewsteignton way, especially with the prospect of a pint of Speckled Hen (or 'funky chicken') at the Drewe Arms afterwards. But that didn't seem to be trying to tell me anything. 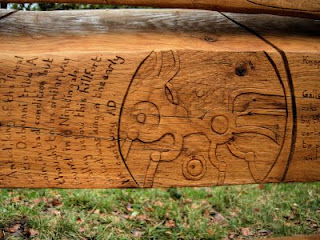 It's been a long time since I've been in this part of the woods. There has been a fair bit of woodland management going on, and for the first time I managed to get a clear view of Stokeleigh Camp, an iron age fort which, along with the one on Observatory Hill on the other side of the gorge, dominated the Avon. Last time I'd been to this bit of the woods, you couldn't see the Camp for the trees.

We scrambled over the banks and found that some Devon Red cattle had taken up their night quarters there. They've recently been introduced to the woods. We didn't see them, just the evidence of their passing. As it were.

I commented that there had been talk of clearing the trees from Observatory Hill, too. "It's always the archeologists who want to do that," said Brendagh. "It's like shaved pubes in the porny business". 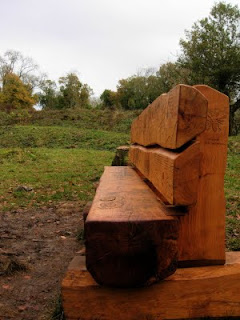 Walking to the top of the cliff, we heard a buzzard mewing from the treetops. And then a peregrine calling, down in the gorge. Slightly wild, then.