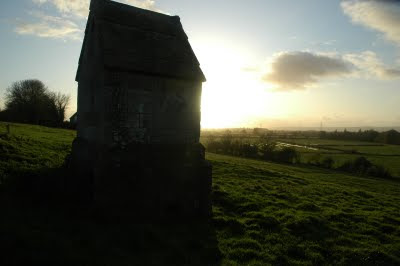 I went to the Midlands by the old road on Sunday, along the A38 from Bristol to Gloucester and then to Tewkesbury. (After Tewkesbury I cheated and took the motorway, because it gets complicated after that). I wanted to look at Llanthony Secunda, the daughter establishment of Llanthony Priory, established on the outskirts of Gloucester when the monks evacuated from the Black Mountains during one of those periodical times of troubles-with-the-natives. But first I stopped at Hempsted, a village on a sort of extended island between the Severn and the Sharpness Canal, to look at a holy well. It's marked as Lady's Well on the OS map.

It was a surprisingly peaceful spot; from the map, I'd been vaguely expecting something quite suburban. But the door on the west wall of the wellhouse was gated and locked, and the floor inside it was dry. Apparently the water had recently been channeled into a cattle trough in front of the structure, but there was no sign of it today. Though there is a cattle trough at the bottom of the hill, as you can see from the aerial photo.

There was much commotion from a large flock of jackdaws in a nearby row of trees; and to the north-east, great clouds of gulls and crows wheeling over a landfill site. But to the west the sun was declining over the Vale of Severn, a kestrel flew by, and a buzzard mewed. 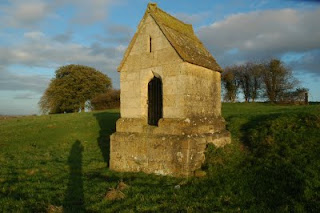 I never did find Llanthony Secunda, because I got lost in some dispiriting industrial estate instead.